While the United States suffered stressful experiences in its infancy, one man claimed fatherhood of what eventually became the United States Navy. The man in question was one other than Captain John Paul Jones, the famous Scottish-American naval commander of the USS Bonhomme Richard. During the Bonhomme Richard’s famous battle with the British ship HMS Serapis, in which Jones seemed defeated, the bellowing Captain shouted down the British with his legendary quote “I have not yet begun to fight!” Following this act of bravery, the Bonhomme Richard sank, but jutted itself into the Serapis, provoking a brutal three hour battle in which the British eventually surrendered after the USS Alliance came into battle, flanked both ships and declared an American victory. 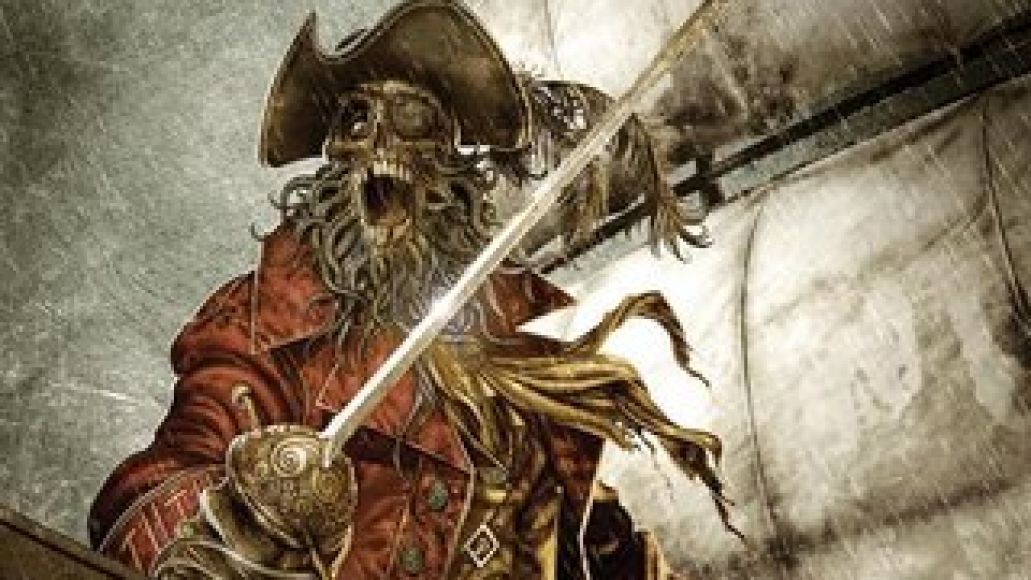 History lesson aside, one of Scotland’s recent finest exports, Alestorm, describes itself as “True Scottish Pirate Metal.” The band miraculously lives up to its name. With the release of their debut album, Captain Morgan’s Revenge, Alestorm crafts worlds of music without sounding like a train wreck…well in this case, a shipwreck. The album opens with the gripping epic “Over The Seas” and right away, visions of cannons, muskets, roped netting and crow’s nests adorn Gavin Harper’s monstrous guitars and Christopher Bowes’ keyboard mastery.

The band stays true to their pirate roots telling stories of scalawags, sea shanties, bar wenches and mutiny on the bay, all detailed in the next few cuts “Captain Morgan’s Revenge,” “The Huntsman,” “Nancy The Tavern Wench,” “Wenches & Mead” and “Death Before The Mast.” Christopher Bowes’ vocals sound like a crude and mean pirate who means business; all the best for giving the music a taste of pirate blood. If Robert Lewis Stevenson were alive and well today, he’d be pleased to see his beloved novel “Treasure Island” musically joined at the hip with Alestorm.

Musically, the band is tight and highly creative, for a bunch of barnacle-laden seamen. The production is solid, the lyrics are well written and the Scottish quartet is currently sailing the world according to their MySpace page. The album concludes with their very own version of “Flower Of Scotland”, the unofficial anthem of Scotland. Scotland and the rest of the world shall take note of these musical pirates, and Scotland should post another genius musical notch in its collective bedpost. John Paul Jones would be proud to blare “Captain Morgan’s Revenge” during the final days of the American Revolution, if given just the right time.

Check Out:
“Death Before The Mast”
“Set Sail and Conquer”