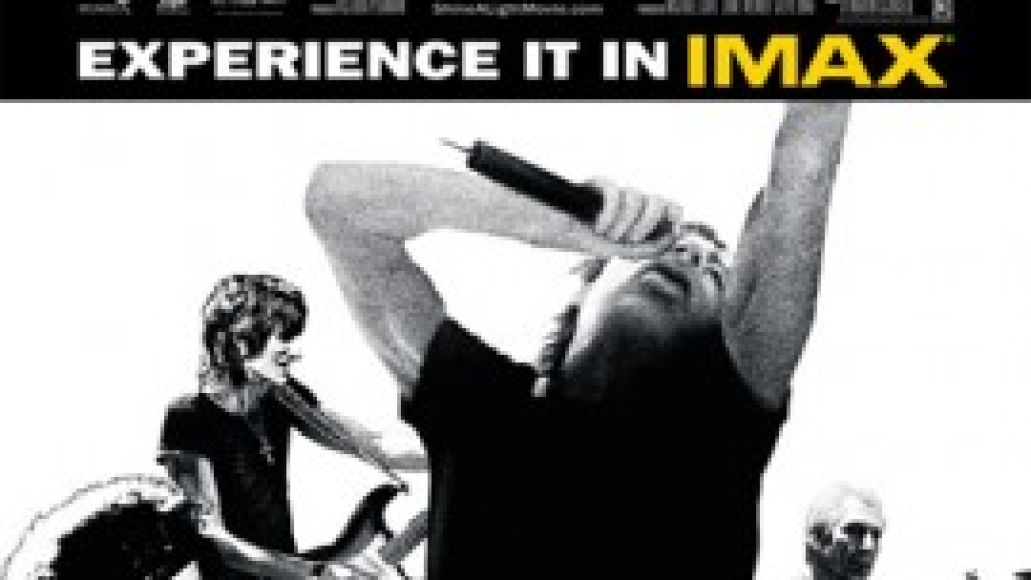 Everyone who’s anyone knows that director Martin Scorsese has a bit of a sweet spot for New York City. Even though his only Academy Award goes to a film set in the town’s rival, Boston, Massachusetts, his filmography (especially his highlights, such as Taxi Driver and Bringing Out the Dead) is layered in that New York heritage. Should this be a surprise then that the Queens-born director decided to film the legendary British act, The Rolling Stones, in the Big Apple? The answer is: no.

And to be honest, it’s one of the film’s admirable qualities. There’s something about the North Eastern city that bears no similarity to any place on Earth. There’s a character that dwells within its monolithic towers, all unrecognizable save for a select few. People are familiar with the town, even if they’ve never stepped foot on the gummy, muck infested, usually gridlocked with traffic streets. Without sounding too patriotic, New York City is home for every American… and a killer place for a rock concert. 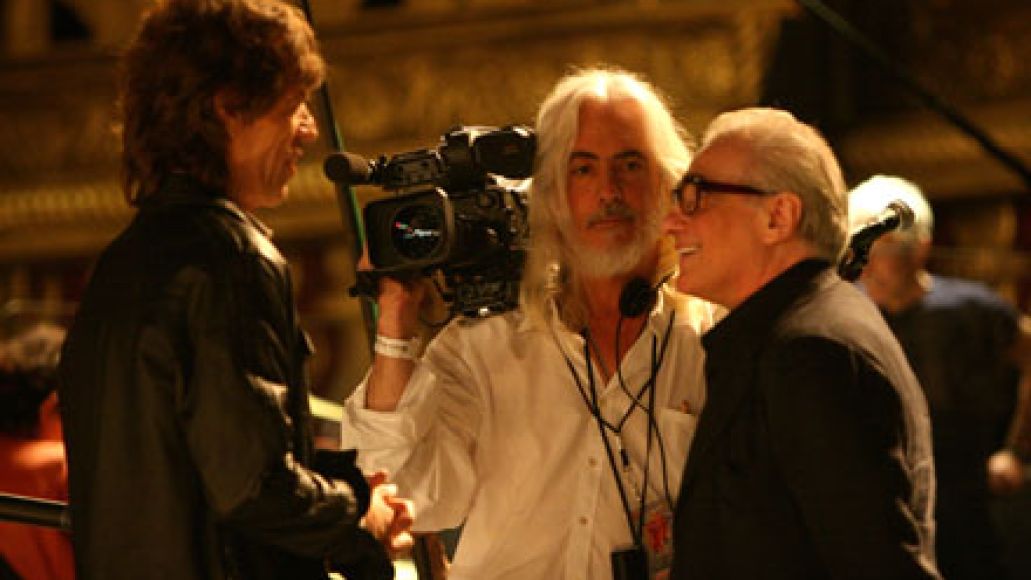 Shuffling on the stage in skin tight, jet black pants, Mick Jagger is the oldest teenager that’s legal to drink, smoke, and fool around. The smile on his face says a million different things, possibly hinting at a self reflection of his band’s forty something year legacy, all of which only takes a short glance at the thousand plus fans, waving and dancing about under the historic Beacon Theater to confirm. After a few quick takes of the pandemonium involved in such a task as capturing the band on-stage, complete with an exasperated and overwhelmed Scorsese pacing back and forth, Keith Richards, with a fish hook smile, hits the opening chords of “Jumping Jack Flash.” Within ten seconds, its quite clear that Shine a Light is one of the most enjoyable concert experiences caught on film.

The band’s set list, which considering their impressive discography, could be anyone’s guess, is fine tuned to the back catalog, separated in well known’s, known’s, and rarities. “Shattered”, the 1978 single off of Some Girls, casts aside its eighties predilections and instead, opts for a rather bar-rock, country twang that’s not necessarily bad, but nothing too memorable. Fortunately, its followed by a powerhouse, upbeat trio of “She Was Hot” (off 1983’s so-so Undercover) and “All Down The Line” (taken from ’72’s Exile on Main St.), topped with an unlikely duet between Jagger and The White Sripe’s own (or The Raconteurs, take your pick), Jack White.

One of the film’s driving forces is the wealth of documentary footage culled from the band’s past. Ranging from a short but sweet clip of Jagger on the Dick Cavett Show to various press conferences involving Richards and Ronnie Wood, the snap shot histories bleed life into an otherwise fabled band now, where by the end, the audience comes to a fascinating revelation. Behind the worn out, smiling faces of the sixty-something rockers, lie rebellious, tongue-in-cheek brats that had the world by the balls. 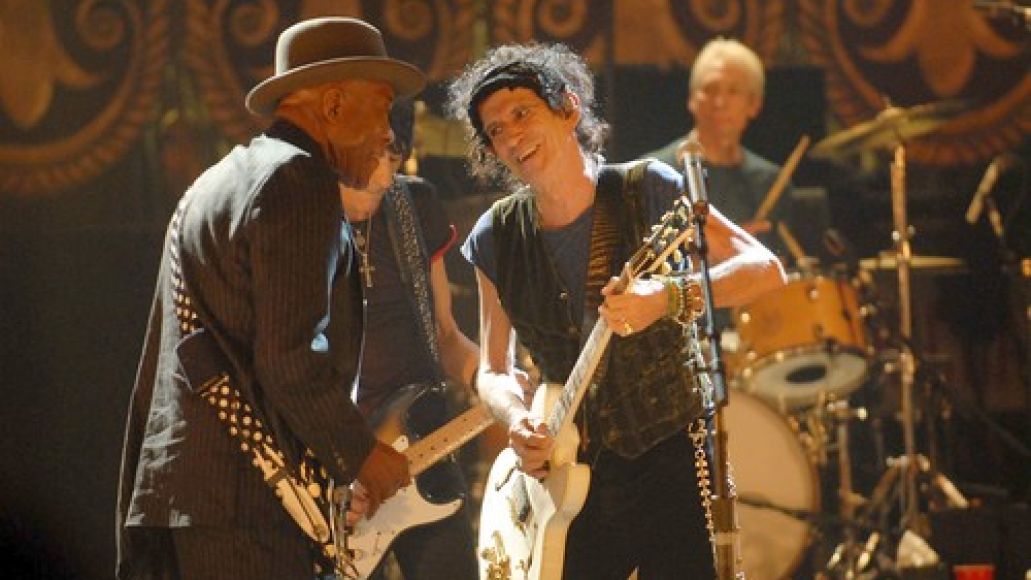 Unlike the annual MTV Video Awards, where half a dozen new age artists are paired with out of place, awkward legends, the collaborations here are all key and rewarding. Buddy Guy, who joins in on the Muddy Waters cover, “Champagne & Reefer”, is a whole other story, altogether. The intensity on Guy is breathtaking, as he stares somewhere else, his fingers never finding a moment to rest. Even Christina Aguilera brings an unabated sexiness to the classic track, “Live with Me”, dusted off from 1969’s Let It Bleed. If her 2006 double album, Back to Basics, wasn’t enough proof of the lasting effect Aguilera will have on music, than let this duet be a testament to her illustrious pull, both musically and visually (after all, I am a guy).

But let’s face it, there’s a reason the Stones are thee hottest band in rock n’ roll history (Don’t believe me? Call their financial advisor!), and its their hits. Radio can pump out “Satisfaction (I Can’t Get No)” every day, and they do, and still it will never get old. When performed live, the hit single takes on a whole new life, when Jagger struts back and forth, shaking whatever he has left on his bones, as if it’s the first time he’s performing it. “Tumbling Dice”, which could close the show easily, sneaked its way in the middle, bringing everyone in the audience to their feet, if they weren’t already. And while “Sympathy for the Devil” lacked the punch by skipping out on the one lyric that gets me every time (“I shouted out, ‘Who killed the Kennedy’s’), it still shivers the bones. 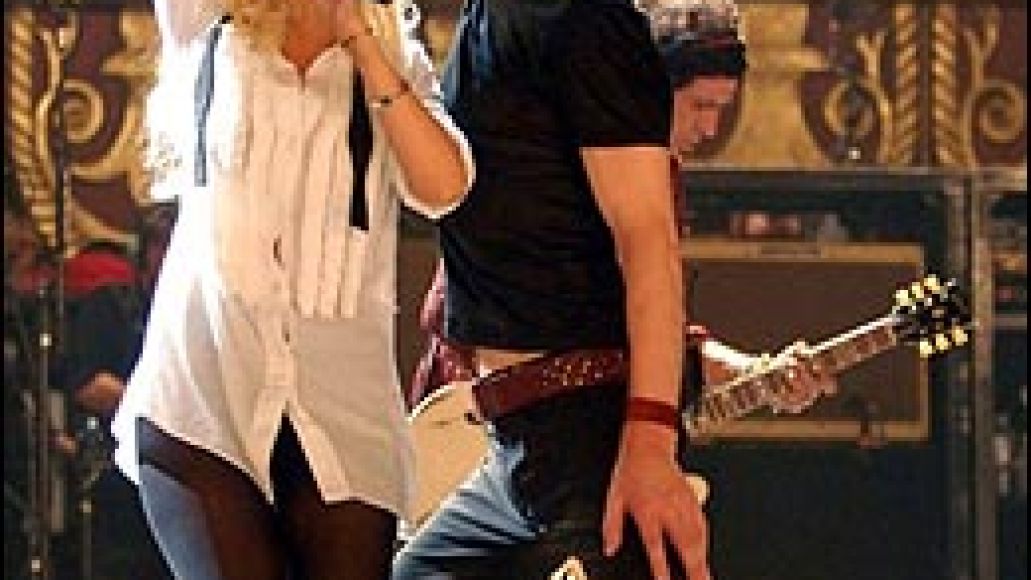 When Scorsese graces the screen again, the camera is ordered to leave the building, back through the galley, leading into the dark night that’s highlighted by the infamous city. Soon enough we’re staring from the skies above, the moon transpiring into the Stone’s trademarked tongue, and left in the shadows of the credits, all the while “Shine a Light” massages the energy still running off from the performances. Not only is the film the only place you’ll see drummer Charlie Watts do something more than flash his wicked, lizard-like smile, but its the only time the band will be intimate enough to feel like an ol’ garage rock band with a knack for expensive hooks.

Oh, and the ten dollar admission beats the four hundred plus ticket prices, too.

The Rolling Stones – Jumpin’ Jack Flash (from Shine a Light)

Check Out: Shine a Light