In our new feature, Icons of Rock, we focus on various figures in music history that may or may not have been in the spotlight. For our first icon, staff writer Blaine Sayers discusses the legendary manager of Led Zeppelin. Enjoy! -Michael Roffman

Like a scientist observing a lab experiment, Peter Grant took every imaginable step to ensure that Led Zeppelin became the biggest band the world had ever seen. Whether on stage or in a studio, Grant was always watching. The band’s on-stage performances were as legendary as their off-stage antics, yet Grant always made sure that all four members were ready to play each night. Given the lengthy touring schedules, which contained 45 shows in 50 days, with sets that would usually run over 3 hours sometimes 4, Grant’s job was no walk in the park.

In fact, most people recognize him as the fifth member of Led Zeppelin. He encouraged the boys to give the crowd what they wanted. He fought and clawed to 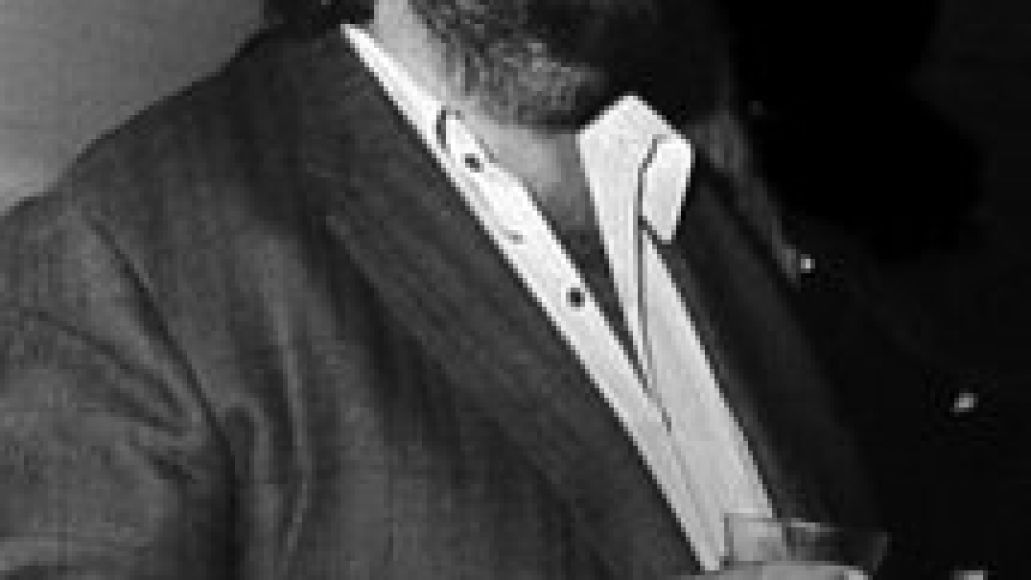 make sure that every light bulb, speaker, wire, and seat in the house was perfect. With a frame like his (250 pounds, 6’5″), Grant always got what he wanted and if there were problems, he took care of them himself. His ‘my way or no way’ approach to rock management began on the back roads and dive bars of London in the early 60s.

In the late 50s, Elvis Presley set off a rock and roll bomb with “Heartbreak Hotel.” Kids around the world, especially in Britain, were playing rock records nonstop. By the early 60s, these youths were consumed by music and demanding more. The answer came from Don Arden (below right), ‘the Al Capone of Pop’, a hardnosed music promoter who saw heaps of potential in a young Peter Grant.

Taking Grant under his wing, Arden promoted him to manage the countless, new American acts coming across the Atlantic. Showing Grant his hard edged style of management, Arden ensured artists such as Bo Diddley, Little Richard and Chuck Berry were all paid and kept out of trouble while playing in Britain. Grant learned from these wild early years to be upfront with people and to never let anyone take advantage of the artist.

From Gene Vincent’s incessant alcoholism, Chuck Berry’s penny counting, and Little Richard’s womanizing, Grant was kept very busy each night. He once stated that Vincent was the worst of the bunch: “Gene was a bit of a loony. He 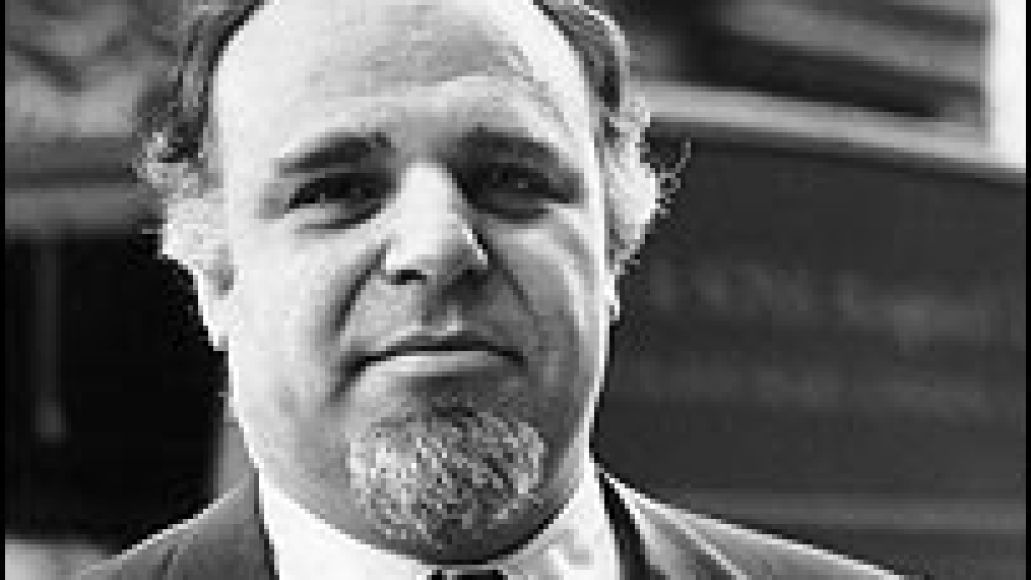 used to drive cars at me.” However, Grant could handle Vincent no matter the situation, “if the singer was being difficult and wouldn’t do a show, Grant would ‘grab him by the throat and push him on stage.'” The experience Grant gained from these early tours only prepared him for the juggernaut which was waiting, Led Zeppelin.

In 1966 a young session musician named Jimmy Page joined the blues influenced band, The Yardbirds. Along with his childhood friend Jeff Beck, The Yardbirds would tour America to packed halls and theatres. Despite such success, guitarist Jimmy Page was left wondering why he had to struggle to even pay for food. Poor management ripped the band apart and eventually Beck left the group leaving Page to assume control of the disgruntled outfit. The band’s management duties were passed on through a friend to Grant and by 1968 he was on the roads of America, touring with his new band The Yardbirds.

Recalls former Yardbird Chris Dreja: “‘The best manager we ever had was Peter Grant. Peter would almost die for his artists.'” Dreja goes on to tell a story of two mafia-linked promoters boarding The Yardbirds’ tour bus: “These two Mafioso guys with veins popping in their necks were going to kill us. They pulled a pistol on him (Peter). I’ll never forget this but he got up and he barrelled them away with his stomach. He said ‘You’re gonna do WOT?'” Once again, Grant’s massive frame would save the day and they began making money on tour, unfortunately it was far too late. Too much touring over four years left the band disgruntled and worn out; therefore, in July 1968 at Luton Technical College, The Yardbirds broke up.

The exact location of the first Led Zeppelin rehearsal has become muddled over the years. Some say it took place at Jimmy Page’s house, while others believe the four first met at a tiny space on Gerrard Street in 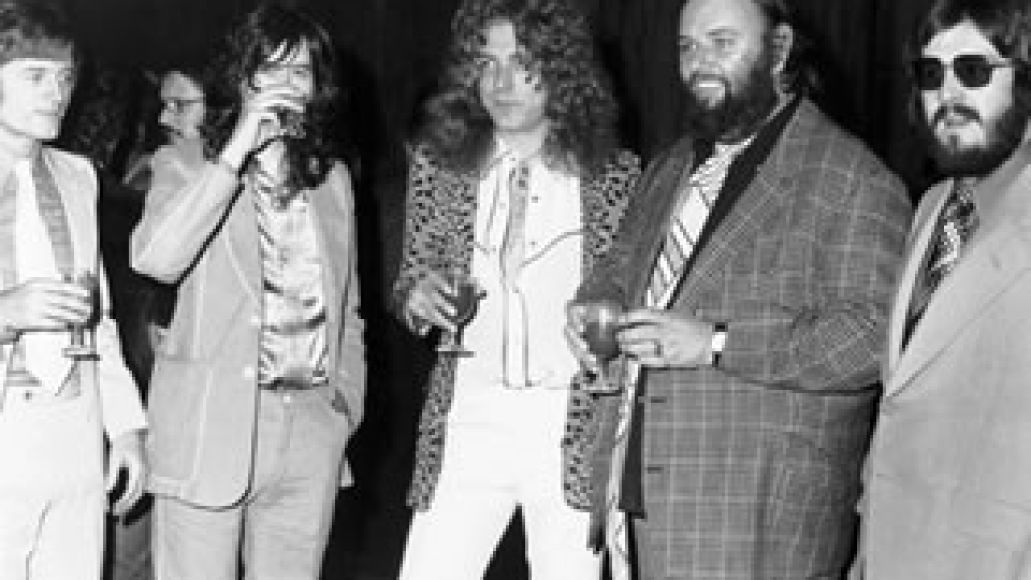 London. What is known was the first rehearsal was magical. Page knew right from the first chord that he had formed something special. With Grant’s approval and strong management presence, The New Yardbirds, as they were known at the beginning, were destined to become a rock and roll giant. Page along with Robert Plant, John ‘Bonzo’ Bonham, and John Paul Jones would set out on their first tour ever, earning 50 quid each per show. This was the start of an uphill battle as Grant’s management skills would be put to the test quickly.

On the initial tour Page had repeatedly asked Bonzo to calm down his ferocious drumming style, however the young drummer carried on until Grant stepped in:

‘Do you like the job in the band?’ he (Grant) asked coldly. ‘Well-yeah,’ said Bonham. ‘Well do as this man (Page) says-or fuck off, said Grant menacingly, adding for good measure: ‘Fucking behave yourself Bonham, or you’ll disappear-through different doors.’

Led Zeppelin was Grant’s ship right from the outset. If anyone had a problem with the band, Grant would always step in and sort them out, usually through physical or verbal punishment.

Not only did Grant use his physical presence in negotiations, but he was also a very smart business man. With a keen business sense and a strong personality, Grant was able to negotiate deals that other artists at the time only dreamed of. For instance, Zeppelin’s first record deal, with Atlantic Records, threw them a $200,000 advance before Atlantic President, Ahmet Ertegun, even saw them live. Grant did every deal with his bear claw sized hand, always shaking on everything. Though he never had a law degree or went to University, he used experience and street knowledge in negotiations.

Aside from the large advance, Zeppelin had a five year deal that allowed them full artistic control. Page and Grant made final decisions on album art, musical arrangement, singles, tours, press, etc. The band’s refusal to release Zeppelin singles lead to the band’s enormous album sales, an idea that Grant had inspired. Eventually singles would be released but only with Grant giving the thumbs up. This was a big deal, even 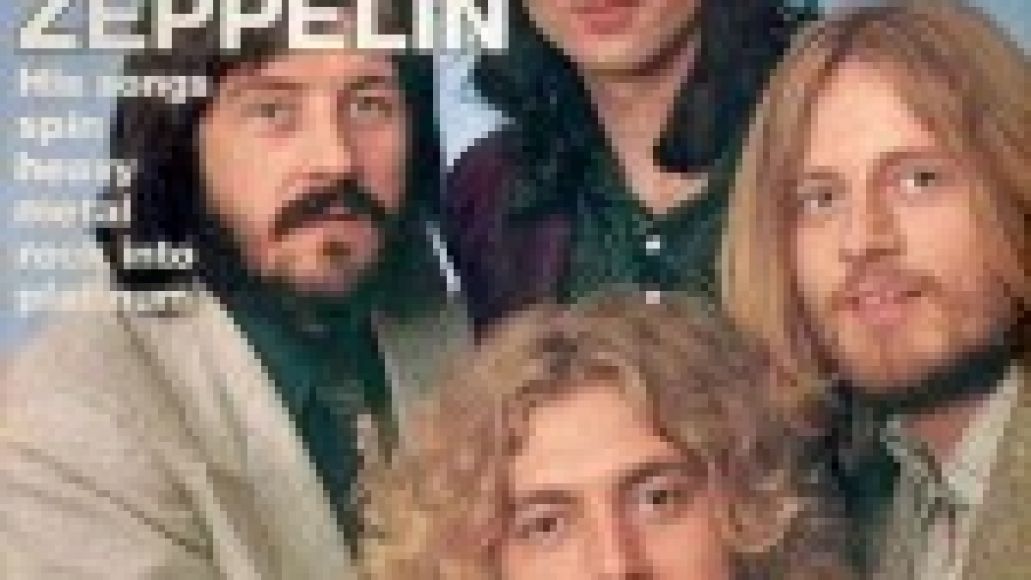 back then. Most would call this career suicide, yet Grant as per usual proved everybody wrong. Page always selected abstract album art that the record company fought about, yet any concerns were always vetoed by the deal that Grant reached with Atlantic. With the immediate success of Led Zeppelin in America, Grant did something which changed the concert business forever.

In 1969, with Zeppelin planning yet another major tour of the States, Grant told all promoters that Led Zeppelin would receive 90% of the door sales or they wouldn’t play. This had stemmed from the fact that Grant’s previous artists had been continually ripped off by promoters and managers. This ‘take it or leave it’ move would quickly make Led Zeppelin the richest band in rock and roll. He digressed on this philosophy:

“The days of the promoter giving a few quid to the group against the money take on the door are gone. Managers, agents, and promoters ran the business when the funny thing is it’s the groups who bring the people in. I thought the musicians would be the people who get the wages… That’s the way the big names are made these days. Not by the press, but by the people seeing them and making up their own minds.”

With an industry so consumed by contracts and stipulations, Grant never once had a written contract with Led Zeppelin. He didn’t need a contract to say that he managed the band, it was assumed right from the beginning. While none can argue with Zeppelin’s music being some of the greatest ever created, one must question whether they would have been so successful without Peter Grant. He ensured that the artistic integrity of Led Zeppelin was never tampered with, abusing bootleggers, counting every last penny from every ticket sold, and negotiating deals with his bare hands.

Peter Grant The Man who Led Zeppelin by Chris Welch.

The Song Remains the Same DVD

*All quotes are from Welch’s novel.