I know what you YouTubers are thinking. Has it really been ten years since Soy Bomb? Even E, the creative force behind Eels, has mused about it in song over the years: “Was it really worth it…Whatever happened to Soy Bomb?” So, in honor of SB’s tenth anniversary, this week’s YouTube Live remembers forty seconds of rock history that will live on forever in infamy…and stupidity.

I’ll set the stage. It’s the 1998 Grammy Awards. Bob Dylan is set to perform “Love Sick” live with the band from his Never-Ending Tour. This is a comeback of sorts for Dylan. He’s recovered from a potentially fatal chest infection the year before, and he’s gone on to release Time Out of Mind, his first record of new material in nearly a decade. Hell, they 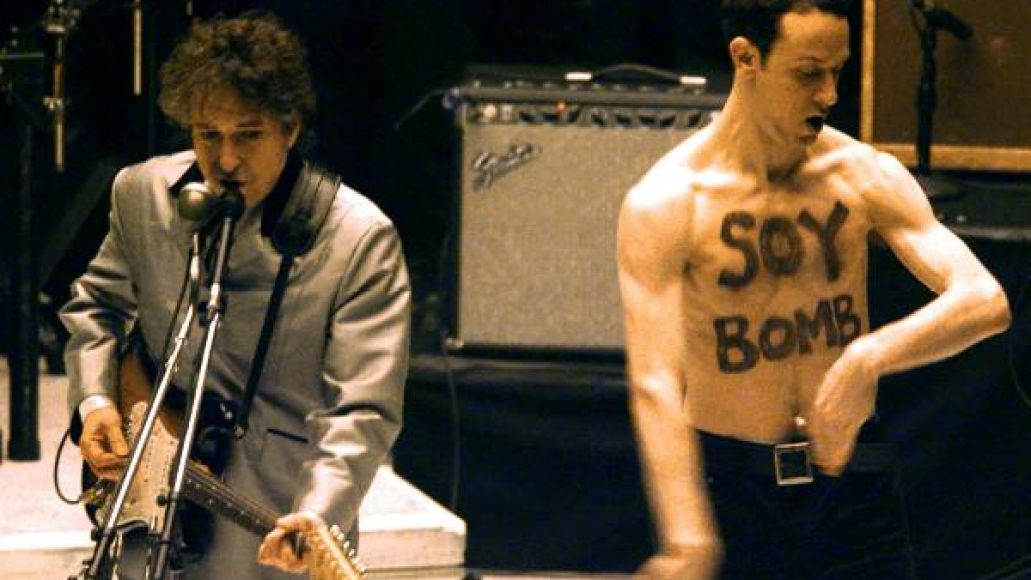 even had Frasier there to introduce him. Let’s take inventory for a moment: Live television, rocking music, a recuperated Bob Dylan, and a semi-inebriated Kelsey Grammer. What could possibly make this a more compelling broadcast?

Soy Bomb aka Michael Portnoy, like a few dozen others, was hired by the Grammies to wear a black shirt and slacks and dance in the background while Dylan performed. But Soy Bomb had other plans. Three minutes into the song, Portnoy decides to take center stage with Dylan. He rips off his shirt to reveal the words “Soy Bomb” painted in black on his chest. He begins gyrating to the music-think of a spider monkey having an epileptic seizure during mating season. Whatever image that brings to your mind, well, it looked something like that. And at this moment, it’s estimated that nearly thirty million Americans-children, grandparents, mailmen, dogs, dentists, senators, nuns, and people of every gender, race, creed, and sexual orientation-let out a collective, “What the fuck is Soy Bomb?” And humanity has been all down hill ever since.

A few things make this video noteworthy in rock and roll history. First, this is documented footage of an honest-to-goodness cool musical performance at an awards show, arguably the lamest format in television. Secondly, this is a look back at a wardrobe malfunction from the pre-Janet Jackson-exposed-milkshake era of television. Without Soy Bomb for inspiration, it’s possible you never see Janet’s nipple (at least not on network television). Finally, the terrified expression on Dylan’s face is priceless, and it’s a testament to the dedication of his Bobness that he never misses a beat. After Soy Bomb is hauled off the stage, Dylan sings the lines: “I wish I’d never met you…I’m trying to forget you.” I have a feeling Bob has never sang those words with more sincerity before or since.

So, get comfortable and get ready to once again ask, “What the fuck is Soy Bomb?” If you feel the need to fast forward, Soy Bomb can be found from 3:00-3:40.