Backed by the fluorescent glow of their lit up logo and of cheers and chants uttered by the diehard fans filling up about half of the 25,000 person capacity Nissan Pavilion, 311 took the stage as part of Washington, D.C.’s stop in the 2008 Summer Unity tour. Within seconds the opening chords of “Down” rang aloud, kicking off a trademark 311 performance – 80 minutes of greatest hits and free-flowing raps, of dueling guitar solos and turntable infused rhythms, of head banging and crowd surfing, and in the end, of a band stuck between the glories days of old and a tired act, delivering a broken record of styles and sounds.

Like so many others, 311 introduced me to the glories of rock, the anticipation of CD releases, and my first experiences of just how crazy a pit can be. Eventually, as I grew older and tastes changed, the five piece outfit from Omaha, Nebraska became more of a guilty pleasure and reminder of what used to be. Still while the days of Transistor on repeat have come and gone, I do find myself, every so often, reliving days of old, and cranking up the speakers just before that one perfect chorus.

But when it comes to 311 live, neither aging, nor changing taste buds can resist the opportunity to see the adrenaline punch sounds of rap ‘n roll up close and personal. For as many summers as I can remember, and as was the case again yesterday, July 21st, a stop to band’s closest tour date was part of my “to do” list.

The scene at Nissan Pavilion on the scorchingly hot Sunday afternoon was typical of your standard 311 show. Tailgating was the prevalent pre-show activity as most opted to dabble in the activities of underage drinking and Frisbee rather than catch the set of Joe Sumner, son of Sting, and opening act Fiction Plane. As the clocked approached 7:30, most began to make their way into the venue, leaving a mess of empty bottles sprinkled across the gravel parking lot.

Right on time, 311 compadre and billed co-headliner Snoop Dogg took the stage. Backed by a band ranging from eight to twelve members in size and a gigantic marijuana leaf hanging above, the 36-year-old, California born rapper entertained fans with a 45 minute set filled with “What’s My Names” and “Drop It Like Its Hots.” While a bit overly repetitive and glutted with shameless self-promotion, Snoop Dogg’s performance was certainly compelling and received well by a venue full of folks mostly clamoring for the band scheduled to take the stage next. 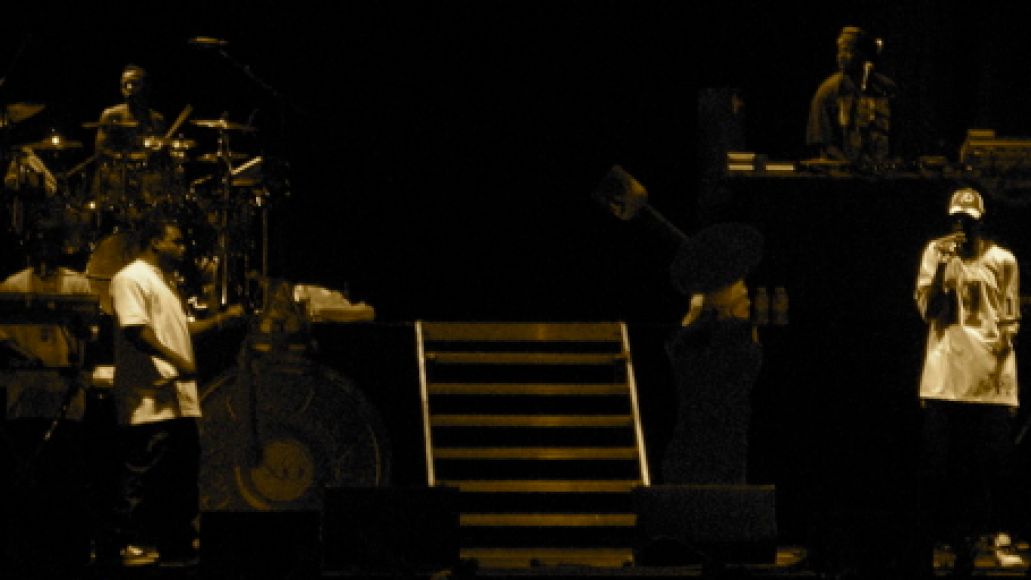 Just seconds after the last beats of Snoop’s set echoed out of Nissan Pavilion, the rain began to pour over the packed crowd making up the venue’s lawn seating. But all was forgotten, all scrambling stopped, all cries for cover hushed when Nick Hexum, SA Martinez, P-Nut, Tim Mahoney, Chad Sexton made their way onto stage. Those in the pit erupted, while those protected by the barrier of seats, responded with equal enthusiasm.

The 1999 radio-approved “Come Original” and “Do You Right”, a single off the band’s 1993 debut, Music, followed as 311 began to make their way through the Greatest Hits so many present that night had come to know and love. In fact, nothing about last night’s performance was different than any other 311 show. The hits flowed one after another. The familiar chords of “Homebrew” circulated the clamoring crowd, while the opening bass solo of “What Was I Thinking” appeared almost like clockwork.

And that was the problem. Everything was the same. Every solo could be anticipated, every call for a “jump” from Hexum was expected, even Chad Sexton’s mind numbing drum solo on “Applied Science” has been an after thought. Sure, tunes like “Beautiful Disaster” and “Creatures (For a While)” will always be a highlight, regardless of the number of times you’ve heard them played, but when fans know what will appear in the encore even before the band is finished performing their main set, when the live renditions of songs become as familiar as the recorded ones, the thrill only last so long. 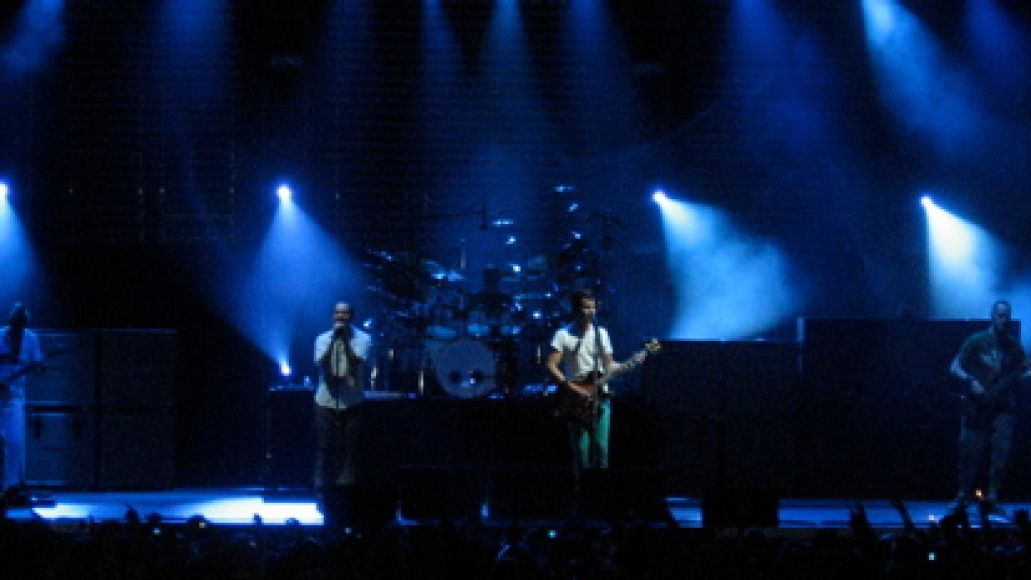 Last night, 311 neither debuted new material from their upcoming album, nor played anything from their most recent one, 2005’s Don’t Tread on Me. Instead, they went with the flow, performing the same hits in the same way as they always have. While the diehards, overcome half by love and half by intoxication, might not notice at first, eventually, when your concerts become as predictable as your album, even the biggest of fans can’t help but notice. 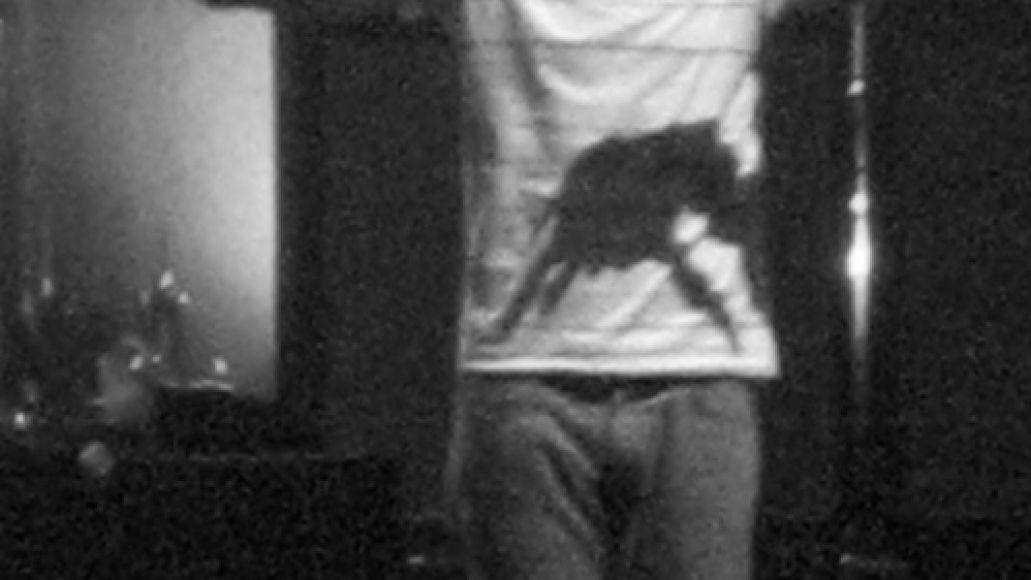 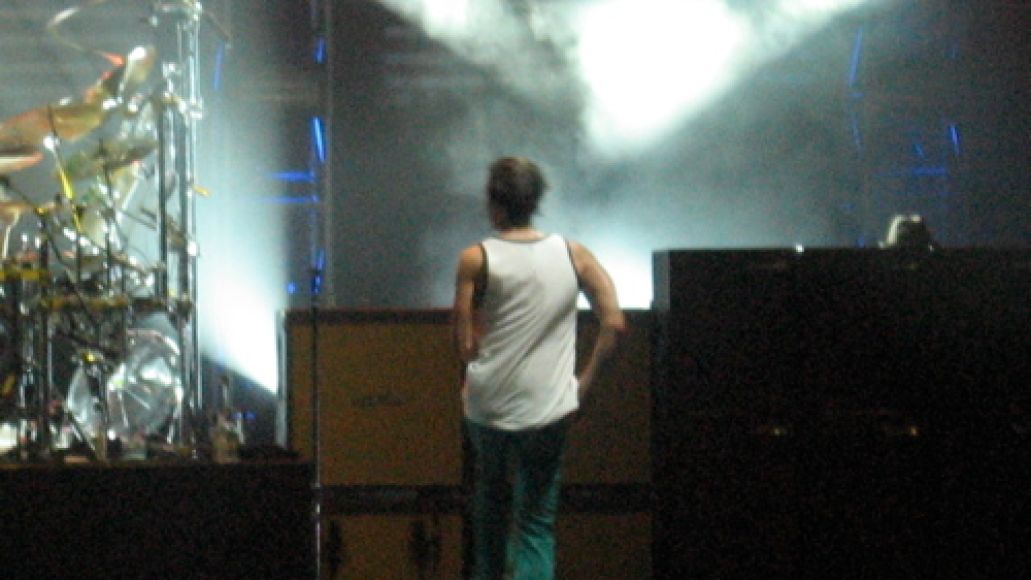 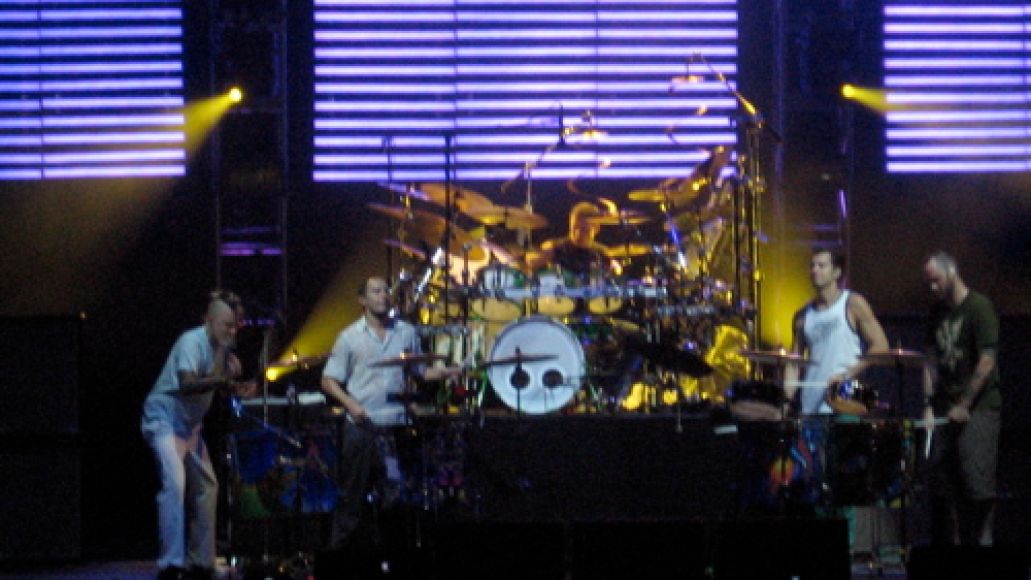