It’s inevitable as humans that we grow, we experience, we document and we live through change. The biggest paradox we’ve developed as a species is that the only constant thing that exists throughout our lives is the presence of change. It’s an invisible wave that we either ride a hang ten over or drown in its undertow. The UK based garage rocking youths, The Subways, have found a way to keep riding the wave of change without faltering under the sophomore slump as well as drowning in the deep end. 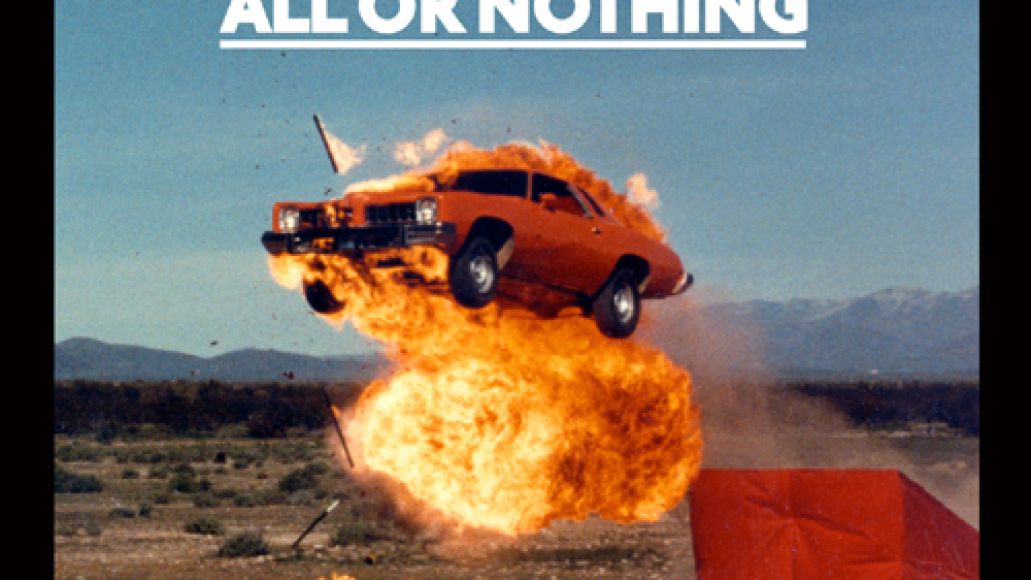 With the success of their first record, 2005’s Young For Eternity, the band experienced a multitude of acclaim. Even for their young age, the band tapped into something soulful, heavy, and pure. Their second offering All Or Nothing picks up where the Hertfordshire trio left off with the heavy metal inspired, door kicker “Girls & Boys.” Guitarist Billy Lunn’s guitar tone has grown from fuzzy garage to full on blitzkrieg borderline metal and Charlotte Cooper’s bass has gotten much more complicated. From the first listen, it is apparent the trio have avoided the sophomore slump and continued to blaze a path of glory. The next two tunes “Kalifornia” and “Alright” continue in the same garage rock/heavy metal onslaught with breaks of nicely done acoustic passages. Lunn crunches his way through “Kalifornia” with the help of Cooper’s backing vocals and the end result is nothing short of amazement. This also has a lot to do with the production. Legendary producer Butch Vig, who commanded the legendary Nevermind by Nirvana, takes the reins of this record and truly pulls out every musical nuance that can be extracted. The end result is crispy, fresh, full and nothing short of magnificent.

One of the album’s highlights “Alright” shows the band’s poppy, 70’s influenced garage rock roots. Here the trio take it down a notch and show they’re not afraid of putting out a beautifully crafted pop song, straight from the heart of the British themselves. Much like their contemporaries The Kooks, The Subways have found a way to sit behind the curve ball and continue to pull out magical tricks one right after the other. Another cut that shows the band’s rise above the change wave is “Move To Newlyn” where Lunn sings more of a recollection of beautiful memories than just lyrics off a piece of paper. Charlotte Cooper’s soulful vocals intertwine and wave sweet passages of wonderfully crafted Brit-rock. Not since The Jam have an English trio sounded so powerful with what seems to be so little musical instrumentation.

The next few rockers certainly reach farther than expected. The self titled “All Or Nothing,” the rocker “I Won’t Let You Down” and the White Stripes influenced “Turnaround” all mesh well together and certainly will please any pub rocker or moshing punk starlet. I could go on, but the rest of this album certainly is a surprising treat with a ton of great things. This by far surpasses Young For Eternity, much like in the vein of The Godfather Part II and (hopefully) The Dark Knight.

The Subways are riding higher and higher, growing with each song and showing their true talents that weren’t present on the first record. There’s nothing but optimism that this band will continue to grow and create some of the best music from this decade. If this truly is, “All Or Nothing,” then The Subways should be delighted to know they’ve pushed farther than ever and come up with some truly spectacular.

Album Review: The Subways - All Or Nothing