The only way to sum up Blink-182 would have to be this: the culmination of any 13 year old pop-punk girls being. A friend of mine said it best, “With my blue hair and my short friend in tow, they were my boy band.” Fast, lewd, and crude, with youthful rebellion just edgy enough for suburbia to handle, Mark Hoppus, Tom DeLong, and Travis Barker were the skater punk dreams of high school boys and girls everywhere looking for that pop-punk outlet. They were the perfect excuse to go ballistic at a show for those rejecting the teenie-bop craze, and for many of my peers, they provided that first life changing live experience.

It was late on a full moon night when this album came up on that same friend’s car stereo and much to my amazement, almost a decade after having seen Blink-182, she was able to reenact the record word for word. She is not alone in this. At every song break you can hear the loud piercing squeals from the adolescent audience. “You just can’t beat the enthusiasm of a teenage girl,” she said as we rolled into a late night drive through. Recorded on November 4, 1999 in San Francisco, this is the now split trio’s only live album. Just a million copies were made when it was finally released almost a year later on November 7, 2000, and has since continued to be a valued piece for any Blink fans collection. 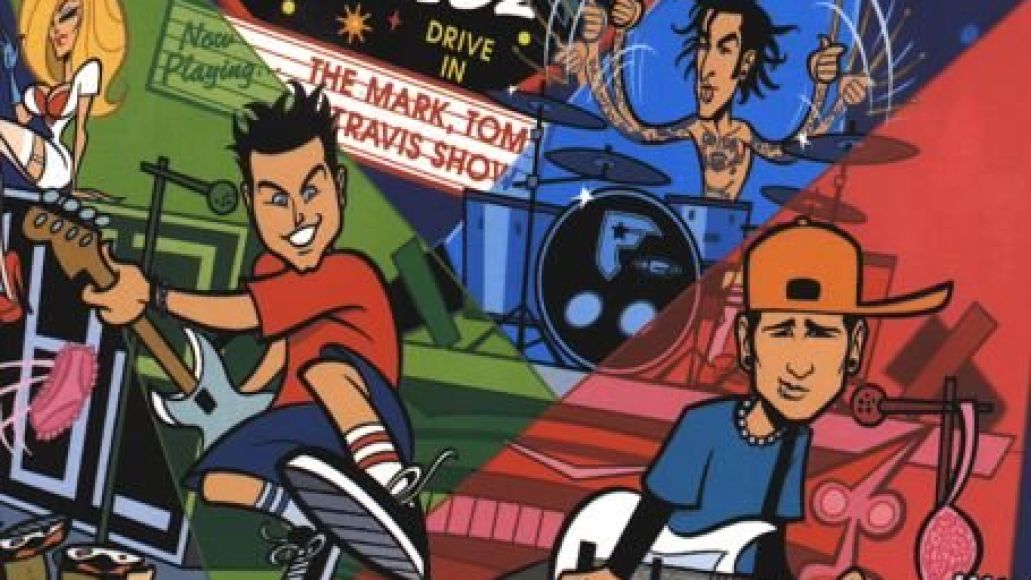 The set list is made up of songs from the band’s first three studio albums, Cheshire Cat, Dude Ranch, and Enema of the State, with an emphasis on the latter given that it was just released. At 49 tracks long, its about as ridiculous as live recordings come, combining their lightning fast playing with their classic on stage banter that made all the girls scream, and all the parents that bought the tickets blush. No dad wants to hear his daughter get excited over fellatio. Not all the album is music, however. Twenty-nine of those tracks are part of a collective known as “Words of Wisdom” and include an appearance by Satan (Tom DeLong with a voice changer), and more blow-job and sex jokes than you can shake a stick at.

In the timeless teenage tradition of offending parents and pushing the boundaries, the live recording gives us the first appearance of their now infamously immature songs “Family Reunion”, “Blow Job”, and “The Country Song”.  At no longer than one minute, each one of these songs expand George Carlin’s seven words you can’t say to about a dozen or more, and end with the incest and mother “loving” that Blink-182 does so well. Having been taped right before their big explosion into the mainstream, the record captures perfectly who Blink-182 were musically, and antics a side, the performance is fun and energetic, providing anyone who were fans of the band with a wonderful dose of nostalgia, and probably the only highlight of their middle school years. The record also includes the bands hits “All the Small Things”, “Dammit”, and the suicidal anthem “Adam’s Song”. If you yourself were not into the band, you know someone who was, and the tour that this recording is from sold out many large venues for a good reason. They knew how to write catchy punk rock with more on stage energy than I have seen to date.

Since the break up of the band in 2005, the members have gone on with their more “grown up” side projects such as the Warped Tour headliner Angels and Airwaves, as well as +44. With the end of this band came an end to the rambunctious and mischievous pop punk that they poured into the suburban headphones of teenage Americana at the turn of the millennium. The fans have grown up and moved on, but whenever this record sneaks through the shuffle, you can’t help but get excited and ask, “What’s my age again?”