I’ll start by saying that this opportunity truly defines why one gets into the business of music journalism – having a chance to speak with favorite artists on a personal level.

Harvey Danger, who made their major radio debut in 1998 with “Flagpole Sitta”, have been lingering off and on in a “dimly lit apartment” of independent artists for the past 10 years.  Between side projects, a brief hiatus, and a three-album selection of songs ranging from alternative and grunge to folk and piano balladry, these guys have rendered pure musical bliss for those with an ear that can succumb to F. Scott Fitzgerald references and poetic lyrics.

At 9:30PM Eastern, Sean Nelson – the lead vocalist for Harvey Danger – was preparing to board a flight to London on holiday.  As luck would have it, he allowed me an over-the-phone interview.  Sadly, due to his plane leaving, it was cut short (to be continued in a week’s time), but I was able to snag a few answers and opinions.

As the discussion began, he seemed a little unaware of who had called him until I mentioned that I was with CoS, so afterwards it appeared to ring a bell.  In talking about his trip to London, he had this to say:

“I’m going on holiday, probably catch a few R.E.M. shows.  (in reference to R.E.M.s new album) I got a chance to listen to it in a way not many people have.  Mike Mills and I were talking, I had already had some wine so I was primed for a performance.  He played the entirety of it right there…I really enjoyed it.”

On that note, I decided to move toward his band, Harvey Danger.

During the time between King James Version (September 2000) and an EP titled Sometimes You Have To Work On Christmas (Sometimes) (September 2004), the group had broken up – according to Nelson, there was a lot of “expected anger and frustration” fueled by the music industry and between the band members.  They were expected to produce a hit after their alt-rock radio standard, “Flagpole Sitta” was chanted amongst all of late 90s America.  Pressure ensued, and they parted ways before giving us a full-length album entitled, Little by little… in 2005, and released it as a completely free download before the likes of Radiohead or Girl Talk.

In asking about file sharing, Nelson had this to say:

“It’s the direction technology has gone.  We chose to embrace it, because there isn’t a lot of demand for a new album, so this gave people a chance to listen to it.”

According to the Harvey Danger website, there is a link explaining their reasons for releasing Little by little… in this fashion.  It reads:

“We realize that digital files are the primary means by which a huge segment of the population is exposed to new music; we also believe that plenty of music lovers in the world will buy a record once they’ve heard it – whether via radio or computer.

We also believe there’s an inherent qualitative difference at work—not only between MP3s and CDs, but between clicking a mouse and finding a record on the shelves of a good record store. These experiences are not mutually exclusive – they’re interdependent facets of music fandom, and equally important considerations for a band in our position.”

In lieu of that method, I recall downloading this album before purchasing a physical copy – the physical version containing a bonus disc of unreleased material, and a viable motivator for buying said album. 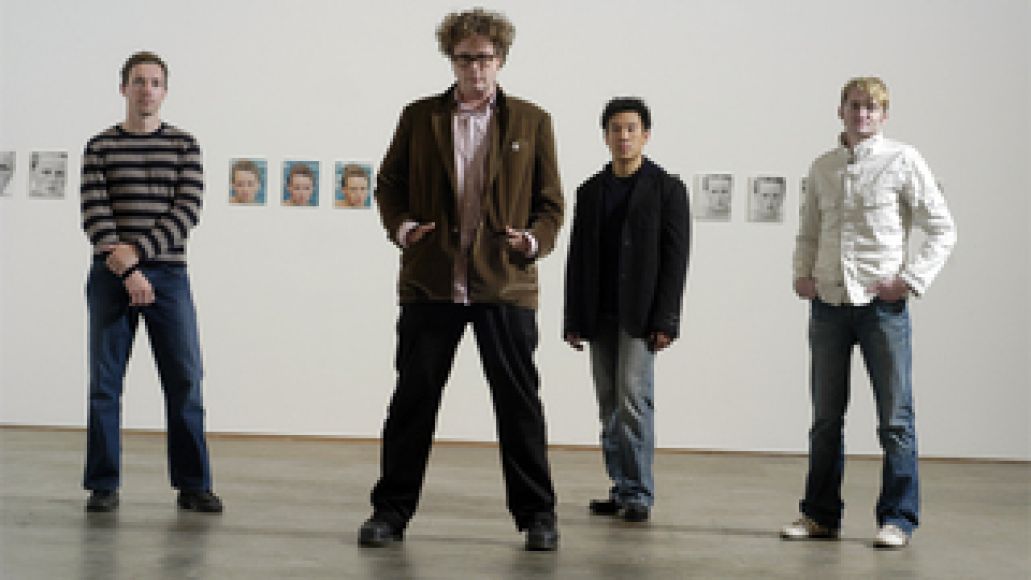 Continuing forward, I was intrigued to note Sean Nelson’s various classic music influences – one of which is not what you typically hear these days:

“[Joni Mitchell’s] Court and Spark was one of the first records I can remember hearing, and it’s always been an influence.  People like Joni Mitchell, The Beatles, The [Rolling] Stones, The Kinks, The Smiths, you could say they almost invented the language of pop/rock.  I know The Beatles are mentioned often, but…Lennon and McCartney really did something.  They made songs as if they were addressed to you, and made you think you could do it, too.”

“I don’t dislike any of them.  Where Have All The Merrymakers Gone? has a naive charm about it…it was basically us finding our way..”

(A magazine once wrote that if “Where Have All The Merrymakers Gone? was an angry kid kicking over a trash can, then Little by little… was that same kid all grown up, taking out the trash and paying the bills.”)

“King James Version was psychologically profound…there was pressure to record, and we began discovering and seeing what the music industry was and what it REALLY was.  Little by little… might be a bit stayed – the 5 piano songs we did might be the best we’ve ever done, and the 5 guitar songs perhaps a little less killer.  I’m not sure why.”

Sean Nelson also contributed to Continuum book – a series titled 33 & 1/3 – about great rock-n-roll LPs, in regards to Joni Mitchell’s Court and Spark (which I picked up at a used CD store following this interview).  Nelson has also been working on a project titled Nelson Does Nilsson, where he covered Harry Nilsson recordings.  Being that what it is, I got another quote about musical influences:

After some mild chit-chat, we had to part ways due to his flight and the phone having no charger to plug into in transit.  As it stands, I will be continuing this interview in the coming week or so.

Please stay tuned – and be sure to give these guys a listen, you won’t be disappointed.