It was a cold winter night the last time I had the chance to see Aesop Rock with Rob Sonic and DJ Big Wiz, the man behind the beats on last years None Shall Pass. I was in the small mountain town of Durango, Colorado at our own version of a club venue, the Abby Theater. Thanks to that atmosphere (or lack there of at 7,000 feet) and the near riot that people caused by sneaking in to the long sold out show made it one huge whiskey fueled party. With that wonderful and slightly hazy memory in tow, my excitement was high for last night’s show in the nation’s capital. While different in setting, Aesop and crew delivered again, but this time to a crowd of people ready for the weekend even though it was only Wednesday. 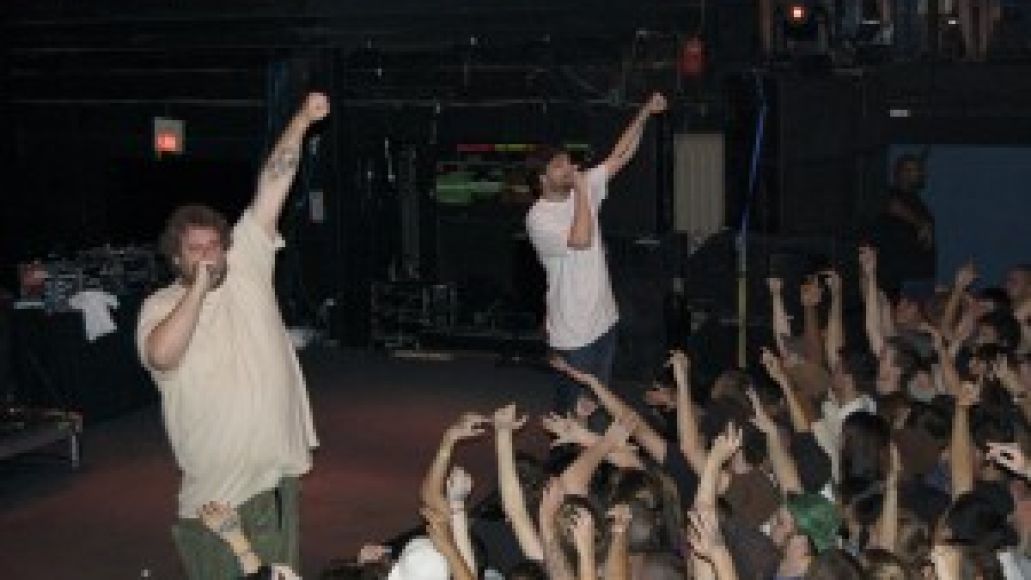 What separates a good hip-hop show from a great one is the energy of the crowd. What could have been an amazing, hands in the air, head bouncing time, turned out to reflect the over worked mood of the night. Aesop brought light to this at one point when he asked the audience “who worked today?” Everyone cried out, at which point he surveyed again, “Now who hates their job?” The club grew even louder. 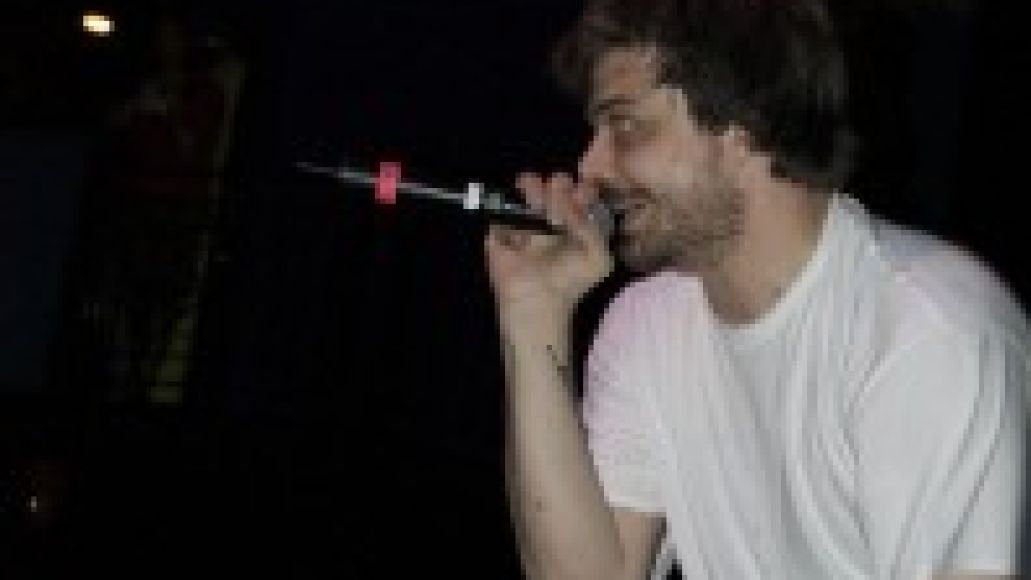 Opening with the first track off of None Shall Pass, “Keep Off the Lawn” ushered in a night that would play mostly off the latest record in which Aesop has been supporting for almost a year now. The rhymes flowed smoothly over the familiar beats as Big Wiz threw in his improvisational skills when needed, even getting an extended solo at the end of the night in which he created a beat from scratch, layering different pieces together for one large climax that was very impressive. Aesop and Rob’s lyrics were speedy yet audible, never tiring as they ran through “Coffee”, my personal favorite “Catacomb Kids”, and the ode to the pirate life “The Harbor is Yours”. It was at this song break that Aesop showed his love for the mid week hard working folks that made it out. He asked around for who had the worst job, then related by mentioning how he had worked as a button maker, manufacturing the stop-release buttons on buses. It was also a special show for him being that his parents made the trip out, at which point he apologized for all the cursing both before that point and after. It gave a great sense of humanity to a man that could have otherwise gone the common route of egomaniac.

After about six or so songs, Aesop ventured deeper into his catalogue hitting tracks from his 2001 record Labor Days, as well as other previous albums. One earlier song being the deeper and more thought provoking “Daylight”. Opener, and Queens, NY native Yak Ballz made an appearance on “Getaway Car”, adding his own explosive personality to the already magnetic track. By this point the energy in the audience had stepped it up a notch as proper liquid motivation had probably set in by that point. As with all shows however, when alcohol and high energy mix, fights happen. There were a few quick moments of violence in the front row that was just as soon squashed thanks to those patrons who stepped in to keep the peace. 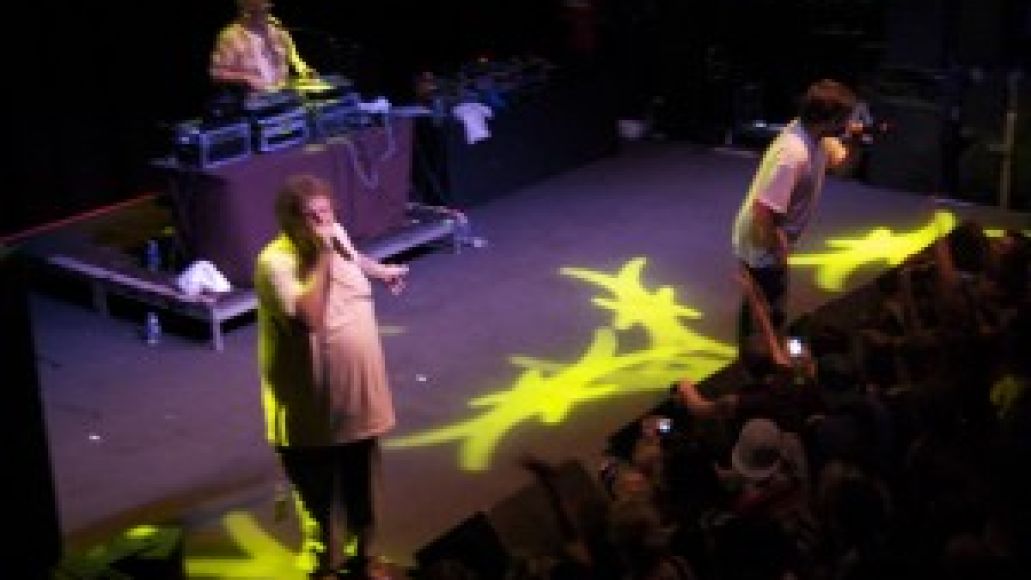 After “Fumes”, Aesop showed off his lyrical and a cappella skills for a moment that allowed us to focus on his words and be reminded why we were all there. Aesop, out of all of underground hip hop today, uses some of the most unique literary devises and metaphors with in his rhymes that make you scratch your head until his point of view sinks in. It all makes sense in some strange way. “Citronella” brought back the beat and had everyone yelling out “KILL TELEVISION!!!”. To close out the evening, “None Shall Pass” rang out as the crowd’s favorite, and one last time got the floor jumping and calling the chorus back. 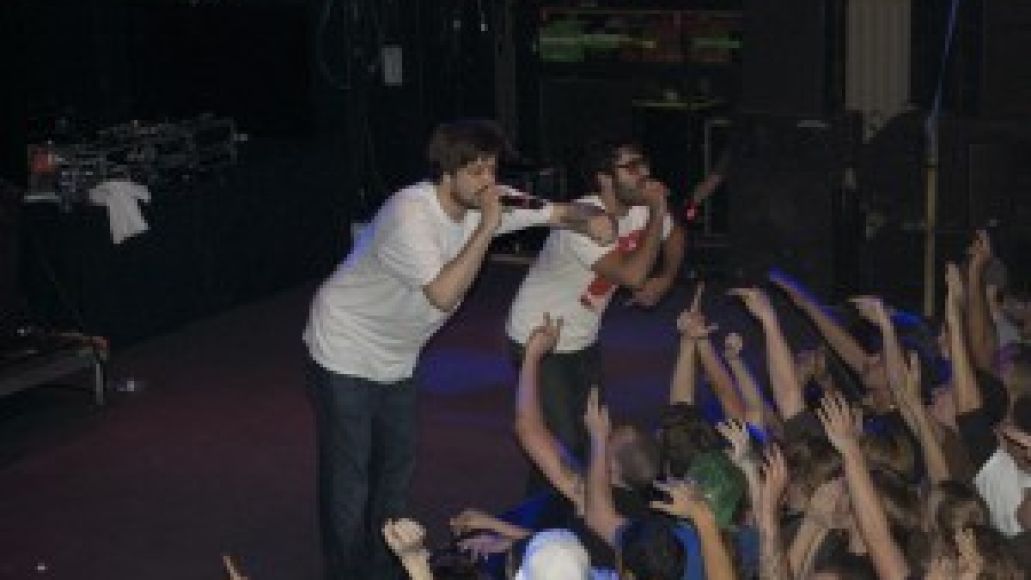 Just as Aesop and crew walked off, the nearly packed audience wanted more and called the man back on stage. Requests were yelled out, and Aes obliged with an improvised rendition of “Lucy”. It was a great night for hip-hop, but as I looked around the 9:30 Club throughout the show, I couldn’t help but notice the dead faces from all but those on the floor. This put a damper on the possible energy that could have come from the stage, an energy that I know is there, but was relying on a little more feed back from the fans. However, Aesop will return, as he always does to his favorite club, so hopefully next time everyone gets some “Coffee” before hand.

Special thanks to photo contributions by Priscilla Raba.