Everyone knows the music industry is somewhat in the shitter, creatively and monetarily. And w 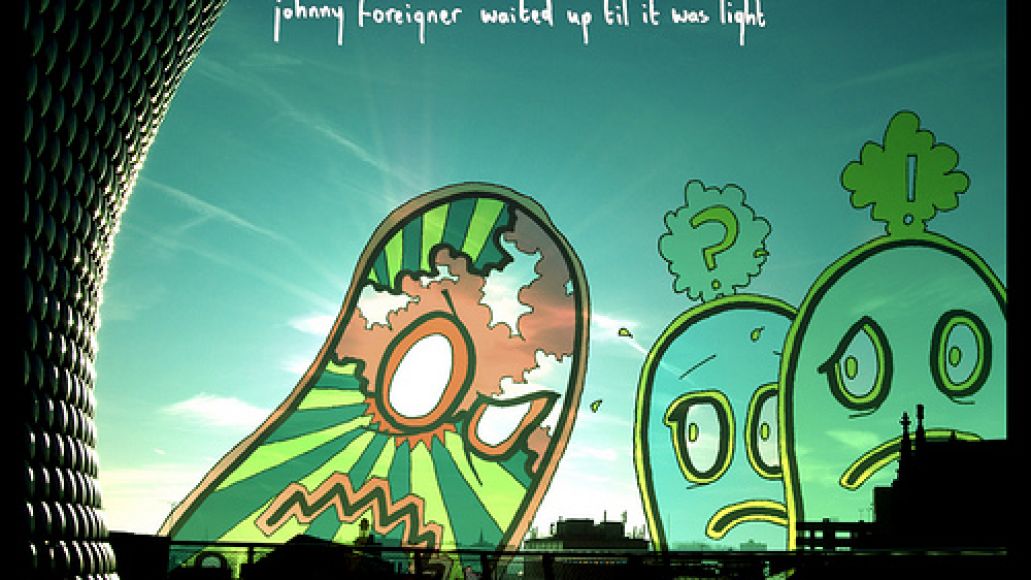 hile that is sad, after listening to this album, you can only hope that the very worst of new music on the radio was up to the quality of Johnny Foreigner. What does that say of the band? It’s clearly not music you want to listen to all the time, but easily listenable for even the most jaded music fan.

Waited Up ‘Til It Was Light is an indie pop album, but with some pretty interesting things. First, the band is a multi-colored trio (like pasta), so that’s something a little new for the people who were getting tired of all white, British indie bands. Second, the album is in glorious stereo-surround. The reason this is brought up is that basically every song fully lets you know this; it is a sonically intriguing album. There is left to right switches, harmonious backup singing, changes from electronic instruments to their real counterparts and sound filters aplenty. Basically, this band will pull anything out of the proverbial toolbox to make a song better or at least different.

“Cranes and Cranes and Cranes and Cranes” is the band’s somewhat hit and that’s understandable, as  it’s a pop song filled with chord bending, hand claps, vocal work by every band member and a chorus that’s hidden deep within. This is one of the more fun songs on the album, actually. It’s high-energy fun ’til the end, where the listener is treated to the classic “everybody fuck around and make noise on their instrument until we decide to end the track”.

The first track on the album, “Lea Room”, is a decent opener. With a nice little synth opening, leading into a very punk influenced song structure, you can’t fault the band for putting an enjoyable ditty at the beginning. The standout track for the post-modernist music fan is “Salt, Pepa, and Spinderella.” The song features nonsensical lyrics to anyone except the band, which include “Are you hungry now?”(repeated twice), so that’s always a plus. But, Johnny Foreigner doesn’t stop there; instead, they go back and forth between two of the members of the band, with Kelly Southern, the lady of the band, providing “do-doo-doo” vocal backups. Oh, and that’s not all. In addition to the vocal exchanges, the song also switches from drum machine to real drums midway through, and fittingly after the “lead” singer says, “Bring out the real fun, turn on the real drums.”

Overall, Waited Up ‘Til It Was Light, at first listen, is pretty generic. It’s fun, it’s what you hope radio music becomes, but with further musical investigation, the album has some more depth. Johnny Foreigner is clearly a band of more than competent musicians, instrumentalists that understand song structure, have fun making music, and are willing to experiment with any trick that they can think of, both in the recording and mixing of the album.  Something must also be said for the purely artistic side of the band. The album cover is very simple but highly interesting and for anyone looking to read the funniest song titles in recent memory, enjoy these: “Yes! You Talk Too Fast”, “DJ’s Get Doubts”, “Yr All Just Jealous” and the last track on the album, “The Hidden Song at the End of the Record.” That is worth half a star just by itself.

Basically, sample a few of the songs on the album, skip getting the whole album, grab a few of the choicer tracks, put them on your “On-the-Go” playlist via iTunes and imagine a better time, when this could be the worst thing you might hear on the radio. Plus, if you can’t laugh at a British indie-pop band titling a song “Salt, Pepa, and Spinderella”, what can you laugh at?

Check Out:
“Our Bipolar Friends”

Album Review: Johnny Foreigner - Waited Up 'til It Was Light