Day two continued with the great weather, and even came with a few surprises and disappointments. After finally getting some helpful parking, Black Rebel Motorcycle Club was first up after the strange and offensive opening set by Book the Band winners, Hollywood Undead. No one knew how to take these frauds as they  stopped performing at times, only to reveal that a backing track was doing all the work. It was a cruel joke that cheated people out of possible performances by Phantom Planet, We Are Scientists, and even The Virgins. I won’t go into that any further as I am sure the attendees have plenty to say.

BMRC were much busier live, and provided a great soundtrack to recovering from the night before. The south stage was much more indie-centric early on with back to back performances by violinist (really a multi-instrumentalist) Andrew Bird, and the duo of M. Ward and actress Zooey Deschanel, also known as She and Him. Andrew Bird provided great, light, alt-folk Americana as he traded violin for guitar several times a song, as well as helped out with the percussion and xylophone. Most impressive, however, was his whistling as he could hold a note between his lips and carry a tune for several minutes without breaking. 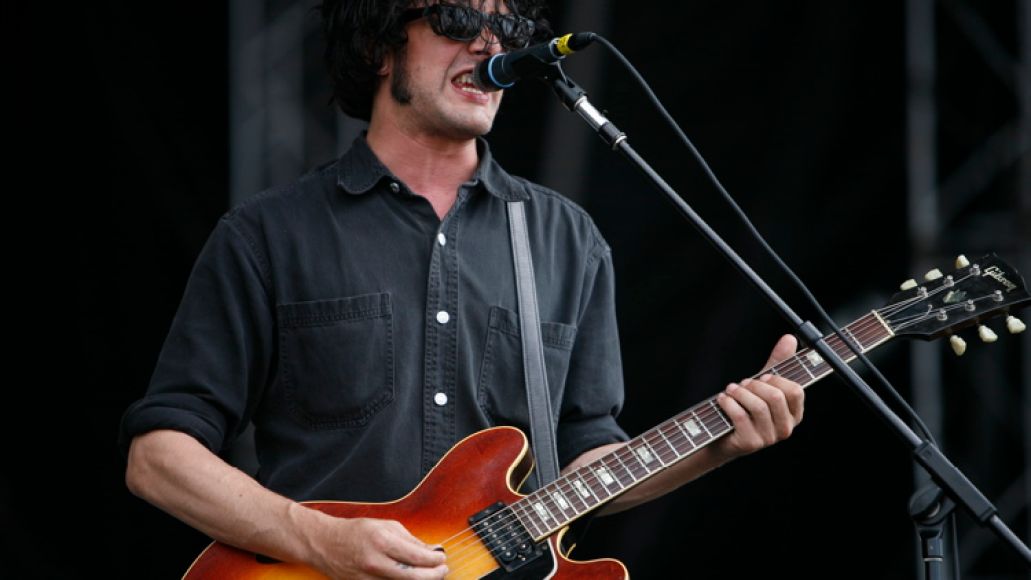 She and Him were the obvious sleeper hit of the weekend as several people passing by, waiting for Lil’ Wayne, or moving on to Paramore, stopped when they recognized the actress and were stunned by her powerful voice. Deschanel fit the part perfectly as her innocence made the light pop rock/folk that much more genuine. M. Ward was merely there to provide the soothing music and the occasional harmony. Back up vocals were given to another female singer who would later take center stage to perform her own song.

As the crowd grew, and the bro population increased, it was almost time for Lil Wayne, but before that and on the north stage, there was the punk rock/emo extravaganza of Taking Back Sunday. The Amityville rockers have become staples in their genre, and with a new lead guitarist in tow, they broke out all the old favorites, as well as a couple of new and unreleased songs. They surprised the audience with a rendition of “A Decade Under the Influence” that smoothly incorporated The Beatles’ “I Want You So Bad”, both of which brought the band to an excellent finish. 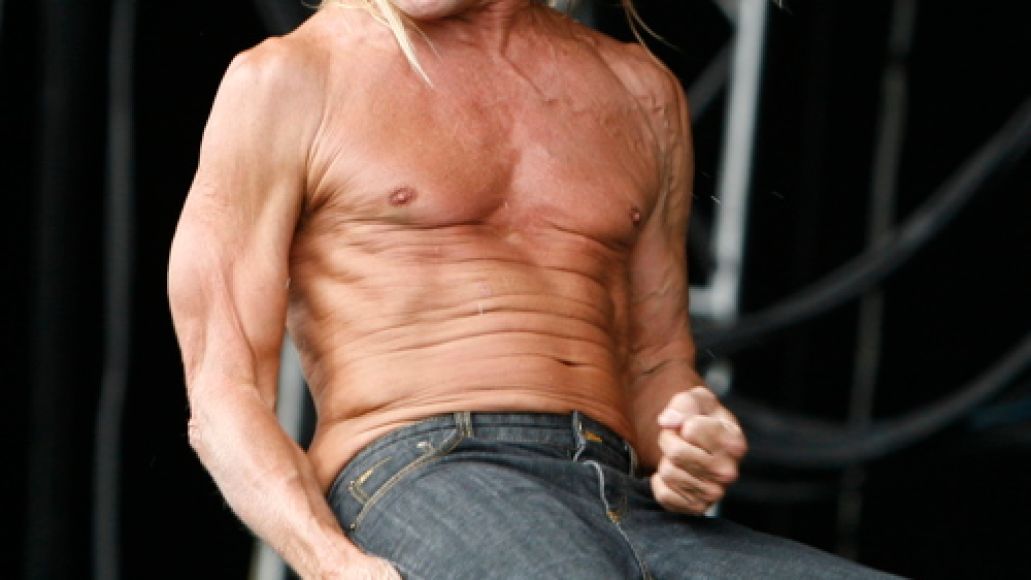 Following was the rude and crude relic, Iggy and The Stooges, and at 61, Iggy can still tear up the stage and make a large festival feel like a small punk rock club from the 70’s. The perpetually shirtless frontman and his Stooges covered tracks from 1970’s Fun House and their 1969 self titled record, bringing back the old school mayhem as he jumped into the crowd several times. After all the wiggling, thrashing and screaming of “Fuck You”, the younger audience had received their full punk rock education. The Stooges also provided one of the day’s encores, a first for the weekend.

On my way over to catch the much anticipated Black Keys, I had received word that Lil Wayne had delayed his afternoon set time by almost 40 minutes, and was going to play out his full hour. I stuck around to catch the inaudible Wheezy as he offensively and graphically sang his track about providing oral sex to a female, asking the ladies in the audience if he could “take these off”, referencing their underwear. The crowd was packed, however, and the set ended with a surprise appearance by Kanye West on the single “Lollypop”. Like all the other Black Keys fans waiting, however, we all wished we had stuck around for more of The Stooges.

After a quick set change, The Black Keys tore into a set that included tracks from their latest Attack and Release, as well as the previous Rubber Factory. Originally slated to play for an hour, their set was limited to just 30 minutes as they announced “you can thank Lil Wayne for that” inciting a “Fuck Lil Wayne” chant from a cheated crowd after the duo finished their all too short set. While on, however, Dan Auerbach and Patrick Carney stormed through a thunderous blues rock performance that left the audience wanting that full hour back.

Thanks to Wheezy, the south stage was permanently delayed for the rest of the day, but that didn’t stop Bob Dylan from keeping on with the show. Lately, he has been reported as being hit or miss in terms of his performances, but from what the packed audience heard, he was dead on. His voice might have changed with age, but the music coming from those speakers was impressive nonetheless. It was only the best for Mr. Dylan, as his backing band laid out the old tunes in surprisingly new ways. Most of the tracks had been re-worked since the recent tour following Modern Times, but everyone could still sing along to the classics they had all grown up with. It was truly awe-inspiring. Towards the end, Dylan was called back on stage for an encore of his own, with “Like A Rolling Stone”.

Virgin is known for its conflicting time schedule, and during Dylan, the newly revived Stone Temple Pilots played 30 minutes late to an amped crowd of overanxious Gen-Xers. Since going into rehab, Scott Weiland has lost much of his charisma and voice, and the STP reunion felt just as short lived as Weilands sober state. However, the set was still fun for those looking to see the band back together, playing all the favorites from their career that ended earlier in the decade. 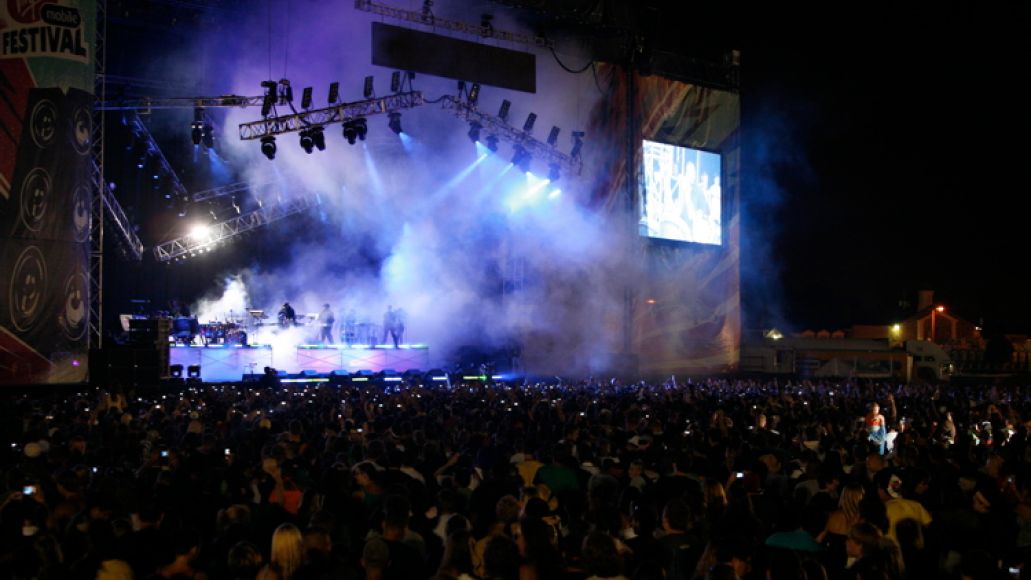 Closing out the weekend on the north stage was the powerful punch of angst from Nine Inch Nails. Trent Reznor and his gang of four were given two hours, and in that time they ran through everything from their early nineties songs, to tracks off their latest three records, the Ghosts series, The Slip, and 2005’s With Teeth. “Closer” came on early and brought on the night’s endless industrial beating as an impressive light display enhanced the experience. The light show at one point in the night became interactive as Reznor could wave lights on and off from his LCD curtain.

He wasn’t the only one loading up the power grid that night. Over on the opposite side of the racetrack, Kanye West‘s highly anticipated show came on 30 minutes late, but this time, it was not his fault (again, thank Lil Wayne). Strobes of blues and violets filled the sky as smoke covered the stage, helping to re-establish Kanye West as an amazing showman. Of course, the rapper was well aware of NIN on the other stage and he made note of this, proclaiming that he and Trent Reznor are one in the same, two guys just making different music. Reznor even made a comment, telling the crowd to go see Kanye West when the set was done “because he felt bad that no one was over there”.

To the contrary, both stages were evenly split as Virgin Fest 2008 came to an exciting and tiring close. 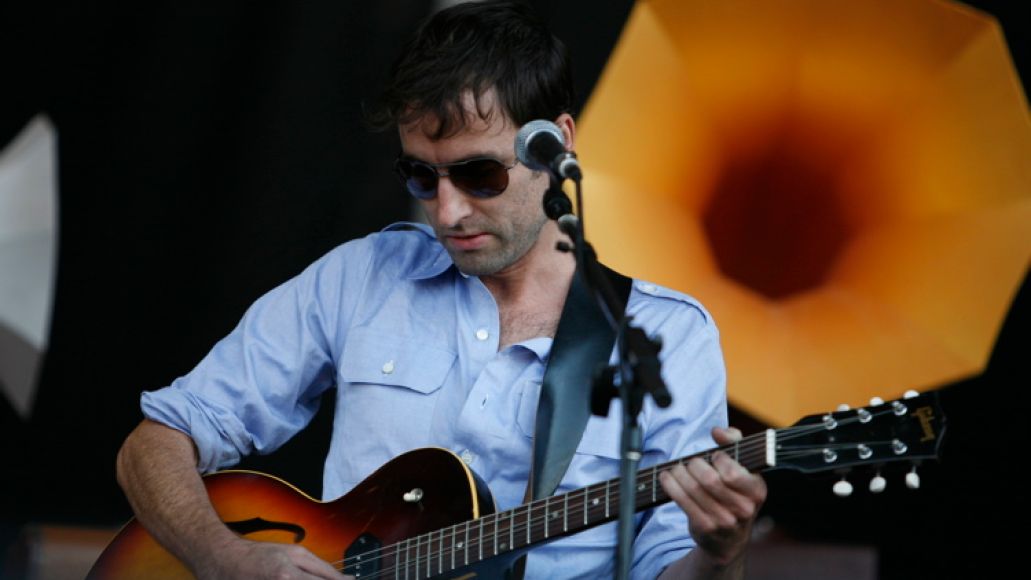 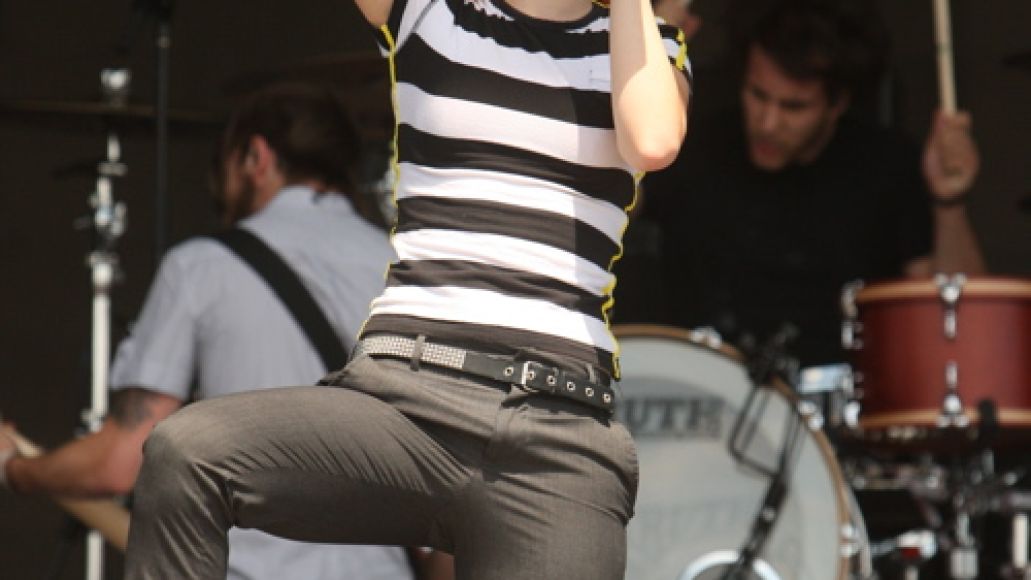 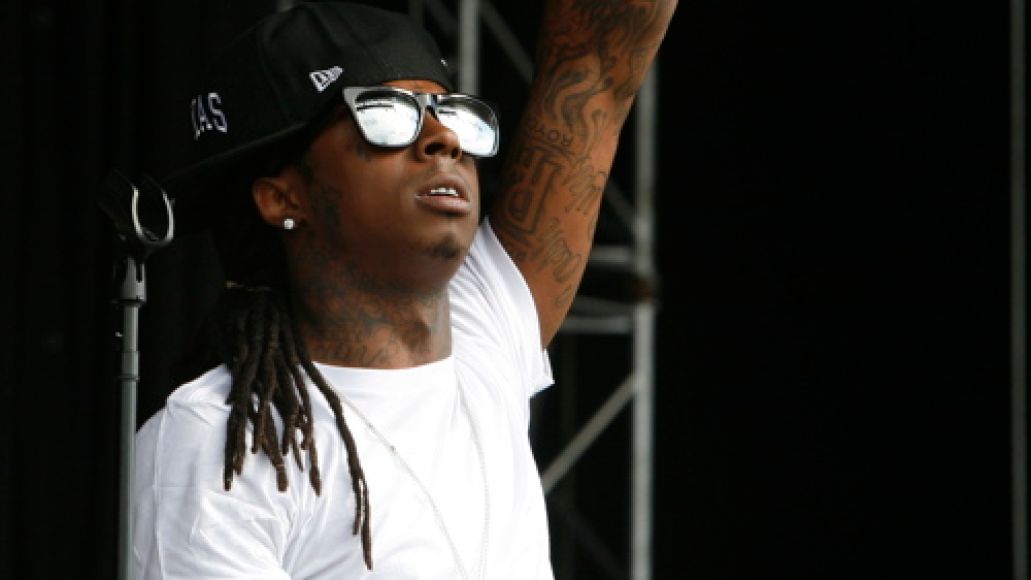 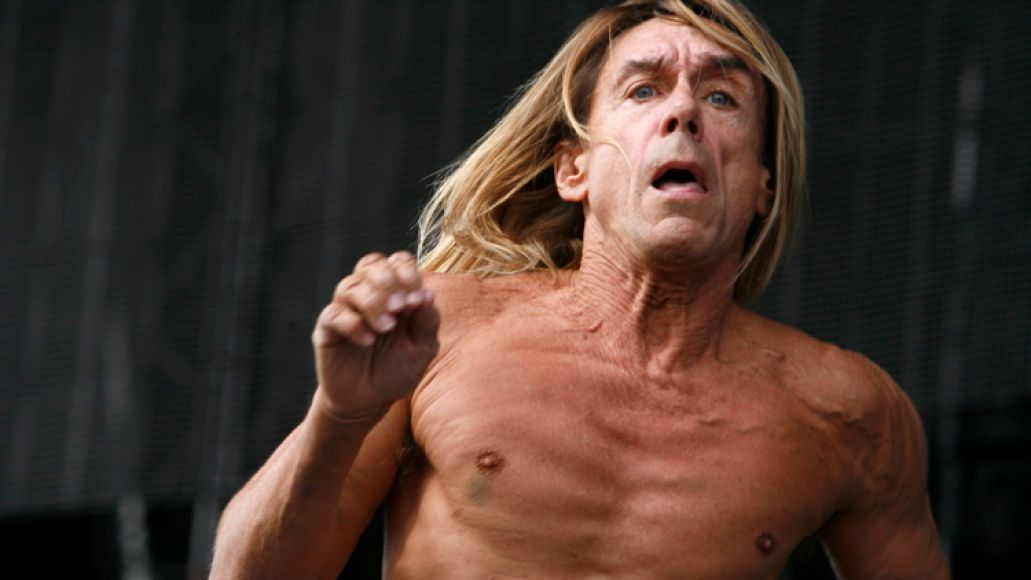 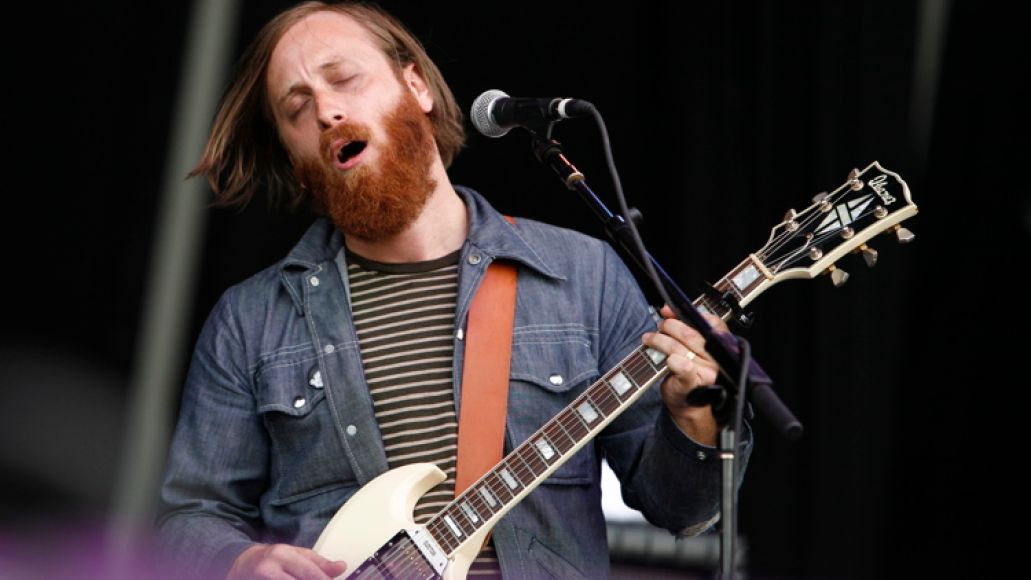 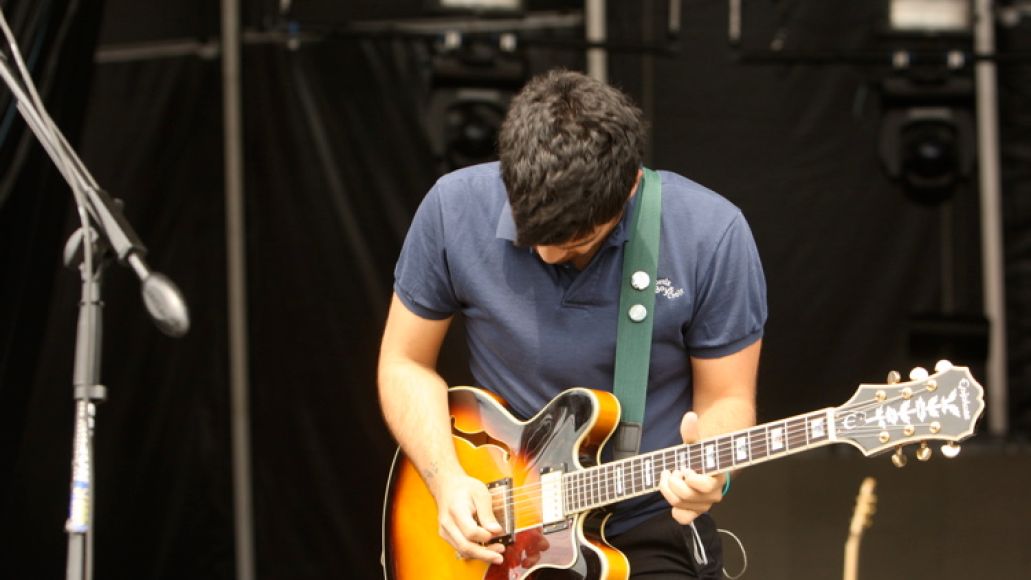 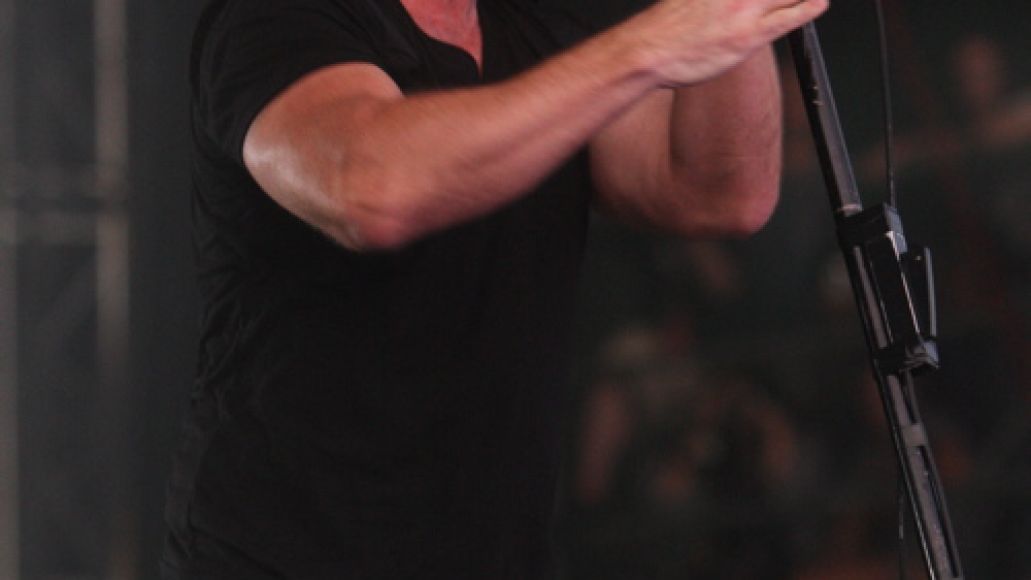 CoS at Virgin: Day 2