Tonight, Chicagoans (and out of towners) were finally treated to the British spectacle that’s been in the cards for four to five months. Riding on a hype that would benefit most summer blockbuster films, Radiohead headlined the first night of 2008’s Lollapalooza. Thom Yorke and Co. were welcomed with open arms, literally, and they responded with a warm, balmy performance.

It’s a wet dream for Perry Farrell that the British quintet matched the hype. The buzz over the past few months has been deafening, with fans scorching up the web and tickets for Friday leaving the box office. This morning, it wasn’t really a surprise to see several fans, well actually hundreds, catapulting through the entrance and racing to the front of the AT&T stage, where they’d be camping for a mere ten hours. As the day aged, more and more eco-friendly Radiohead shirts were bought and worn. It seemed as if they were the only band that mattered.

To some, they were.

An hour before the show, the sizable crowd of fans grew into an out of control madhouse, and quite the diverse one, too. Before the AT&T stage, everyone from your own worst enemy in high school (complete with mutton chops and beer caps) to that nice and friendly guy in the coffee house (one reading Graham Greene’s The Third Man) stood or sat around. The closest word to describe such a scene was, “odd.” As minutes were shaved off, little things, like the movement of stage lights, rattled the audience, bringing applause and cheer. It was painful to hear Stephen Malkmus & the Jicks ripping apart “Real Emotional Trash” without the accompanying images, but especially unfortunate to hear someone nearby ask, “Who the hell is playing over there?” Some other notable “winning” comments include, “That’s the VIP area-when Rage plays tomorrow, we should burn that down.” (Further evidence in my defense for seeing Wilco, instead.) The closest word to ascribe to the moments before the band came on was, “alarming.” 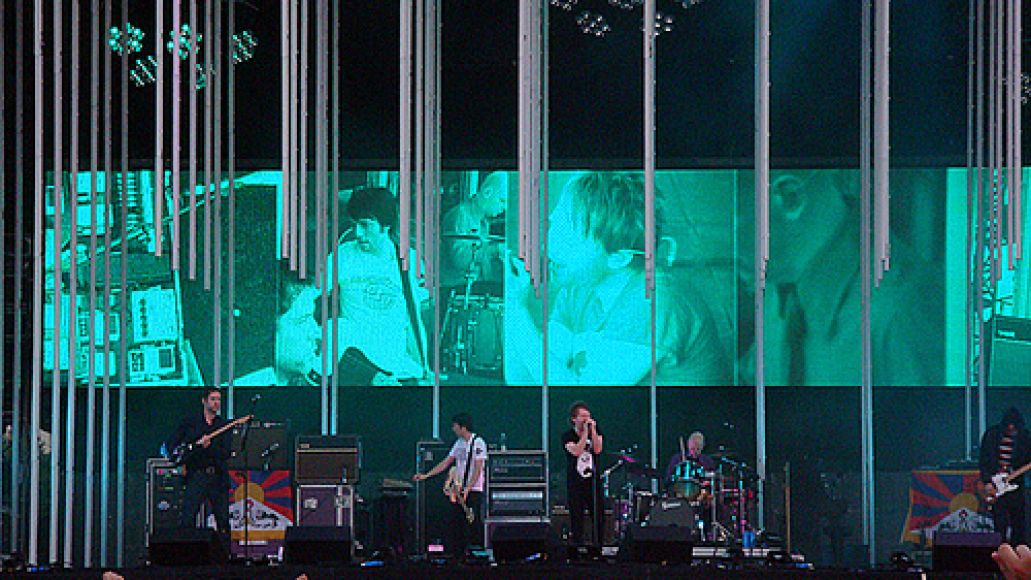 Just a mere twenty or so minutes before the sun went down, “15 Step” clicked into action, coming into full play with a brooding Jonny Greenwood at guitar, and also hiding behind a black hoodie. Any rumors circulating about Yorke’s health were put to rest within seconds, as the acclaimed frontman clapped and twitched about to the In Rainbows opener. Guitarist Ed O’Brien stomped around the edge of the stage with camera in tow, putting the fans on the corresponding screens. OK Computer‘s “Airbag” went over well, though some dead air was laced between as the members scattered around for new tools to use. When Greenwood and O’Brien took on drum duties, it meant only one thing: “There There”. The past single from Hail to the Thief sneaked its way over a still gathering audience, the moon slipping in, too.

Most of the set list featured new material, in other words In Rainbows, of which the entirety was played. Songs “All I Need”, “Nude”, and “Arpeggi/Weird Fishes” were knocked out in succession, with the latter exemplifying some jaw dropping visuals: a blue, aqua haze interspersed with little bits of white light, as if the band were undersea. Whether being eco-friendly made them more alluring or not, the light show sold the show in itself.

Both “No Surprises” and “Jigsaw Falling Into Place” saw some major crowd interaction, though it was “Reckoner” where the band felt really into the set. Drummer Phil Selway pummeled without reason, tending to every song with respected due. Even bassist Colin Greenwood seemed excited, jumping up and clapping here and there. This energy brought some life into old songs “Lucky” and “The Bends”, both of which sounded excellent. 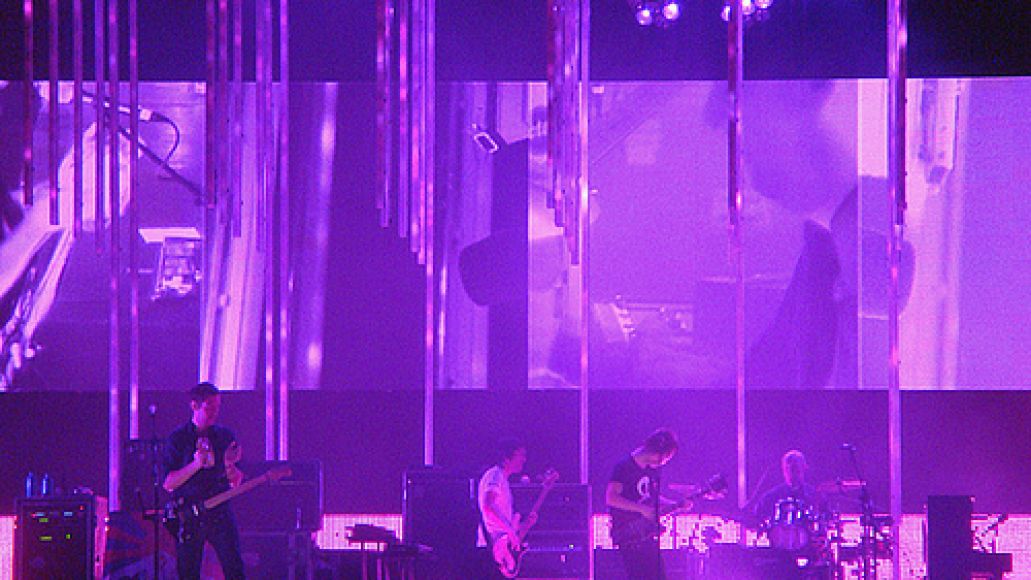 Despite the fact that fireworks began in “Everything In It’s Right Place”, it was in “Fake Plastic Trees” that they came to use. With most of the crowd singing along, Yorke, behind an acoustic, belted out the verses with a flavored emotion, all building up into the crash and hurrah’s of the chorus. As the song carried on, with the audience’s contributions pushing it to new heights, brilliant colors from nearby fireworks dazzled behind the stage, even continuing during the softer parts. There’s only one word to describe it, really… “epic.” If other bands don’t take note and put something together, it might possibly be where the weekend peaked.

There were two encores, though the second one felt more significant. Maybe it was the sound, but “Paranoid Android”, while a tight performance, felt tame. The solos weren’t as nail biting and it seemed to finish abruptly, even if that’s how it ends on record. “House of Cards” drolled on and on, and thankfully that wasn’t the means to an end. It took the digital medley of “2+2=5” and “Idioteque” to bring the band to a rest. Surprisingly enough, the crowd seemed satisfied, moving away with smiles rather than frowns.

And that’s why right now it feels like Sunday. Good luck headliners, you’ve got a hurdle to jump.

A personal thank you goes out to our excellent-as-usual photographer, Art Pena, who managed to grab a spot in the sound tent during the killer set. He’s our eyes to our ears. Check his stuff out!