Gogol Bordello’s multi-ethnic punk band has been known to create one hell of a theatrical party on stage. With its large troop of “gypsy punks”, donned in track pants and other flirty sports wear, the group acts hopelessly silly and jumps around nonstop as a wild assortment of other various antics ensue. The music alone screams for this, pushing the limits on fun, and in the end, that’s exactly what you get during the band’s live performances. It’s like once you’ve seen Gogol Bordello live, every other show you’ve ever been to just doesn’t seem to be quite as good as you last remembered it.

The night began with some original remixes from DJ Dubta aka Pedro Erazo (percussionist from Gogol Bordello), which kept a steady reggae beat that had a bit of an Indian/Hindu twist to it. His performance was pretty good, but the crowd was anxious to get their dance on, especially since the stage was being set up behind him. As the stage crew marched back and forth performing sound checks and the like, Dubta’s music provided us with a very chill atmosphere that helped keep us at bay as we bottled up our tension in anticipation of the main event.

Mayhem reared up the moment Eugene HÃ¼tz strolled onto the stage, carrying a huge bottle of wine. As the music began, everyone pushed forward, people were squeezed against one another, 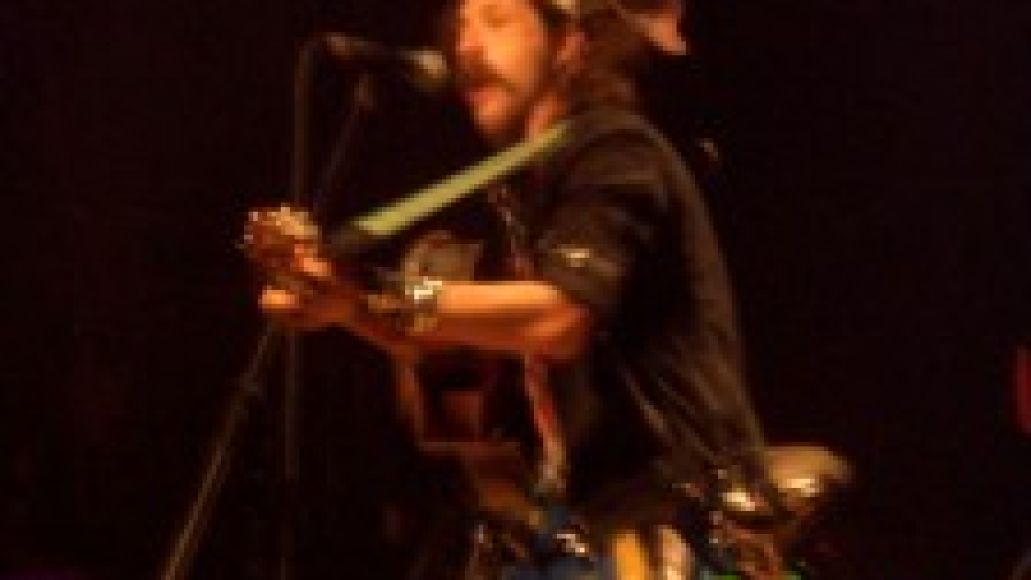 teeter-tottering back and forth in a wave of dancing crazies. The force of people pressing against each other took people’s breath away and many struggled to breathe, but that couldn’t keep everyone from jumping up and down. The heat was out of control and everyone soon became drenched in sweat that was mostly not even their own.

The Brooklyn punks kicked things off with the attention grabber “Ultimate”, soon followed by “Sally” which fulfilled any expectations ten fold. “Sally” was the beginning of the wild, crazy dance festival and the band was going just as nuts as we were. HÃ¼tz was dancing around in circles on one foot, while the others wiggled around making funny faces at the crowd, particularly Erazo who had a ring of feathers glued around his shoulders (which made him at times reminiscent of a flying monkey from The Wizard of Oz). “Not A Crime” brought the first sighting of Pamela Racine; Gogol Bordello’s own personal sexy percussionist cheerleader chick. Although Elizabeth Sun was no where to be seen, Racine carried her own, entertaining the crowd with peppy dance moves, impossibly loud drumming and a sexy body that was hard to keep one’s eyes off of.

The band continued to surprise with favorite songs “Supertheory of Super Everything”, “Wonderlust King” and personal favorite, “Mishto.” Everyone continued to dance hopelessly, drenched in sweat and stink, the crowd’s feet not even touching the ground at times . As the songs continued incessantly, it became apparent that the performance was more about having a fun time for the band and not exactly the song accuracy. And if you thought HÃ¼tz’s lyrics were hard to decipher before, you’re in for a surprise! Throughout the show, HÃ¼tz drank more and more wine, which made him speak faster and muffled in what sounded mostly like Russian anyways. It really didn’t matter that we couldn’t understand what he was saying though, because he kept us constantly amused with his wild dance moves and bucket drumming. 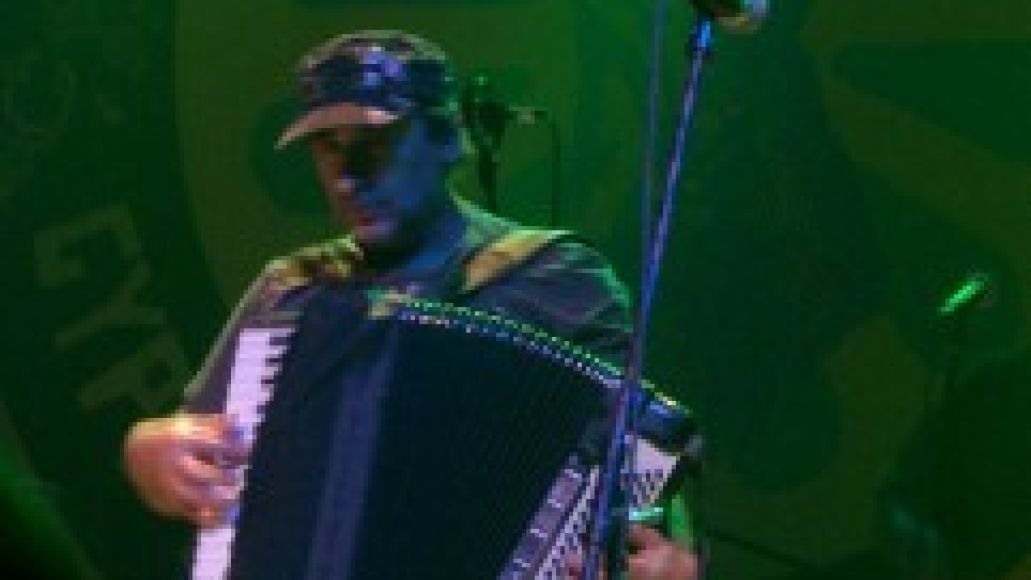 One of the major highlights of the evening was during “Start Wearing Purple”, when HÃ¼tz poured wine onto the crowd and accidentally drenched the security guard with it too. The band used this tune to reach its climax during “Think Locally, Fuck Globally,” which brought out an even louder thump from Racine and a lot of improvisation from band members Sergey Ryabtsev (violin) and Yuri Lemeshev (accordion). The band went out with a bang and cleared the stage when the song finished.

The crowd wasn’t ready to leave and after chanting the band’s clever name for at least five minutes, HÃ¼tz came back on stage, alone, claiming to “get more sophisticated.” The short break was actually kind of nice because it gave everyone a chance to catch their breath. HÃ¼tz striked up the start of “Alcohol” and as he played on, the other members slowly filed back in. The following songs took things a bit slower, but were still packed with a punch. Unfortunately, some crowd members were unable to grasp the concept of Gogol Bordello playing slower tunes and just kept pushing everyone around which was a bit unnerving. After a few more tunes, the musicians cleared out again, only to come back a final time, just to play “Baro Foro”, which turned into one huge cluster fuck of the group’s other songs. In fact, the closing minutes of the show were so disorienting it was difficult to tell if the band were playing the same song; it was just one long jam session and the crowd basked in the ridiculousness of it all.

When Gogol Bordello finally cleared out for real, the crowd was left satisfied and completely exhausted. Although everyone’s muscles probably ached and many heads were spinning non stop, a small part of those that witnessed the show still yearned for more dancing, save for a dire need of water. On the outset, Wednesday marked the beginning of Gogol Bordello’s Forces of Victory Tour across North America and if this was any indication, this tour will surely bring much joy to this entire country. 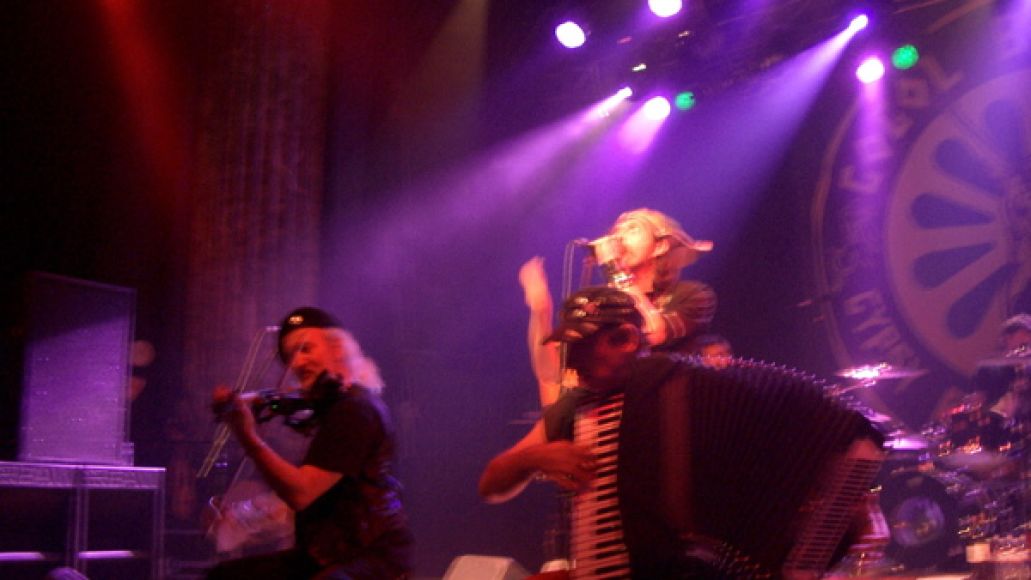