It’s hard to hear, much less think after witnessing a show by My Bloody Valentine, but that’s okay. After all, the musical construction of Kevin Shields, Belinda Butcher, Debbie Googe, and the colossal undertones of drummer Colm O’Ciosoig is without a doubt thee best thing to come out of the 90’s. So after witnessing the band’s live spectacle, there isn’t much use for thinking or hearing at that point. You’ve scaled the water mark, you’ve reached the end, or you’ve essentially peaked.

Such was this case this past Saturday at Chicago’s behemoth Aragon Ballroom. In what looks like a set piece from early episodes of Zorro, complete with terraces and Spanish architecure, the Ballroom is another one of the Windy City’s fine establishments. It’s open, expansive, yet colloquial enough to barter that indie credibility from its spectators. Most importantly, however, it served its purpose in comfortably housing the sold out crowd, eager to feast its eyes on the Dublin shoegazers. Whether or not anyone was able to communicate, considering everyone’s ears were stuffed with the provided plugs, was another thing altogether.

After a shy ten to fifteen minutes of teasing the audience (e.g. turning off the lights, adjusting the visual screens, and cutting out music), the yin-yang gender team casually walked out across the stage. Slinging on their instruments, the band pretty much just jumped into the wail and cry of “I Only Said”, off of 1991’s Loveless. The result? It was flawless, which is a tad surprising. Let’s reflect for a second. This is a band that’s been molding under a reclusive rock for nearly two decades (send your gratitude to Mr. Shields), yet in a matter of seconds, it was clear nothing has changed. Shields might have sacrificed his youth in the studio, slaving over unused demos and gravitating endlessly over third album ideas, but musically he’s still perfect. 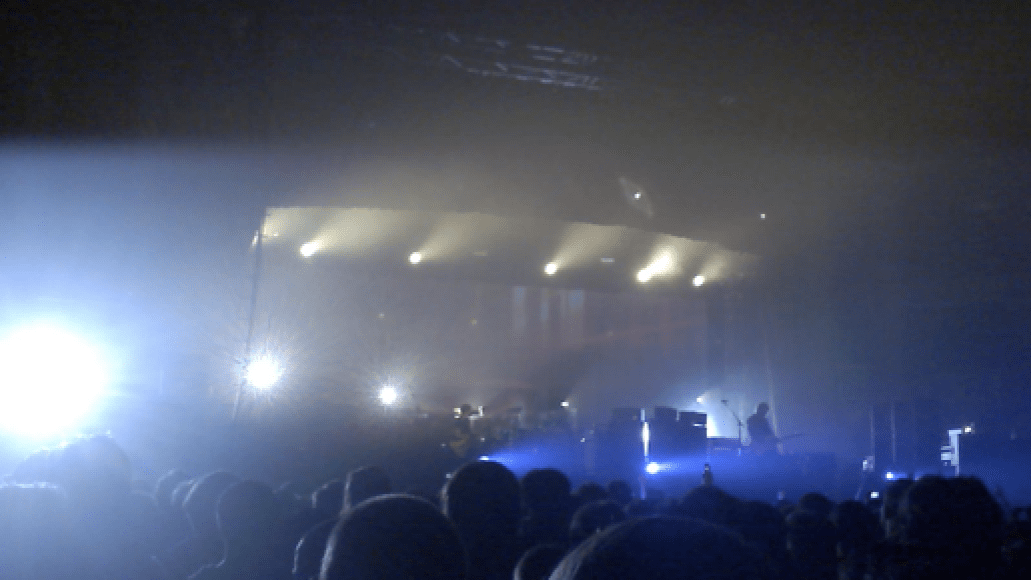 This statement was only reaffirmed with more cuts off of Loveless, including the drive and squeal of “When You Sleep” and the deep sludge of “Come In Alone.” Even material from the band’s 1988 album Isn’t Anything worked well. Drummer O’Ciosoig ripped apart the punky “You Never Should” and Butcher’s harmonies killed throughout “Nothing Much to Lose.” Somehow the b-sides, which included 1988’s “Cigarette in Your Bed”, originally lost to the band’s countless arsenal of EPs, made its way into the set list, as well.

Perhaps the highlights of the night were the band’s actual signature tunes. The rolicking and commanding “Only Shallow” brought arms in the air and the sexy sway of past single “Soon” had every twenty and thirty something dancing like an idiot. It was during these songs that the power of pop music truly bled through, despite the layers and sawdust of distortion. People might be shocked upon initial listen that this Dublin outfit managed to hit success, but these songs have hooks and pulleys just like any other standard tune. It’s only a little more complicated; nevertheless, the mechanics are there and these songs highlight ’em. In a world where Radiohead and NIN now exist as supreme worldly headliners, with light shows that exceed any iamginative expectations, it was nice to see a standard affair. The premise of shoegazeing is rooted in its simplicity, and this performance was no exception. The light show made clever use of various neons, ranging from pinks to greens, that integrated with a video backdrop, which screened everything from ghostly figures running down empty hallways to lonely, forgotten European roads.

Things took an abrupt turn into musical hell when the band closed with the sprawling, feedback inducing “You Made Me Realise.” Essentially a twenty minute wall of noise, the former, rare “single” seemed to scare everyone into a daze. Each band member collided into their own respected instrument. Shields shredded frantically as he nervously paced the stage inch by inch, while Googe spun in circles behind her bass. After ten or fifteen minutes of this, it was painful to watch O’Ciosoig machine gun into the drum set. As for the crowd? Nobody moved. It was very trance like, thanks to the visuals that mirrored Kubrick’s ending of 2001: a space odyssey, and it wasn’t helping that the lights sputtered about to the hypnotic repetitions. It took twenty or so minutes, but eventually the band dove back into the actual song and closed off the night. One could call this self aggrandizing or musically promiscuous; however, they wouldn’t be understanding the fundamentals of this music. This is an act whose sole purpose was to break the former contstraints put on music by past sensations, yet by still managing to entire few genres through the backdoor. Yes, it’s unconventional. Yes, it’s arduous. Yes, it would have been better to have used the twenty vacuous minutes on better songs like “Sometimes” or “Blown a Wish.” However, that’s not how this band rolls, and for that reason above all, it’s why they’re also fairly unpredictable.

Who would have thought the audience wanted that?

Special thanks to J. Nordberg for additional photo support.

Set List:
I Only Said
When You Sleep
You Never Should
When You Wake
Cigarette in Your Bed
Come in Alone
Only Shallow
Thorn
Nothing Much to Lose
To Here Knows When
Slow
Soon
Feed Me With Your Kiss
You Made Me Realise

My Bloody Valentine stuns at the Aragon Ballroom (9/27)