Hamilton Leithauser is an excellent frontman. Some might argue that statement, but they’d be wrong. No, New York’s The Walkmen has a great leader, and for having a sound that starts to loop and seem monotonous over time, the quintet’s lucky to have such a commanding officer. Reason for argument is that last Friday, on yet another hazy, rainy night in Chicago, the indie sensation stretched from the confines of its album work, and really put together a fine show. It was impressive, to say the least.

Things started and heated up with Brooklyn’s own Golem. While prematurely pegged as a poor man’s Gogol Bordello (okay, by me), the richly cultured act sizzled on stage. Looking like communists in alluring red and black matching outfits, vocalist Annette Ezekiel Kogan charmed the crowd, Alicia Jo Rabins brought the sex appeal (and the violin), and Aaron Diskin, well, he sang along, too. Together the borderline gypsy punk act danced and jostled through songs about cats, the American immigration system, and sexuality, of course. The signature trio were ceremoniously backed by the tight mechanical engine that was Taylor Bergren-Chrisman on cello bass, Curtis Hasselbring smokin’ up the trombone, and Tim Monaghan on some fast, tense drums. At times, the act felt less like Bordello and more like a warped, foreign doppelganger to the B-52’s. All in all, it surpassed the expectations of an opener and with some time (and clever marketing), the sextet could do wonders for themselves. 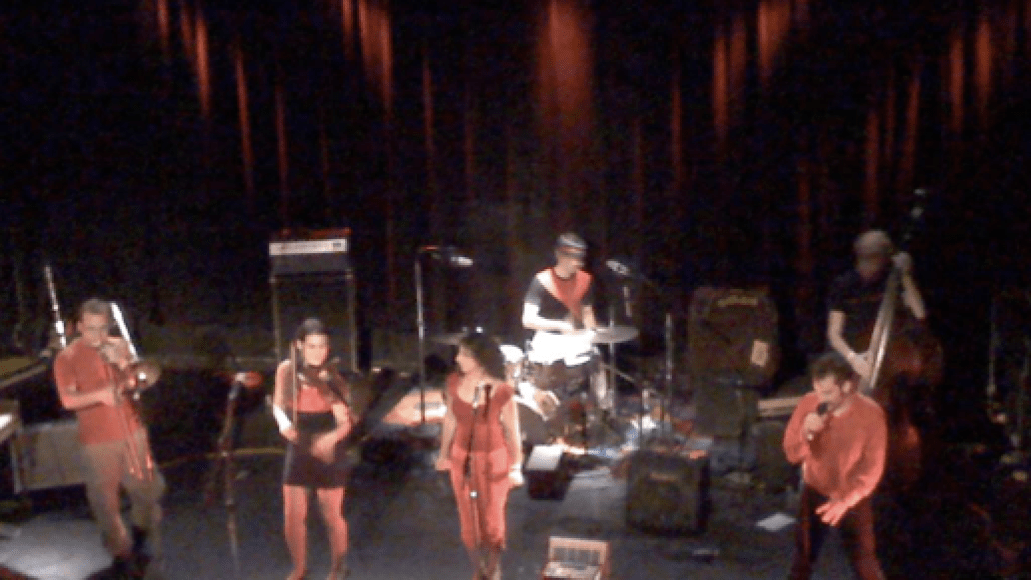 Whether Chicagoans are always hungry for a music act or they’re just bored half the time, the Midwesterners really take attention to the music scene around here. Despite an onslaught of rain, Chicago’s Metro was packed, from lower to upper deck. One fears what a big act could do the place, if given the chance. With that in mind, the time between the sets felt hot and balmy, which meant only one thing: it was just gonna get hotter.

Fifteen to thirty minutes after Golem departed, the lights fell down and immediately hundreds of hands went up in the air in excitement. It was surprising to see so a crowd so exasperated for what many might consider a still budding band;however, a good hypothesis would suggest they’d all seen ’em live… and knew what to expect. With the first notes of “New Country,” the opener off this year’s You & Me, Leithauser kicked right in, under a lone spotlight and amongst many shades of grey. Slow to start, his vocals climbed higher and higher, crawling over the venue’s ceiling walls, seemingly attempting to claw out. Matt Barick, hidden behind the drum set, spent some with the maracas, before he officially stepped into role on the following, “Into the New Year.” 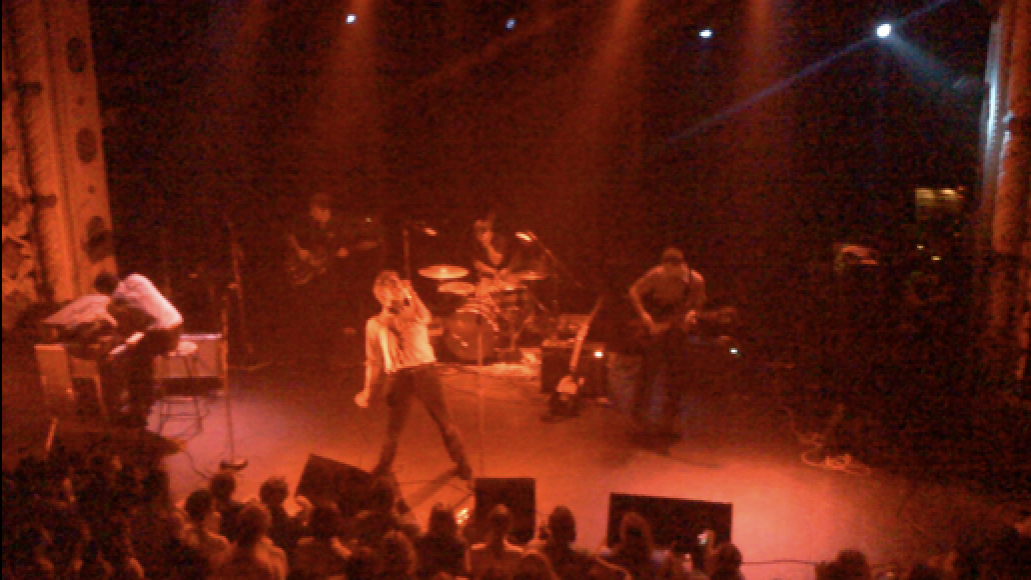 Sonically, everything was in place. At the organ, Peter Bauer dove straight into the subdued notes, while behind him Walter Martin swayed with the bass. For the most part, everyone remained rather stoic, but it was Leithauser who brought in the energy. Albeit drunk (or at least it seemed so), the tall, demeaning frontman stood over the packed audience with flare and authority. He seemed moreso a politician than a rock n’ roll frontman, basking away in high strung notes, and flailing about only so often. His rigid composure allowed for a fascinating presence, which stood out in the ambient indie rock. During the band’s second song, when Leithauser sung, “And finally I opened my eyes,” the audience erupted at the ambitious ringleader, ready for anything.

Reds and purples came down and the horn section stepped out for “Canadian Girl.” Another cut from You & Me, the new material played to an audience eager to hear it, which seems rare sometimes. Everyone treated the new tune as if it were an old favorite, and the band played it that way, too. Between the verses, Leithauser kept beat with his fingers, tapping lightly on the microphone while staring off in a daze. It was quirky, but only added to overall character. When the chorus hit, the wall of sound peaked, along with the lights that blistered red, and off went Leithauser. Shortly following, and out of nowhere, more and more energy started seeping in, especially as the band crashed into the drive and pull of the very U2-esque “Thinking of a Dream I Had” (off of 2004’s Bows & Arrows) and the Pixies-like favorite, “Wake Up” (from its debut, 2001’s Everyone Who Pretended to Like Me Is Gone). Then it reverted back to new tunes, and at a slow, slow pace.

That seemed to be the band’s only flaw. Its sound was either ricocheting, absorbing, or numbing. When it switched from the extreme to the lows, it really sunk. Getting through new cuts “Long Time Ahead of Us” and even the flavor of “Donde Esta La Playa” (which they joked was French) seemed arduous, which only continued with good, but not altogether great tracks, “Red Moon” and “What’s In It For Me.” If it weren’t for Leithauser’s dominating vocals, it would’ve been more of a drag. Fortunately, the band had more in store, specifically with “The Rat”, another goodie from Bows & Arrows, the organ wailing “All Hands and the Cook” (off of 2006’s A Hundred Miles Off) and the soulful “I Lost You.” The former saw the band in a static riot, with everyone tackling eachother musically. Looking back, it was one of the highlights of the show, personally. 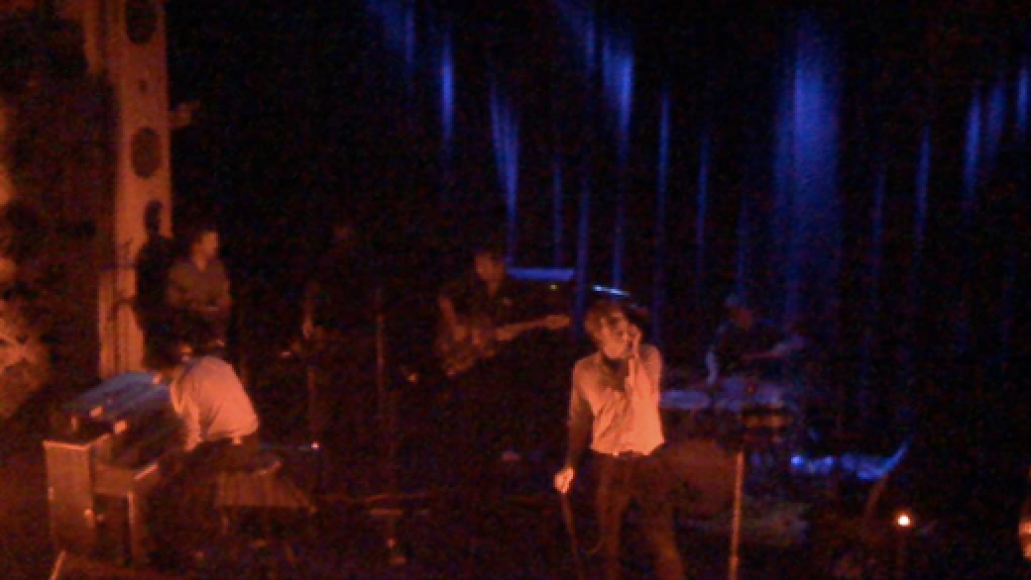 Before the obligatory encore, “Louisiana,” the second addition from the band’s 2006 album, managed to squeeze itself in. Technically, this could have closed the night effortlessly. With a sprawling storyline and some excellent musicianship, it was a stunning closing with the horn section shining at once and the actual band playing it with all they had left. It was everything any band would want to put in a closer, but that’s not what they intend now, do they?

Of course not, which is why the band returned to play the 2004 b-side, “Fly Into the Mystery.” While good and all, encores are more or less predictable these days. It’s actually more interesting, personally of course, to see the band return with a cover. But hey, they didn’t save any sacred hit for the end, which in itself is lame, so let’s give them that. It must be said, unlike most indie acts these days, the real kinetic energy for these guys is on stage. You & Me, while a strong album, is nothing compared to its live counterparts. These guys did a phenomenal job readying for this tour. So with that advice, go take a look at their tour itinerary, and see this New York act soon.