A double album is always quite ambitious, regardless of a band’s success or credibility. Even Radiohead decided to split Kid A and Amnesiac, two albums recorded during the same sessions, by a year.Then there’s this year’s Okkervil River, which separated the related The Stage Names and The Stand-Ins annually, too. On the flip side, however, there are bands such as the Red Hot Chili Peppers, who in 2006 bit the critical dust with it’s double offering, Stadium Arcadium. Bands need to realize that it is simply a burden to present fans or new listeners with almost two full hours of new music, and if they are going to do so, then each song better be damn good.

Most of these records fail to click with casual listeners; when listening to an album becomes more arduous than it is entertaining, it no longer serves its purpose. Most people are so overwhelmed with the amount of music, that they just avoid the whole thing altogether. It almost goes against the idea that an album should be listenable, in its entirety, in one sitting. For Margot and the Nuclear So and So’s, however, the band felt it necessary to release two versions of its latest effort, Animal! and Not Animal!. Despite the band’s relatively low recognition, the Indianapolis octet has chosen its own version of the double album for the group’s sophomore effort, but not for the reasons you might think.

Signing with Epic Records has proved to be problematic for the So and So’s thus far, and is cause for this mess. Animal! is said to be the twelve track LP that contains the songs the band themselves selected and will only be available online or on vinyl. Whereas, the twelve track, full-length Not Animal! is the collection of label-selected songs, and thus is the “officia”l record. The band’s MySpace explains a bit, but still leaves much unanswered: “Remember, ‘Animal!‘ is our second album, while not animal is a label compiled collection of songs. We HIGHLY recommend listening to ‘Animal!’ first.” Many of the songs are found on both albums, so it seems that the song selection was not the only disagreement that the band had with its label.

Basically, releasing the albums this way is an obscure method of releasing the album Not Animal!, along with its B-sides, as the ideal album in the eyes of the band members. Publicity stunt or the real deal? Who knows? All we know is that by releasing both, they have semi-ventured into a place where very few bands have come out on top. Though not a true double album, both are still being released simultaneously. And while one album is only available online or on vinyl, most people these days (especially the ones listening to Margot & The Nuclear So and So’s) get their music online anyhow. If anything, it is just downright confusing. But, I digress… 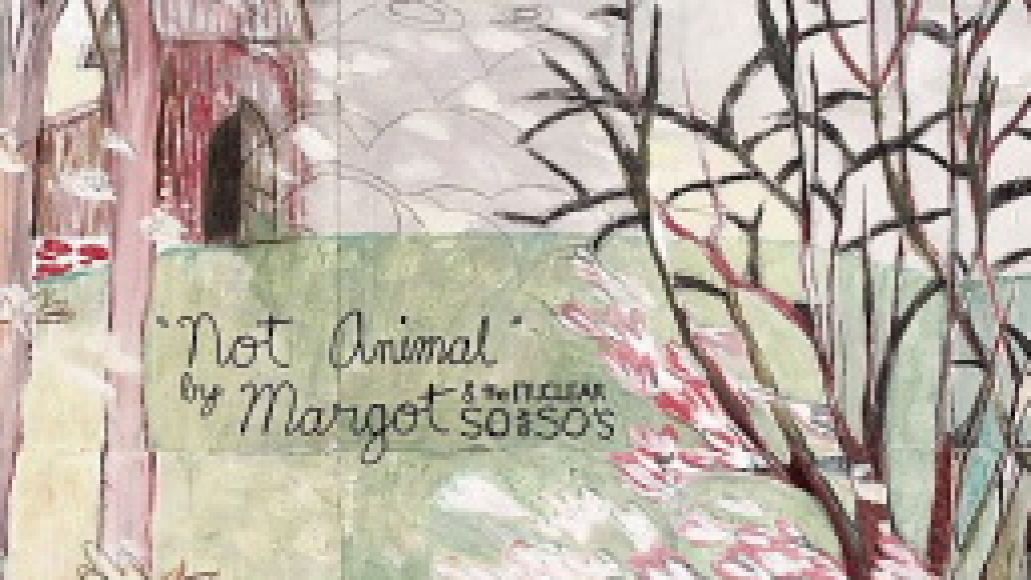 As far as the music is concerned, both albums could potentially stand alone as individual bodies of work. I have to say, however, that I lean more towards the views of the label, and find Not Animal! to be the stronger of the two, yet musically and thematically, they differ very slightly. It is Not Animal! which seems to flow smoother, with a more appropriate balance of loud and soft songs. Though, both albums are filled with the usual Margot onslaught of meticulous instrumentation, an army of layered but near perfected noise, all accompanied by the smooth and beautiful vocals of front man and songwriter Richard Edwards.

The tracks develop smoothly, sometimes starting off slowly, but progressing into orchestral chaos (“Shivers (I’ve Got ‘Em)” and “Pages Written On A Wall”), and at other times stay relatively low-key (“Real Naked Girls” and “Holy Cow!”). Still, every single song includes dozens of instruments, which for a band with eight steady members, is not really a shocker. The cinematic orchestration is consistent with the band’s name, which originates from the character of Margot Tenenbaum in the Wes Anderson filmThe Royal Tenenbaums. Alongside the orchestral pop music, the lyrical themes consistently depress: talk of metaphoric bombs, guns, car accidents, poison, unrequited love, broken hearts, and lame parties are all sung by Edwards’ calm and bittersweet, soothing voice. Additionally, the songs’ somewhat cryptic nature make them rather difficult to understand at a glance, but are interesting and inventive enough to try to decipher.

The main difference between the two albums is probably Not Animal!‘s exclusion of the two duets found on Animal!: “Mariel’s Brazen Overture” and “There’s Talk of Mine Shafts.” On Animal!, these songs play back to back, and present a connecting story of two conflicted lovers, the male and female vocals singing the story together in perfect harmony. These tracks are certainly powerful, and deserve a spot on the official record. Further differentiation can be noted in the albums’ opening tracks, Animal!‘s beautiful “At the Carnival” is nowhere to be found on Not Animal!. Though tracks are left out, many of the highlights from Animal! do rightfully appear on the label cut, and the ones that don’t, have pretty strong musical counterparts that do.  Additionally, Not Animal! is noticeably louder than Animal. Though very well balanced, a few more chaotic and noisy tracks are included in the label’s collection. Not to say Animal! is not loud enough, as both albums are filled with so many different instruments, it is hard to keep track of them all, as Mexican horns, xylophone, harmonica, acoustic guitars, electric guitars, flutes, cinematic percussions (chains, washboards, etc.), and string sections all make numerous appearances on each disc.

Taking all this into account, the highlight on both albums is the poignant “As Tall As Cliffs.” Both the folkiest and most upbeat song on either record ends Animal! , but comes right at the climax of its counterpart.  In what seems like a loving gesture, Edwards admits, “I tell tales as tall as cliffs/ I’ve been telling lies all the time/ but I’ll tell you the truth.” Here we get the best taste for Edwards’s songwriting, which usually includes some sarcastic self-deprecation in the form of a generally cynical, but loving direct address to an unknown individual.

It is difficult to say what caused such a disparity in the decisions of the label and the band members, when ultimately, the albums differ so little musically and thematically. It is even harder to understand why the band thought so highly of Animal!, when the little things that make the albums different prove Not Animal! to be the stronger of the two anyways. Maybe it is a publicity stunt; the albums certainly cannot be discussed without its back-story. Regardless, the group’s dual sophomoric effort contain many similar overwhelmingly beautiful sounds that made The Dust of Retreat so great, but lack some of its predecessor’s subtler achievements. Still, the albums are both very strong, containing well-constructed somber tunes, with beautiful melodies and intricate instrumentation. Yet maybe in this case, less would have been a bit more.

Check Out:
“Tall As Clifs”
“A Children’s Crusade on Acid”

Album Review: Margot & The Nuclear So and Sos - Animal!/Not Animal!