If there’s anything left in this world that gets better with age, besides a fine wine, it’s Joe Satriani. On Wednesday night, the world-famous guitarist stormed the world-famous Chicago Theater. It might have seemed like a dated classic rock show to many, but it was much, much more. Then again, Satriani (or ol’ Satch) is something of a legend for me.

Butterflies raced around my stomach after I dealt with will call. While the concert had been in my schedule for weeks, it finally hit me that I would be seeing one of my guitar idols. As a guitarist myself, I began 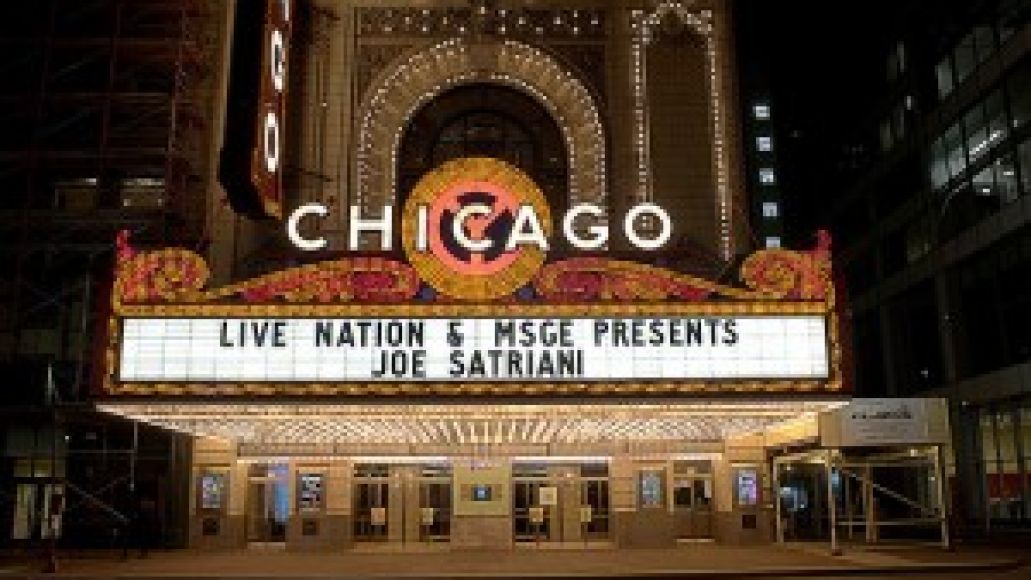 playing at twelve years old, Satch has always been a hardcore influence in my style. So to see him live, and in the Chicago Theater of all places, was one of the most satisfying feelings I’ve felt in years.

Opening the show with a bang were legendary Long Island heavy metal pioneers Mountain. Unfortunately, while the band had started, I was dealing with security regarding the permission for photographs. As a result, I missed the first two tunes they played, but the applause was louder than hell. Eventually, I made my way to my seat and the larger than life guitar legend, Leslie West, introduced the band and told the story of their next song “Nantucket Sleighride.” He discussed how whaling ships in New England would hunt for whales and stick their harpoons into them, only to when the whales would dive into the ocean, the rest of the ship would follow to the watery depths below.

Drummer Corky Laing never sounded better and carried the thunder of the gods on his mighty sticks while bassist Richie Scarlet played bass and twirled his helicopter-braided hair like there was no tomorrow. West sounded like a loose cannon, blowing strong and loud behind his guitar and white, pearly glasses with all the youth of a twenty-year old and the wisdom of his years. Mountain certainly climbed very high on its set and definitely threw fireball after fireball of old tunes that rocked the house, all of which included “Theme Of An Imaginary Western” and a cover of Bob Dylan’s “Blowin’ In The Wind.” Naturally, the New York trio closed the show with a standing ovation to the band’s legendary single, “Mississippi Queen”, complete with thunderous applause, West’s soulful delivery, Laing’s jazz drum solos and an explosive throwback to the 1970’s. To be in the middle of this show was unheard of, much less completely friggin’ awesome. 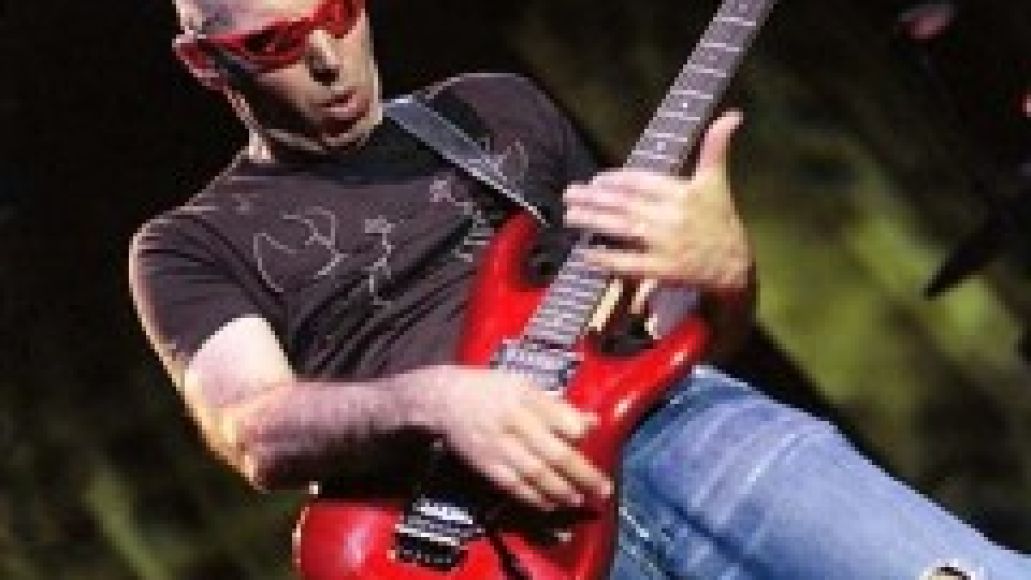 After a good twenty minute intermission, Satriani himself strolled on stage with his signature bucket hat, black shades and red JS Model Ibanez. With a raise of his arm, the band kicked right into the opener, “I Just Wanna Rock.” His band, consisting of longtime great bassist Stu Hamm, drummer Jeff Campitelli, and rhythm guitarist Galen Henson wasted no time in proving how vital and solid they were behind Satriani’s powerful leadwork. With Satriani himself, there was no question on how amazing this guy is live. For the fifty-two year old Westbury, New York native, he looked like a happy kid on Christmas, getting his first Hot Wheels cars and racing them around the house. His smile, and playful but shy demeanor, certainly connected with the crowd, and for a man of few words, Satch’s guitar did all the talking and singing. He made it so easy for us guitarists, and yet the stuff he did, just murdering the necks of those Ibanez guitars he has, really is one of the most incredible technical skill I’ve ever borne witness to.

The band then ripped into “Satch Boogie” where the energy flew off the shelf like an old F-14 Tomcat jet fighter ripping through the clouds. As I looked around me, the crowd certainly spanned the spectrum of age from little six year old kids jumping in their seats to people that could easily be my parents. They were all gathered in the belly of the Chicago Theater to witness something spectacular. Satch’s guitar knows no boundaries, but it does command the respect from all generations present in his honor. As the band progressed with some older, great tunes such as “Ice Nine” and the ultra guitar classic “Flying In A Blue Dream,” Satch took a moment to talk with the crowd regarding his old silver Ibanez that had been stolen early in his career. He reminisced about the feel, the stickers and the overall soul it possessed and as a result, Ibanez made an exact replica of his once great guitar, to which he introduced the song “Ghosts”, off of his most recent record, Professor Satchafunkilus and the Musterion of Rock. The tune, like most Satriani material, went over very well. Guitar scales were torn left and right off his guitar and made easy, even though these alien techniques of Satch were probably some of the hardest skills to learn. Regardless, no note was missed and the entire band sounded incredibly clean. Major props go to the theater staff for a great job on the sound levels.

After an electric blues-laden intro to the next classic tune, “One Big Rush,” Stu Hamm took over and played a ridiculous bass solo for a good ten minutes. The man slapped and danced with his bass without any difficulty at all, leading me to believe that he and Satch were drinking from the alien musician Kool-Aid.  It’s a mystery how these guys are so talented and how they make it look too easy. After the chants of “STU! STU!,” Satch came back onstage for the big one-two-three knockout finale of “Andalucia” from the new record, “Super Colossal” off of 1998’s Crystal Planet and the excellent finale of “Surfing With The Alien” off the 1987 self titled classic. 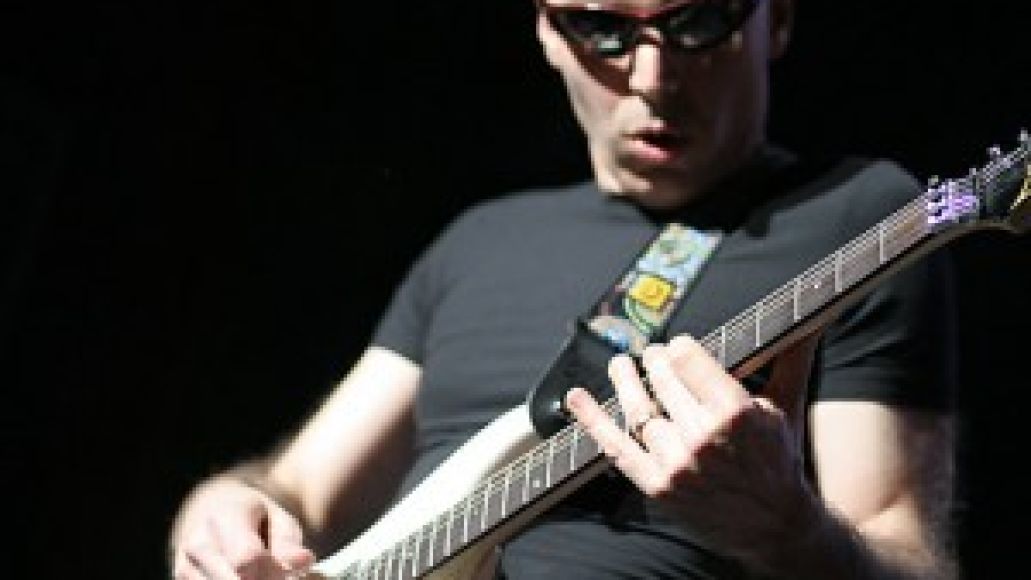 As the band parted ways, they came back on for one final time with a call-and-response pumped up number, with the crowd calling out all the licks Satch played on his guitar. Crowd interaction is always fun and here it was no different. With everyone’s spirits raised, Satriani offered one final gift for the city of Chicago: an impromptu blues jam with Mountain’s Leslie West. As a result, West came onstage and gave Satriani one of his exact models of his guitar, to which Satriani took it and played it blisteringly brilliant. Satch proved to be not only surfing with the alien, but schooling him on the guitar as well. West’s old school, 60’s blues-thick leads and Satriani’s out-of-this-world speed runs certainly made for a magnificent counterpoint contrast, but in the end, it was only rock and roll, and I liked it.

I’d like to give my personal thanks to the staff and security of the Chicago Theater for making the show a wonderful experience with their patience and help in getting me set up with the press pass. Without them, this article would not be present and I myself would have missed out on some really great guitar work. Rock on guys!

Special thanks to Eric VK Photography for additional photography.