There’s nothing worse than a disjointed rock show. When there’s a lack of flow and the music rises and then falls, it’s dangerous territory to deal with, especially for the headliner. Fortunately, that job went to the Texas indie act, Okkervil River, this past Tuesday at Chicago’s own Metro. Without its raucous performance, the bill would have suffered tremendously.

Then again, you’re looking at a weekday concert.

Tuesday night is tough. It’s not as demeaning as Monday, but it’s not exactly Wednesday, either. When fellow Texans, Black Joe Lewis & The Honeybears, took the stage shortly after nine, pretty much everyone knew it was going to be a long night. At this point, however, that was okay. With his uncanny resemblance to Andre3000, Black Joe Lewis made twelve bar blues fun again, slinking through tune after tune with ease. Each unmarked hit had the crowd moving, shuffling in their shoes and sinking into their hoodies. It was a bizarre event, especially given the demographics of the audience, but it was just non-stop fun. 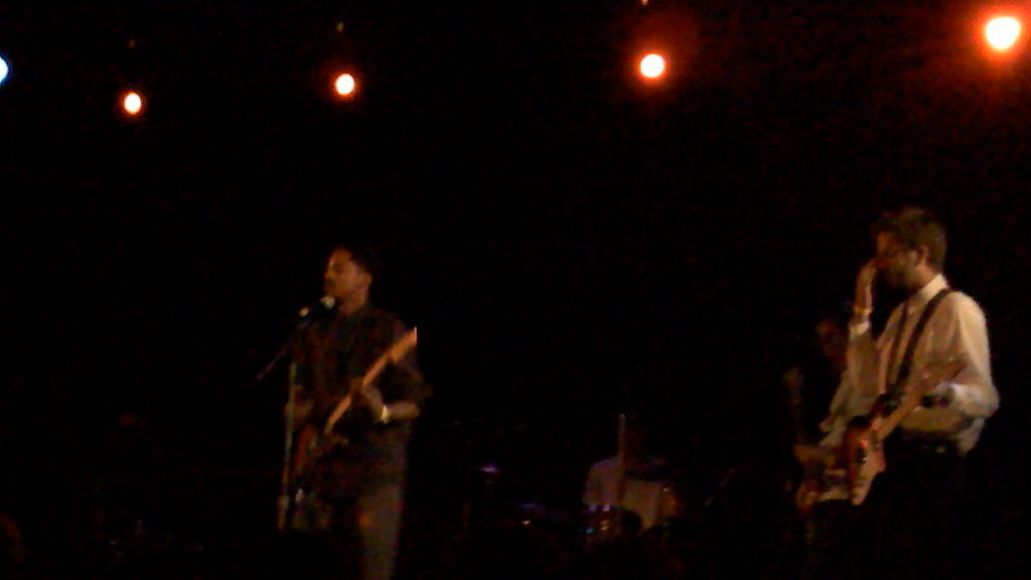 This is when things get, well, “icy.”

It was around ten o’clock, and the troubling idea settled, “There’s another opening act?” At this junction, and at this late at night, the prospect of another opener is not something that’s taken with open arms. People are starving for the headliner. With that context, one would then hope the act is intriguing, invigorating, or at the very least, mildly entertaining. Maybe it was because Black Joe Lewis brought out too much soul in the crowd, but the melodic, meandering, and stale indie rock of Crooked Fingers was an immediate downer.

Nothing about the band stuck. It was Snow Patrol without the hooks, a whisper without the gossip.  Between the singer resembling, to quote a friend, “everyone and anyone’s distant uncle” and a rhythm section that served no purpose, other than to stare amicably at nothing, Crooked Fingers was a sore, bitter middle to an otherwise exceptional night. None of the members didn’t even care to acknowledge the audience, which must go along with their minimalistic approach to music. In other words, they’re “above” that. 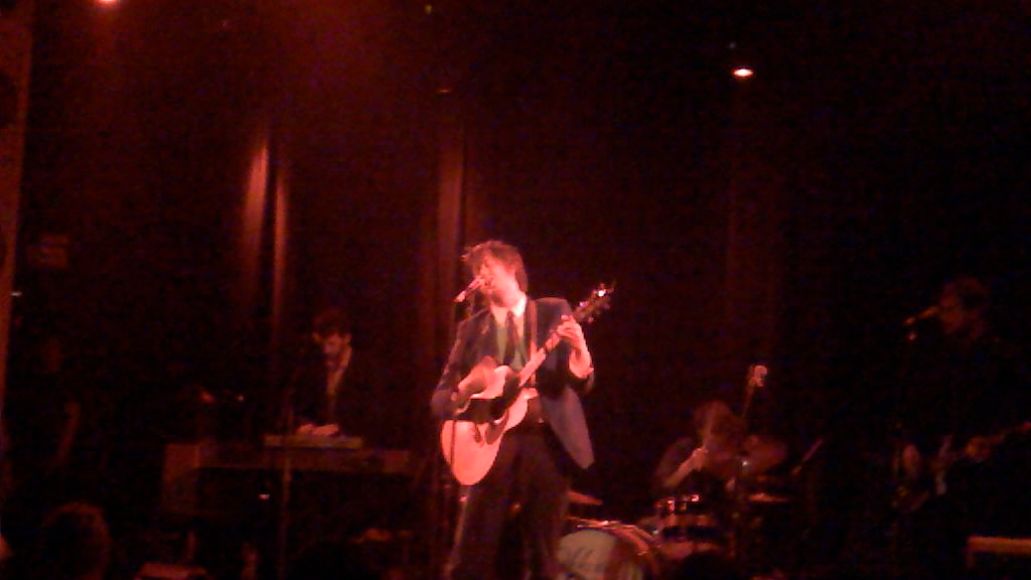 Of course, things picked up thirty minutes later, when frontman Will Sheff finally brought out his rag tag team of indie rockers. Plummeting right into “Plus Ones”, Sheff hugged and tossed around the mic stand, treating it like a psycho ex-girlfriend, which was oddly fitting given the lyrical material. This frantic energy continued throughout the night, especially on new cuts “Singer-Songwriter” and as the pop eccentric fuzz wailed on in “Black”, off of 2004’s Black Sheep Boy. Shuffling his hair in an erratic style, Sheff curled out his endless lyrics with ease, barely skipping a beat, which was nice considering the night had already itched toward midnight.

It was no surprise that “A Girl In Port”, featuring Black Joe Lewis’s horn section (see below), would be just as epic as it was a few months back at Lollapalooza, however seeing the inclusion of “John Allyn Smith Sails” so early in the set was shocking, to say the least. This is a song that could close the show without any qualms, so it was a ballsy move to throw it in so early. Of course, that would be assuming the band had nothing else to offer, which was not the case at all.

Things went quiet, real quiet, when Sheff kicked out the band for a bit and came back with his trusty acoustic guitar. He digressed on how it was odd seeing the venue from the headliner’s perspective, as it seemed so big as an opener, alluding to the crowd size. Shortly after, he glided into a tone perfect performance of “A Stone”, complete with every single soul in the Metro remaining quiet and mindful. When he finished the last of the dancing lyrics (“who once gave just one rose, one day, years ago…”), it was obvious there was a tragic sound in his vocals. This is a man who doesn’t bleed on stage, he relates. 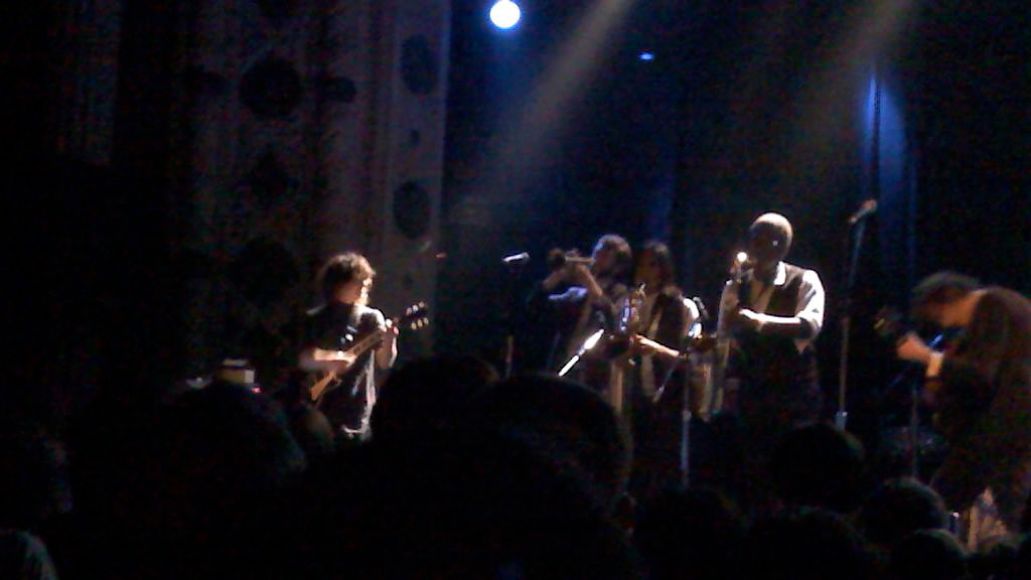 It didn’t stay quiet for too long, as the band returned and jumped into “Lost Coastlines”, another track off of this year’s The Stand-Ins. This particular song saw some great collaborations, from the vocal exchanges between Sheff and bassist Patrick Pestorius to the banjo introduction by multi-instrumentalist Lauren Gurgiolo. When the song finished, Sheff admitted they were saving it for later, though no one seemed to complain when they went right into this year’s “Blue Tulip”.

While many acts might see broken guitar strings as a bad thing, Sheff used it to his advantage, taking in some requests, which included a reworked rendition of “The President’s Dead”, only relabeled here as “The President’s Alive”. Needless to say, it was hilarious and laughter segued into clapping during “Our Life Is Not A Movie Or Maybe”, to screaming, in a brutally honest rendition of “For Real”, and finally to air guitar-ing in the garage rocker “Unless It’s Kicks”.

It was a quick savior to the night, giving good reason to stay up and endure a miserable “hump” day the following morning. And if it were any other band, an encore might have been a death sentence, but another solo performance by Sheff with “Red” and one final hurrah for the band, in the atypical closer “Westfall”, proved worthwhile. Of course, by then, it was nearing one in the morning. Ouch. 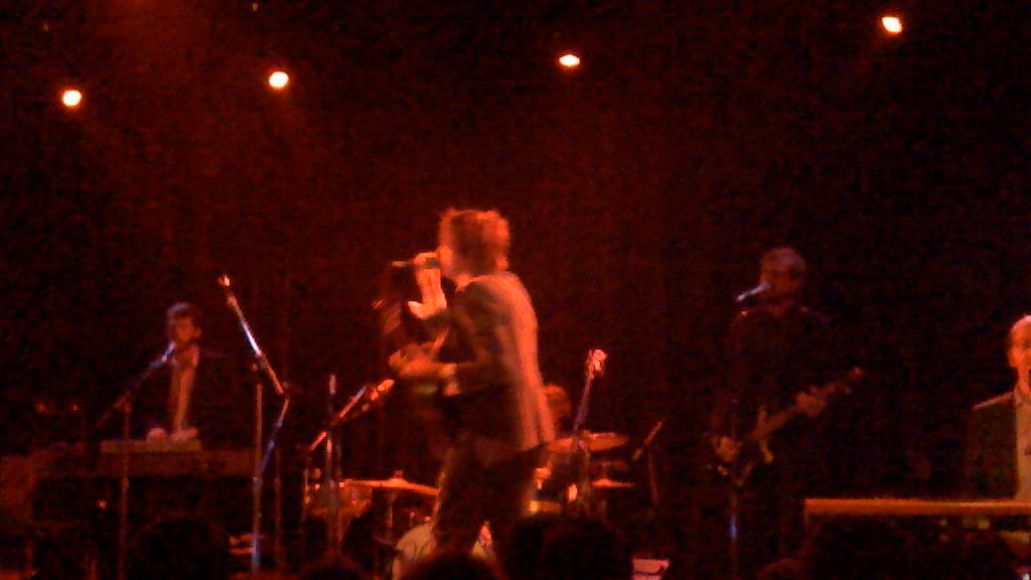 So, what’d we learn from this? Never let a slow lull dwell between two pivotal, powercharged acts that were born for the stage. It’s a simple forewarning to follow really, and one made easy with five to ten minutes of a cautionary listen on MySpace.

Fortunately, this predicament won’t be yours, as the bland middle is leaving the tour, perhaps to pursue a holistic journey in finding out how to write interesting music, both in the indie pop and ambient music genre. Too harsh?

Set List:
Plus Ones
Singer-Songwriter
A Hand To Take Hold Of The Scene
Black
The Latest Toughs
A Girl In Port
John Allyn Smith Sails
Pop Lie
A Stone
Lost Coastlines
Blue Tulip
The President’s Alive
Our Life Is Not A Movie Or Maybe
For Real
Unless It’s Kicks
Encore:
Red
Westfall