On a Tuesday afternoon, I traveled to Greensboro, NC in lieu of the Staind concert promoting its new release, The Illusion Of Progress. Supporting them on said concert tour is currently Papa Roach and Seether (the latter touring for the release of Finding Beauty In Negative Spaces), while the venue itself was a lackluster indoor atmosphere.

Spectacular?  Not particularly in terms of locale – a non-smoking, indoor facility surrounded by all manner of prosti-tots and drunken country folk.  A crowded pit of “general audience” members standing on what amounts to a basketball court, while rows of bleachers on all sides are only half-full.

When I arrived at the Greensboro Coliseum, I met up with a press liaison at will call, signed the release form, and entered big double-doors greeted by numerous queues of people.  Security was extremely tight on all ends, and after a metal detector check I entered the main floor of it’s auditorium and sank in for a show.

What could be said about our three popular music acts? 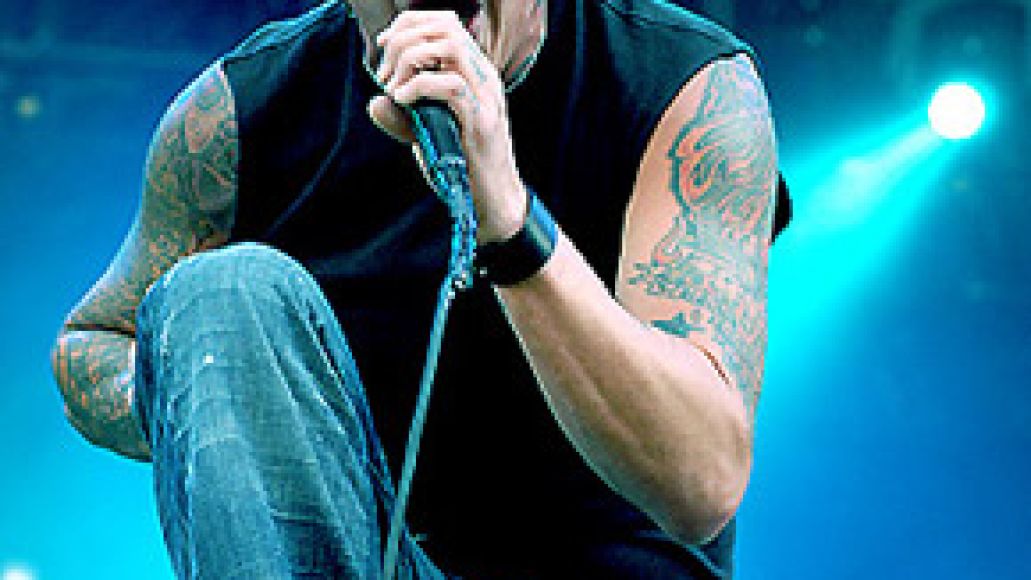 Roach. Now, in all civility I am willing to give everyone a non-biased standpoint of the performance itself.  I say this because, as it turns out they ended up being the best in terms of set-list choices and crowd management.

In the past, I have heard people comment about their lack of skill on stage (primarily vocals).  Jacoby Shaddix was the last to enter, and he really did prove his worth in matters of hyping the crowd, while also sarcastically attempting to charm the “little dirty girls” in the room. Opening with a track off of Infest titled “Between Angels and Insects”, whilst segueing into a slightly remixed version of “Getting Away With Murder”.

Once everyone was up out of their seats, Papa Roach debuted two new songs during the course of the evening – “Hollywood Whore”, which was introduced by a rant about people like Britney Spears and Paris Hilton, and “Lifeline”, a generic post-grunge tune for the teenage crowd.

Guitarist Jerry Horton shreds with accuracy on every track, and after drilling through the typical inclusions such as “Scars” and their favorite closer “Last Resort”, and allowing Jacoby to wander throughout the bleachers a bit, the band exits and like a class of loyal high schoolers, we all go for a smoke break before Seether enters the room.

Initially, it was like a scene from Nirvana: Unplugged.

White Christmas lights decorated the stage, while a custom-designed backdrop was lowered to coincide with their latest album release. 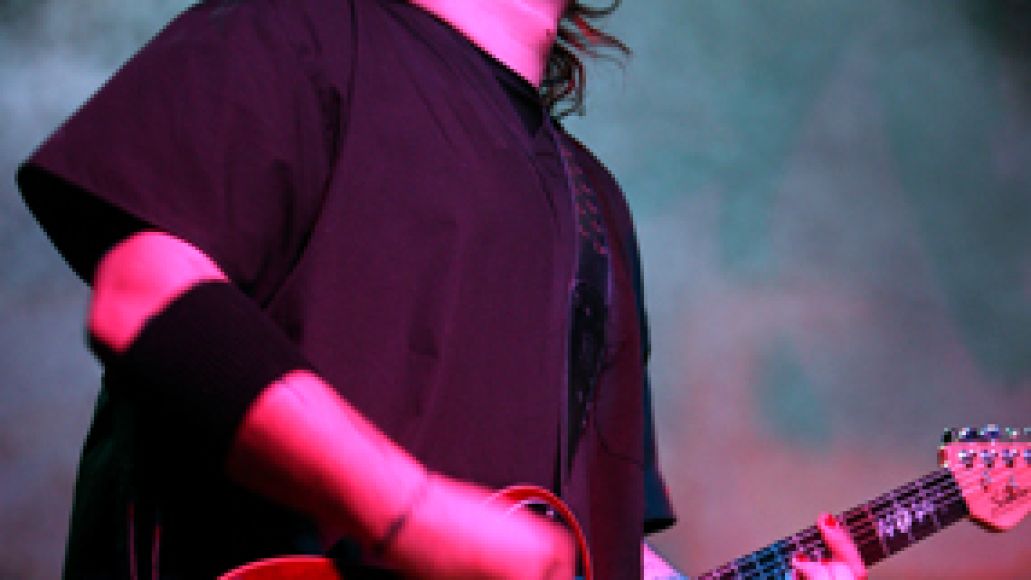 In terms of song choices, Seether had a typical selection; pulling from all of their latest singles, while throwing in two lesser-played tunes (“Needles” and a cover of STP’s “Creep”), we witnessed “Rise Above This”, “Remedy”, “Fake It”, and of course their first big single “Fine Again”.

Visually it was stronger than what my eyes could believe, but between a weak microphone on Shaun Morgan, highly-pitched guitar distortion overlapping that, and a very constricted set…

…the band I was most looking forward to seeing ended up being the least worthy performance all evening.

Advantages?  When “Broken” was played, everything did seem to click briefly – sound was on point, and lighters were aglow in the audience.  It was actually very intimate, even for a live show’s regular set piece.  My subtle gripes did continue, however when a female fan named Amanda informed me that their live performance the day before in Charlotte included “No Jesus Christ”, my 2nd favorite tune by the group.

As they ended with Shaun’s distorted sonic collage before the loudspeaker, Staind was primed to blow them away.

A giant purple curtain dropped and revealed our headliner of the night.

All to be said about Staind’s performance is relatively good news – highlights were not entirely hit songs, for they dug around and pulled one track after another in the lesser radio play department, opening with “Suffocate” from Dysfunction.  Intertwined in ever-popular agendas like “Outside”, “Epiphany”, and all manner of Break the Cycle selections Staind did manage to dip into their early roots and even closed their set with my all-time favorite track, “Mudshovel”.

Aaron Lewis was primed for the stage that evening, with a very street-clothes appearance and personable image near his microphone. Mushok never looked better, his hair down and his hands shredding perfectly.

A lot of thanks had to go to the coliseum’s tech crew, who had put together quite the psychedelia for lights and projectors alike.  Scenes from everything and beyond played behind the band – a room of never-ending doors, a shaky camera trudging through woods Blair Witch style. 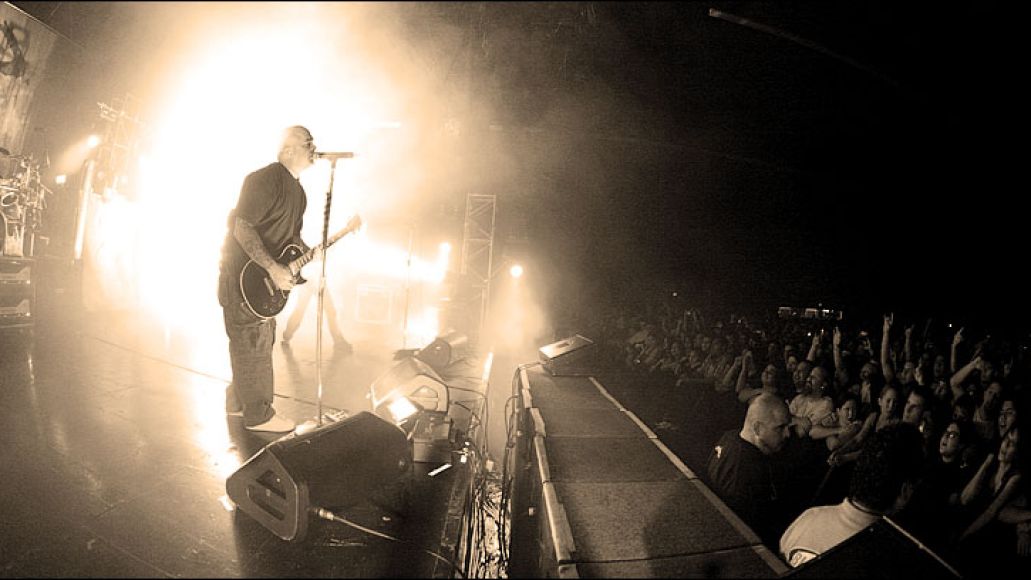 For all intents and purposes, each song delivered a new mood to the room. “For You” brought out the angry teens, “Believe” had couples swooning, and “Suffocate” simply had the room shaking almost as much as Seether’s “Remedy” had done prior.  Unlike their most recent (and in my opinion weak) release, Staind impressed with a live show Greensboro may indeed remember for a while.

As the crowds exit, we are handed flyers for Nine Inch Nails’ Lights In The Sky: Over North America 2008 tour, where they will be making a Greensboro stop November 3rd.  While you hop over and download the new Papa Roach tracks that are now available at their official website, I am heading over to Ticketmaster to get my Reznor fix.

Expect a piece on that from me in the coming month, and peace out.