Maybe it’s because the members are pushing 60, or that security seemed overblown, or that the thousands of fans were either bloated, pushy, or drunk (most were all), but AC/DC’s run at Allstate Arena last weekend was less of a rock concert and moreover a geriatric crisis of magnificent proportions. It didn’t take much convincing for this conclusion. The EMT teams racing around to assist overwhelmed fans, the long, long lines of weak bladders at the urinal, and the frail, pale, and sweaty bones of an Angus Young in AC/DC boxers seemed proof enough.

Still, the prospect of seeing one of rock n’ roll’s greatest contributors was too good to pass up. This sentiment was shared, with thousands of Chicagoans, all of whom were part of a second sold out night. From the door to the main floor, forty or fifty-something year old rockers raced around in their respected AC/DC shirts, both faded and anew. Most of the fans sported devil horns, a signifying icon of the band, which lit up in a rhythmic beat. A few select fans could have been mistaken for former members of Hell’s Angels. Having this type of crowd, locked up in the lame and tame Allstate, felt very surreal, yet apropos.

40 minutes after eight, the lights fell and the cherry red devil horns littered the stands. The crowd was deafening, screaming and clapping at what was to come. When the screens ignited, a lewd animation jettisoned across, featuring some teenage-like girls racing around a train. It was only obvious that the opening chords of “Rock N’ Roll Train” followed. What surprised everyone was the life sized train that rocketed on through the back of the stage. The current single off the band’s new record, Black Ice, went over well, playing to the crowd like an older classic. Unfortunately, sound issues plagued the first few songs. Brian Johnson’s vocals were nearly nonexistent in “Rock ‘N Roll Train” and “Hell Ain’t A Bad Place To Be.” If it weren’t for “Back in Black” being such an iconic, anthemic song, the mixing would be a bitter disappointment. However, fans still managed to rock out and Allstate Arena “got their shit together.” 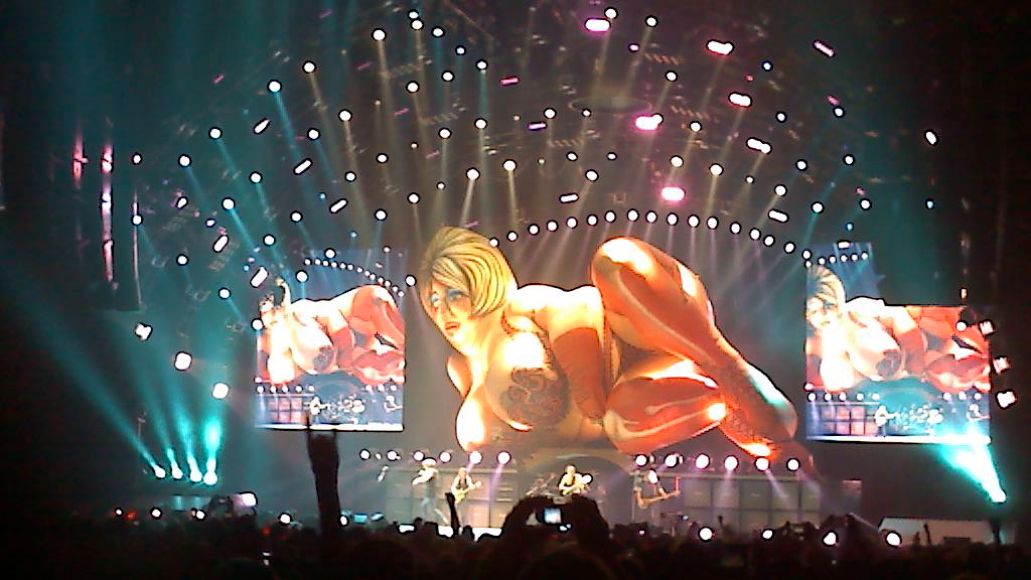 Peaking album sales or not, but most of the material from Black Ice went over cold. There was literally no fan interaction or interest in “Big Jack” and later on with “Anything Goes.” Though to give the album credit, “War Machine” saw some hands moving and some fists pumping. Given that the album’s been out for less than two weeks, this shouldn’t come off as a surprise.

“Dirty Deeds Done Dirt Cheap” felt expected and despite its abrasive punch, the end result seemed rather forced. It wasn’t until after, with “Thunderstruck”, that the band felt really alive. With some stunning camera work, which even went underneath Young as he kicked up a storm on his Gibson SG, the notorious riff rioting number brought the band up to the acceptable, expected heights the $90 dollar ticket implied. 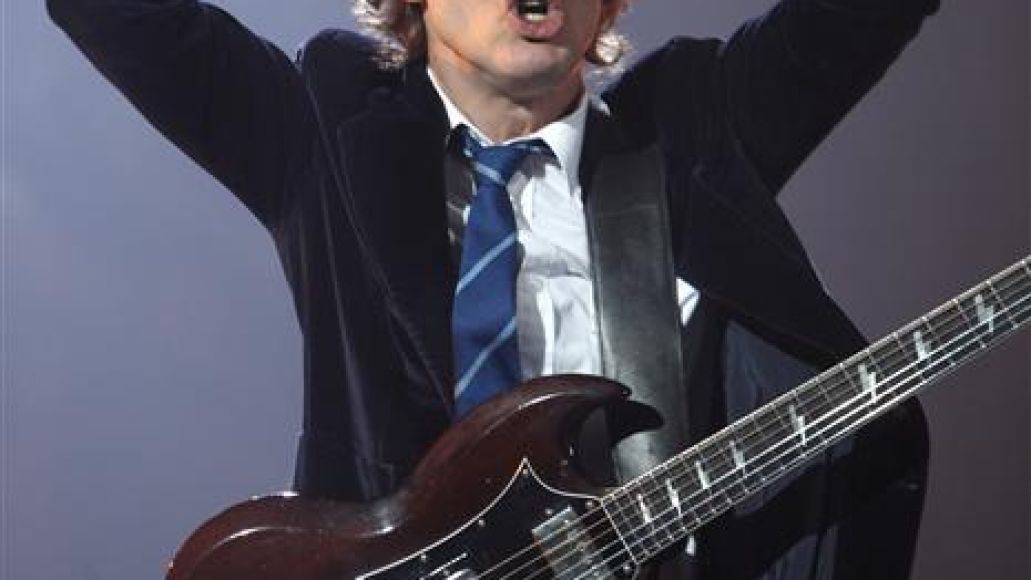 Once things started rolling, the band started having fun. During “Hells Bells”, Johnson swung around underneath a mammoth sized bell, which had been lowered from the rafters. It was rather jovial and showed some character to the frontman who’s typically overshadowed by Young on stage. Oddly enough, “You Shook Me All Night Long” felt rushed, with most of the members pushing through, as if it were a filler track. The digital screens featuring a silhoutted woman dancing were a nice touch, however. Naturally, pyrotechnics came alive during “T.N.T.”, which brought out the most in the audience. Immediately following, and from the back of the stage, an enormous woman filled with air, empowering the stage with a voluptious body and quite the dome of a head, to which the band broke into “Whole Lotta Rosie.”

The highlight of the night came with the set closer, “Let There Be Rock.” This was Angus Young’s tune and the performance made that known. Throughout the song, images of the band’s iconic lead guitarist, past and present, flashed repeatedly. Some might call it a fitting home, but it came off rather self righteous.  This much seemed obvious, especially towards the end, as most of the band sat out while the bluesy rocker continued, leaving Young to shred away. Between being elevated on a stage, set in the middle of the main floor, and running up various platforms towards the back, Young made sure everyone and anyone was watching. When he hit the last chord, he stormed off stage, leaving the still flashing screens, which then boasted “AC/DC” in large, fiery red lettering.

As far as encores go, AC/DC’s was pretty expected. You’d have to be an idiot to think they’d leave “Highway to Hell” out of their set list. The 1979 classic brought everyone together, singing in unison, as fire ignited left and right. It was rousing, sure, but soon followed by the cheesy, rather deflated “epic number”, “For Those About To Rock.” The 1981 anthem went over well, but felt dated. Sure, the six exploding cannons made for a great closing ceremony, but it doesn’t hide the fact that the song is pretty abysmal. In fact, one could argue that a more fitting closer would have been, “It’s a Long Way to the Top (If You Wanna Rock ‘n’ Roll)”. 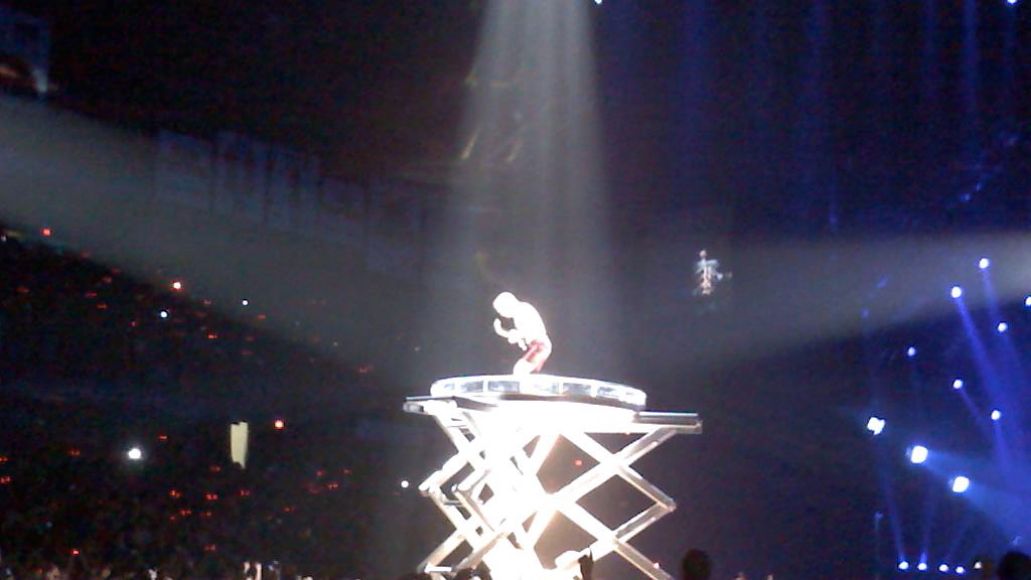 Complaints aside, one thing’s for sure, the Australian outfit still know how to sell a rock show. Even if their image is compromised by the current standards of arena venues, they still pack the house. It’s just not the same. Everything here seems packaged and condensed, a Greatest Hits medley with some mediocre tunes tossed in. That might be okay for a band who’s content with never having reformed themselves, but stepping out of the box, it might be wise to spend twenty bucks on an old performance DVD. At least at home you won’t have to dodge an EMT team, hustling by in a panic to bring back another overexcited (and probably drunk) fanatic.

Then again, that’s a sight in itself. 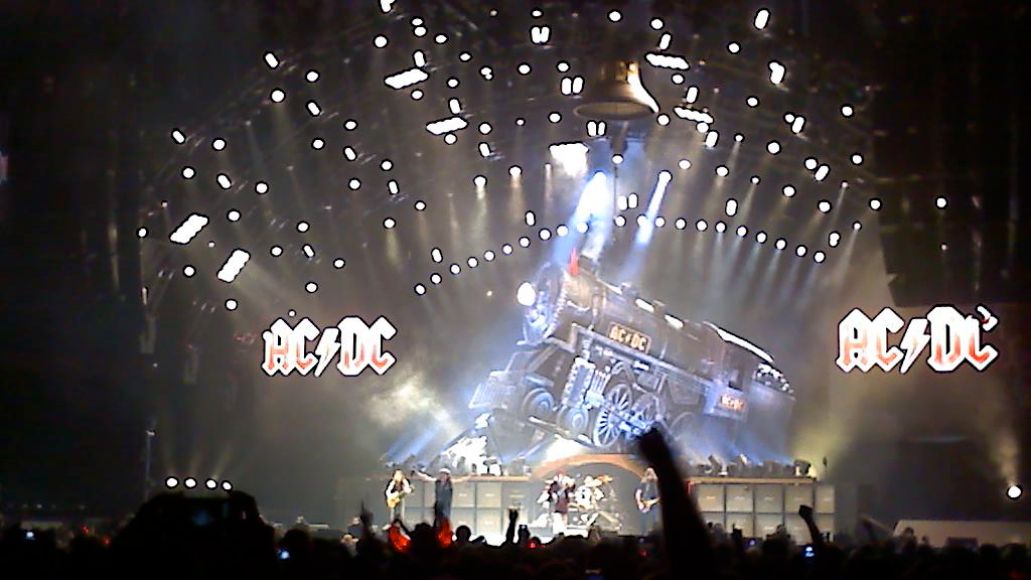 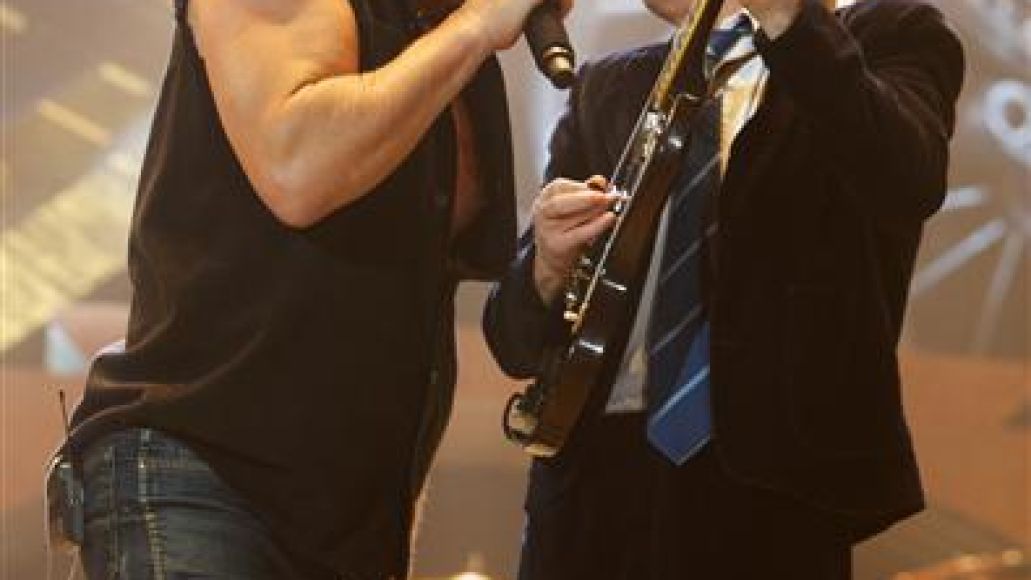 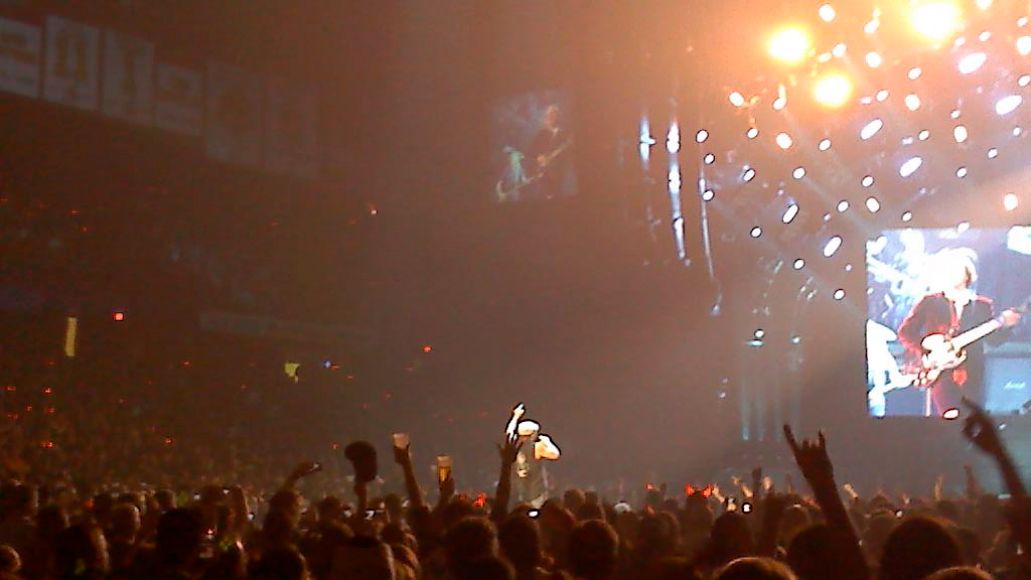