Billy Corgan is hard to work with. That much is obvious after witnessing the famed frontman in Jack Gulick and Daniel E. Catullo III’s in-depth documentary, If All Goes Wrong, which follows the resurgence of the popular ’90s act, the Smashing Pumpkins. The film closely follows Corgan and always humble drummer Jimmy Chamberlin, as the two deal with the pressures, anxieties and complexities of starting an older band into a fresh, new generation. It’s a conflict that not everyone can relate to, but certainly one that holds everyone’s interest for an hour and some change. That’s not even counting the die-hard fans.

As a standalone film, If All Goes Wrong makes the cut. Gulick and Catullo have worked together to create a sharp and sleek documentary that never becomes too seclusive. The scenery is rich, the cutting flows well, and the music never spoils. With many band documentaries, the subject material tends to dry up towards the middle, but the two directors managed to make it all the more interesting, injecting a gooey, dramatic center that’s wedged between two thoughtful bookends. 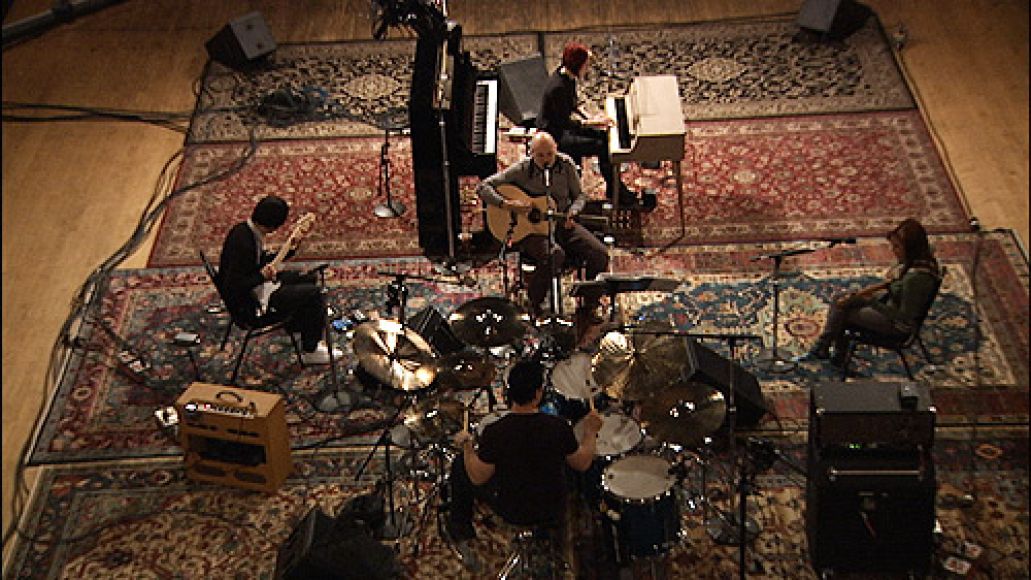 As a film for the band’s long devoted followers, If All Goes Wrong is every fan’s wet dream. Here they have a chance to be one on one with the bald boy wonder. As an audience, they’ll eat, sleep, write, and argue with him. It’s very much Corgan’s movie, but that’s perhaps the idea here. As the songwriter sits frustrated with his acoustic, someone behind the camera asks him to play “Soma”, to which he digresses on how it’s considered both he and former guitarist James Iha’s song, and that Iha’s contributions are meager at best. It’s not necessarily spiteful, but there’s a sense of dread in that co-existence, as if he wants to be 100% of the band.

In actuality, that seems to be the film’s agenda. Even earlier in the documentary, there’s a snippet with a writer, who covered the band in the ’90s, who contends that Corgan has always been the mastermind behind the music, arguing so far that he is the Smashing Pumpkins. Of course, that’s not the case, and Corgan knows it, but one wonders, “Does he?”

To be fair, this film is about a band pushing forward. Corgan’s main aspiration, which goes alongside Chamberlin’s intentions as well, seem to be experimentation, evolution, and the unknown. These are less musicians and more frontiersmen. They acknowledge the expectations of the fans, but they come to terms with their own expectations as artists. The themes involved here are highly accentuated by some sage-like advice from The Who’s axeman, Pete Townshend. It’s one of the finer elements to the whole shebang.

However, there are some other great moments where Corgan comes to life, especially in Asheville, NC, where the band began its first set of residency shows at the Orange Peel. It’s interesting to see Corgan mull over some new songs he’s writing, sure, but it’s outside the hotel room where things flair up. His interaction with a couple of fans, who bring him a clay head sculpture of himself, seems a bit odd, but when he’s discussing religion with a nearby resident, there’s some humanity at play. This seems to break off when the then newly formed quintet traverses across nation to San Francisco, CA, beginning some harsh, brutal residency shows at the Fillmore. 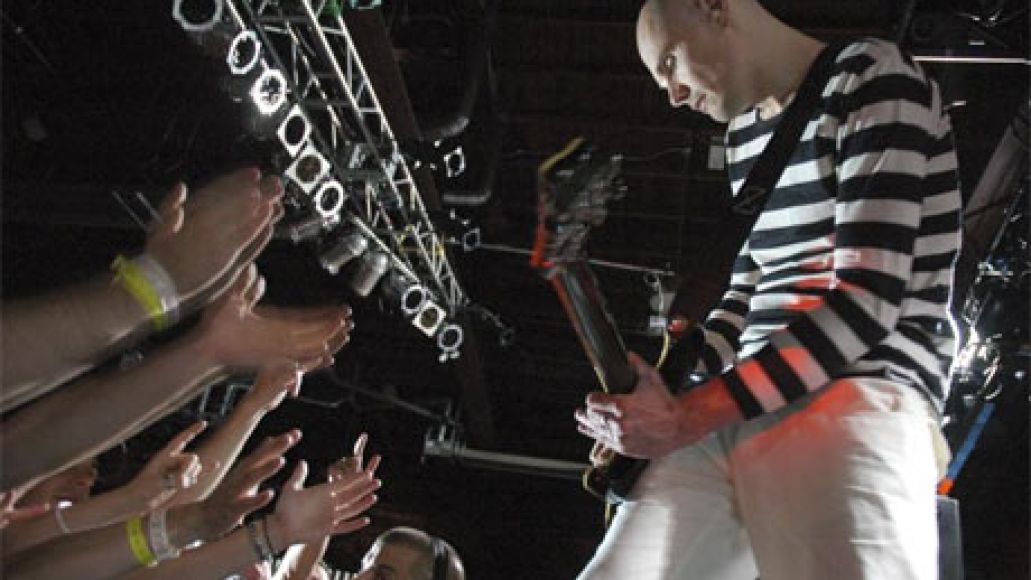 It’s here where the conflict really starts to surface. Whereas the new songs they wrote were received by open arms in the small town atmosphere of Asheville, the urban, more aggressive city folk of San Francisco come off as offended. When the critics’ reviews pour in, focusing on the lack of hits in the set list and the lofty three hour sets, the audience becomes rather antagonistic for the band. Despite the negative feedback, Corgan and the band persist, introducing newer songs, trimming back on classics, and even outdoing themselves, as seen with the epic and rousing riff riot, “Gossamer.” The sprawling number becomes a joke for the band, and they continue to push the song’s limits, playing it for thirty-seven minutes at one time.

There’s a moment between Corgan and Chamberlin, during “Gossamer”, where they exchange glances. The song has aready gone on for over thirty minutes, but the acclaimed drummer shoots for one more measure. Tired and exasperated, Corgan just starts laughing and the band follows suit. It’s a thin slice in a heavy handed pie, but it’s a great moment to cherish, because you’re seeing the two’s fluidity. In a way, those ten seconds prove why they’re still working together after all this time.

Unfortunatelty, it’s a harsh reminder that this is essentially a two man project. By the end of the film, the credits list those who make up the Smashing Pumpkins, acknowledging Lisa Harriton, Ginger Reyes, and Jeff Schroeder. However, this film fails in incorporating them at all. Aside from some two minute introductions, they are essentially what one critic in the film refers to as, “hired guns.” Even when there’s a brief scuffle between Schroeder and a stage technician, he’s mute in the discussion, as if he’s being held back. This is still one of the major gripes with the current incarnation, because the three could essentially bring so much to the band’s present image. Yet one opportunity after the next, they’re brushed aside. 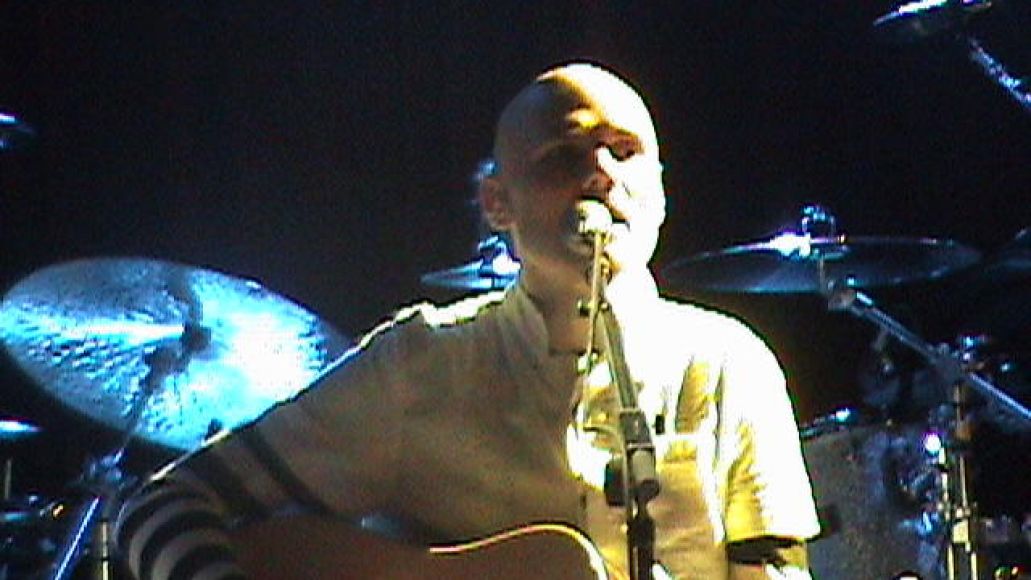 In the end, for those that want to learn more about the mindset of Billy Corgan, then by all means, buy or rent If All Goes Wrong. It’s a refreshing outlook on a man who’s essentially a control freak. This much has always been hinted at in interviews or just through the band’s past productions; however, much to his merit, there’s justification here. When one watches the artist toy with new songs, there’s a sense of honesty to his work that seems lost in most of the artists from his heyday. That being said, keep an open mind, and while this might not sell you on the band’s future agenda, it’ll certainly stop you from scoffing.

If All Goes Wrong will be released on DVD November 11th. You can order a copy for yourself here.

Check Out: The Pumpkins' If All Goes Wrong