Trent Reznor is a perfectionist to say the least. Whether it’s his meticulous attention to sound and engineering on his studio albums or the immeasurable level of quality and production value of the Nine Inch Nails live experience, the frontman doesn’t skip a beat. This being said, it came as no surprise that Saturday night’s concert left me speechless for most of its duration, as I imagine was the effect for all who were lucky enough to be in attendance.

A Nine Inch Nails show is a thrillingly unique experience; it is certainly a concert at its core, but it comes closer to a living work of art than anything else. The surreal visuals alongside the heavy and dark tones that best characterize Nine Inch Nails create a truly breathtaking environment, setting it apart from most else (Radiohead, Tool, and the Flaming Lips shows are comparable).

Before the venue was transformed into Nine Inch Nails’ proverbial canvas, LA hardcore noise punk scenesters HEALTH took to the stage. They had a lot to offer, with their own hardcore take on shoegaze; an enjoyable clusterfuck of harsh echoed screams alongside subdued vocal melodies and pounding drums, but the songs tended to be repetitive after a while. The crowd was not into it at all, and towards the end there was a great deal of booing and even some unkind gestures (I’m talking about the use of the middle finger). The band was certainly not awful, in fact far from it, but some fans don’t know how to be polite or respectful at concerts and to them I say, “please learn.” If it’s not your cup of tea, fine, but keep it to yourself. 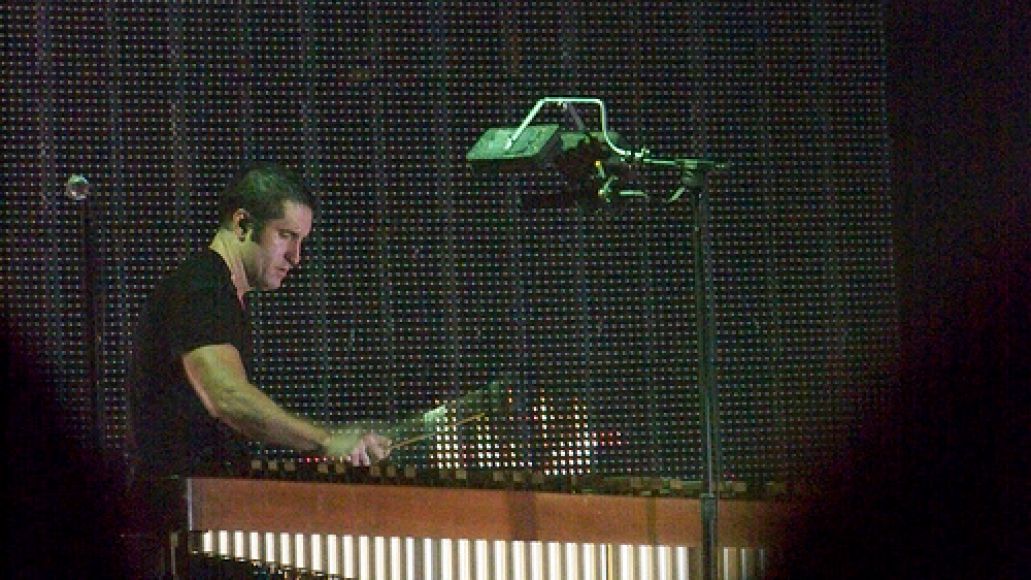 After the unwarranted disrespect, HEALTH exited the stage and the audience grew anxious in preparation for what was to come. A considerable amount of waiting followed before the lights finally cut off, and the intense suspense inducing “999,999” introduced Reznor and his touring band to the stage before they broke into a rather heavy rendition of The Slip‘s “1,000,000”. The tone was immediately set: hard. Surprisingly, the crowd was pretty tame during the beginning songs from this year’s release, but just as Reznor addressed the crowd, “Come on pigs . . .” to introduce The Downward Spiral‘s “March of the Pigs” all hell broke loose as I found myself fending off the newly fashioned mosh pits that surrounded me. Luckily this was rather short-lived, but would return for later classics such as “Head Like a Hole” and “Terrible Lie”.

As the show continued, I found myself continually asking if what I was experiencing was indeed real or just a figment of my imagination. After one mind-bending visual element came to a close, it was immediately topped by the next. It became so crazy that I at one point turned to my friend and stated, “I don’t know how much more of this I can take.” Of course, I only meant this out of love. I was truly stunned by the aesthetics, and was eager to see what other curve balls would be thrown our way. Let’s just say these guys know how to throw ‘em.

The key to the show’s visual brilliance was the unique light set up. What can best be described as a wall of chained lights hung from the rafters, in fact there were three of these. They could be raised and lowered as needed, and each time they were, they were made use of in almost a completely different fashion. One set of lights would occasionally mask the band from the front, as another hung behind the members, and the third was used for other various effects. The interaction between these screens/walls/chains of lights created some of the most intense visuals I have ever laid eyes on. Most notably was the performance of With Teeth‘s “Only”, during which a wall of static shielded the band from sight, aside from a hole of darkness in the front wall which followed Reznor around, before the static dropped down to reveal the entire band set against the backing screen. Also of note were the instrumental performances off of this years Ghosts I-IV, which utilized the lighting and screens to almost transport audience members to various locations. There was the desert, the mystical forest, a light speckled metropolis, and some sort of smoke filled blue landscape. I know, it’s hard to picture, but hopefully some of my photographs will do it some justice. 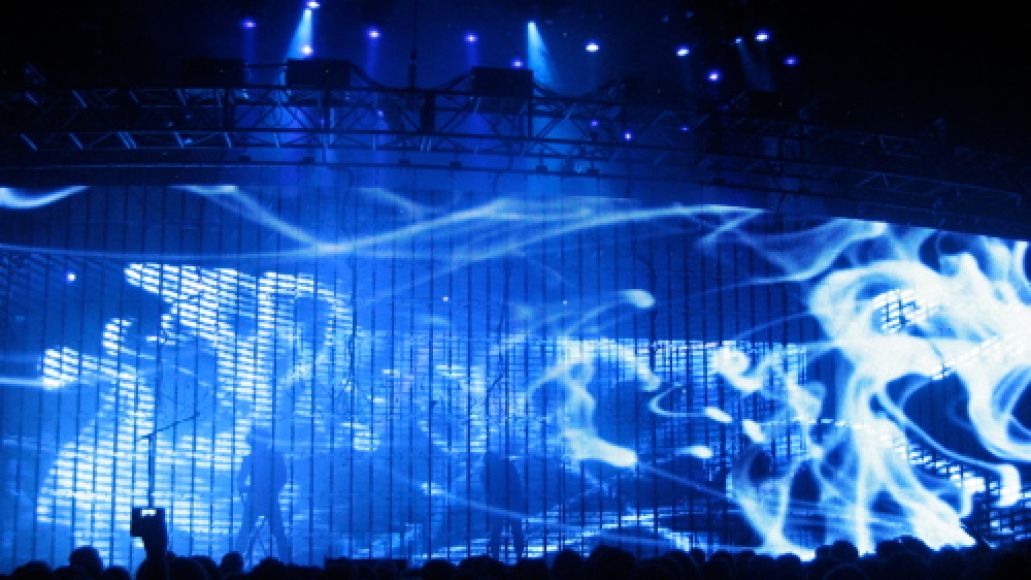 The song selection was quite strong as well, flowing smoothly and containing a great deal of variety. Ranging in slower piano led ballads such as “The Frail” and “Hurt” to headbanging classics such as “Closer” and “Terrible Lie” and through to the more danceable With Teeth, The Slip, and Year Zero tunes, the setlist indeed spanned the band’s long lived catalog.

As the set came to an end, one of the screens lowered from the ceiling equipped with a bright red Nine Inch Nails emblem. It would have been a perfect ending to a great show, but of course, the event was not over yet. Reznor and his band would return for five more songs, including a stunningly gorgeous performance of “Hurt,” among others. As Year Zero‘s “In this Twilight” came to a close, each member signed off individually, leaving Reznor alone at his keys before waving himself off. For a band characterized and written off by many as mere “industrial rock,” there is certainly a great deal of unrecognized beauty in the music. Mandolins, xylophones, and cellos all made appearances throughout the performance, attesting to this fact. As Reznor stood alone at his piano, he provided a final reminder of this, and left a lasting image for fans to exit with. Nine Inch Nails fan or not, every music fan should get a taste of the awe inducing experience that is a NIN performance.

Setlist:
999,999
1,000,000
Letting You
Discipline
March of the Pigs
Head Down
The Frail
The Wretched
Closer
Gave Up
The Warning
Vessel
Ghosts 5
Ghosts 21
Ghosts 19
Ghosts Piggy
The Greater Good
Pinion
Wish
Terrible Lie
Survivalism
Ghosts 31
Only
The Hand That Feeds
Head Like a Hole
Echoplex
God Given
Hurt
In This Twilight 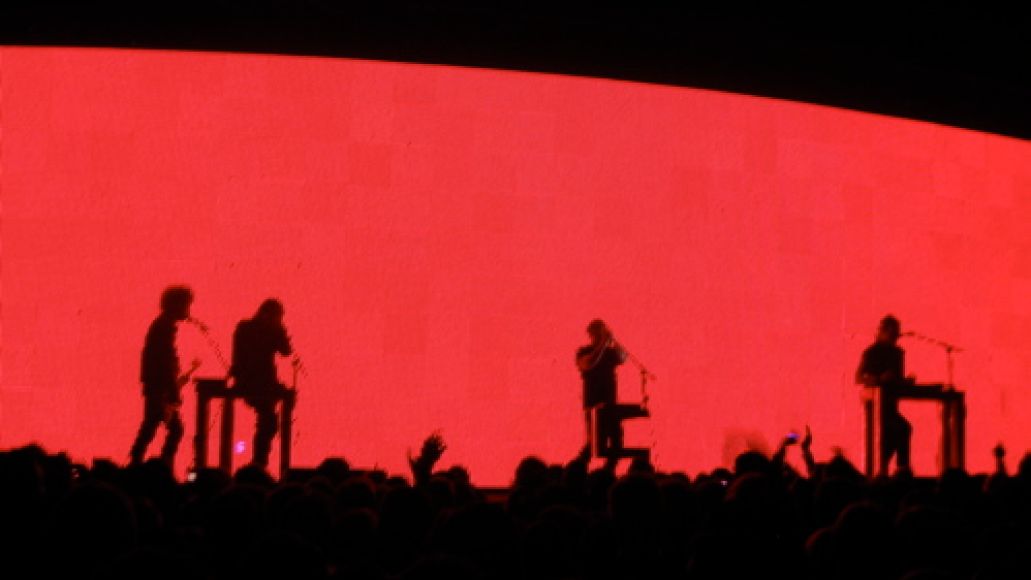 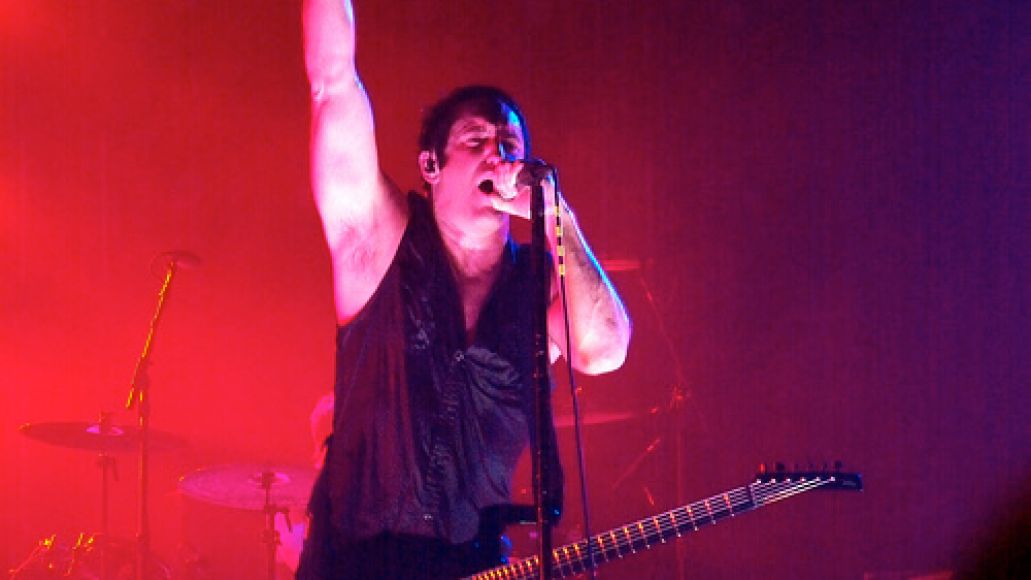 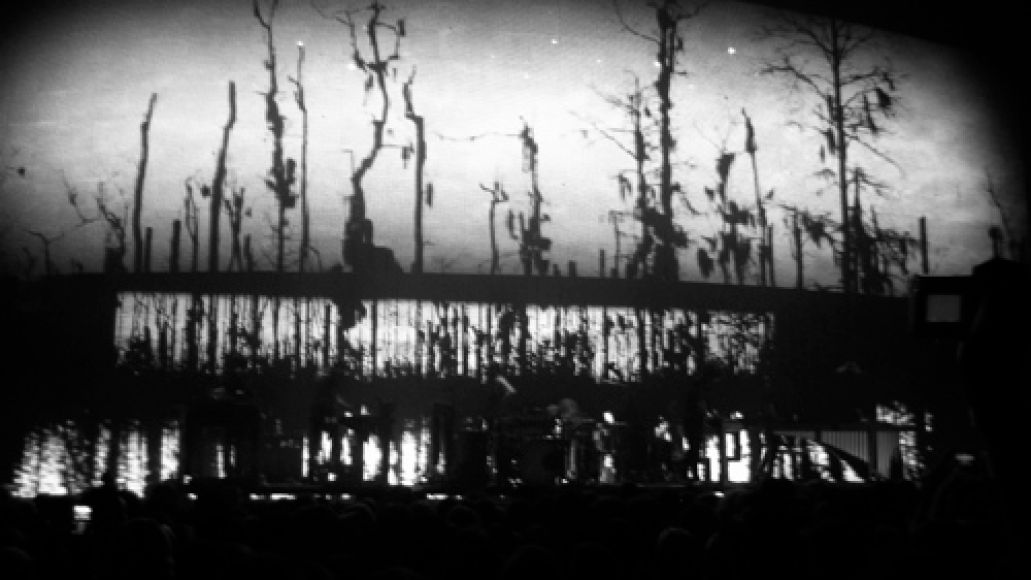 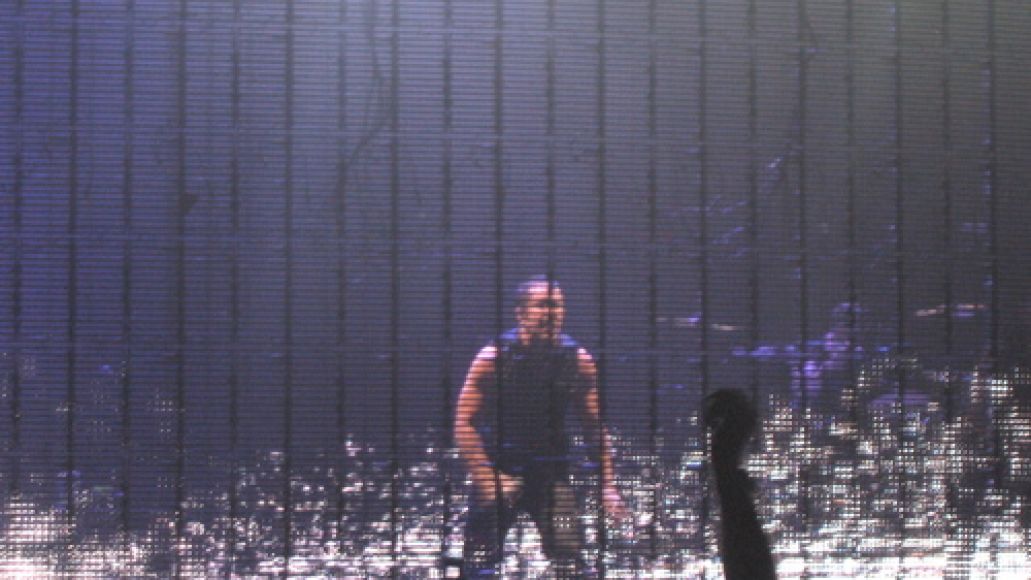 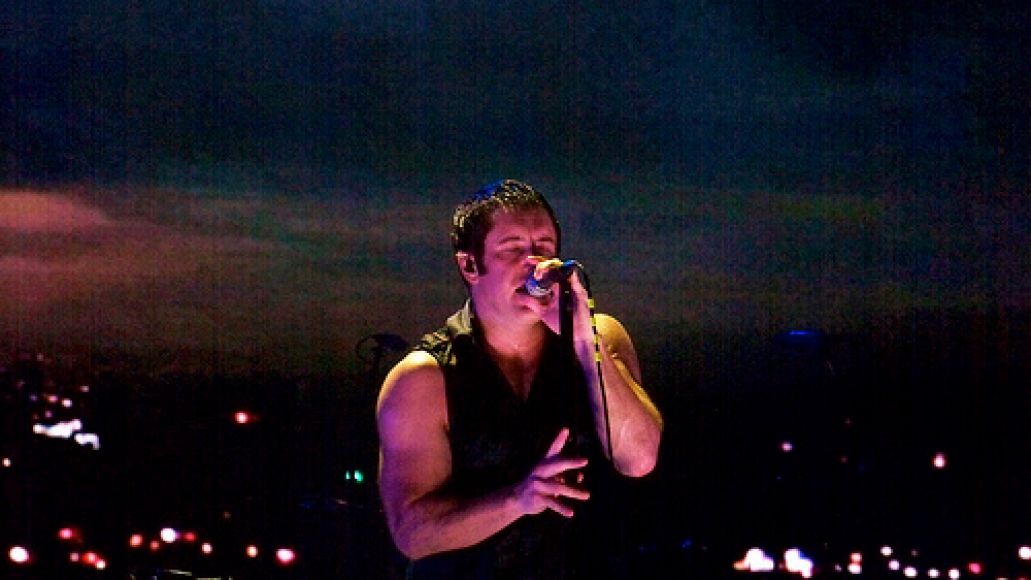 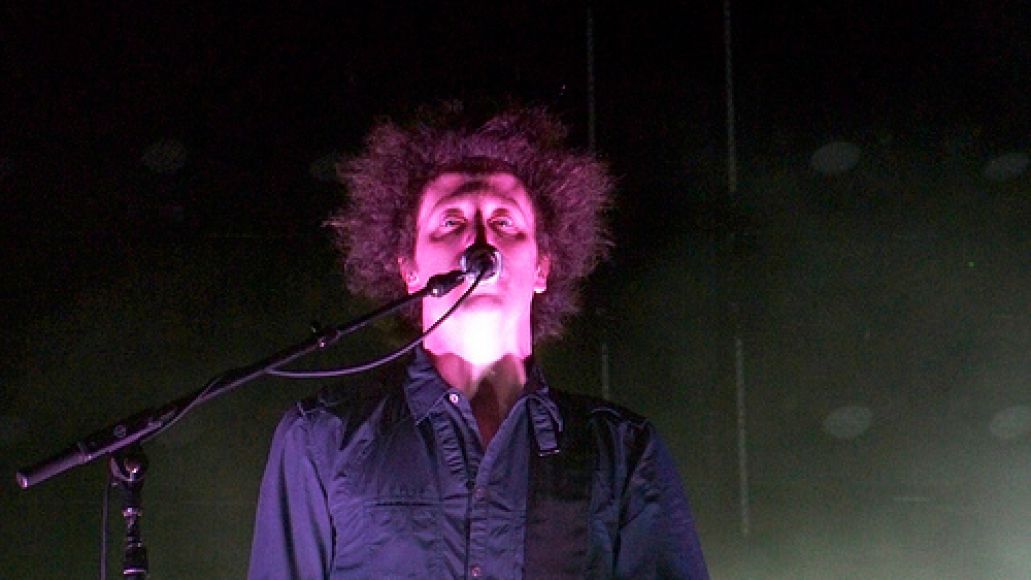 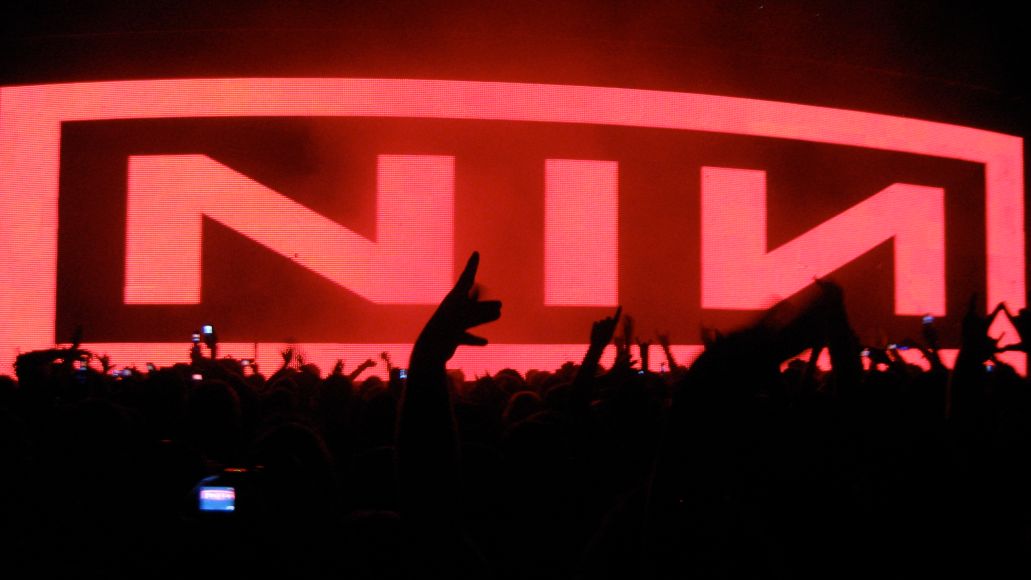 Nine Inch Nails light up the sky in Manchester (11/8)