Every year since 1998, Christmas has been given the epic, guitar facelift by a crew of people known as the Trans-Siberian Orchestra. My wife introduced me to their music about three years ago with a copy of Beethoven’s Last Night, a concept album built around his final night on Earth. Naturally I was intrigued, so after a few calls and some last minute planning I surprised my wife with a gift; that being the band’s fall 2008 concert at Greensboro Coliseum in North Carolina. 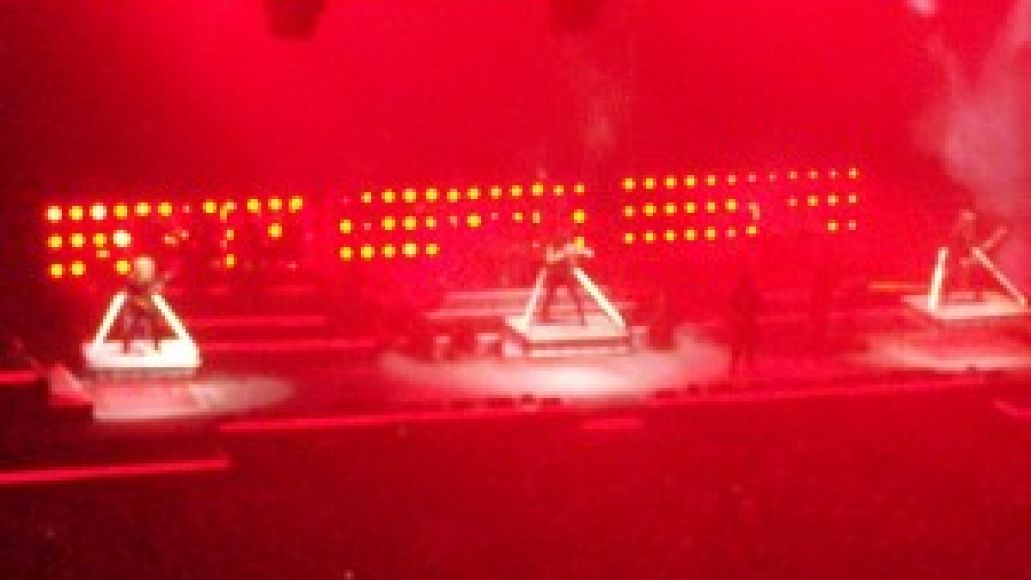 We entered the Coliseum’s top level and after a brief interlude with will call, slackened security, crowds of families in holiday attire and a line for over-priced refreshments, we managed to be seated on the upper level of the auditorium. Overall, entering this concert was not nearly as hectic as other rock concert excursions. No blending in with mosh pit groupies and metal-head security detail here. The atmosphere felt that of a Broadway musical opening which lots of semi-formal wear and Christmas sweaters galore cemented the event’s all ages demographic.

As my wife Coleen and I got comfortable on the Upper Level of an overhauled basketball arena (Pepsi-sponsored Mega screen included), we waited about a half an hour before the lights went down and a booming PA announced New York City’s very own Trans-Siberian Orchestra. The electric group consisted of an eight piece string accompaniment, two keyboardists, two guitarists, a bassist, various members trading vocal duties, a drummer, two electric violinists, nine choral singers, and a narrator. Talk about a Christmas army! To top out this extremely festive group of musicians, the lineup also includes Savatage and TSO founders Jon Olivia and Bob Kinkel.

For those of you who have never seen TSO concerts, a worthy description just doesn’t do it justice in words; given that, I shall do my best to please. Enjoy.

The entire show is split into two sections:

Section I – A Lost Christmas Eve

With brief narrated interludes before and in between, the set began with “March of the Kings” and “An Angel Came Down” (from their 1996 debut, Christmas Eve and Other Stories).

The story told of an angel soaring around the world, observing different cultures celebrate the season in their own way while witnessing disturbing events such as war and famine. The story in this context came provided by an old homeless man (later assumed the angel itself) in an “old city bar” on Christmas Eve to a random stranger. One of the 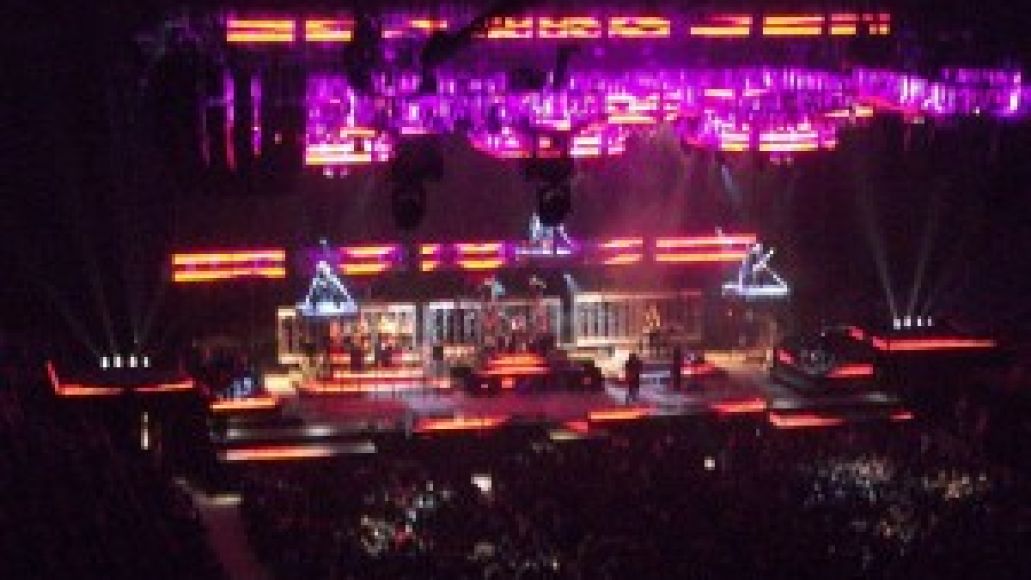 wonders of an evening like this was that no matter what religion was celebrated, everyone could gather together and enjoy a night of real festivity and joy despite the differences.  Christmas based its roots in Christianity, but its true message like music itself, spans the boundaries of any belief structure. The messages of peace, hope, and goodwill to thy neighbors sang joyfully throughout the night at the coliseum.

The entirety of Section One essentially presented a musical Christmas story.  Curtains of LED lights, lasers, imitation falling snow and the works befell us at the arena for our enjoyment. Electric violinist Anna Phoebe highlighted every string accompaniment with her own brand of well executed stage presence. Everything in the room felt electrifying and soothing, with shades of blue shining from scattered spotlights around the auditorium. During the song “The Prince of Peace” (from Other Stories), vocalist Jay Pierce (subtly resembling the demeanor of the narrator) entered center stage, boasting an operatic voice akin to true church echo as he sung and spoke to the audience. Everyone turned in awe of his power over the overall mood in the room, and I’m sure random church-goers who attented the show felt the thrills of his talented display.

Here we entered into “A Mad Russian’s Christmas”, a real dance extravaganza which featured music familiar to anyone who has ever played the original Tetris in their lifetime and seen Fantasia at some point as well.  Occurring afterward came the radio staple “Christmas Eve/Sarajevo 12/24” which plays ubiqutiously anywhere this time of year, but is truly better live.

This section being easily embraced by every age and musical taste, I rank it as one of the best holiday shows ever. The only downsides included crappy seating and lack of artificial snow for anyone not in front of the stage at ground level.

It was sad to say that a few cheerful families began exiting during this portion of the show. It came not as a reflection on the quality of the concert, but as a departure from the venue after realizing that the Christmas portion ended. A broad introduction of individual players from TSO segued into a performance of various other songs not attributed to winter celebration.

This began an onslaught of theatrical marvels, featuring my personal favorite: a rendition of “O Fortuna” from Carl Orff’s Carmina Burana, some anthem-based Beethoven, and other classical hits featuring pyrotechnics of all kinds and smokescreen effects. This was not at all overshadowed by Jennifer Cella’s brilliant operatic vocals as she and electric violinist Anna Phoebe eventually ran through the ground level crowds onto 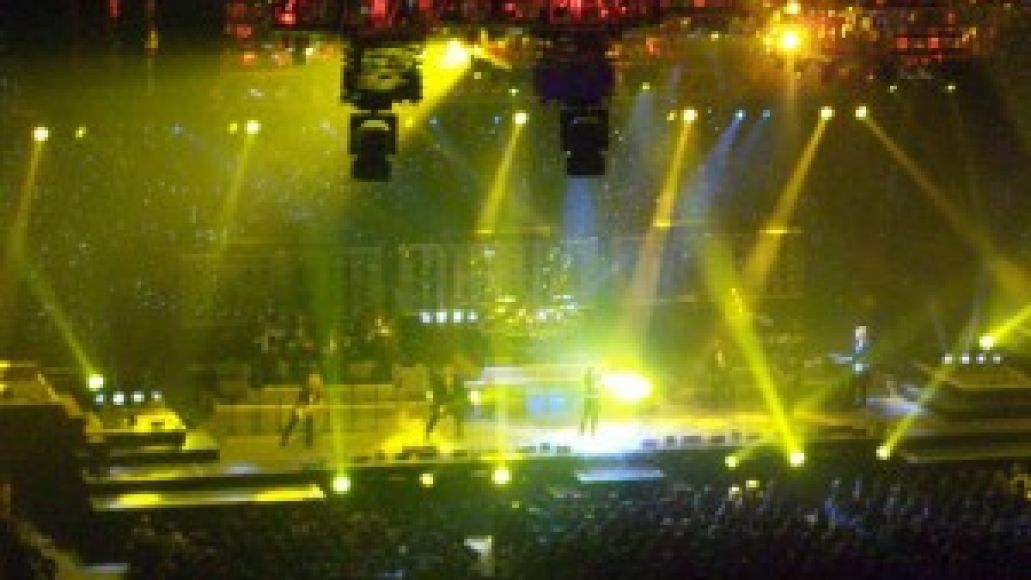 a platform that was hoisted gingerly into the air during the final number.

I’ll be perfectly honest at this point. My taste in music leaned more toward this moment in the show since I enjoyed greatly classical music and rock.  Despite the minor corniness watching players with ’80s hair perform on guitars vigorously while donning tailed tuxedos, it actually added to the atmosphere that this was a symphony orchestra on acid.  More lasers, more explosions and more lighting effects became more prevalent during this section of the show.

More than likely the main reason for such grandiose performances lay in the fact that this was their 10th anniversary of touring around the world. This carnival of classical music turned rabid spectacle never ceased to amaze the public, primarily during another staple set list contender, “Wizards of Winter” from The Lost Christmas Eve (the only yuletide inclusion on this section of the show).

Overall, the hype surrounding Trans-Siberian Orchestra nevertheless was dead-on. Whether you took your family for a night out or got some nostalgic feeling hearing 80s metal fusing with Mozart and Pachelbel, it never gets old regardless whether it was your first time, or one time too many. I couldn’t get enough of these Savatage members flaunting their prowess on stage turning what was originally perceived as novelty into an annual event equivalent to Barnum & Bailey (minus the lions and tigers and bears). 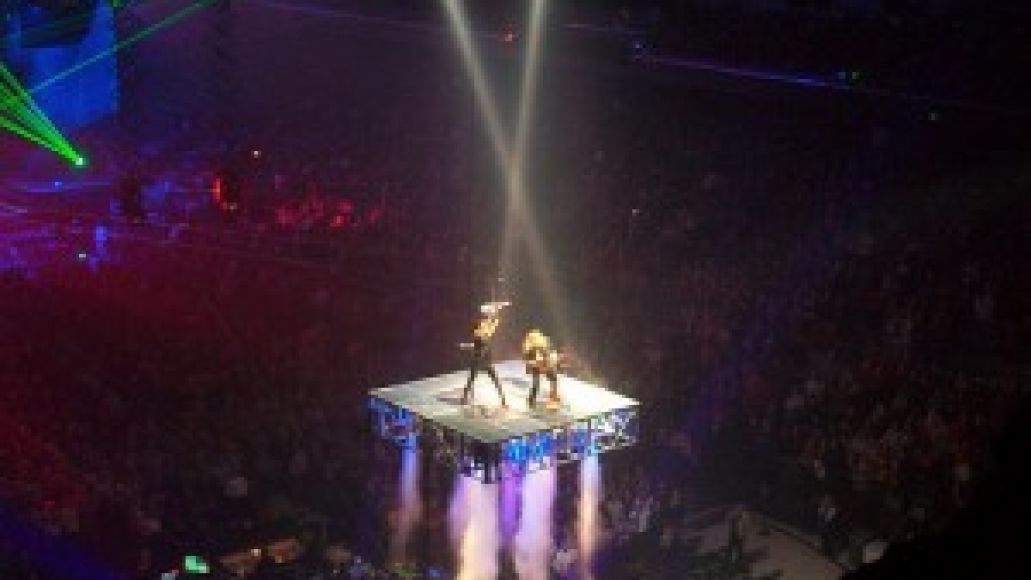 I seriously recommend this, no matter what music you’re into.

Special thanks to JR Thompson for photo support.