Concerts can be some of the most exhilarating moments of one’s life, sometimes taking our breath with mind-blowing stage setups, thrilling light shows or just a really fun crowd. But how much of this actually has to do with the band’s performance versus who’s in attendance that night? It all boils down to one major question: does location matter? Now, there has always been something about London. Everything and anything has always seemed so much better there, so much more unique; the necessary seasoning to make any entrée flawless. So, when I noticed one of my favorite bands was playing in London, it seemed only fair to take the opportunity to take in the sights of London and find out if shows really are better overseas.

Picture a day where nothing seems worth doing, or just imagine a torrential onslaught of ice cold rain soaking you inside out as a chilling icy wind brushes against your face. This was what the weather was like on the night Montreal’s electrofunk duo Chromeo came to London. As the never ending line outside the Shepherds Bush Empire slowly inched us closer to its opening doors, we were overcome with despair, but in the end all of our suffering eventually paid off. Once inside, we were immediately awarded with a nonstop dance party that quickly dried us off and made us so warm, we wished for a small draft of the icy air outside!

Now, Chromeo had one of the most elaborate stage set ups I’ve seen in a long time. Completely caught up in all the “Christmas cheer” that this season always brings, Chromeo set the stage to the theme of a holiday homecoming, complete with both festive lights and decorations. We’re talking about the whole shebang here: mics stuffed in stockings, their signature sexy leg keyboards decorated with icicle lights, all surrounded by presents adorned in silver lining, with the tinsel gleaming brilliantly under the many iridescent lights that flickered gracefully across the stage. They even put up a fully dressed Christmas tree for Christ’s sake! 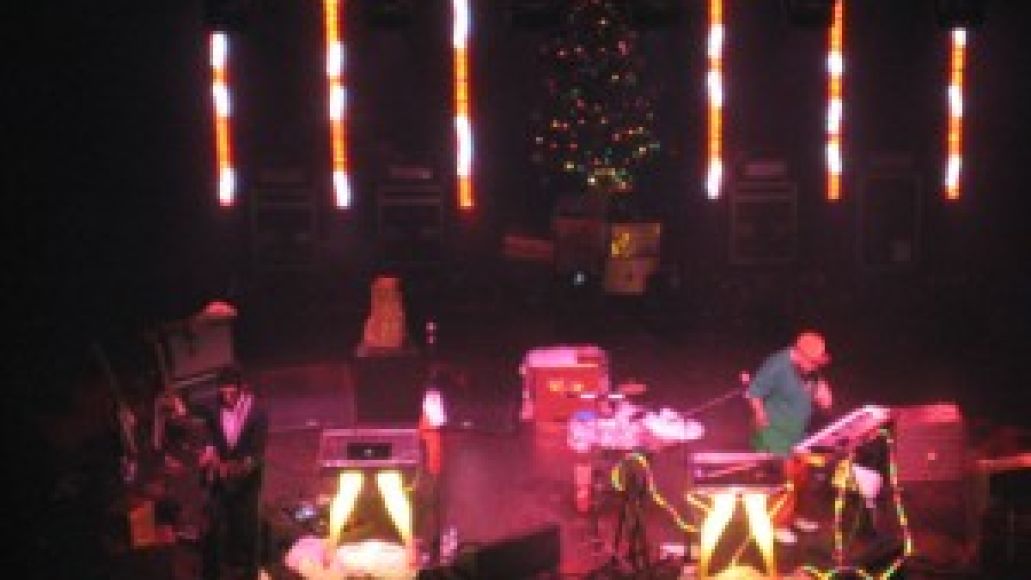 At the time, the set up seemed a tad bit unnecessary, but that may have been because it took so long to organize. Thankfully, we were attended to by DJ Mehdi (Chromeo’s personal DJ friend), who kept us drunk with anticipation and dancing with glee. Then, as the time neared, people began hollering “Chromeo-oooh-ooh” repeatedly for about 8 minutes straight! Shortly after, a sense of relief filled the air as the “Intro” track from Fancy Footwork began to play, obviously marking the duo’s official entrance on to the stage.

From behind the many strobe lights, cutie boy David Macklovitch (a.k.a. Dave 1) walked out, decked out in a suit and some fly white sneakers, only to be shortly followed by Patrick Gemayel (a.k.a. P-Thugg), who was lounging in blingin’ gold chains and those famous baggy boy jeans; altogether, many girls’ hearts started to flutter. And so, the ultimate end of the year bash was finally starting.

A dance party is never complete without a good audience and Chromeo made sure we were up for it by providing us with streamers and thanking us multiple times for enduring such bad weather just to see them perform. Now, this place was packed wall from wall on all three stories and not a moment went by when the crowd wasn’t frantically dancing to the beat or cheering loudly; some with a beer in hand, others with glow sticks.

The madness started with “Outta Sight” which broke a little sweat as our faces gleamed with joy, hoping already that this night would never end. Next up, was the funky fresh track “Me and My Man” that allowed Chromeo to mark their territory with the rather domineering lyrics: “This is the new sound/we came to get down/our name is Chromeo/and we are in control.” And man were they ever! Between P-Thugg’s brilliant talk-box jams and vocals, and Dave 1’s toe-tapping guitar riffs, we got everything we came out for and more! And the crowd didn’t give the band a moment to rest either, immediately starting to chant “Chromeo-oooh-ooh” at the end of every track! Dave 1 tried to reassure us that they weren’t going anywhere anytime soon and even promised to play us the entire Fancy Footwork album (which they did)! 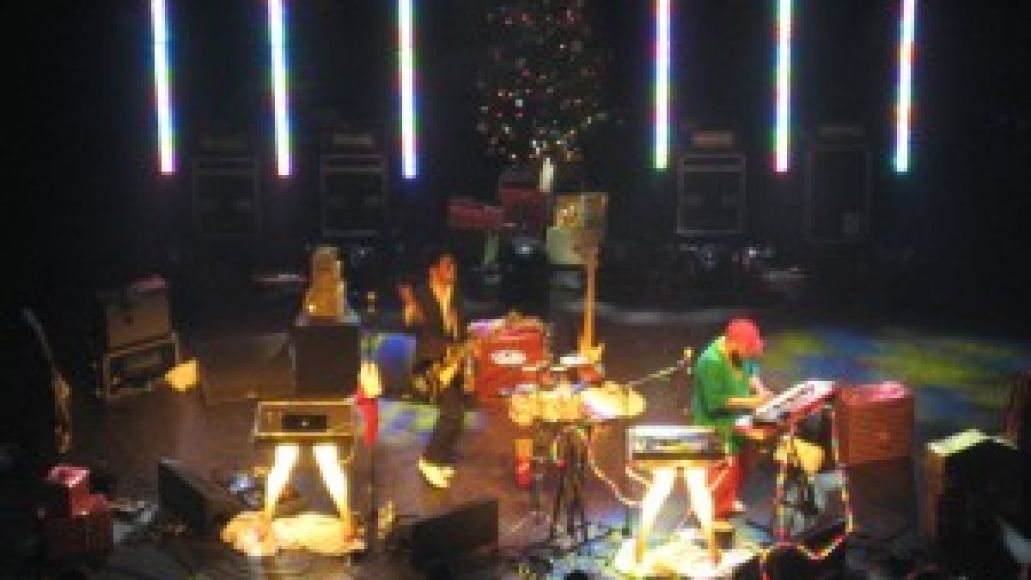 It seemed as if the party would never end. Between the boomin’ bass of “Bonafied Lovin’” and the oldie “You’re So Gangsta”, dedicated of course to all the lovely Londonites on the dance floor that night, nobody seemed to mind. Then again, these weren’t your typical fans, either. Everyone seemed just as decadently dressed as the band and even a few guys nearby in the pit were donning velvety pimp costumes, feathered hats and all. Such devotion found recognition from the performers, and everyone was treated to the incredible crowd favorite, “Fancy Footwork”. However as the song neared it’s end, you could see the band growing a bit exhausted, explaining why they abruptly cleared off the stage after they finished the song.

Before we even noticed they were gone, the two “righteous dudes” were back to it. As if to complete the Christmas stage experience, the two were sweating under Santa hats that seemed all too fitting. Naturally though, they kicked it slow for a bit, this time with the laughable “Momma’s Boy” and then an unexpected, yet very classy cover of Journey’s “Don’t 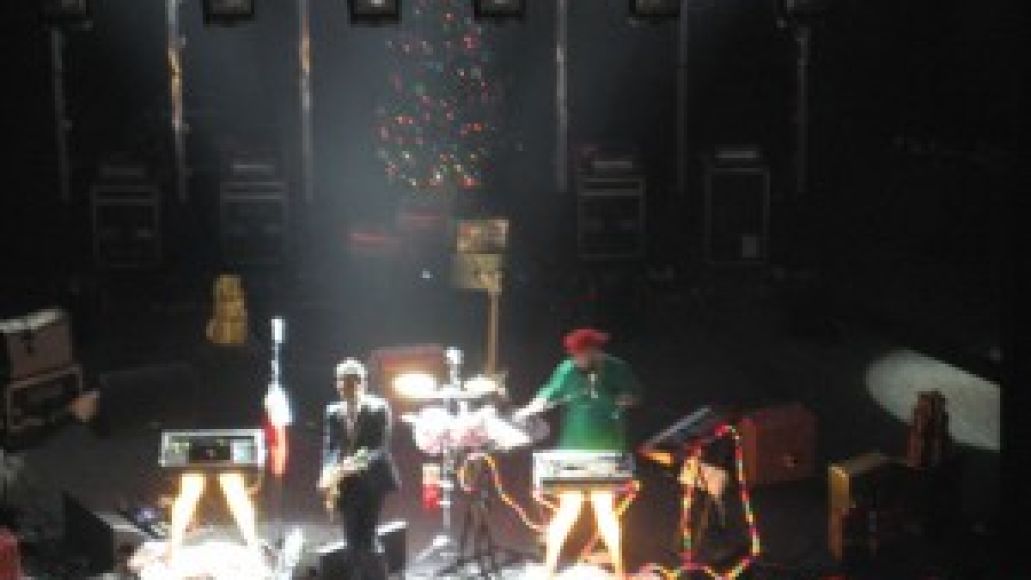 Stop Believing”, the latter which they had a little bit too much fun playing. The break didn’t last too long, however, as things began rocking out again with “Waiting 4 U”, “My Girl Is Calling Me (A Liar)” and “100%”.

At this point, the band had been playing for about an hour and a half, so we started to become a bit unsure on how much longer this fun would last. Much to our disappointment though, our worst fears were confirmed, and the show was concluded with the next track, “Woman Friend”… or so we thought. Surprising the entire three story audience, Dave 1 announced that although Chromeo was done for the night, both of them would be out in a jiffy to jam out with some of their DJ friends! The announcement left a majority of the crowd pretty pumped, but a few of the more responsible attendees cleared the auditorium in fear of missing the last train home. Seriously, London knows how to party until the break of dawn.

So, if you ever happen to get the chance, London is definitely the place to see your favorite bands perform. Everyone seems to be a little bit more pumped, the drinks are never ending, no one ever thinks to stop dancing and apparently most venues don’t have a set closing time, so they are in no hurry to push the bands out and start cleaning up. All in all, London is fun, so start saving up for that plane ticket because there is always a killer act coming through this town.

Setlist:
Into
Outta Sight
Me and My Man
Tenderoni
Call Me Up
Needy Girl
I Am Somebody
Opening Up
Bonafied Lovin’
You’re So Gangsta
Fancy Footwork
Encore:
Momma’s Boy
Don’t Stop Believing (Journey Cover)
Waiting 4 U
My Girl Is Calling Me (A Liar)
100%
Woman Friend