In the long history of music, ’80s tunes seem to be the candy aisle in the proverbial music supermarket. With the atmospheric synthesizers, the abundance of spandex in assorted neon colors, and the awkward yet fancy dancy, there’s something about the “genre” that continues to surface over time. Whether you’re a fan of Jan Hammer or Oingo Boingo, it all comes back to one thing: nostalgia. If there’s one thing this music capitalizes on, it’s the listeners memories. These tunes take the listener way back, and even if they weren’t alive then, they’ll discover the somewhat embarrassing decade and find solace in it. One band that might lead you down memory lane, or the road to discovery, is Electronica-punk act, Das Gluv.

The band’s MySpace insists they’re from Berlin, Germany, but that’s just part of the whole image. This rambunctious quintet is from the great city near the lake, Chicago, and they’re beginni 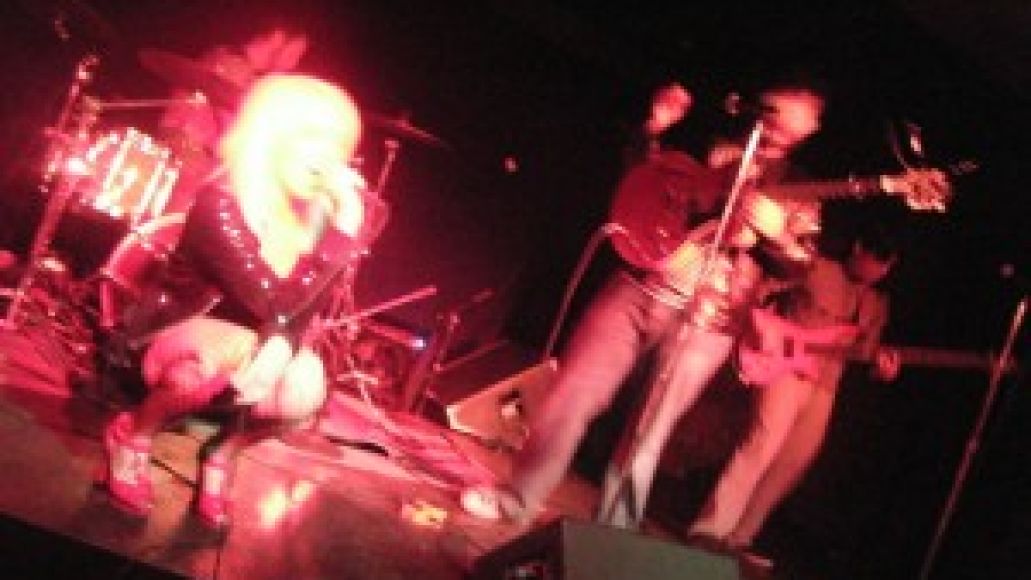 ng to break into the scene here. With both a male and female vocalist, Fancy Bob and Laura Lovekill respectively, this overall ’80s throwback is so much more. To limit them to the ’80s would be unfortunate, as they share a liking to modern magic makers: Modest Mouse, The Faint, and even Franz Ferdinand. It’s dance punk, if you want to get right down to it, and it’s a hell of a blast.

There’s the pop and punch of “Devil Inside”, the rather eccentric “Secret Admirer”, and the spacey-“Monster Mash”-like madness in “Jenny”. All of the band’s available tracks exhibit a tension that’s more or less hokey, and that’s where it’s accessible. Sometimes you just have to let out some steam, and Das Gluv is perfect for that. On stage, it’s only amplified. Watching the five perform live is quite the sight. Lead vocalist and guitarist Fancy Bob, behind some very Kanye-like glasses, shakes, rattles, and rolls, while to his right, there’s Laura Lovekill, who not only exhibits the sexual prowess of a 1980’s Darryl Hannah, but carries a great tune or two herself. If that’s not enough, watching keyboardist El Rigo spin his multi-instrumental wisdom over Barn Darlington’s percussion is enough to jostle the mind. For the less extreme, there’s always bassist Betelskar Gurlbenga, keeping it cool towards the back of the stage.

Altogether, this might sound cheesy as hell, but it’s not. The band makes a grand effort to poke fun at themselves, while also keeping the knife close to its chest. They’re brutal, but without the blood and macabre that’s, in a spin of irony, cheesy itself nowadays. If anything, they’ll make that Jack n’ Coke at the bar worthwhile, too.

Is that good enough for your Friday night?