When not writing new albums, releasing greatest hits, or preparing for Super Bowl Halftime shows, Bruce Springsteen has spent a good part of 2008 collaborating with some fellow high-profile musicians. Tom Morello joined Bruce and the Crew for a rendition of “The Ghost of Tom Joad” in April, which also went on to win our award for best onstage guest appearance of 2008, while Alejandro Escovedo helped out on “Always a Friend” a week later. And of course, more recently, the Boss and Billy Joel teamed up for a pretty astonishing, and expensive, performance in support of Barack Obama.

But it took the holiday season to get Springsteen together with New Jersey’s two other famous music heads. During last night’s Hope Concert IV, audience members got quite the bang for their buck when Bruce took to the stage and joined Bon Jovi, Southside Johnny, and the other numerous acts who had descended on Red 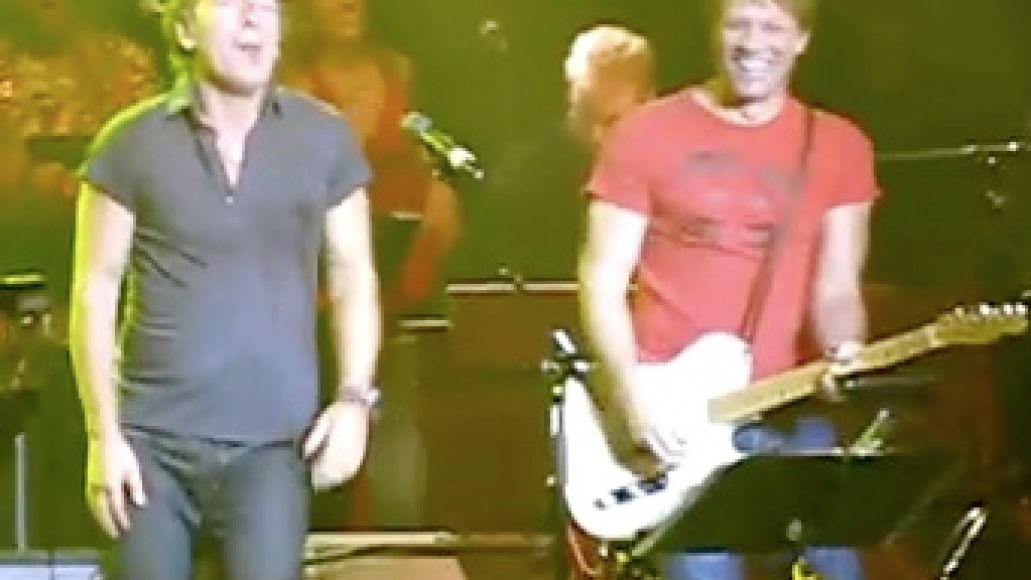 Bank, New Jersey, for a surprise performance. As usually the case with all Springsteen related news, we’ll let Backstreets take it from here:

Springsteen’s surprise appearance came at the end of the night, as he joined the house band and a few of the bill-toppers for a few Christmas songs, two classic covers, and one of his own…

Happy holidays!” said Bruce, otherwise a man of few words tonight. (Leave the quotables to Southside: “I’d wish you a merry Christmas, but it would be out of character” and “I get so sentimental, I have to drink myself into oblivion.”) Springsteen opened his own set with a doubleshot of his holiday B-sides, “Merry Christmas, Baby” followed by “Santa Claus is Coming to Town.” Southside — “Mr. Grinch” — joined in on the latter, and LaBamba came downstage to take Clarence’s part, “you better be good for goodness’ sake.” (LaBamba and Mark Pender brought the horn section headcount to eight for Bruce’s set.) After Bruce went it alone on “634-5789,” Bon Jovi came back out to split the vocals on “Tenth Avenue.” And a final encore, as Springsteen was joined by Southside, singing lead, and Bonds for a rousing “Havin’ a Party.” Weather outside: frightful. Inside: plenty hot.

Fortunately for those non-attendees, a couple videos of the surprise performance have since surfaced and as you will see, foster further proof that Mr. Springsteen is by far the coolest musician alive. I mean, what other man leaves leaves tingles in your body and Bon Jovi starstruck just by gracing the stage?

“Santa Claus is Coming to Town”