Chicago loves Cursive. That much was obvious last night at Schubas, on the sold out, third night of Tomorrow Never Knows. People were everywhere. If they weren’t huddled at the bar, they were frolicking to and from the photo booths and restrooms, making the cocktail waitresses’ jobs that much more complicated. These were dedicated fans though. Nestled in the small yet cozy corner, the band’s merchandise booth saw heavy sales, with every other patron slamming twelve bucks down for a vinyl or an artsy t-shirt. That was four hours before the Nebraska natives would even hit the stage. 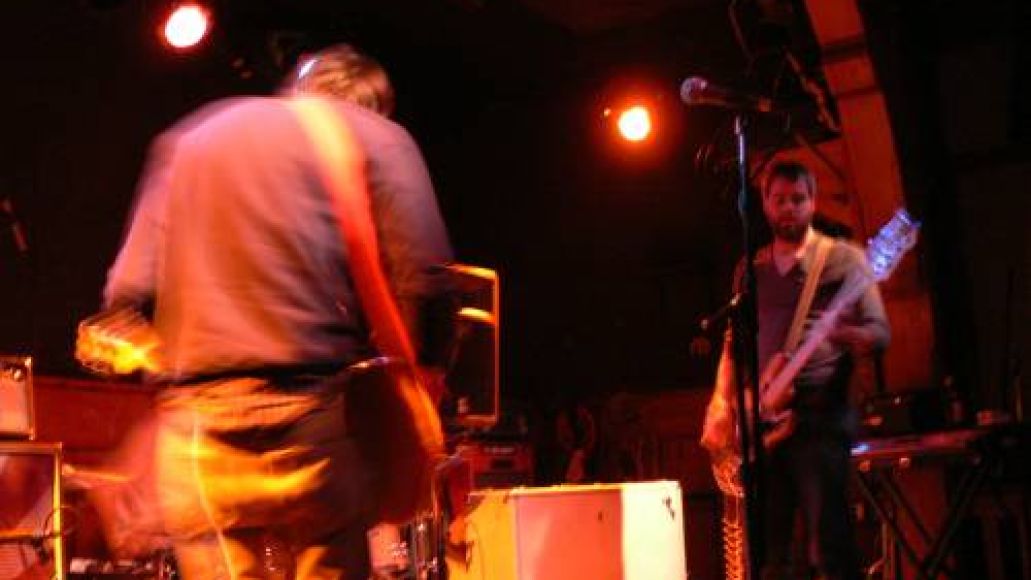 The Alabama shoegazers, All the Saints, who opened the night, benefited from the dense crowd. Although a trio, the band’s overall sound was so heavy that it sounded much like a quintet. The bass, while muddled, offered an ambient backbone for the guitarist and drummer to scrape away at, which together blended into a beautiful sonic painting. Unfortunately, much of that energy was unused by the group, which remained static throughout the thirty minute set. The crowd seemed behind the act however, and with good reason.  The trio of feedback enthusiasts have a pretty wild thing going here. They just need to exhibit it on stage.

Between sets, the crowd thickened some as more bar patrons left their drinks-or took ’em along-and honed in on the white-suited quartet. While they could have been mistaken for one-fourth of the Polyphonic Spree, Oklahoma indie-poppers Colourmusic held some of their own. “Tonight’s show is brought to you by…the color orange,” someone announced on the PA. Immediately after, melodies, dreamy harmonies, and machine gun distortion followed suit, all to accentuate what is commonly referred to as indie pop. A few more flocked in mid-way through, if not for the sound then for the radical performers, who scuttled about on stage. 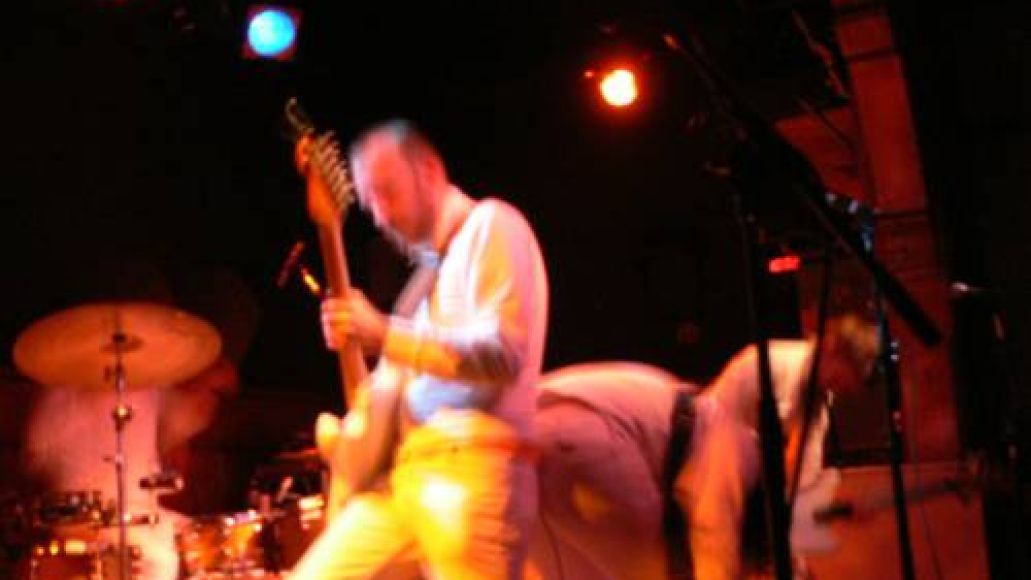 One would be hard pressed to know it was close to sub zero temperatures outside as the venue became warm, balmy, and awkward. Warm because of the few hundred in pea coats, balmy as they all started breathing on one another, and awkward as discussion flared through Miles Benjamin Anthony Robinson‘s set. Regardless of the audience, the Oregon songwriter carried out an amicable forty-five minute set. When he wasn’t strumming away at his accessible brand of folk rock, the humble yet benevolent singer threw out a few Leonard Cohen covers, which went over well. When he wasn’t joined by his pianist, he was rocking solo, and there’s something admirable about that, especially in light of all the surrounding acts.

If it was awkward before, it was downright pitiful throughout the moments leading up to Cursive’s set. Fans continued to flood the bar’s adequate yet not so spacey environment, coughing and spitting up whatever brew they downed minutes before. One sweaty and exhausted fan popped out of the mass and back into the bar, where she fell down in a two minute coma. Some joked about Great White’s fiery debacle years ago, which followed with nervous laughter. However, when the Saddle Creek heroes took the stage, there was a relative cool that permeated throughout the audience. 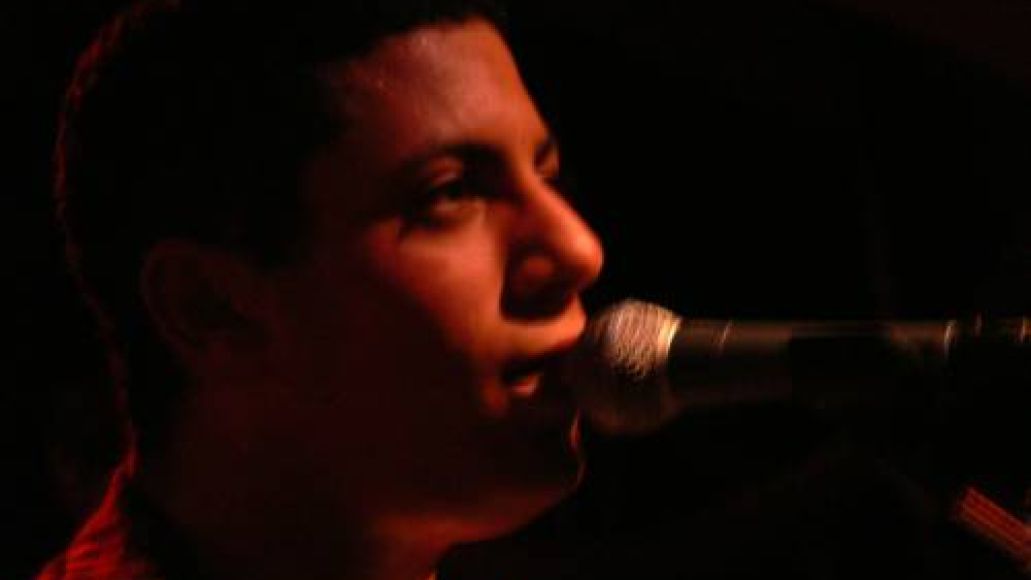 As if to save time, vocalist Tim Kasher slammed right into a torrential set, which included a healthy and wholesome collection of the band’s back-catalog. During the hour-long performance, Kasher and co. exhibited some emotional energy that roped in the sold out crowd, who clapped, screamed, and cried along. There wasn’t a moment lost on the quintet and seconds after each song, they were headstrong into the next. Some highlights included the rich and vibrant “Art is Hard”, off of 2003’s The Ugly Organ, the speedy harmonics of Happy Hollow‘s single “Dorothy at Forty”, and the hammer and wail of “The Casualty” from 2000’s Domestica.

It was obvious the band were stretching their legs some, itching to go back to the new school hardcore of late, but don’t write them off as nostalgic artists just yet. They were debuting new material left and right, packing the set with tunes from their upcoming, and long-awaited, follow-up to 2006’s Happy Hollow. Since the addition of the horn sections and organ pieces, the band’s sound has really found a new bottom to work from, and what’s surprising is how cohesive and attentive the set managed to be in light of that. 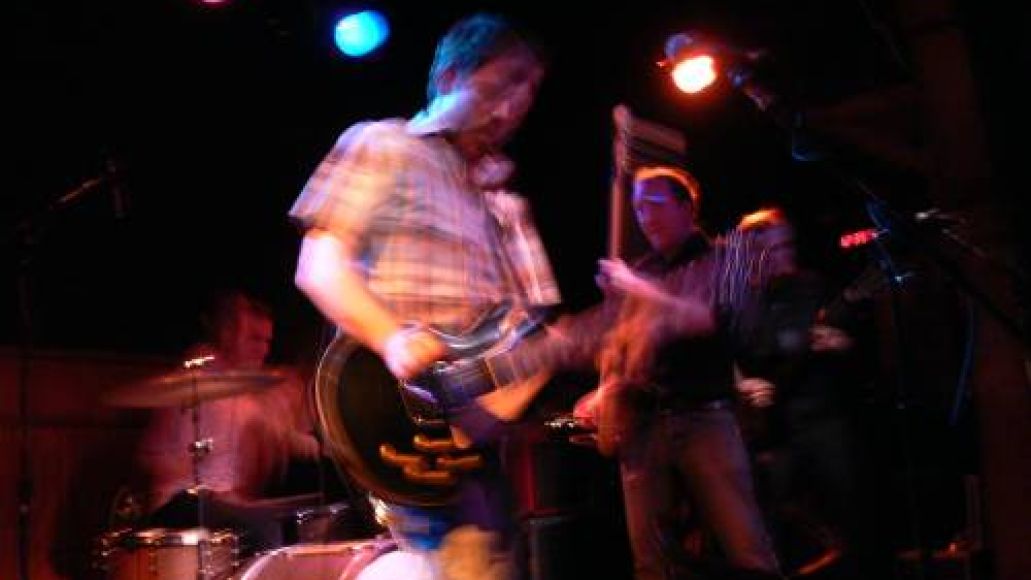 Sixty minutes and some fifteen songs later, the Omaha quintet said farewell to Chicago and whisked off the intimate stage. Though most of the audience was asking for more (“The Recluse”, anyone?), there was hardly any grumbling as they made their way towards the exits. Three days in and Schubas’ winter music festival finally found its legs. Here’s to Saturday and Sunday! 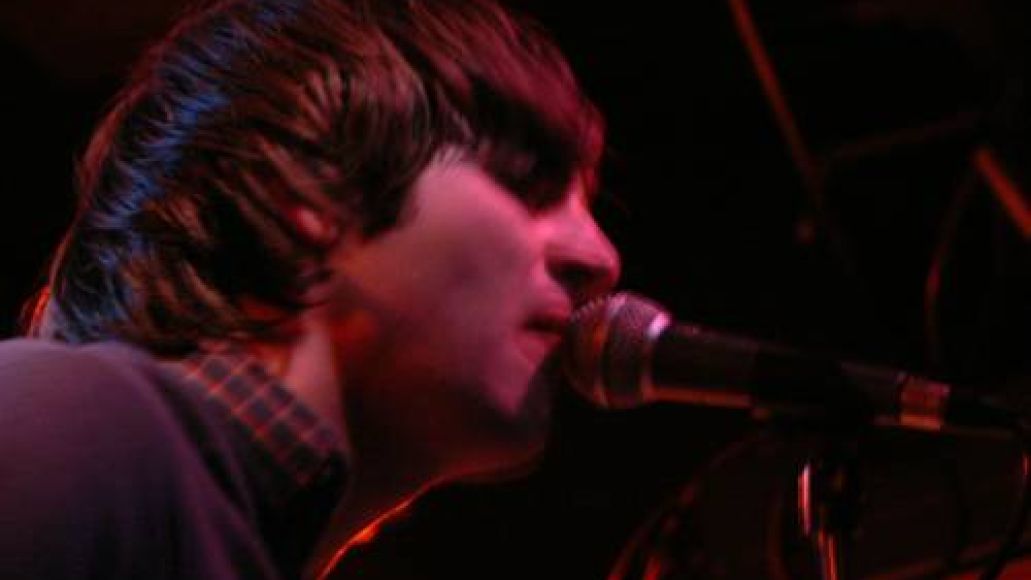 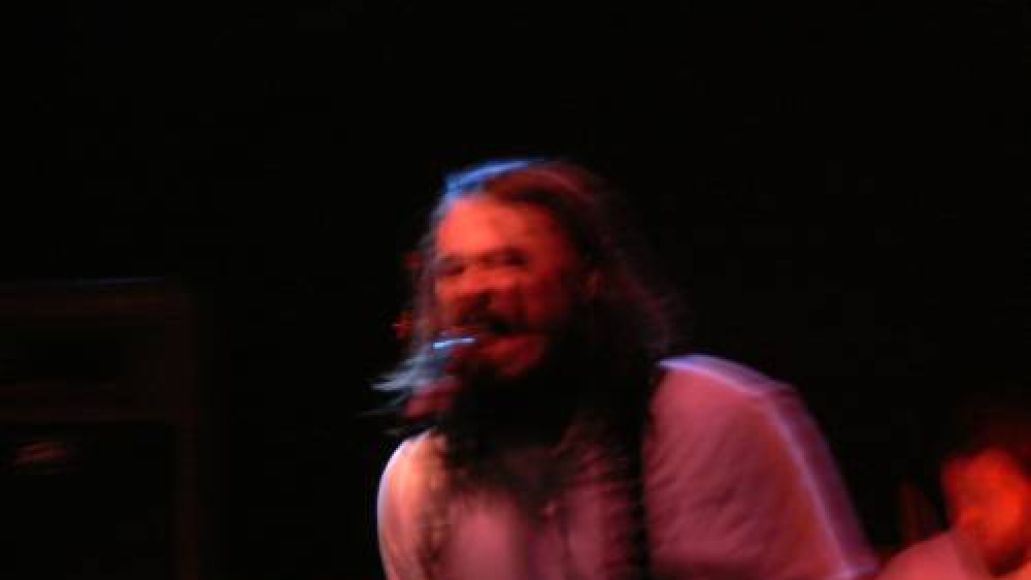 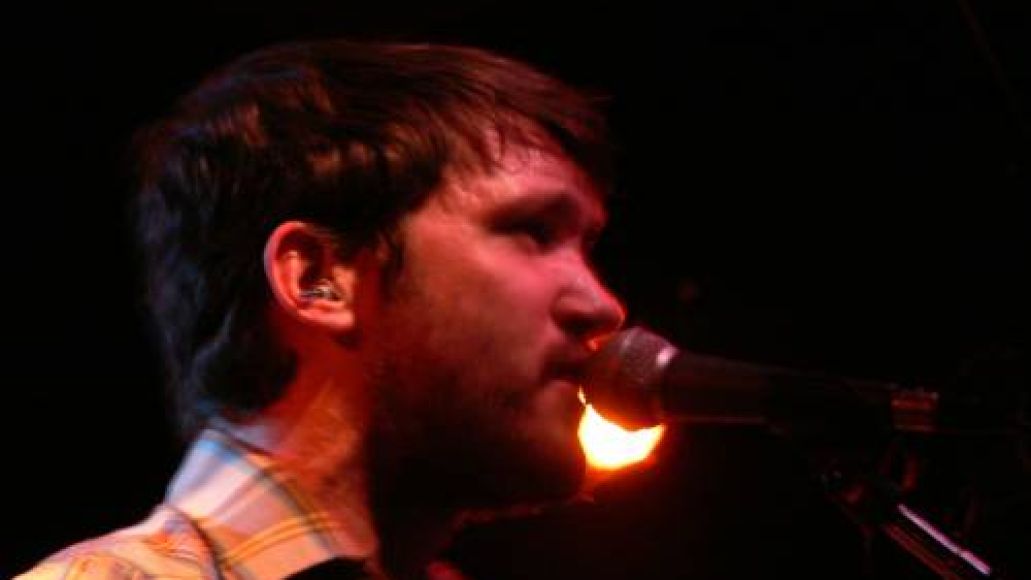 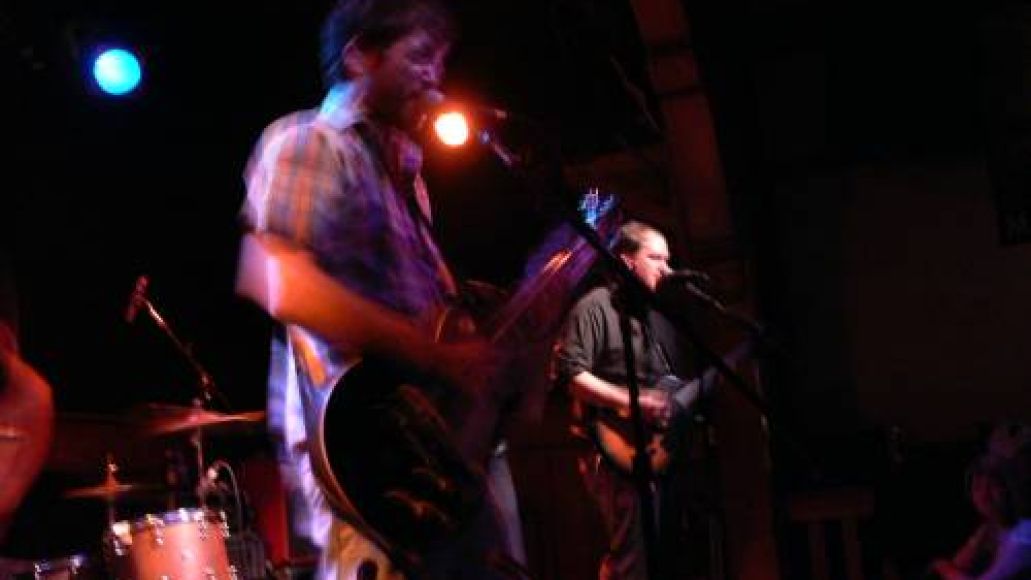 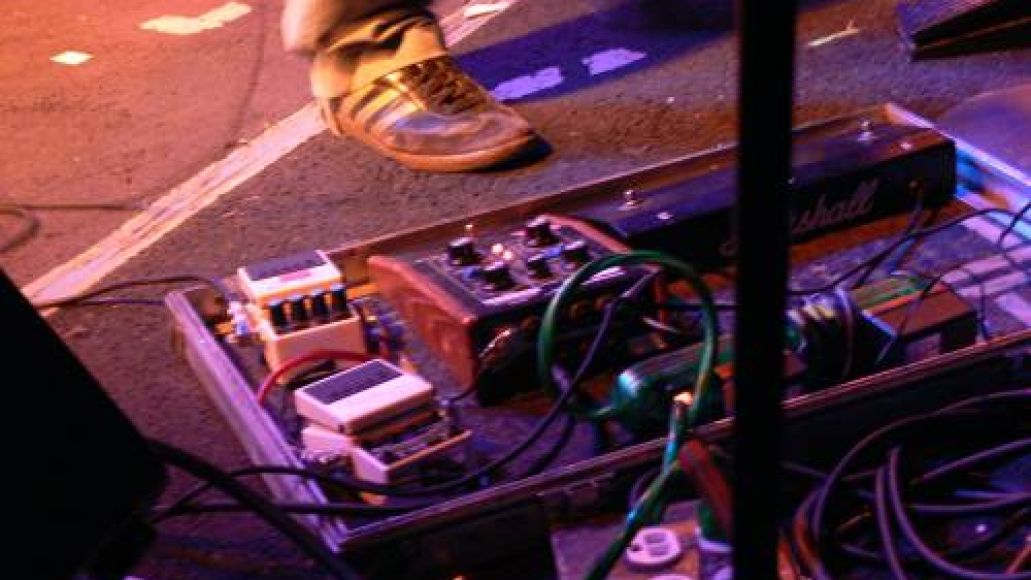