Let’s face it. Amidst the current economic environment, all of us are being a bit cautious on how we spend our money. So when an opportunity like Harvest of Hope presents itself, one can’t help but embrace the St. Augustine, Florida based music festival.

And that was before the newest round of lineup additions.

As we first mentioned a few weeks back, Florida will play host to not one, but two music festivals during the weekend of March 6-8, 2009. That’s because the folks over at the Harvest of Hope Foundation have decided to organize a three-day music extravaganza during this time, with all proceeds going directly toward the aid of migrant farmers. Initially, the lineup appeared to favor the punk side of the music spectrum with Against Me!, Bouncing Souls, Lucero, Mute Math, and Monotix among the early confirmees.

However, remember that new round of lineup additions we mentioned a few paragraphs up? Yeah, well, that brought a multitude of new acts, spanning nearly every genre, along for the Harvest of Hope ride. The National, DeVotchKa, The Virgins, Ra Ra Riot, HEALTH, Wild Sweet Orange, Grand Buffet, and Murs are among those acts highlighting the most recent lineup offering. So are Bad Brains, Propagandhi, The Faint, Hammell on Trial, Holy Fuck, and our good friends Look Mexico. Need I say more?

That’s ok, because we still haven’t mentioned the fact that you can get this unbelievably awesome eclectic lineup for just $29.50! Yep, the prices hasn’t change since we last checked, even after all these additions. Plus, all proceeds benefit a good cause.

Check out the up-to-date lineup on our Harvest of Hope Outlook page. Or you could just scroll down and check out the official poster… 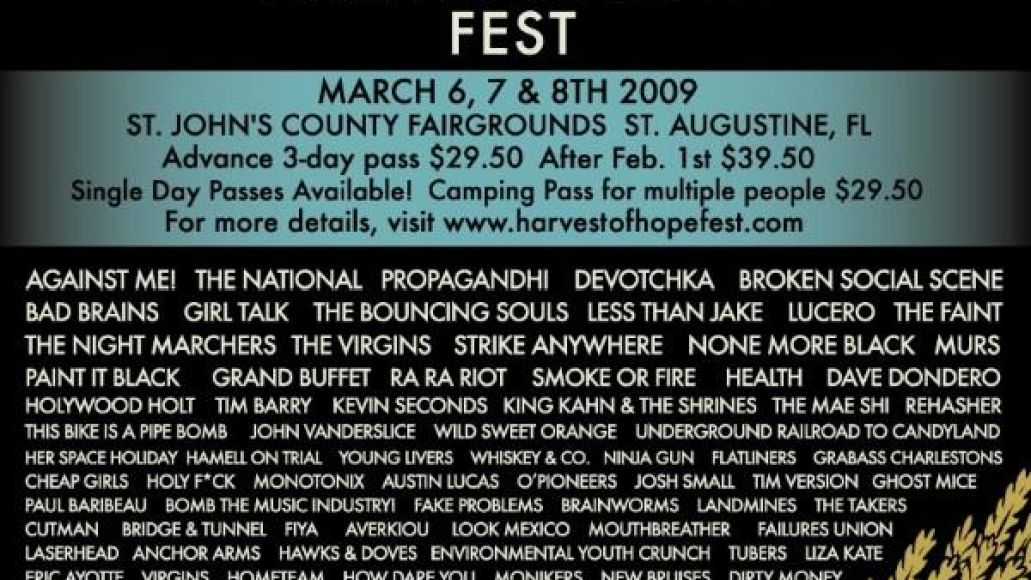