The Godfather Part II and The Dark Knight are two of the greatest sequels ever produced. Some would argue these films surpassed their predecessors, and I would be hard pressed to argue against such sentiments. But do these sequels have hit songs or (much more importantly) hit videos? Absolutely not. Imagine if The Godfather Part II had a disco song about Hyman Roth. Envision The Dark Knight with a Lil’ Wayne song produced by T-Pain about that one guy…uh…you know…the guy who had previously played Spawn. Fortunately, one sequel in 1983 recognized the opportunity, and seized it.

By 1983, audiences must have been clamoring for a sequel to a movie that had dated badly. So, to their delight, producers went into production on a sequel to Saturday Night Fever, a film that launched Travolta’s roller-coaster career. If you take out every other working director at the time, who else could have directed such a sequel than “Rocky” himself, Sylvester Stallone? Who could possibly take over the reigns of songwriting duties from The Bee-Gees, whose 1977 soundtrack had already reached legendary status? Who other than Sly’s baby brother, Frank Stallone?

The biggest hit from Saturday Night Fever was the song “Staying Alive”, so they couldn’t very well make that the big hit single off of that film’s follow-up. Fever was an R-rated film about street tough, Tony Manero, trying to, well, “stay alive” in the streets of Brooklyn by becoming a disco king (who didn’t back then?). Alive was a PG-rated feature about the same kid, who, naturally, has become a struggling, yet well-groomed dancer trying to make it on Broadway, who felt his career was “far from over.” And a song was born!

Now, a song like “Far From Over” is too big to have been written by one mere mortal, even if that mortal is Frank Stallone. Fortunately, Vince Dicola was available to help out (Dicola went on to write “The Touch” from Transformers: The Movie). The ridiculously bad music video (I mean “awesome”) would take the song to another atmosphere neither Stallone nor Dicola could have imagined…

The video begins right away as we see the swagger that is Tony Manero. Whoa, he’s a long way from the mean streets, isn’t he? And he’s managed to score Jennifer Beal’s workout clothes from Flashdance! After having to wait a torturous fifteen seconds, the man himself finally appears, wearing a red shirt and a matching red head band. The leather jacket he wears is to remind us he is in fact aggressive. 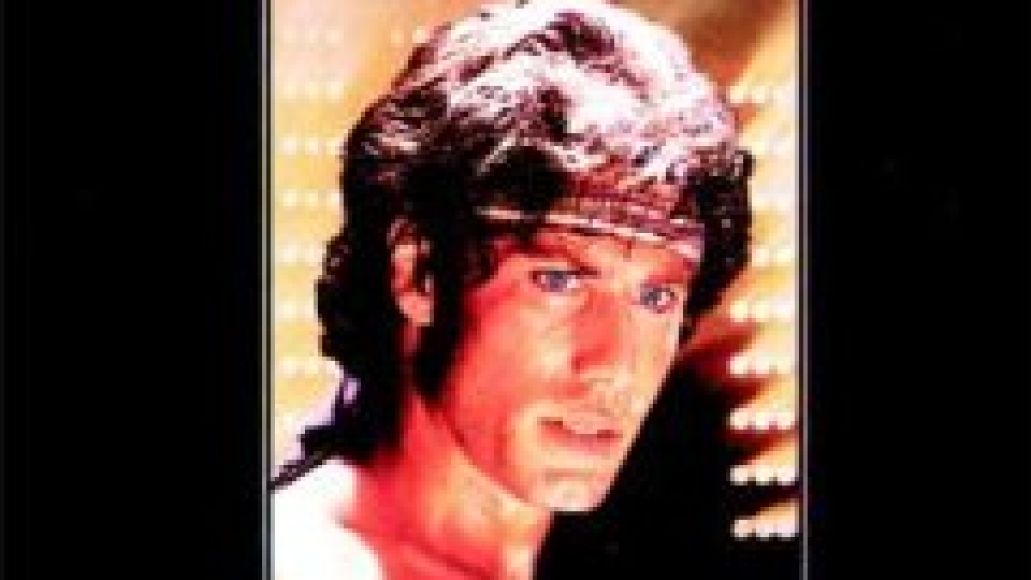 Images from Staying Alive continue to wash over the screen. We see Rocky run into Tony, who looks rather confused. Despite rejection after rejection, Tony has time to purchase/steal one apple. Via a public payphone, Tony gets a gig! He gets to work with Richard Marx’s wife as well as Ted Wass’s girlfriend in Blossom.

If you think Tony has moves, check out the dance entity that is Frank Stallone. Moving to the beat gracefully, with guitar in tow! Then…a shower scene? Oh, okay. There is a full recap of the entire video to set things right again. I was getting lost.

“Far From Over” was somehow Frank Stallone’s only hit, reaching number 10 on the Billboard charts. Sly’s little brother has since appeared on reality shows and low-budget video fare, but to his credit, has managed to avoid soft-core porn. In the ’90s, he became the butt of Norm McDonald jokes on Saturday Night Live, where McDonald would give lil’ Stallone credit for random facts, such as this one: “And, finally, the votes are in and Entertainment Weekly has chosen its Funniest Man Alive. And who is the Funniest Man Alive? You guessed it: Frank Stallone!” or “And finally, the #1 selling doll this Christmas is Tickle-Me Elmo. And the least popular selling doll? You guessed it: Tickle-Me Frank Stallone.”

Where The Godfather Part II and The Dark Knight failed, Staying Alive succeeds. Its single was a hit, the video has its well-deserved legacy as one of the most ridiculously bad (again, I do mean awesome) music videos, and one man is to thank. You guessed it… Frank Stallone – “Far From Over”!