What you’re about to read is something you couldn’t make up. The following is what happened on the Black Lis recent trip to India.

Ahead of the upcoming release of their brand new studio effort, 200 Million Thousand, and a slew of European and U.S. tour dates, The Black Lips made a quick stop to the second most populated country in a world for what was intended to be seven-night trek coinciding with something called Campus Rock Idols.

However, as we first learned on Friday, courtesy of Pitchfork, the first few dates didn’t go as well as planned. Perhaps unaware of the Atlanta natives’ rather one-of-a-kind onstage antics, attendees of the performances chose to voice their dissatisfaction at the performance in the only they apparently know how: by pelting bottles at those dishing out the lunacy on stage:

The idea of four white guys from the U.S. playing punk rock was startling. At first there was a little nervous cheering. Then came the shower of plastic bottles. The lack of boos and negative sentiment seemed to suggest that the audience were simply channeling their energy into propelling these plastic missiles.

Now at this point, most bands would probably give up, count their losses, and head back to familiar territory. But not The Black Lips, at least not immediately.

The very same days that news broke of the band’s plight, Cole Alexander and Co. had a scheduled gig at Chennai’s Sir Mutha Venkatasubba Rao Concert Hall. This time however, when the bottles started flying, Alexander responded by taking off his clothes and jumping into the crowd. With he crowd stunned, “Alexander then proceeded to get back on stage and make out with the other band members,” reports Indian music blog, Indecision.com. 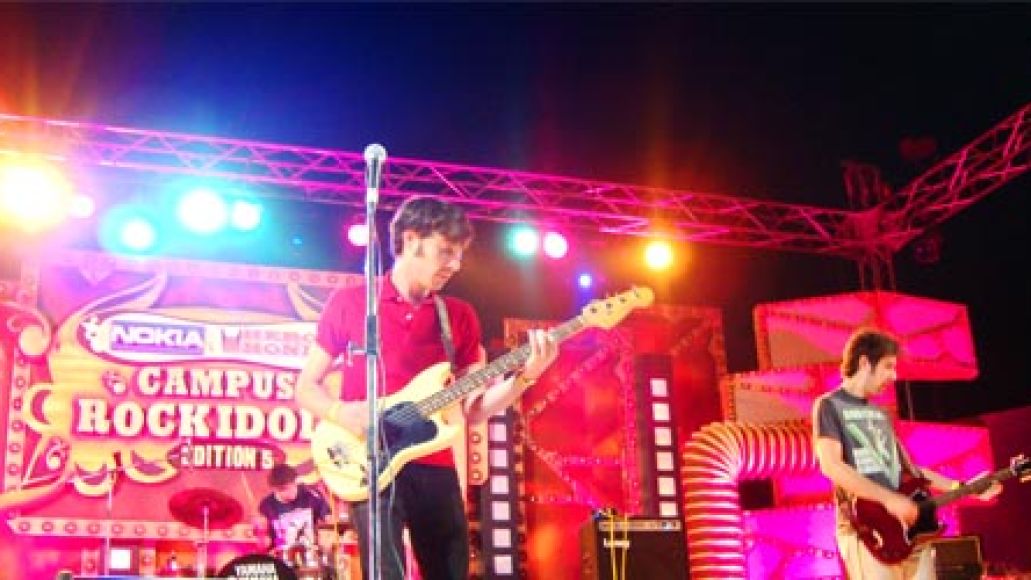 This behavior reportedly infuriated the tour’s promoter, who immediately canceled the rest of the remaining dates and called police to have the band arrested. What occurred next can only be told by the Lips themselves:

They tried to get security to restrain us until the Tamil police arrived. We locked the door while they were kicking and banging on it. Meanwhile, we slipped out the other emergency exit.

When we got to the hotel our tour guide informed us that the that the Campus Rock Idols sponsors were pressing charges and that the police would make their arrest. At that point our tour driver informed us we would have to drive six hours to get to the next town and cross state lines where we would be out of the Tamil authorities jurisdiction, because apparently the jail in Chennai is no joke. Word on the street said that it was teeming with tuberculosis, violence and live maggots so instead of risking going there we fled the scene. The drive ended up taking 10 hours because of a horrific accident on the road. We were also informed that all of the shows on our tour had been canceled effectively fucking all funds for the trip. This was a cultural clashing shit storm.

Eventually, after a few more made-for-television incidents, like the Indian booking agency trying to run off with their passports and a near all-out brawl, The Black Lips finally made it back to Germany in one piece.

Needless to say, the rest of the band’s upcoming dates probably won’t be anywhere close to this exciting. Then again, considering the antics that got them in trouble in the first place, you never know.

The Black Lips strip, make out, and flee India