Nevermind all of those Pavement reunion rumors, because the real deal is here. That’s right, every undergrad’s favorite punksters are talking more about that reunion former bassist Mark Hoppus first hinted at last November, and it’s lookin’ good…well as good as a Blink 182 reunion could be. After former Blink drummer Travis Barker survived a treacherous plane crash, the trio began conversing again and now seem to be on relatively good terms. Via an “MTV Exclusive” Mark Hoppus divulged the details of exactly “what’s going on.”

In his fairly lengthy responses to various questions posed by MTV, Hoppus mainly stressed that all three of the former bandmates are first and foremost trying to reconnect as friends again. He feels that this is the first step before any official statements about a reunion can be made, however things do seem to be looking up: 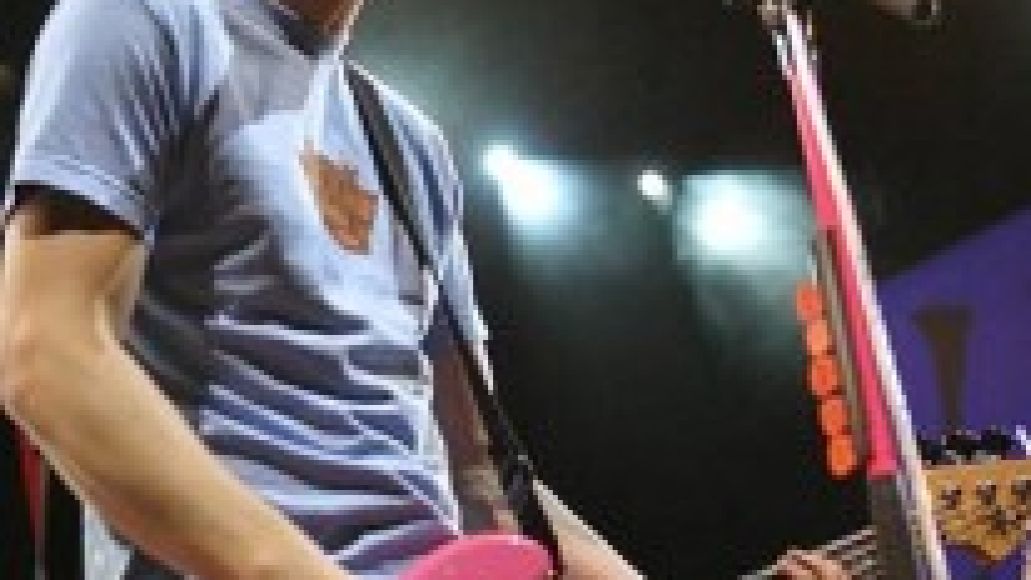 “The simple answer is, we’re still reconnecting as friends right now. None of us know exactly what’s going to happen. I do know that we’re all very stoked to be talking again, laughing and letting the past remain in the past. But we’re also coming together after an extremely acrimonious band breakup, a lot of anger and frustration with one another and four years of not talking. I think that we need to get back to a certain point as friends before we could ever take a stage together again, because that’s what we always based everything on.”

This tells us two things. Firstly, Blink 182’s breakup was particularly harsh.  Maybe I’m just ignorant to all things Blink, but I never would have guessed that Tom left the group out of sheer anger. Secondly, the band was more about friends making music than anything else. So like Hoppus says, these guys first need to become the best o’ pals again before anything else gets settled.

Hoppus went on to say that he and Tom are talking to each other quite a bit, sometimes multiple times a day, and that their conversations include “fart jokes” and “Vampire Weekend.” When directly asked about the future of Blink, he responded the way any former bandmate on the brink of a rumored reunion would: “The future is wide open.” Real original, Mark, have you and Scott Kannberg been having pillow talk recently?

After continuing with all that talk about becoming better friends before anything else, Mark left us with one final comment:

“My final thought is this: If — and this is a big if — Blink-182 were ever to re-form, it would have to be the most amazing, ridiculous, mind-blowing show and tour ever. I feel like, as bitter as our breakup was, we stepped back at the top of our game, and we’d have to come back even stronger and better than before.”

Good luck. You’ve got a whole mess of groups to out-do, but I think if anything does happen, a lot of people will “take off their pants and jacket.”

MTV urges us to “Check out MTVNews.com on Wednesday for more.”