Few live acts today can really match the intensity and stage presence of New York’s Les Savy Fav. When the band plays a show, they bring not only music but also a stage show and more excitement than necessary. This is expected; however, this scant description hardly begins to paint the scene at Epiphany Episcopal on Chicago’s Near West Side. If you were in attendance, you might have had your face licked by lead singer Tim Harrington or at least witnessed someone have their face licked.

The opening band started off the night solidly, Chicago based Jai Alai Savant brought white suits and indie-rock and mixed it all together with a dub sound resulting in a good mix. The lead singer tried to banter with the crowd, but with people arriving late and low audio quality, the stage chatter was only mildly entertaining. Much of the crowd was itching to see what kind of stage show Les Savy Fav would bring later in the evening. Overall, the Chicago natives were a real solid opener and definitely sold some merchandise in the process, this writer included. 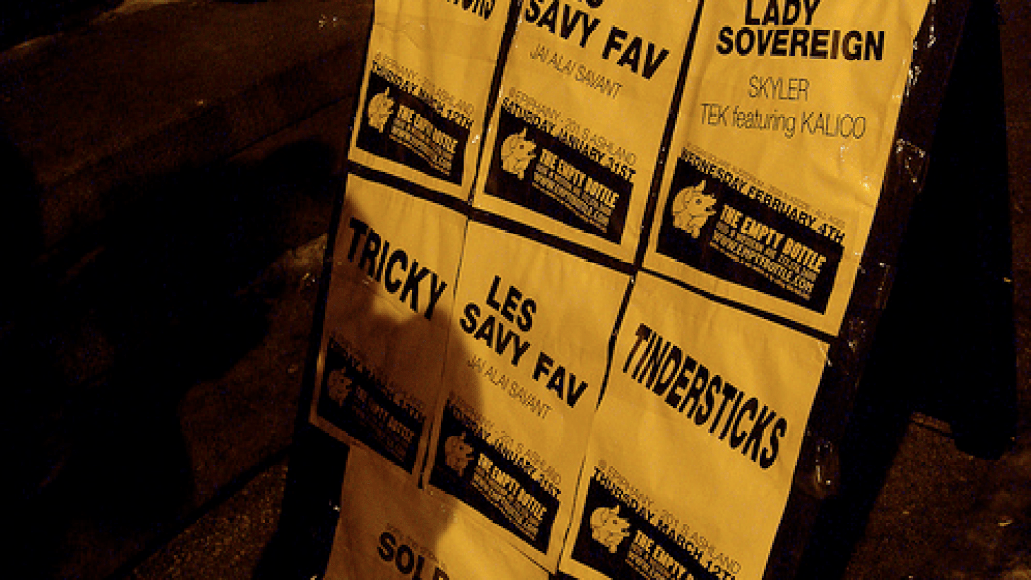 If the aforementioned face licking isn’t your scene, how about outfit changes? Harrington spent part of the show in a wig, a Native American costume, half naked, or my personal favorite, pants made into diapers. Although it might seem wrong, when a band brings this much energy and emotion into a cold wintry February, it warms up the heart.

As the show progressed, the band played a varied selection of their catalog, but when a band has been around for over ten years that’s expected. “Patty Lee” off of 2007’s Let’s Stay Friends was one of the earliest moments of excitement for the crowd. “What Wolves Would Do?” was another highlight off that stacked album. As the night kept moving along, Harrington continually entered the crowd to get up to no good. Did I mention that this entire show was at a church? Epiphany is an open-minded community church that has become a venue for wayward indie bands. In other words, a spiritual haven for all artistic exhibitions. 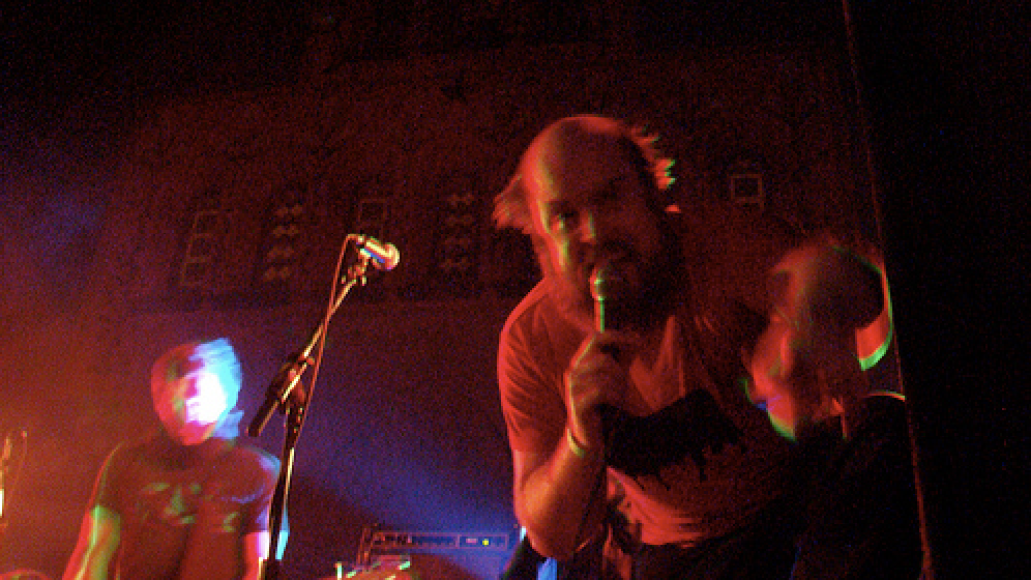 One near spiritual moment involved Harrington in the crowd as normal, but he ascended onto some stored furniture and sang while he was perched in front of a 30-foot high stained glass window. The crowd, of course, used their cell phones’ cameras as impromptu vigil lights. The show did not end there as Harrington again jumped onto some equipment, this time near the stage, and took apart a lighting rig so that he can run around with five mounted lights in his arms. God Bless Les Savy Fav.

There was no break for the rest of the band, as in most shows with charismatic lead singers; instead, they needed to find a way to keep the show going. As Harrington danced and sang his way through droves of churchgoers, the crowd held up his mic cords as the band kept the tunes going until he returned or started a new song. Some might call this a workout, or just honest fanaticism. 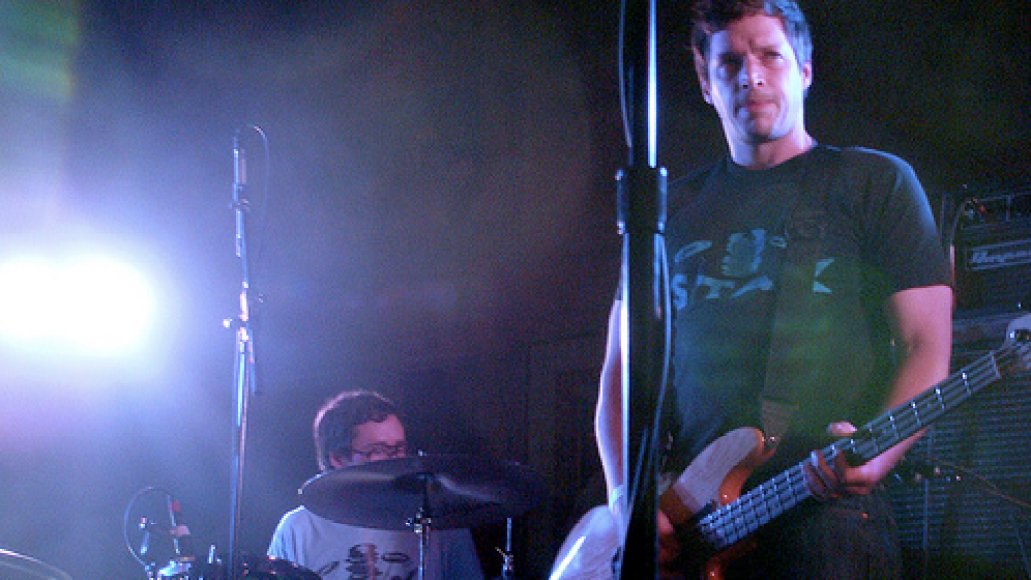 That’s not surprising. Les Savy Fav has long been a band that has had a near fanatical following. They helped build up South by Southwest and seemingly can play that whenever they want. They have never been mainstream by any account, but yet can sell out shows across the country. They always bring a solid stage show and Saturday was not different. The crowd was blessed both literally by Harrington at the beginning of the show and figuratively by the band during the entire show. While not working with the best acoustics, due to the limitations of the venue, Les Savy Fav put on a great show and if you left disappointed, then you’re really weren’t in the spirit.

Special thanks to photo support by the always brilliant Art Pena. 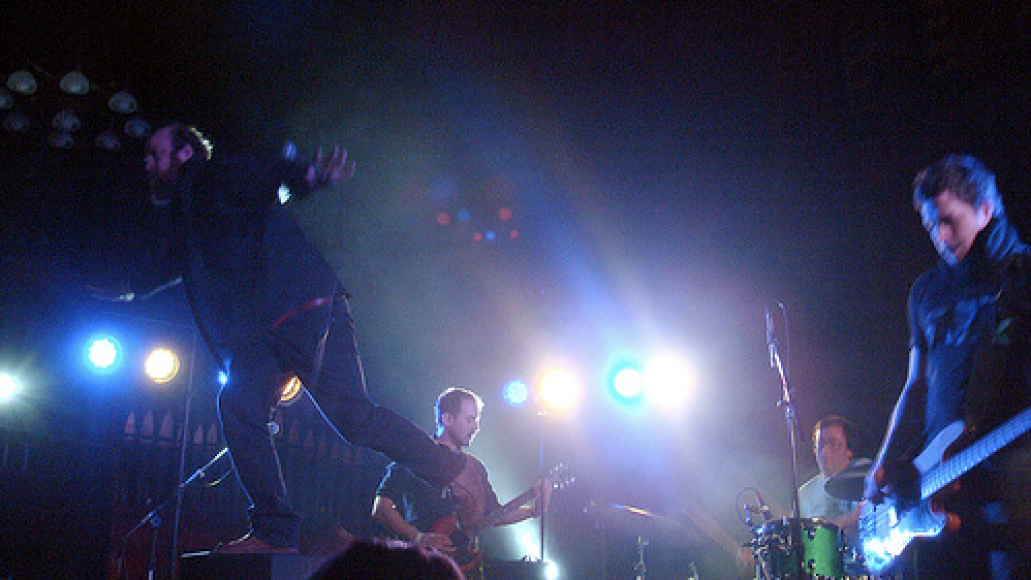 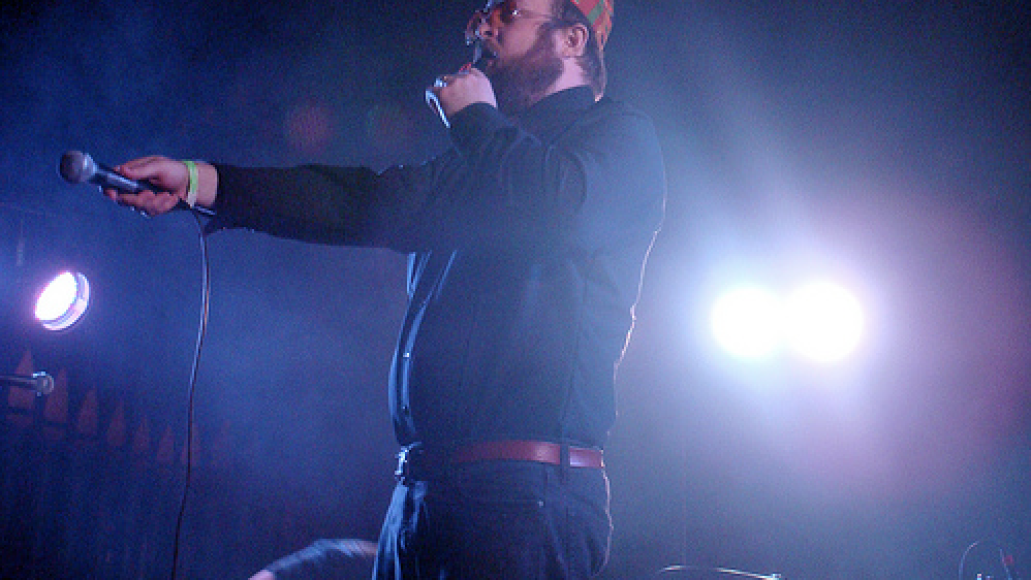