If you are one of those who after hearing First Aid Kit‘s brilliant cover of Fleet Foxes’ “Tiger Mountain Peasant Song” and yearned to discover more, the following lines are the ones that will greet you as you dig into the Swedish duo’s first release: Drunken Trees.

“There’s a city on the top of the mountains. I used to go there as a child. And there’s a forgotten forest there, full of those. They look like they’re falling apart, you know. Just like the people there, those fools. Oh no, don’t get me wrong! It’s a wonderful place! I’m actually headed towards the mountains right now. My train should arrive any minute now. You can follow me if you want, I mean if you have time.”

The Knife’s Rabid Records roster was extended in 2008 with yet another sibling duo. Karin and Olof Dreijer 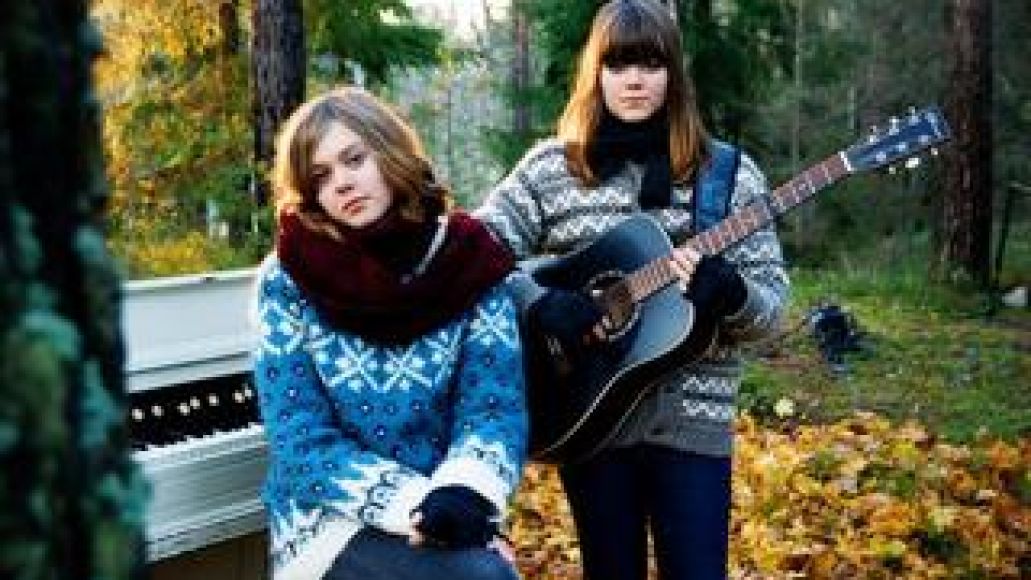 were no longer the only siblings on the Swedish label when the youthful Klara and Johanna SÃ¶derberg were included in the small Rabid family. Although the SÃ¶derbergs might wish that their fully normal Swedish upbringing in the late 90s hadn’t been dominated by   radio sweethearts like Spears and Aguilera, they quickly found their way into the sincerity of indie and the solace of the folky touch.

As you might’ve guessed from the spoken-word lyrics above, the SÃ¶derberg sisters, who have been writing music since 2007, have a knack for the  naively imaginative unconventional. Their charming folkpop sounds like a combination of two of their sources of inspiration: Bright Eyes and Joanna Newsom. Imagine if you add the songwriting qualities of column A and the dreamy, quirky vocal output of column B, you’ve got fancy cookin’. Rabid Records heard this too and released First Aid Kit’s debut seven track mini-album Drunken Trees April 2008.

The duo may have a colorful, self-made cover art for their album and their wee ages (17 and 15 respectively) may speak against them, but the lyrics tell a whole other story. Vivid and expressive, the small texts suggest maturity and an underlying darkness. Their themes of longing, dejection and feministic natures are fully compatible with the works of The Knife. I’m afraid the precocious teenagers have yet to find their own lyrical style of expression, as they sometimes become too anonymous on an otherwise peculiarly personal record.

However, in the end, Drunken Trees comes across as an accomplished debut and First Aid Kit’s yet to be named debut full-length, set for a September release, will be a significant addition to my list of releases to look forward to this year.