There are things that come standard when you attend Slipknot concerts, and this is no exception. With Roadrunner Records label mates Coheed & Cambria and Trivium in tow, the latest incarnation of the All Hope Is Gone tour has again set itself apart as the hottest traveling metal show around. During this particular tour, our all too familiar nine piece headliner stormed the fair college city of Greensboro, North Carolina and so began a nearly sold out rage session complete with caffeinated moshes where not an ounce of ADD was wasted amongst headbanging brethren. Getting ahead too quickly though, we now begin at the beginning with opener Trivium.

Like any other true thrash band, live performances are Trivium‘s bread and butter (check out Metallica’s Live Shit: Binge & Purge). Armed to the hilt, I set out to Greensboro prepped for mental annihilation of the best quality.

If anyone else remembers noting a change in vocal styling between Ascendancy and The Crusade, then you know there was controversy surrounding possible mimicry of Metallica’s sound by introducing less scream and more song. From the perspective of someone fresh into Trivium, watching them live as they tread from Shogun‘s debut single “Down From The Sky” to “Like Light To The Flies” gives off a Metallica feel but not necessarily in a bad way. Let us face facts that regardless of whether Matt Heafy’s voice screams or sings, he entertains the crowds alongside his band mates (the bread and butter element) with real stage presence.

Trivium’s Greensboro set was diverse, while also pushing the 2008 studio effort Shogun with epic “Down From The Sky” delivery and stage decorations showing off real creativity. The song structure to a piece like “Pull Harder On The Strings Of Your Martyr” from Ascendancy is phenomenally elaborate and show off the early work of this Floridian metal militia, making it their personal highlight during the show. The major observation I gathered whilst watching Trivium and the audience is that it should not matter whether you sing or scream, so long as you can make a kick ass show work. Trivium has been through hell and high water to continue making records, and assuming they do this well into coming years I have not a single complaint.

GOD WILL NOT SAVE YOU

The banners behind this New York band’s stage proudly announced things fans wished to come, namely the true submission of eyes and ears before Coheed & Cambria. Due to their fan base, which after the single “A Favor House Atlantic” has been driven into the realm of trendy, I tended to steer clear past Second Stage. After seeing them live for the first time however, that impression has changed dramatically.

Hot off the heels of the Neverender tour and opening on “Welcome Home” ever so epic-ly, Claudio Sanchez makes one hell of an appearance through his signature hair style and skilled guitar. This talent segues into each tune, comprised mostly of material from the latest in Coheed & Cambria’s storytelling album series, Good Apollo, I’m Burning Star IV, Vol. 2: No World For Tomorrow. As any devoted fan would know, the story itself is extremely complex, but the best part about both this band’s albums and concerts from what I have seen and heard comes from accessibility.

Every song can be thoroughly enjoyed by anyone, be them veteran listeners or complete virgins. I fell victim to misjudging Coheed & Cambria before really trying them on for size beyond one album, and I deeply regret it now. Musical highlights of this unfortunately short set had to be “No World For Tomorrow” and “The Velourium Camper III: Al The Killer”. Two downsides included the lack of any Second Stage Turbine Blade material (before this band became the current phenomenon they are) and the set time. Seeing as how Coheed & Cambria will be making a statement at Bonnaroo in June though, these downsides seem relatively trivial.  I have been reintroduced and am now excited for more come ‘Roo in Tennessee, assuming we get a little “Time Consumer”.

Slipknot has not been to North Carolina in quite some time, leaving the angry teens and college students of our rural state rather antsy. February leaves a cold chill most here are not accustomed to, and standing in a line that wraps around various parking lots and causeways is only made more aggravating by those hunting out ticket scalpers like it is deer season. All is forgiven as we made our way in past irritatingly clueless Will Call attendees and friendly metal detectors (try a line with hundreds of Tripp jeans pairs covered in chains) to catch the acts before Slipknot entered. 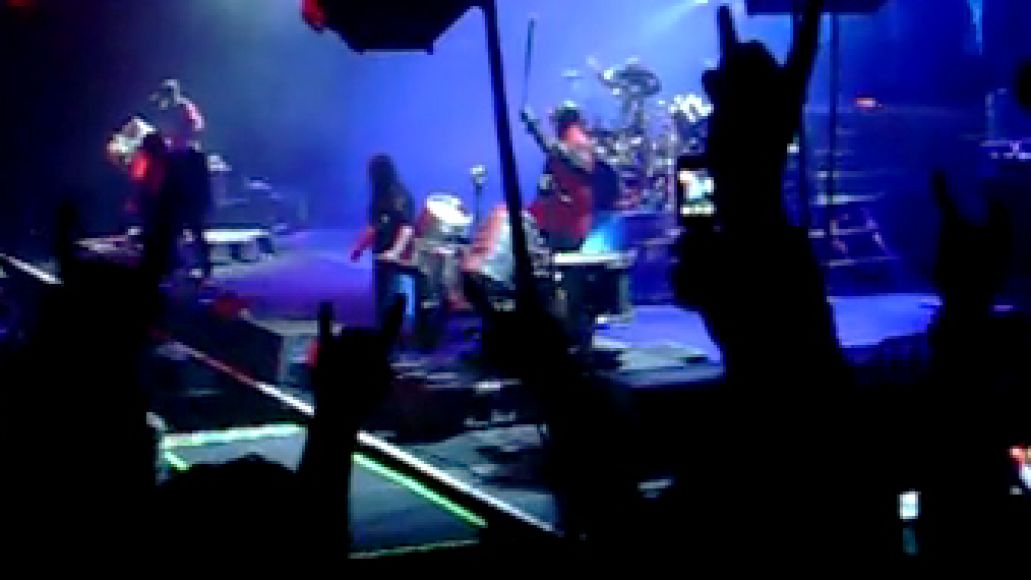 Familiar enough from Mayhem Festival in 2008, a theater curtain veils the set change and a crowd of anxious fans tolerate some satellite radio on the speakers before the whole room goes dark and places an ominous mood over everyone. Starting with “(sic)”, Slipknot brings pain and pleasure with pounding percussion and destructive guitar. Shawn Crahan’s antics and Joey Jordison’s drums make a costumed attire mostly icing on an exploding cake.

Being the gushing Slipknot fan boy I am, it should be noted that my all-time favorite Slipknot tune “Eyeless” was second on the set list (a song sadly absent last go ’round). Screaming lyrics alongside maggot siblings is a rush of adrenaline, shouting “you can’t see California without Marlon Brando’s eyes!” via this song’s chorus. Front man Corey Taylor called out intermittently between songs, pushing an already ravenous audience to breaking points aplenty. Expected inclusions were the latest singles “Dead Memories” and “Psychosocial”, while we were also greeted with classic fare like “Purity”, “People=Shit” and my other favorite “Spit It Out”.  While the primary reason for touring was in support of 2008’s All Hope Is Gone, the 17-song set list had only 2 tracks from this album present, and only 2 from 2004’s Vol. 3: The Subliminal Verses.

Slipknot’s performance was for the fans, not for the record sales. One can honestly say Slipknot has been the ever loyal band to its followers, and this tour is no exception, even with their 10 year existence (despite All Hope Is Gone being their weakest effort). Trivium is a thrash metal band for anyone who wants to bang their head, Coheed & Cambria could be easily placed in my stoner collection and Slipknot gives us a four album soundtrack to madness and mayhem. If you have not bought a ticket to catch these acts live, get one and bring a friend along to mosh with while you are young enough to take the bruises.

Slipknot Setlist:
IOWA
742617000027
(sic)
Eyeless
Wait and Bleed
Get This
Before I Forget
The Blister Exists
Dead Memories
Left Behind
Disasterpiece
Frail Limb Nursery
Purity
Everything Ends
Psychosocial
Duality
People = Shit
Encore:
Surfacing
Spit It Out
‘Til We Die

Slipknot, Coheed, and Trivium take the hope out of Greensboro, NC (2/9)