“Coachella exists in two time zones: the event itself and its digital afterlife,” wrote Ben Ratliff in his coverage of the festival for The New York Times. “The second zone, on cameras and blogs and Twitter and video-sharing sites, comes a heartbeat after the first, like a rockabilly slap-back echo. We agree with this assessment, and our Twitter followers probably do too, so rather than try to thrust ourselves into the “second zone,” we figured we’d dedicate our coverage to a “third zone,” the one in which memories reign supreme…

For many years past, I’ve watched, come January and February, my friends start their preparatory Coachella season with a ridiculous grin slapped across their faces. I breathe a sigh of relief come late March when they decide once again to screw all hopes of implementing an organized plan and, instead, just come to the conclusion that they’ll try to catch as many bands as possible and just, “feel the music.”

For far too long, I’ve never “felt” the music. I just couldn’t comprehend it. “You don’t FEEL music, you LISTEN to music.”

“It’s time to feel the music,” I thought to myself, deciding to take the leap. “How hard could it be?” Scared out of my mind, I typed away my credit card information on the Ticketmaster website, where I eventually settled on only one day: Friday. “Paul McCartney, should be good.” Turns out later, I would get a lot of shit for only mentioning Paul McCartney as the guy that, “should be good” — whatever that means. 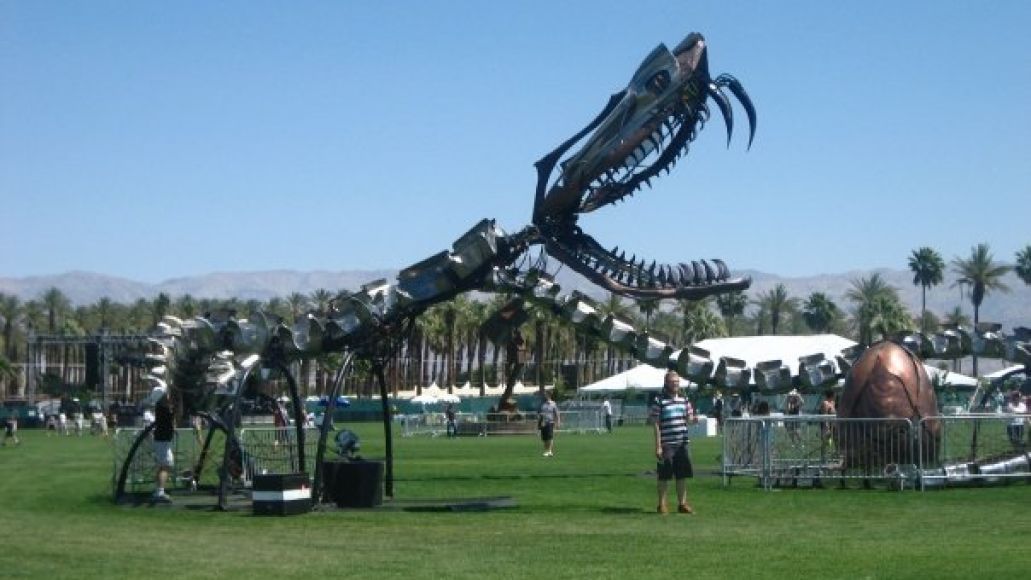 Not that I was really going to see them anyways; I prepared my friends for the fact that I would only be coming for a single day. After dodging band names from Saturday and Sundays lineups like machine gun fire, everyone calmed down just a bit and decided the next best thing to do was sit me down, with a map in hand, and get me acclimated to the rules of the road. This, in all honestly, proved to be more difficult than it lets on. After going through various art installations and where to buy drugs under which fire breathing mechanical snake head, I decided to give up and just experience it all fresh and new, you know, from my own point of view. So…here goes nothing:

Things started around 9:30 Friday morning. After having hit my buddy up for a pair of his “Coachella-esque” sunglasses, I was on my way, packed to the brim with…ummmm, nothing. Well, not nothing. I did bring a back pack with a shirt, just in case it got cold. Oh, and a small overnight bag for the hotel. This seemed to be enough. I mean, how prepared could one honestly be for a day on a polo field, where they’d be watching a few bands play?

By the time we reached the highway exit towards Coachella, I was ridiculously hungry, desperately looking for a place to pull off and grab some grub. I happened into the line of cars leading directly toward the parking lots for the festival…shit. Not to worry though, my hunger was abolished by a Coachella carpooler two cars ahead, who abruptly took to puking nuclear pink chunks out the car window. Not just once, or twice, but for a fluid half mile, all the way until we entered the parking lot and lost sight of the car altogether. Hunger issue solved! 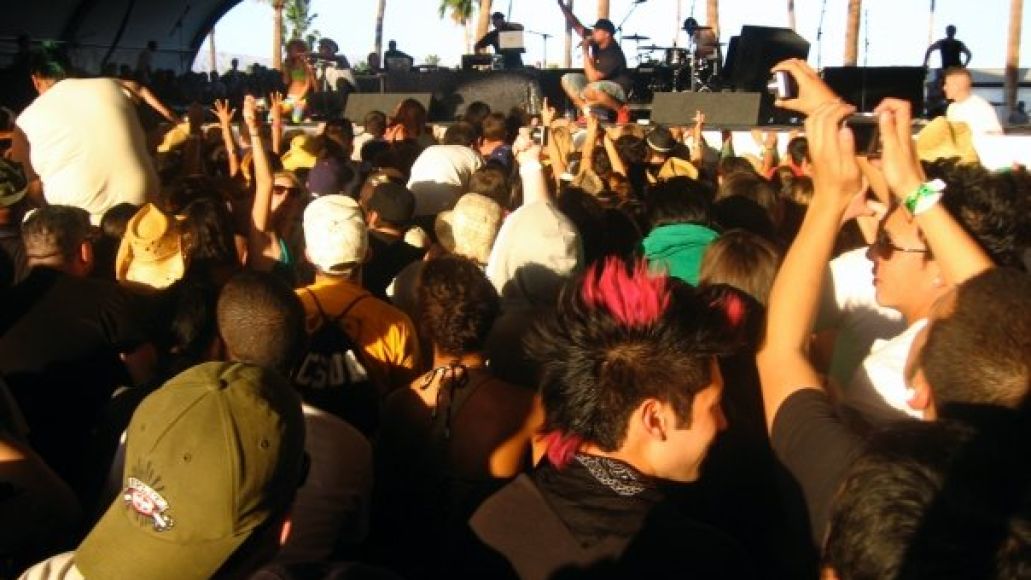 As we parked the car and opened the doors, the heat hit me like a freight train. Bloody hell was it hot. Why did I wear jeans? And later the general sentiment would be, “Why did I decide to wear a back pack the whole day?”

As we followed the mess of people towards what appeared to be the festival, I suddenly realized I was not in fact a camel, and did actually need to hydrate. Unfortunately, we were stuck in the wrong line, waiting to get into the campground instead of the festival. One hour, absolutely wasted!

At first, I thought the very unhappy overweight security guard was joking around when he asked me to empty every pocket and open every zipper on my backpack, but with a quick look, he clearly expressed otherwise. He sniffed my bag for drugs as I insisted, “Don’t worry I’m not trying to smuggle any drugs in” That seemed to go over well with the crowd, who laughed riotiously. “No seriously, I don’t have any drugs.” Harder laughter followed. Comedy for everyone, apparently.

Not really knowing anything about the festival, we stumbled upon Noah and the Whale first. They seemed to be the only thing really going on at 2:30 in the afternoon on Friday, or at least they had the most vocal following.

This British group absolutely astonished me. They seemed a bit young in their sound, not as crisp as the older guys like Leonard Cohen, but the way the violin was incorporated into the songs was fantastic. Despite the fact that the lead singer had completely lost his voice, these guys really pulled together a great set with fantastic melodies.

From there, it was time to cool down some, which seemed to be the popular thing to do all day. Many women braved the day in scantily clad clothing, an idea that proved brilliant in the day, though later on…not so much. Those same brave souls really didn’t know how to handle the cooler temperatures later on in the evening, as they shivered in their bikinis while watching a very playful Paul McCartney jam past midnight.

After stopping by the DOLAB (a fun water themed art/dance performance installation) for some desperately needed misting, we decided to catch the second half of People Under the Stairs.

Cramming my way into a mostly packed GOBI tent, knowing absolutely nothing about this group, I was 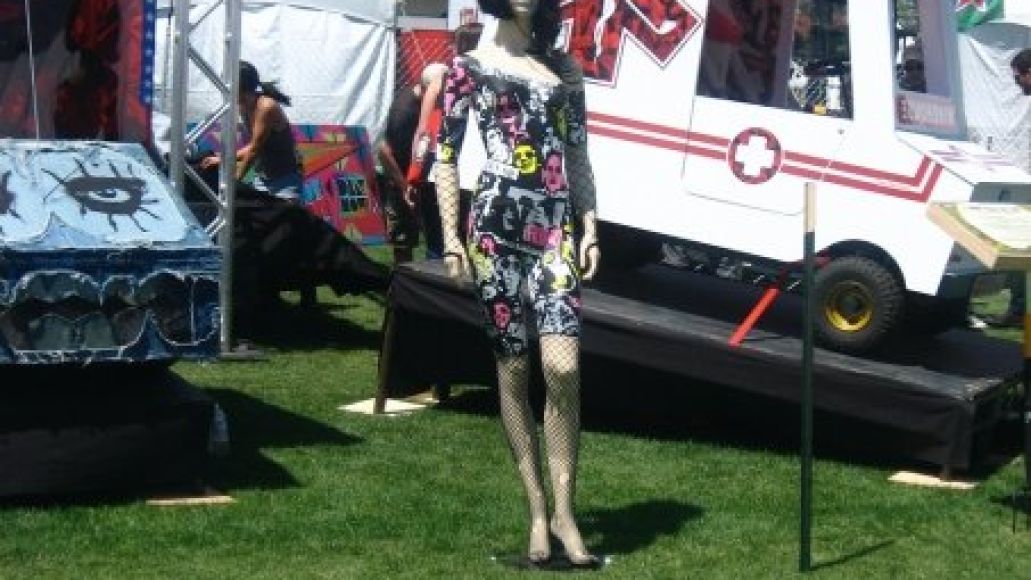 pleasantly surprised by the vigor and beats they threw out. The crowd seemed “die hard” about the music, which only added to my experience. They definitely made a fan here!

Shortly following a quick bite of ridiculously over priced pizza (I hadn’t found the good food yet, only the shitty stuff on the far side of the festival), I made my way to the main stage for the remainder of The Airborne Toxic Event. Almost exhausted at this point, it seemed a perfect opportunity to lie at the outskirts of the stage and take in a great set of music.

It was only after that I became almost morbidly fascinated with three speedo-clad gentleman being stopped by all walks of life for various picture opportunities. A million questions buzzed my head: Gay? Straight? Is this a joke? Were they hired? Why do I care?

It didn’t matter, I was on my way to the Sahara tent for an experience of a lifetime, Crystal Castles. Now, I had no idea what I was in for as I met up with a couple friends who pushed our way to the center of the madness. As we passed one guy heading the other way I could hear him muttering, “Wow, it’s never been like this before.” His foreboding warning proved right. People were packed like sardines into what was the biggest tent of the festival. It was simply amazing to throb to a beat that relentlessly demanded all of your energy. I didn’t necessarily enjoy the music, but…did I have a choice? I had to remind myself I wasn’t on drugs. No really, I wasn’t.

Still drenched in sweat from my first real rave experience, I stumbled upon a still hip Leonard Cohen, who couldn’t have played a better set. He put the young guys to shame with his crisp instrumentals and absolutely amazing vocals. My all time favorite moment of the day was when he performed the all-time classic, “Halleluiah”. If for nothing else, I felt it an honor to hear this legend sing the equally legendary song.

Girl Talk came next. Clearly a party more than a concert, this guy did the same thing he always does.  Take off his clothes? Check. Play around with his seran wrapped laptop? Check. Invite people to let their freak flag fly? Check. Naturally, it worked. The party was absolutely bumpin.’ Unfortunately, Paul McCartney was right up against his set, which meant a lot of people, me included, ended up splitting the scene twenty minutes in, all in hopes to try and grab a good spot for the main act.

After a thirty minute delay of some sort (did we actually expect him to be punctual?), Macca took the stage to a somber applause. Was it somber? I honestly couldn’t tell. I think there was a time delay between the stage and the back of the house far beyond the horizon. McCartney made reference to this as his first few seconds on stage included a look of “awe” over the crowd.

The camaraderie was clear as Beatles melodies mixed with recent McCartney material. Young and old rockers, punkers, rappers, children all seemed to hold their breath. Although I don’t think he quite knew how to pronounce Coachella, he won the audience over with his candid memory of Linda (Friday was the anniversary of her death, eleven years ago) and his suave, joking demeanor throughout. Responding more favorably to the Beatles tunes he played, I couldn’t believe I was in the presence of a true legend. And as the crowd sang along to “Hey Jude”, I smiled to myself, forcing my mind not to reminisce quite yet. I just let myself be in the moment. 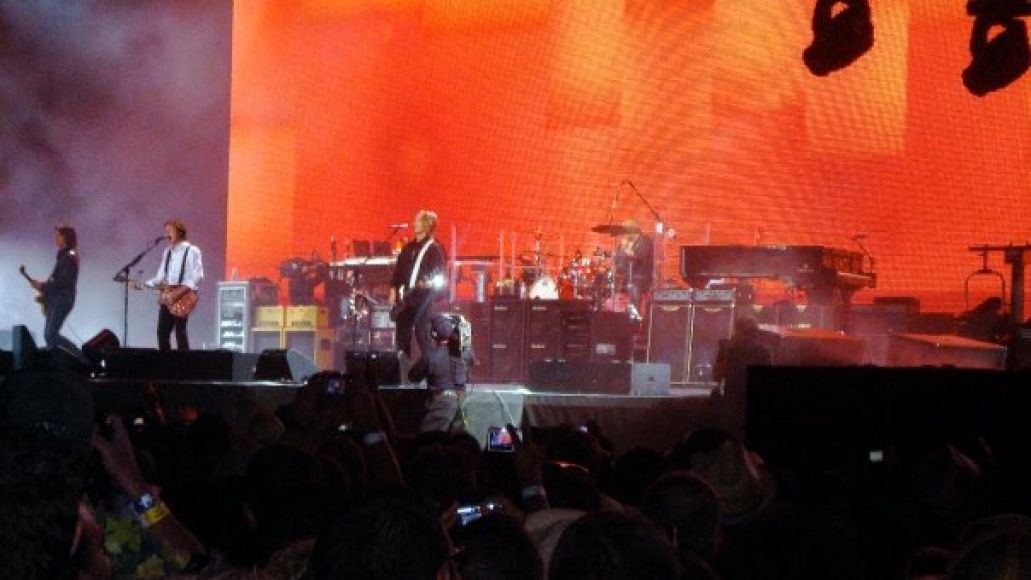 As we pulled out of the parking lot, in relatively quick timing given the high volume of drunken drivers all headed toward the same two-lane road, I began to miss it all already. Never before have I experienced such an electric energy, and such an accepting vibe amongst peers. Despite the ever-changing line-ups, this festival always brings people together for one weekend in the middle of the desert to celebrate music. Influenced less by present day society and pop culture than it lets on, Coachella is a place to be free, and be yourself without ridicule. It’s a place where individuality thrives and music is not just heard, it’s felt.

As we hit the main roads, heading towards the hotel, it hit me, “I think next year I’ll have to plan better and catch more stuff…Naw, better just play it by ear and see where the music take me…”