An opulent venue can affect a rock concert in one of several ways. I’ve seen great acts become stale performers as they move from tiny clubs to orchestra halls. Other acts make the same transition but grow as performers as a result. Friday night at the Chicago Theatre, Neko Case made the move from club act to theater headliner with few hiccups.

Denver-based Crooked Fingers opened the show with a set that showcased the band’s penchant for rock tunes tinged with a bit of country. Frontman Erich Bachmann steered the band through 45 minutes of tunes with very little chatter. Although the Fingers’ genre-bending sound was appropriate for Case’s audience, the songs didn’t stand out as special or noteworthy in a live setting. The band’s studio work proves Bachmann can write a stellar song, but you need to sit with the songs to hear the well-crafted lyrics and effective arrangements. In the Chicago Theatre, they sounded generic, especially since neither Bachmann nor guitarist and vocalist Miranda Brown exuded any emotion to indicate they were invested in the performance. Perhaps in a small club their facial expressions and minute actions would convey more than could be seen beyond the first row Friday night.

After the Crooked Fingers left and the lights came back down, Case brought her six-piece band to perform her songs with no fluff or filler. Much like her albums, the show was without extravagance, which occasionally felt at odds with the theater’s ornate appearance. The backdrop was an oversized owl cutout that held up a projection screen, which displayed video and shadows throughout the set. Aside from those extras, the lights were static during most songs and the musicians barely moved from behind their microphones. The night was essentially a showcase for the songs and for Case. 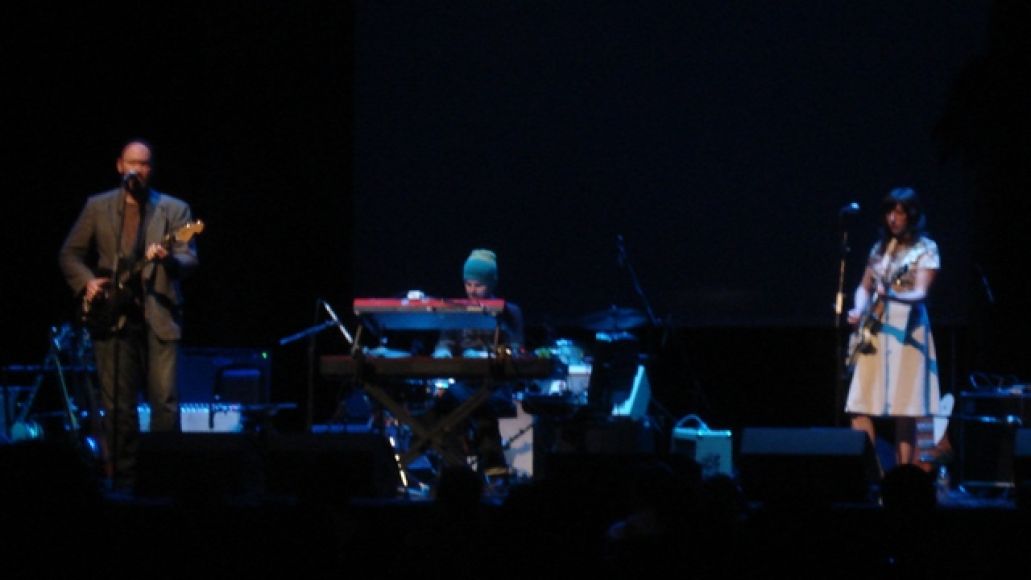 Starting with “Maybe Sparrow”, off of 2006’s Fox Confessor Brings the Flood, Case set the tone for the show. Backed by soft drums and acoustic guitar, Case cried to the audience, “Oh my sparrow, it’s too late / Your body limp beneath my feet / Your dusty eyes cold as clay / You didn’t’ hear my warning”. She then launched into “People Got a Lotta Nerve”, the lead single off of this year’s Middle Cyclone. The animated video for the song showed on the screen behind her and was one of the moments when the visuals accented the song without upstaging it. A cartoon Case ventured out of a killer whale to explore a menagerie and brandish a rifle.

At other times, corny visuals distracted from a song’s poignancy. One of the strongest tracks on Middle Cyclone is “This Tornado Loves You”, a track that draws a parallel between the destruction of a twister and two lovers fighting issues of trust and frustration. Yet, as Case let her emotions flow, a tornado containing a cartoon heart tore through a small town on the screen behind her. The literal translation was unnecessary and pulled focus off of the song and onto the screen.

Fortunately, Case isn’t adverse to sharing the spotlight, especially with her band. Most of the evening’s banter came from her backup singer, Kelly Hogan, who has enough personality to be a standup comedian and the vocal abilities to go solo. A Chicagoan, Hogan joked with the crowd that she had probably served us all PBRs at some point in her career and she name dropped the Hideout to prove her pedigree. The rest of case’s band was more than capable of upstaging Case, especially John Rauhouse on steel guitar. The musicians, however, displayed the ultimate form of talent by working together to support Case. 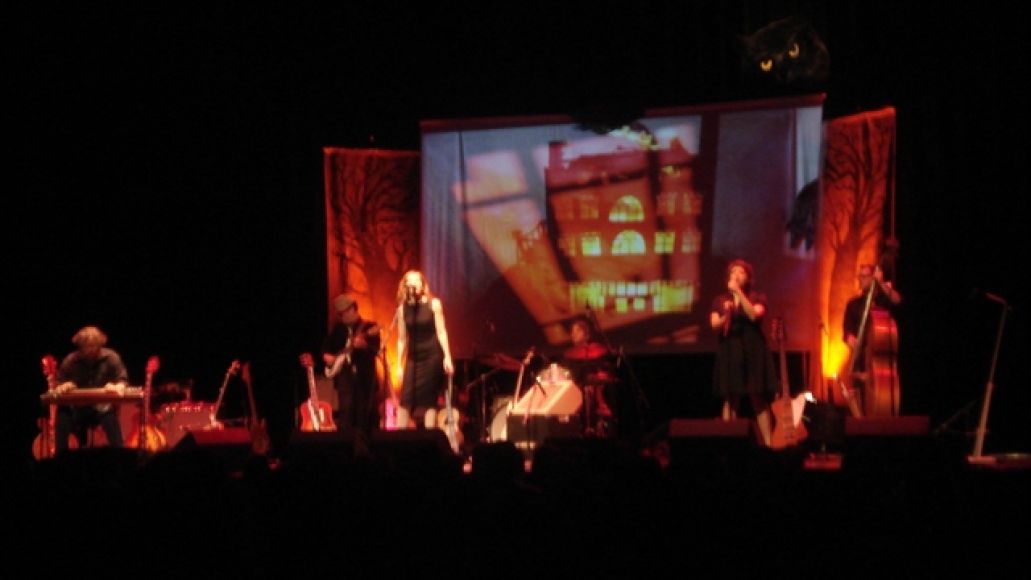 Unfortunately, the enthusiastic crowd wasn’t always as considerate. Between songs, as Case switched guitars and the lights came up, many audience members felt the need to shout requests or exclaim “You’re hot!” Although such behavior can’t be justified for any reason, part of the problem lies in putting an intimate artist in a large venue. Case has a voice regal enough to fill a classic hall, but her presentation was decidedly casual. Plus, the projection screen was so small it appeared better suited for a smaller venue, and most of her tour dates have been at general admission theaters. It felt as if both the audience and band were used to clubs and small settings but found themselves thrust onstage in an upscale joint.

Nevertheless, Case possesses a voice than can come from her gut and stun every listener in any hall, but she rarely uses it in such a showy manner. During the lengthy encore, when she performed her cover of Sparks’ “Never Turn Your Back on Mother Earth”, we finally heard her and Hogan unleash their vocals in a swelling moment where they were as powerful as the crescendo of the drums behind them. In that moment Case made it obvious she could show off, but she’d rather let the songs speak for themselves. Judging by the audience’s stunned applause, I think she made a smart choice.

Neko Case touches down at the Chicago Theatre (4/24)