Let me preface the following questions by first stating that this concert was phenomenal. Okay, now that that’s out of the way.

Was I at a Slayer concert last night? Did I buy tickets to see Animal Collective at the Electric Factory to somehow be implanted into a Slipknot crowd, with Animal Collective existing before my eyes as some sort of desert mirage? I mean, really, for a band as tripped out and sunny as Animal Collective, you would think that this crowd was either responding to something that wasn’t actually going on or had never heard the music that they had obviously gone to great lengths to see in a live setting. This was a sold out show, almost immediately, and anybody there had to be a pretty big fan, right? My aching back would tell you otherwise.

As Dave “Avey Tare” Portner, Noah “Panda Bear” Lennox, and Brian “Geologist” Weitz took the stage at Philly’s Electric Factory this past Monday night, all hell broke loose amidst the notably young crowd. Waves of human beings resulting from unwarranted pushing threw people against barricades, which probably led to some bruised ribs — or, even worse, conception. Before this show, I never felt like I went to second base by accident during a live performance. There’s a fine line between a fun raucous crowd and an annoyingly wild one, and it was crossed at the beginning of Animal Collective’s set. It was a struggle to block out the utterly annoying crowd in an effort to enjoy myself. But, luckily, as the band grew progressively captivating, this became less and less necessary. Sonic explorations never sounded so good. 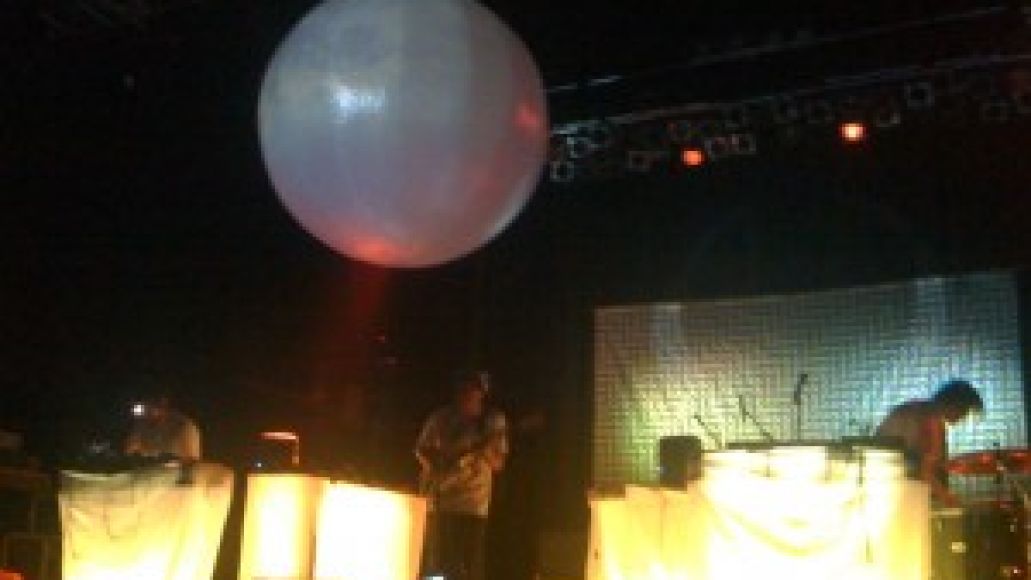 Seeing Animal Collective live is exhilarating in its perplexity.  Songs are often difficult to pick out until some singing begins, as blips, noises, and samples become sort of interchangeable with each selection. You can hear a sound from Strawberry Jam’s “#1”, but actually get a “Daily Routine” and so on. But there’s a great deal of fun in the guessing game, as you dance your way to the answer. Though the songs end up developing into pretty true representations of their recordings, Animal Collective takes a good deal of time to get into the groove. As an audience member, you are literally witnessing the band build each song from a mess of sounds. It’s sort of analogous to watching one of those speed painters, who seems to be throwing random things on his canvas, before you realize that he’s created a stunning poster-ized portrait of Bob Dylan, or a mind blowing galactic spray paint landscape. Granted, the band has sped this process up a great deal since their last tour, but it remains a process-albeit a fascinating one. The guys are essentially the most uncharacteristic jam band to ever exist. They jam in every technical sense, but the music is so far from jam that it’s hard to categorize them as such. Their songs don’t end, but merely fade into one another in a never-ending wave of noise. 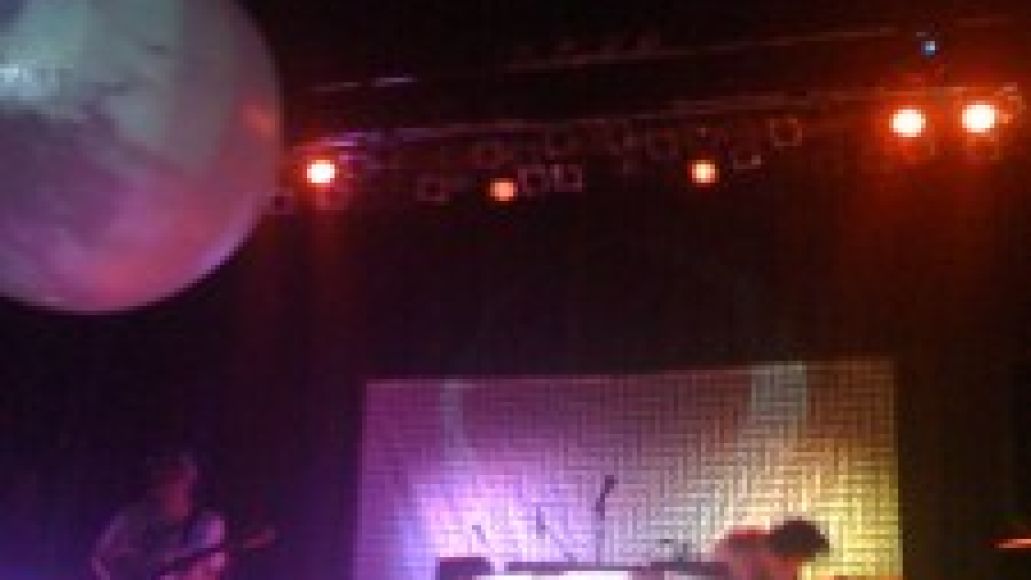 But it wasn’t too difficult to spot the band’s set opener, the very appropriate “In the Flowers”, which opens their latest release. As the boys turned their knobs and pushed their pedals, grunts and zaps filled the warehouse before Avey stepped up to the mic to sing the song’s opening lines. From then on, the set was almost too perfect. Whereas a prior set at DC’s 9:30 Club the night before consisted of older, less recognizable songs in between Merriweather gems, the Philly set went hit after hit. Take their sped up version of Sung Tongs’ “Who Could Win a Rabbit”, which began almost before the conclusion of “In the Flowers”. Then came a stunning version of “My Girls” which got the crowd into an even bigger frenzy, only to grow in magnitude as they lapsed into “Summertime Clothes”. As heads bobbed about like buoys, the guys went back a few albums for a trip through “Leaf House”, which was a shocker for most. Fast forwarding to the present, the guys tested one of their newest tracks, “What Would I Want Sky”, a heavy groove featuring a Grateful Dead sample. At this point, it was difficult to even pay attention to the overbearing crowd with such a stunning band performing. As Geologist’s headlamp swirled about, Avey and Panda harmonized their clever lyrics. Watching Panda Bear and Avey Tare sing, you get the sense that these people truly mean every line. These are personal mantras, which makes sense, given the repetitive song structures. Panda clutches the microphone stand tightly and wails as if his life depended on it. There is definitely a lot of passion on display at an Animal Collective show, and it can be seen throughout a set’s entirety.

But for anybody who has seen Animal Collective before, you know that the show isn’t truly great until Panda Bear picks up the sticks. Sure, electronic drum machines and samples are riveting in the live setting, but Panda Bear’s drumming is all consuming. His perfectly timed syncopated hits turned the energy level even higher than it had been before. As the guys began what sounded immediately like the hard-hitting helicopter swells of “Fireworks” with a “Leblakey Dress” intro, fans were on the edges of their feet. But, once Avey began to hum “Fireworks” catchy melody, Lennox attacked his drum set with fury, sweat dripping from his hunched forehead. The song was definitely the night’s highlight, lasting close to fifteen minutes, with a lengthy mid song jam. But Panda Bear wasn’t done with the drums just yet, and the boys progressed into “Lion in A Coma”, another track featuring Lennox’s signature stick work. Back to back, these tracks nearly stole the show. The band continued with arousing rendition of “Daily Routine” and a raucous “Brother Sport” before signing off. After blowing minds with their take on jam, a reserved thank you from Avey seemed otherworldly.

The boys returned for a three-song encore, featuring another new song “Bleed”, Merriweather’s “Also Frightened”, and Here Comes the Indian’s “Slippi”. It was a strange song selection for an encore, but for Animal Collective, they could have played anything and it would have been excellent. Avey again earnestly thanked the crowd with a wave, and a pretty incomparable live experience ended.

Set List:
In The Flowers
Who Could Win A Rabbit
My Girls
Summertime Clothes
Leaf House
What Would I Want Blue Sky
Fireworks
Lion in a Coma
Daily Routine
Brother Sport
Encore:
Bleed
Also Frightened (no more running outro)
Slippi