At this stage in their careers, it almost seems pointless to review the actual performances of Bruce Springsteen and the E Street Band. We know these guys can play. Like, really play. Despite their age, their music isn’t just a performance, it’s a proclamation, pounded out with more celebratory passion, balls out fury, and carpenter’s craftsmanship than any up and coming indie band today. Even though complaints have surfaced form the media during their current Working On A Dream tour that some of the members are starting to look their age, it is just that; looks. Yes, longstanding pianist Roy Bittan looks his 59 years, but he still tickles the ivories with so much diverse precision that they laugh themselves to death, enveloping Springsteen’s songs with twinkling rainfall magic and abrasive roadhouse stomp, allowing the audience to see why he earned his nickname “The Professor” so many years ago. The Big Man Clarence Clemmons looks his 67 years, even remaining somewhat stationary as he bangs out rudimentary percussion between his solos, but he still roars on the sax, shredding the arena walls with his extended, grimy riffs.

The age factor got thrown for a loop halfway through the show when thunder-armed drummer Max Weinberg stepped down from his set to let his nineteen-year-old son Jay fill in. The younger Weinberg brought a flash of metal to the rusty pan, spicing up some traditional Springsteen songs with the snap of his crisp, diverse Mastodon-inspired beats. As for The Boss himself, he sounds better than ever. Although the gravel of his voice kept him from hitting some of the lower notes on sing/speak tunes like “Candy’s Room”, he still has so much unbridled enthusiasm that it didn’t really matter. And the country honky tonk meets Tom Waits vibe of some of his newer vocal work (particularly on “The Wrestler”) truly was powerful and at times, wonderfully menacing.

So since stellar performances are such a given when it comes to reviewing a Springsteen show, it’s important to look at the audience interaction and the setlist. And as Tuesday night’s sold out performance at the United Center indicated, for the most part The Boss still knows how use his song selection and rock n’ roll preacher bellow to rev up the crowd like any of the classic getaway cars that rip through the gritty landscapes of his songs.

The arena went black as the band took the stage with no warm up notes or introductions, baiting the audience in eager anticipation before launching into the opening piano twinkle of “Badlands”, the consistent opener on the first leg of the tour. The optimistic showstopper set the tone for the evening, which consisted mostly of upbeat, hopeful rockers from nearly every era of Springsteen’s career. Even normally dismal, acoustic haunts like “Johnny 99” and “The Ghost Of Tom Joad” received electrifying full band treatments, the latter showcasing a rapid fire, insanely ethereal solo by lead axe-man Nils Lofgren. The camera positioned on the neck of his guitar broadcast his sporadic noodling on the Jumbo-Tron, proving to the audience that Lofgren is one of the most criminally underrated guitarists of all time (listen to any of his solo work or albums with Grin for further proof). Steven Van Zandt’s string styling was welcomed as well, and although not as technically proficient as Lofgren, his colorful personality and higher-pitched, raspy backing vocals are essential components to any E Street show, particularly on the grim, urban tracks from Darkness On The Edge Of Town. 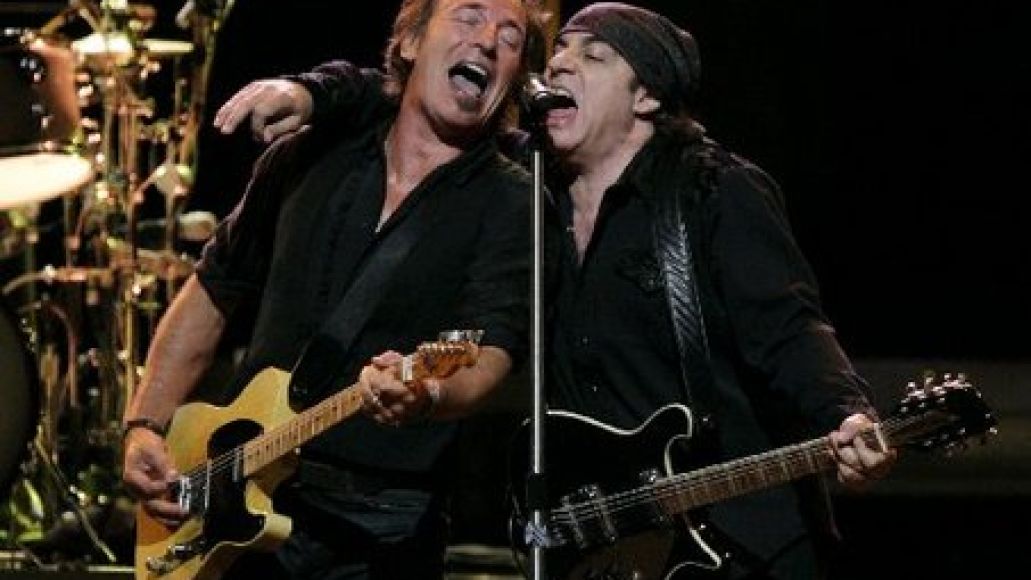 Other classic highlights of the main set included the working class chug of the rarity “Seeds” and the speakeasy, hip swinging swagger of “Spirit In The Night”. Positioned as the second song of the night, it demonstrated that Springsteen is a better, more confident showman than ever with the ability to seem improvised yet polished all at once. After asking the crowd “who wants to go to Greasy Lake?” the band launched into the muddy R&B groove of the song. He loosely moved around both the stage and the audience, alternating between dancing, sitting down, greeting the crowd, and kissing old ladies on the cheek. None of it seemed contrived or ham-fisted either. It looked entirely genuine, a guy who was just happy to be there doing what he loved. And it was pretty touching to see a gaggle of grandmothers swoon over a peck from The Boss.

The evening’s most emotionally exhilarating moments came from choice cuts off of Born To Run and The Rising. Easily Springsteen’s most ambitious albums in scope of both subject matter and musicianship, they translate the best to an arena setting. The band played “Lonesome Day” and “The Rising” back to back. Founded on Soozie Tyrell’s rich, bittersweet violin and the gospel backing vocals of newcomers Cindy Mizelle and Curtis King, both songs were emotionally resonant, relevant, and uplifting without being hokey. Because of Springsteen’s sincerity and flexible poetry in the lyrics (the words 9/11 and World Trade Center never came out of his mouth), the songs still remain the most potent and honest songs to date about September 11th. From Born To Run, the audience was treated to the spastic garage thump of “She’s The One”. The tune always brings down the house, especially with the percussive breakdown at the end. As was the case with “Badlands” and several other tracks of the night, The Boss held the microphone to the crowd, bringing up the lights for them to sing back to him at the song’s climax. But the hands town milestone of the evening was (no surprise here) the title track from the same album. Played as the closer of the first set with the lights up and every single person standing and shouting along to The Boss’ most adrenaline soaked anthem of desperate youth, there is simply nothing like hearing “Born To Run” live. It’s the closest thing to a religious experience I’ve ever had at a concert, and it would take a lot to top it.

However, the evening did have a handful of minor disappointments, one of them being the first half of the encore. Although nothing would have been able to match the high of “Born To Run”, it was still a bit of a downer to hear a cover of Stephen Foster’s folksy Depression tune “Hard Times Come Again No More”, even with the extraordinary gospel singing of Mizelle and Curtis. Having the definitive opus “Jungleland” immediately follow was a smart move. But following that with “American Land” and “The Land Of Hopes And Dreams” was a lot of patriotic idealism to take in one sitting. Don’t get me wrong, the two “American” cuts are good songs, but so similar in terms of subject matter that it would have been nice to feature one instead of both, and maybe fill the other epic time slot with something like “Mary’s Place” or anything from Magic, which was largely ignored save for a mid-set “Radio Nowhere”, which is far from the best song on that album.

But as if the band had sensed the audience’s slight dissatisfaction with where the encore setlist was headed, they launched right into “Dancing In The Dark” after the band introduction. As they took their bows, Springsteen pointed to someone with a sign in the crowd (one of many due to the song request portion of the show), beckoning them to pass it to the stage. As it made its way to the front, The Boss showed it to the rest of the band and they retook their positions for a soaring rendition of “Rosalita (Come Out Tonight)”, their staple closer during the seventies and eighties, and one that received a vibrant, welcome return cheer from the Chicago crowd. t was the best way to end the evening.

There were a few other heavy-handed moments in the night. Springsteen donning a cowboy hat during the darkly humorous “Outlaw Pete” was a bit much, as was his speechifying in the middle of “Working On A Dream” about how it was just as important to “build a house” as it was to “rock the house” through “sexual healing” or some other nonsense. As charismatic as he is, his inspiration comes across much better in his music than in his soapbox skills, as was evident when comparing the lame speech to the much more effective cover of “Raise Your Hand” when The Boss took cover song requests from the crowd (last night’s choice was “Mony, Mony” for those keeping track). And for being The Working On A Dream tour, the set featured very little material from Working On A Dream. And I would have liked to see the corny “Kingdom Of Days” omitted in favor of one of the more edgy tracks like “Good Eye” or “Life Itself”.

But you can’t have everything. And for a career as long and diverse as Springsteen’s, it would be impossible to please every single fan with every aspect of his set. Complaints aside, last night the E Street Band still held their status as one of the most energetic, talented, uplifting, and just plain best bands in the world, showing Chicago that age is only a number, even if that number is 67.

All photos via Scott Strazzante/Chicago Tribune.