Last weekend, recent FSU graduate/CoS contributor Nick Travers took to the Pacific Northwest for what has now become one of summer’s hidden treasures, Sasquatch! Music Festival. Read along as we uncover the bands, the heat, and the madness that happened over the three day, holiday weekend.

Before anything else, I need to let you all know that I am a Florida boy, born and raised (on the playground, where I spent most of my days). Flying to Seattle and the ensuing trip to Sasquatch was an incredible experience for someone who has never seen mountains before, and there are plenty of them. Driving from Seattle to The Gorge is a trip all on its own. One minute you are on the lush side of the Cascade’s, enjoying the millions of trees engulfing the mountainside. The next minute you are Cascaded (as it were) into the desert. The cold, bleak desert. The trip usually takes about two and a half hours, but with all the eager fans chomping at the bits to get to the campsite on Friday night it was closer to four. Sasquatch was about to begin. This is my story.

After arriving to the campsite at one in the morning, my friends and I set up tents in the pitch dark, not even aware of the beauty that we would wake up to. While the camping grounds at Sasquatch had sold out, no one was turned away. The Gorge was prepared to take anyone that wanted to camp, and there sure were a ton of people. If you’re doing your math right, one in the morning Washington time still feels like four in the morning Florida time, so sleep was definitely in the near future.

With little humidity in the desert, it gets rather cold. Wrapping yourself in numerous blankets seems like a great idea before going to bed, however you immediately regret that decision in the morning when the sun comes up and begins to bake you in the tent. Eager to get into the festival I quickly rushed to the Honey Bucket (which might sound like a delicious chicken restaurant but is most definitely a porta potty). This was a necessity as the public restrooms were few and far between. 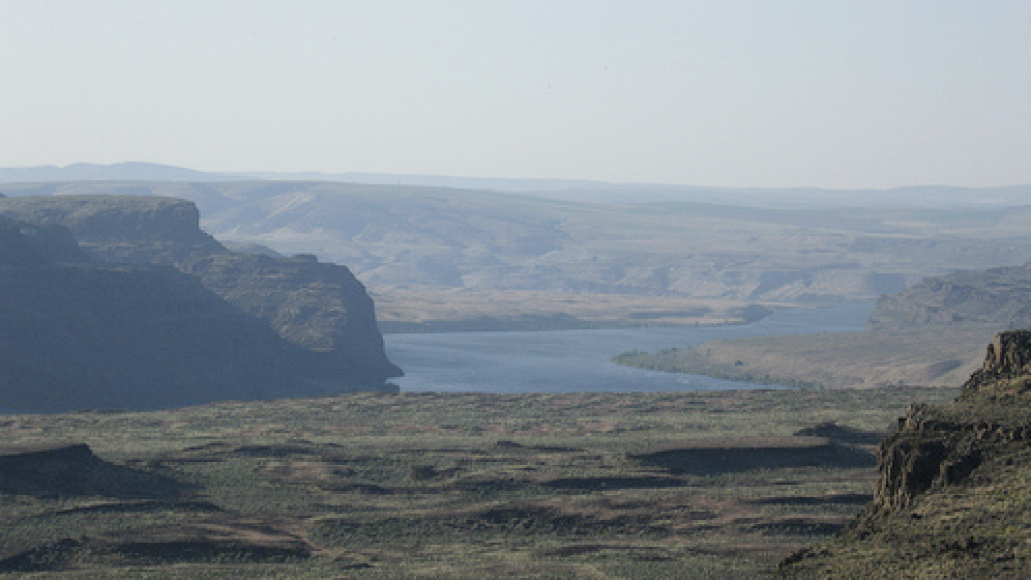 After packing up for the day we made the mile or so trip to the Gorge entrance. You can look at pictures all day of this place but nothing will ever be able to capture how gorgeous the Gorge in George really is. With deep plummeting canyons leading down to the blue Columbia River, this is the venue of all venues. It is unrivaled by any competing festival show. After trying to take in everything I finally got around to doing my job, listening to music.

Doves – 2:20 p.m. – This English trio has a lot of sound to offer. Jimi Goodwin (bass) (to the right below) can really sing and belted out numerous songs from their latest effort Kingdom of Rust. Most famous in the States for their song “Black and White Town”, they rose above that song to appeal to any casual listener. With haunting melodies that come off effortlessly, it would be a shame to pass them up if you have the chance. 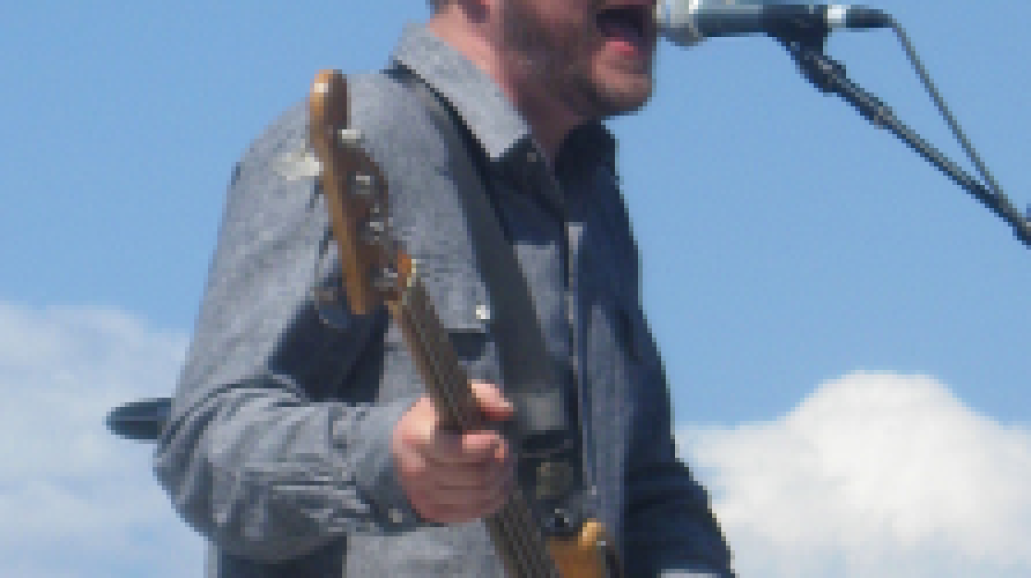 M.Ward – 3:25 p.m. – I decided to stick around the Main Stage for a while and camped out on the lawn. I found out the reason why it was so easy to get close to the stage for any show I wanted, because the real view is from the lawn. Before Sasquatch, M. Ward wasn’t a name I was particularly gunning for, but the star in my program next to his name suggested I check him out, and they were right. With a ’60s sound and prominent stage presence, he reminded me of a man that could have been famous in the ’60s, and that is a compliment.

Devotchka – 4:30 p.m. – Lets face it, folks… Devotchka knows how to put on a show. When you’re not listening to their anthems in indie movies and sleek car commercials, you see a band that rivals Gogol Bordello in the gypsy punk genre. However, Devotchka is not Gogol, they are Gogol if he decided to stray away from staccato and 32nd notes. The result is contagious.

My Honest Confession: All right this is where you’ll hate me. Yeah, yeah, yeah, I am “that guy.” I decided to skip out on Animal Collective to check out the Tim and Eric Awesome Show Great Job! You may be thinking why? Well, AC is coming to Orlando soon enough.

Tim and Eric – 6:00 p.m. – You either love them or you hate them. Coming out in skin colored jumpsuits, fully equipped with huge testicles (yes even bigger than GWAR’s frontman), Tim and Eric (below, center) jumped right into a song about none other than diarrhea. Performing numerous skits from their show, the two demanded your attention, even if you didn’t feel inclined to give it to them. The only downside in trying to cover four seasons worth of material was the elaborate costume changes. From the back of the stage, a horrible “DJ” whose name is so forgettable his name escapes me now, would take the stage to perform five minutes worth of horrible material. Was he that bad? Well, even Zach Galifinakis, who was standing by the stage was cringing at this guys pathetic attempt at humor. Fortunately, Tim and Eric would come and save the day before you felt like leaving the comfort of the comedy tent for the blazing heat. 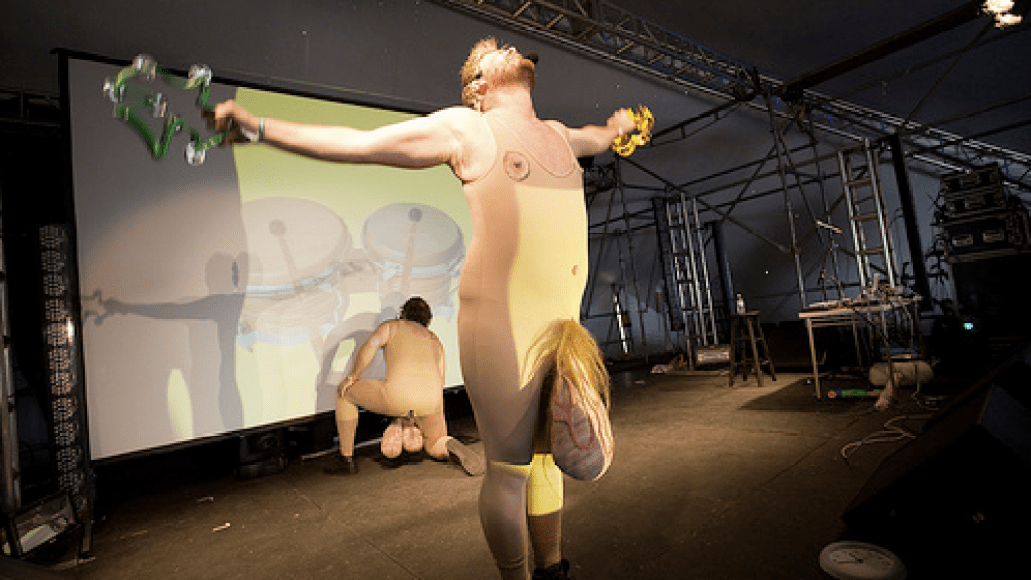 Dilemma # 1: Dilemmas are rampant at festivals. I lasted ’til the evening, however. The first? Mos Def or The Decemberists. To get a good spot for the Yeah Yeah Yeahs I went for the Decemberists.

The Decemberists – 7:05 p.m. – My first regret. Although it was a very nice night, not even the beauty of the Gorge could make me like that performance. We get it Colin Meloy, you like concept albums, but do you have to deprive your fans of your entire back catalogue? The Hazards of Love was played in its entirety, and it was entirely too long and boring. Granted I will admit that I have not heard this album in its entirety yet, but it wouldn’t kill the band to play some music from their past, or god forbid, mix it up some.

Yeah Yeah Yeahs – 8:30 p.m. – Karen O is hot. Okay, we got that out of the way. Between eight and ten in the evening is the best time to play at the Gorge. The sun setting behind the stage has the ability to make it appear as if it’s floating. On Friday night, the colors were unimaginable and palatable, but in all honesty, it was hard to keep your eyes off the stage — especially given the oddities. A huge eye ball drifted behind drummer Brian Chase as O took the stage, looking like she bought her clothing at a shower curtain liquidation sale. Opening with “Heads Will Roll”, the band got the momentum moving from the start. 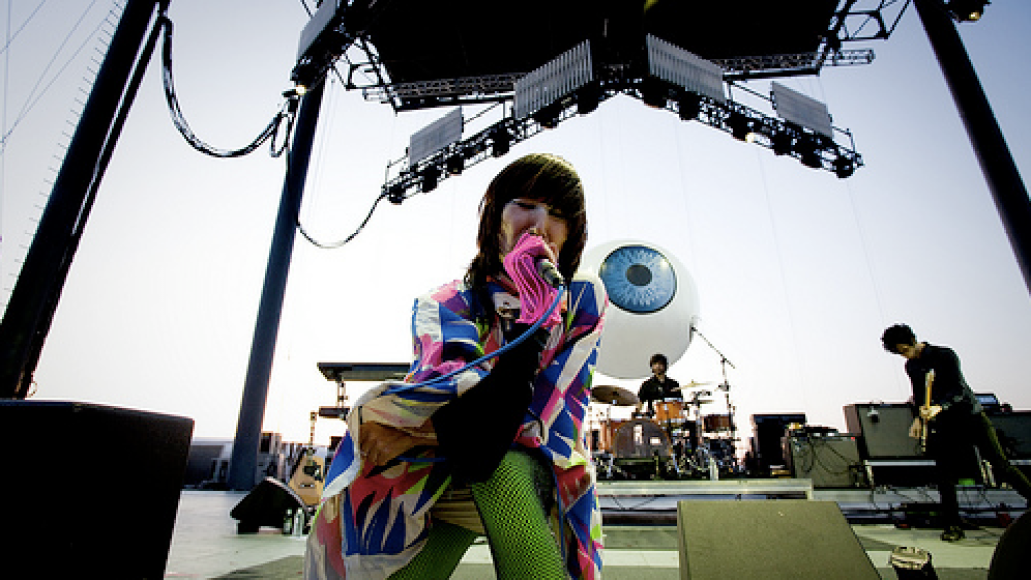 The Decemberists should take a cue from the Yeah Yeah Yeahs as Karen O & Co.’s setlist included a little bit for any type of fan. It’s Blitz has been an evolution in the way the Brooklynites make music, and also how they perform it. Karen O has hit 30, and it does show. She’s not drunkenly stumbling around but moving gracefully as if she knows that her music and her own self have matured. Slowing things down, they did a haunting acoustic version of “Maps” that had the whole crowd singing. Just when it appeared like that would be the end, they ripped into a heavy performance of “Y Control”. Relevance isn’t something the band has to worry about, and this performance set that in stone.

Kings of Leon – 10:00 p.m. – I first saw Kings of Leon (below, center) while I was at a taping of the Carson Daly Show years ago. At the time, I wasn’t very impressed with their song “The Bucket”, and even still I’ve yet to come around. However, after all my stale considerations for the band over the years, I find myself in love with the song “On Call”. But still, Kings of Leon, headlining a festival? Kings of Leon, selling out Madison Square Garden? I couldn’t believe it. As much as I disagreed with their new classification, I decided to stay and watch until I didn’t recognize a song or got too bored. Neither happened! After an hour, I realized that I had stuck around for close to 60 minutes of KOL…and enjoyed the hell out of it. Playing songs like [my favorite] “On Call”, “Fans”, their big hit “Sex on Fire”, “Charmer”, and “Use Somebody”, Kings of Leon had a chance to prove to me that they do deserve their new title as headliner. CoS at Sasquatch!: Day One