If you recall, yesterday we ran day one and two of Nick Travers’s three day excursion into the Pacific Northwest. Last we read, Travers was floored by performances from NIN and TV on the Radio, but wasn’t too thrilled with Jane’s Addiction’s closing set. Let’s see how day three unfolds…

After leaving Janes Addiction I definitely needed a beer, but it’s hard to be determined to drink when you’re so tired. Regardless of the ensuing parties nearby, I went to sleep early. Before I dozed off, I could hear people playing Marco Polo across the campsite and it left me wondering, “Do people not play Marco Polo in water in the North West?”. Deciding not to ponder it any further, I went to sleep.

I have to admit that I wasn’t very excited about day three initially, but of course, it turned out to be one of the best days the festival had to offer. Despite my attempts to get there early, I was still stuck in a long line to get in. This made me miss Deerhoof. This made me angry. Trust me, you wouldn’t want to see me when I’m angry (Hulk, anyone?). Fortunately, I had some time to get a good spot in for Grizzly Bear and the day began. 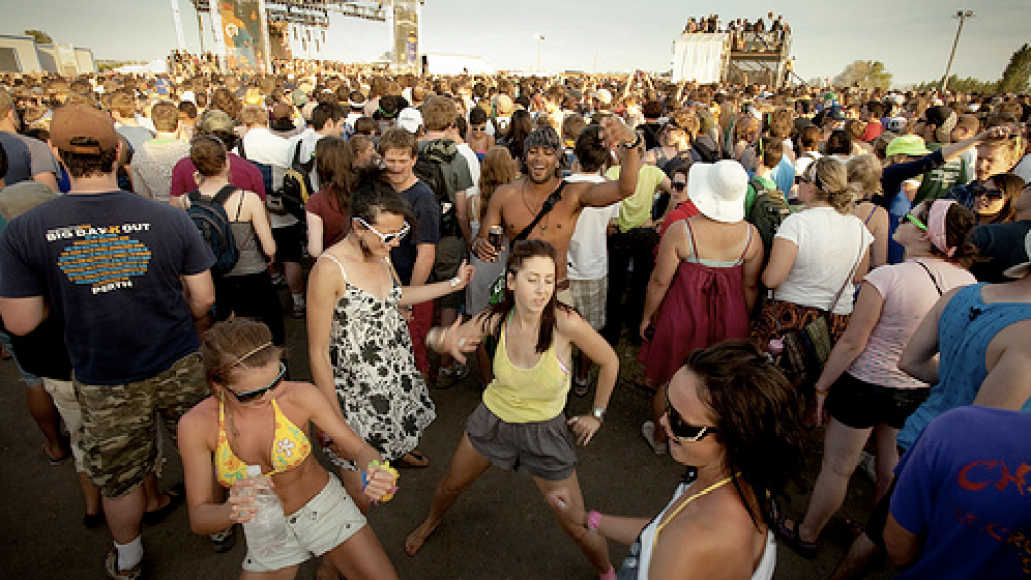 Grizzly Bear – 1:50 p.m. – Oh Grizzly Bear, how much more awesome can you be? I saw you perform at Florida State University’s tiny Club Downunder years back and even then you were awesome. Then you get asked to tour with Radiohead?! I make no qualms about it: Radiohead is the best band on Earth. If they were a food, they would be ambrosia. So when they think your music is good, it’s time to listen up, especially with their latest effort, Veckatimest. Grizzly Bear, however, should be listened to at night. The atmosphere that they create goes beyond chamber pop, it’s more over engrossing. I wish I had more sets of ears to pick apart exactly what is going on in every song. Seeing them years ago and then now gets me thinking that this band can only go up from here. They’ve matured into a band that demands your attention, even if they do it with soft music.

Santigold – 2:50 p.m. – I’m not too familiar with the artist, to be honest. At the time, the only thing I knew was that there was some changing of the name some while ago (o to i, right?). So, during this set, I decided to go and finally check out the media area. Yes, it took me three days to get there! When I arrived it was filled with people on laptops, working incessantly to be that person that got the first story on the internet. But there is a problem with this. How can you cover a music festival if you aren’t watching the music? As if they were poisoned with radiation (or swine flu!), I quickly retreated from that trailer and got to see why the media area was so awesome. It travels on a road that goes to probably the most scenic area of the Gorge. Even better, the stage is still visible off to your left, and as I continued down the trek, my interest in Santigold increased. 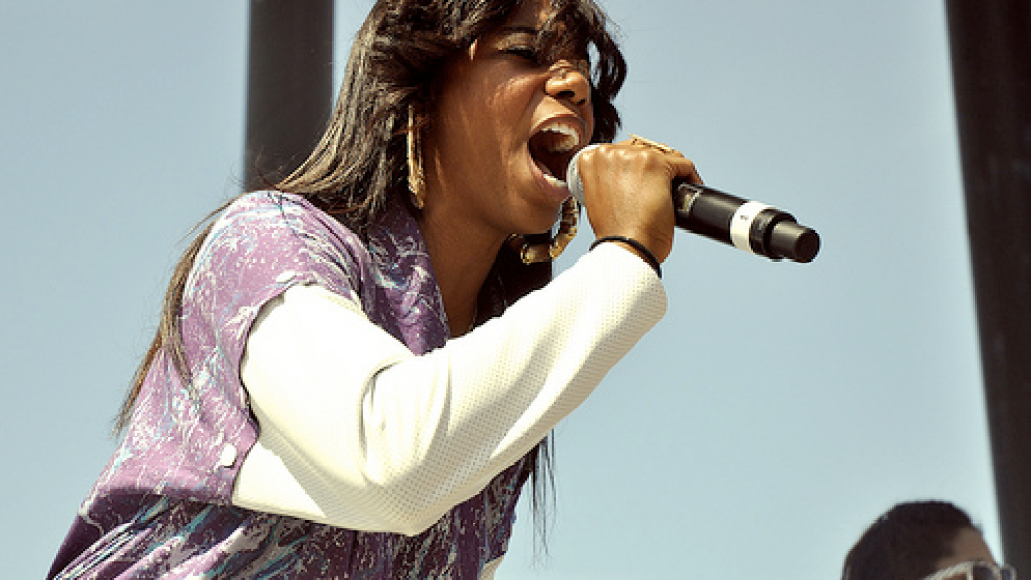 Behind the scenes, I heard the artist’s key advice about not eating Burger King before going on stage. I thought that was a no-brainer, but I guess you live to learn, right? Right. There was still some time to kill before she went on, so I reached a lounge that was directly next to the Gorge. To my surprise, I saw the most horrific sight of the whole weekend. It was someone playing Rock Band, the fuckin’ faux performance video game, all the while an engaging music festival was raging 500-feet away! I couldn’t even fathom how that was possible and will forever have to add it to the list of things that grind my gears. Time was running out and my excitement finally peaked, so I proceeded back to the lawn, with the good ol’ folks (the ones there to see and experience actual music), and just as I expected, there was already a massive dance party underway. It was initiated by a guy that was throwing his body in every direction until everyone else caught 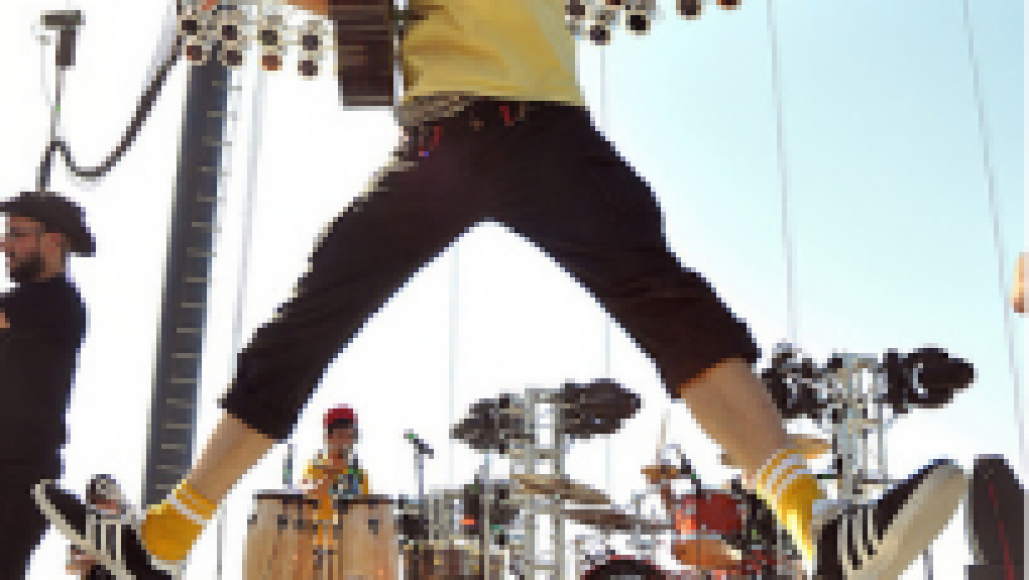 on, producing something that should have taken place in the dance tent! Santigold won everyone over, entertaining what was one of the largest crowds that any of the day performers held all weekend. Perhaps, this foreshadows a great career in the making.

Gogol Bordello – 3:50 p.m. – I’m always surprised to see that the violin player from Gogol is still alive. He has got to be pushing a hundred, and with a performance that must be draining on the body, it really makes you think how far modern science has come. Perhaps with all the constant moving and exercise, he keeps in lean shape. I will say though, I love Gogol Bordello, and it’s one of the most interesting relationships that I have with any band around today. Simply because I don’t own any of their albums, and probably never will. They’re a live act. They could never be as good on record as they are on stage. When Eugene HÃ¼tz (to the right) is not running around stage (a rarity), he’s still singing his heart out, and in such a fast paced manner that I’m shocked he has time to breathe. Throw ’em any festival to perform at and they’ll definitely be the high point of the weekend. I would always suggest them.

Fleet Foxes – 4:55 p.m. – Gogol went a little long, and this would mess up the rest of the action for the main stage. Soon enough, the “hometown” five-piece came out and started their set. With awkward conversations involving the audience between the set and songs that were quickly forgotten, it was a shame that Fleet Foxes’ set didn’t get cut a little short. Like Shania Twain famously said, “That don’t impress me much.” This set was a bitter disappointment, especially after I heard about the off-the-wall performance of Monotonix (see below, center). Chalk that up to one of the weekend’s bigger mistakes. Oops. 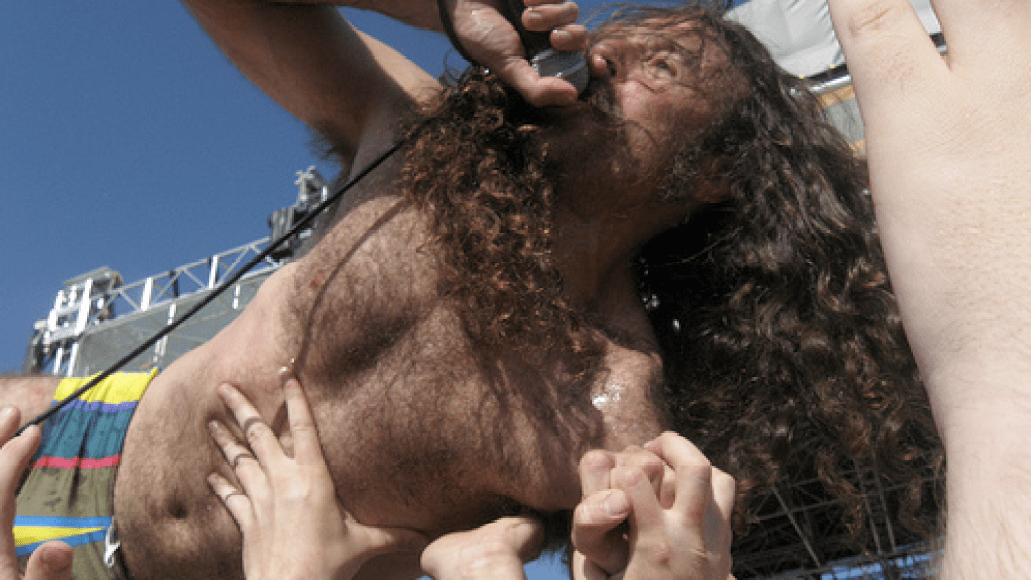 Silversun Pickups – 6:45 p.m. (give or take) – Scheduled to perform a little after six, it took quite a while to get them on the stage. This led me to Dilemma # 2: Silversun Pickups or Girl Talk, which was starting at 7:15 p.m.! Recent Silversun single “Panic Switch” (off of this year’s Swoon) had been stuck in my head all weekend and I lingered around to hear it. Eventually the band came on, they chugged through a few, and the single surfaced. Gorgeous. It’s incredible how they get that bass to sound so distorted.

As I made my way over to Gregg Gillis’ dance part, the sun was beginning to make its descent. Pretty soon the festival felt like it was a party at the end of the world. Maybe it was the idea that this would be the last night of the festival, I don’t know. Regardless, time was running out, and it wasn’t going to waste a minute away.

Girl Talk – 7:15 p.m. – I think it’s safe to say that you don’t have a music festival if Girl Talk is not there. Tents can no longer contain Gillis as he has to perform on a stage, and despite the stage switches, it always seems like concert promoters underestimate him as the crowd is always at capacity. I have never seen people enjoy themselves so much to music that wasn’t necessarily played live. With huge “GT”-adorned beach balls floating around the crowd, and the evening turning to night, it was a great place to be. The grand finale included a huge inflatable whale that only made it a few rows back before it was deflated by everyone rushing to touch it. I was upset that I had to leave the Silversun Pickups, but this melancholy moment hardly lasted long. With so much music to enjoy, it’s hard to be upset.

Explosions in the Sky – 8:45 p.m. – Here’s a band to end a festival. The Austin natives came out proclaiming that they were going to contrast Girl Talk by playing “serious” music. Needless to say, they also told everyone to sit back and relax, and that is just what we did. Explosions… is another band that I don’t really listen to on record, but live they’re amazing. How can they be hitting their instruments so hard only to produce sounds that come across so clean and crisp? I think it would be safe to say that repetition is key. One can only imagine the practice that goes into every song, just to get the nuances of every song down. They connect in every way that a band should connect, playing off each other and feeding off the crowd’s emotions. What’s more, they have the unique ability to transition from whispers of a melody to a forceful and epic conclusion, one that makes you stand up and bang your head, possibly even against your will. If I ever get wealthy enough I would just pay them to follow me around and provide a soundtrack for my day to day life. Hey, it can happen! (McWorld! Yeah!)

I decided that nothing was going to beat Explosions in the Sky, so I journeyed back to the campsite. Apparently, Ben Harper (and his Relentless7, seen below) went on very late and I could hear him doing his thing from far away. It was nice to be camping in a place where the main stage was both visible and audible. I’m not the biggest fan of the guy, but I enjoyed hearing his rendition of David Bowie and Freddie Mercury’s “Under Pressure”. 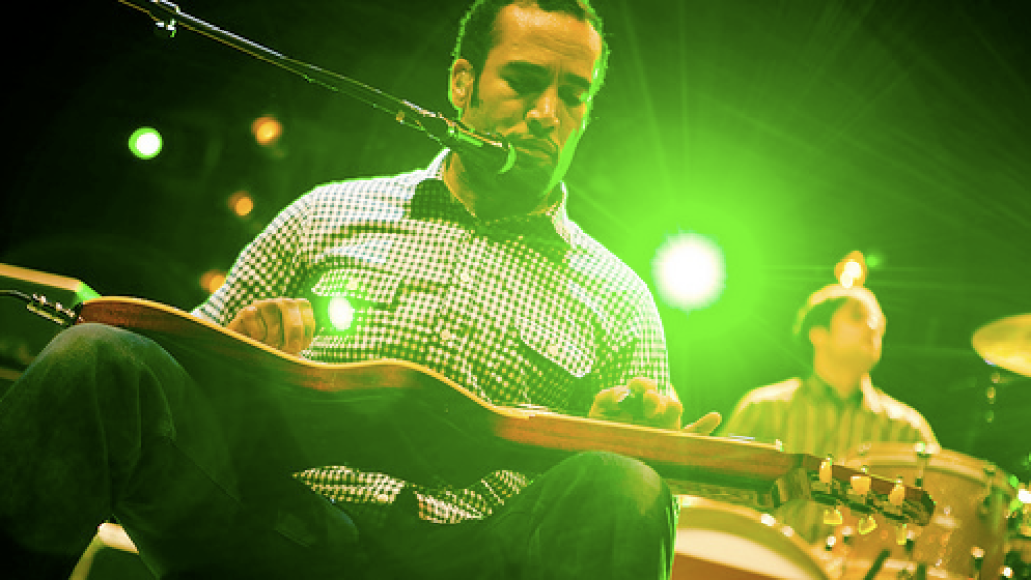 Totally drained from the music, the day, and the weekend, I hit the sleeping bag for my last night at the Gorge. I was fully appreciative for the experience as Sasquatch! is a festival like none other. It combines a place to visit, even for its natural beauty, with some of the best musical acts in the world. The result is something that doesn’t need words, only eyes and ears. For those of you that couldn’t make it out there this year, you can live vicariously through me, but I strongly suggest you book some plane tickets for next May!

CoS at Sasquatch!: Day Three