Bigger headliners, popular acts, and more comedians fill out Day 2 of Nick Traver’s three-part series on last weekend’s Sasquatch! Music Festival. Be sure to stick around tomorrow for his closing thoughts on Day 3, and please feel free to comment and even share your experiences, too!

It’s odd how you’re able to adapt to your surroundings. After only one night at the Gorge, you feel as if you are at home. Granted, it might be a little more smelly, but the people around you are in the exact same position. So, what do you do? Well, apparently you party. The campsite after dark becomes a huge extravaganza with different campers competing for their music to be heard the loudest. It’s incredible. You go and listen to music all day in the blazing sun, and then while freezing at night, you’re surrounded by insatiable music lovers still demanding more tunes. Some might find this annoying, but it’s actually comforting. Once you learn these “Gorge” people are just like you, the nights become something to look forward to and enjoy. Soon enough, however, sleep will eventually win — regardless of how loud that nearby stereo may be.

On the second morning, I woke up hot, sweaty, yet ready for another day in the sun. Applying massive amounts of sunscreen and loading up on water, I took to the mile or so trail to get back to the Gorge. In an effort to conserve my own energy, I decided to camp out on the lawn for a while. This turned out to be a great idea, considering the madness that would erupt later in the evening.

Street Sweeper Social Club – 1:10 p.m. – Up until this moment I had only heard what Morello and Co’s. new outfit had to offer from their website. My first inclination was, “Wow this sounds like Rage [Against the Machine], but not as good.” It’s unfortunate to compare Boots Riley with Zach de la Rocha from Rage but it feels like the same type of music — only Riley doesn’t have the charisma of de la Rocha. Personally, I think the guy should stick with The Coup and Morello should save those awesome guitar licks for some new Rage material. If you feel otherwise, the Club will be releasing its self titled debut in June, and currently they’re on tour with NIN/JA. The Walkmen – 2:05 p.m. – The Walkmen definitely practice a lot. They’re very tight live and put on a promising performance. “The Rat” was their highlight of the afternoon for sure, despite being their “hit”song. I think they know that song is good and bust out all the energy for it. There’s something admirable about that.

Safety Move #1: No dilemmas today, only looking out for my own, really. The second day was shaping up to be the hottest day of them all, so I soon went for shelter in the comedy tent and I will tell you that once you’re there, it’s hard to leave the shade.

The Red Wine Boys – 3:30 p.m. – Consisting of Todd Barry and Jon Benjamin, the Red Wine Boys don’t try to be anything else. They came on stage with full glasses of red wine and no jokes. They really only set up a couple of bits and improvised the rest. They were snobby, pretentious, but… hilarious. Handing out fake bottles of wine and getting people on the stage to do ridiculous things (e.g. spraying people with “red wine” for a couple of minutes). Barry complained that he used a moist towelette to clean his glass and was tripping out. Overall, for winging a whole performance, they left me satisfied. Aziz Ansari – 4:45 p.m. – Hopefully all of you have heard this name before. Ansari (above, center) was Seth Rogen’s enemy in Observe and Report, where he delivered the film’s best lines. (We all know that he would never actually blow up a Chic-Fil-A. No, that place is too fucking delicious.) He can also be found on NBC’s Parks and Recreation. I had never seen his stand up before but I have a great feeling about him. He’s the comedian of a new generation. It’s easy to relate to his jokes because he’s talking about things that were happening when we grew up (e.g. having a punchline that included a reference to the Disney “classic” D2: The Mighty Ducks). He shocks you, and takes a different route to a laugh than expected, and it’s always funnier than you hoped for.

Zach Galifianakis – 6:00 p.m. – Galifianakis is the man. I have been following him ever since his show on VH1 Late World With Zach. It’s crazy to think that he isn’t as famous as Seth Rogen, Jonah Hill, or any other of the Apatow crew. Everyone stood up for his performance, which doesn’t happen in the comedy tent. This caused some problems as there were two distinct factions in the tent and only one dire question to ask 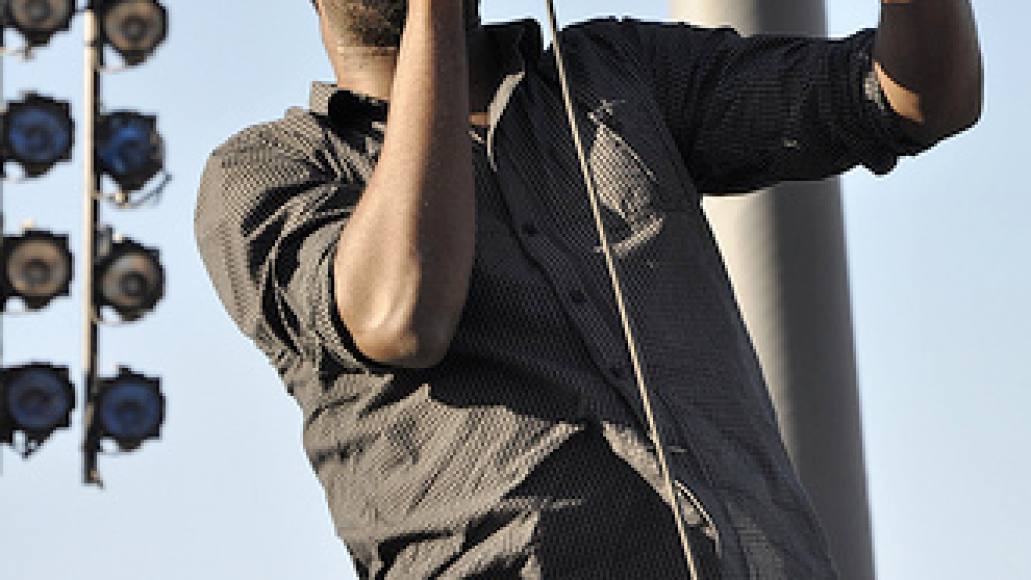 yourself: To sit, or not to sit? Galifianakis played off this as he brought people from both camps on stage to debate it out. In the end, he kicked both factions off the stage, declaring that he didn’t really care. That’s just how he is. In addition to the regular comedy routine, he played his grand piano and introduced the audience to characters he had been working on. The rest of the set included a song with Todd Barry, and a return to his Comedy Central roots which had him dancing around in a suit that lit up while he tore down huge pieces of paper, all with jokes that are better left unsaid. For those who need their Zach-fix, he can be seen in the upcoming Todd Phillips film, The Hangover.

TV on the Radio – 7:00 p.m. – Seeing TV on the Radio at Lollapalooza two years ago afforded me the opportunity to show up to their set a little late. Each of the band’s releases only elevates their success and popularity. Their newest effort, last year’s Dear Science, topped most of 2008’s “Best Of”-year end lists (including ours). That’s why it’s odd that they’re not as famous as their music alludes them to be. Then again, it’s not like they care. Keeping fans satisfied, they ended the well rounded set with “Staring at the Sun”, which seemed fitting as our own sun was making its way below the horizon. Altogether, a perfect closer to a band that nears perfection with whatever endeavors they choose to take on.

Nine Inch Nails – 8:00 p.m. – What is there to say about Trent Reznor and Nine Inch Nails? They defined a generation of goth kids and penned some of the best known songs about isolation and paranoia. With all the work Reznor has been offering his fans in recent years, it comes as quite a shock when he proclaimed that this current tour would be his last. I saw the group at Lollapalooza last year and he was sick. Yes, medically sick. He canceled the shows before and after Lollapalooza, but still managed to champion through the weekend closing set. How were they? Well, even on an off day, Reznor knows how to bring it. He put on the best light show I have ever seen (and I have seen Daft Punk!). This year, it’s more stripped down. Having not seen Reznor when he wasn’t ill, I can fully appreciate NIN now. Holy cow Batman, can this guy sing! Opening up “Home”, off of 2005’s With_Teeth, Reznor proceeded to put bleed into his performance, only this time not literally. With classics such as “Terrible Lie”, “March of the Pigs”, and the epic finale, which included “Survivalism”, “The Hand That Feeds,” “Head Like a Hole”, and an encore of “Hurt”, Reznor sealed the deal and proved he’ll always know how to please his fans. It wasn’t all about the hits, either. This show also saw such gems as “La Mer”, “Burn” and a unique Gary Numan cover of “Metal”. Everyone had their lighters out for “Hurt”, and it was a poetic ending to what may be the last time I will ever see Reznor and Co. Much like a good showman, he left us all wanting more. 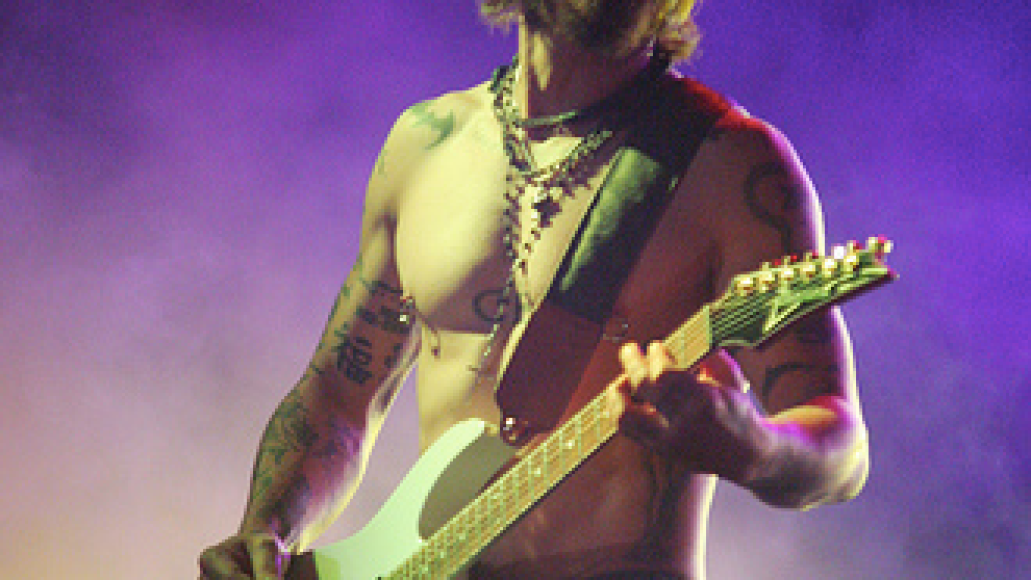 he should stay there. It’s no secret that NIN is carrying the show and after rumors of infighting before the tour even started it makes me believe this tour might be about money and not really about the music. Busting out with “Three Days”, Jane’s seem to be stuck in the early ’90’s. While tourmates NIN have evolved over the years, Farrell has not. A predictable set included “Been Caught Stealing”, “Stop!”, and closer “Jane Says”. When Farrell wasn’t babbling about having a snake (what was that all about anyway?), Dave Navarro was soloing away, possibly not even listening to whatever his “bandmates” were playing. But hey, he is the famous one right? The set left me unsatisfied, especially after NIN’s epic set. Is it possible to let Reznor close out the rest of the shows on the tour? Please?

CoS at Sasquatch!: Day Two