This past Wednesday, English trio Keane finished the last of its North American leg in style, at New York’s prestigious Radio City Music Hall. In support of its third studio album, 2008’s Perfect Symmetry, the band hit the Big Apple with confidence and precision, something in stark contrast to when they were largely riding on the success of 2004’s Hopes and Fears.

After the spacey rock of the Helio Sequence and the strong guitar work of Mat Kearney, Keane took to the stage ready to celebrate its grand tour finale. Playing against a backdrop of colored triangles, the band started the show with a one-two punch of “The Lovers Are Losing” and “Everybody’s Changing”. While these two songs made for a fine opening, the show didn’t really take off until they kicked into “Again and Again”.  From there, the set hit all the right notes with every subsequent song.

While the band did have access to two video screens on both sides of the stage, they only used them 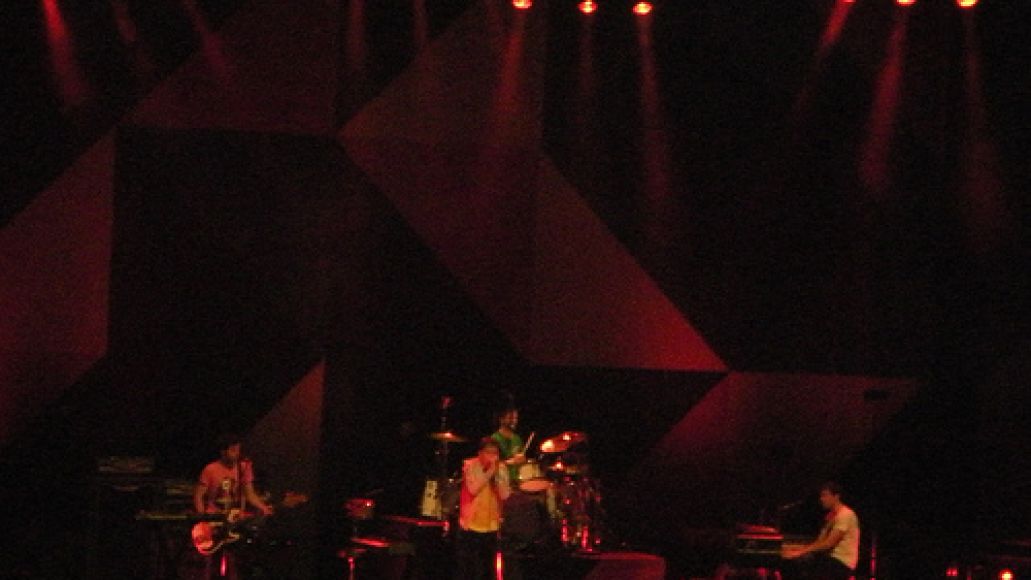 occasionally. This worked in their favor because the audience was focused on the three throughout most of the show anyhow. The semi-rare use of the monitors also meant that when there was something on the screens, you knew the band wanted you to pay attention to them. At various times, the screens flashed videos that included landscapes moving into each other and various words, all in a style that would feel at home on a Super Nintendo.

Even though the visuals did add to the songs when they were used, the real focus was on the band. It was nearly impossible for the focus to be anywhere else.  From the first song to the last, Keane held the audience’s attention through their nearly boundless energy and various arrangements. Focusing mostly on cuts from Hopes and Fears and Perfect Symmetry (only three songs were played from Under the Iron Sea), the band switched the show up enough to keep it from getting stale. Halfway through the show, lead singer Tom Chaplin went onto one of the rafters near the crowd for a solo acoustic performance of “Playing Along.”  This was followed by two more acoustic performances,this time around with the full band, during which Chaplin introduced his bandmates as, “the three most handsome tourists in New York.”

Speaking of Chaplin, this show proved what an amazing and underrated frontman he is. Throughout the concert, he got the crowd to sing along, moved all around the stage, and ran halfway up the rafters on both sides. He did all this and still managed to sound as strong as he does on the record. He hit the high falsetto on “You Don’t See Me”, bellowed out “wrap yourself around me” on “Perfect Symmetry”, and sounded fragile on a short cover of Bruce Springsteen’s “The River”.  Several tracks also required him to play guitar, which he did a competent job at, but it was clear that he feels more comfortable out on the rafters than behind a mic stand.

Chaplin wasn’t the only one with energy. Tim Rice-Oxley is one of the liveliest pianists in rock today and he proves it on stage. On almost every song, he was bouncing his leg to the beat, swinging his head around, and generally dancing in his seat. Despite all this movement, he never missed a note.

Since this was the last show of the U.S. leg, Keane ended the concert with a surprise encore of David Bowie and Freddie Mercury’s infamous duet, “Under Pressure”. Many fans had already started to leave and quickly rushed back to dance in the aisles, making the ending feel really special and unique. All in all, Keane really pushed to make this show a great one for themselves and their fans. Not only did they succeed, but they went beyond the crowd’s expectations.

Set List:
The Lovers Are Losing
Everybody’s Changing
Bend and Break
We Might As Well Be Strangers
Again and Again
Your Eyes Open
This is the Last Time
Playing Along
Try Again
Early Winter
The River (Bruce Springsteen cover)
You Haven’t Told Me Anything
Spiralling
You Don’t See Me
Perfect Symmetry
Somewhere Only We Know
Crystal Ball
Encore:
My Shadow
Is It Any Wonder?
Bedshaped
2nd Encore:
Under Pressure