The last time Noah and the Whale hit New York, it was a performance worth forgetting. But because we really dug the band’s debut LP, Peaceful, The World Lays Me Down, we figured we’d give the English rockers another shot and sent our own Rose Martelli to check them out last weekend.

The small but audible British-expat contingency that turned out for Noah and the Whale’s headlining set at Bowery Ballroom Friday night had its reasons for occasional bursts of aggro behavior. For starters, the vocal mikes of lead singer/guitarist Charlie Fink, bassist Urby and fiddler Tom Hobden blew out simultaneously during the opening song, a snafu that wasn’t fixed until well after the band had dutifully solidiered on into its second number, the plaintive rumble “Give A Little Love.” During a hushed moment, the crowd’s disgruntlement began to swell, capped off by one concertgoer’s cry to “Turn it up!” (And another’s not-really-helpful yell, “Your mike is fucked up!”)

Finally it was turned up, and what emerged loud and clear were the sensitive, self-aware musicalities and skin-tight arrangements of a relatively young band that plays incredibly well together. Throughout its too-short set, the foursome displayed an ingrained feel for the vocal and instrumental stylings of English folk balanced with flashes of feedback-heavy rock. But for those who showed up anticipating a night of bop-and-sway twee-pop — a sound for which the band gets pegged a bit too often, judging by the contents of its 2008 debut LP, Peaceful, The World Lays Me Down; then again, they did name themselves 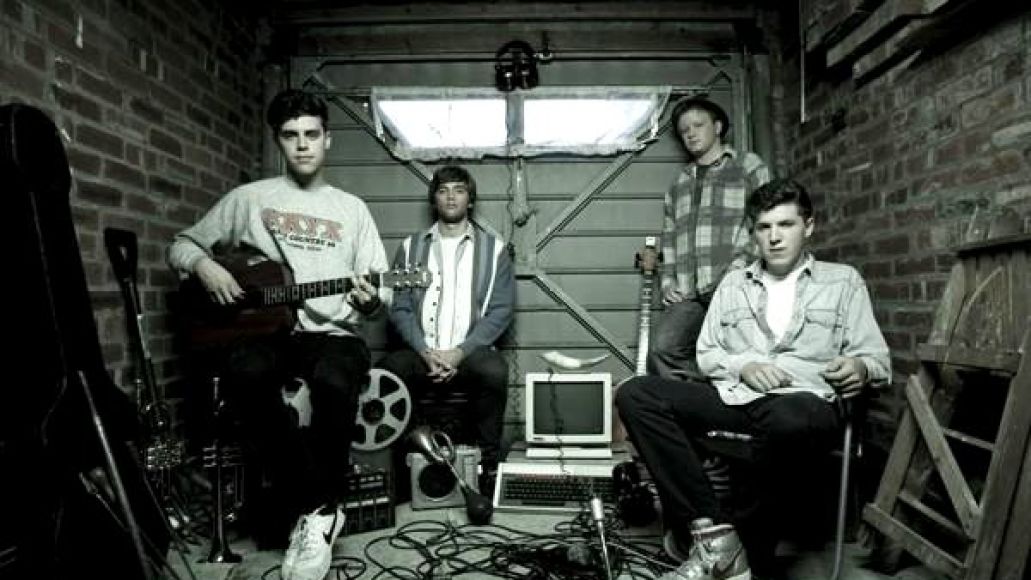 after their love of Noah Baumbach films, and they are responsible for the so-affectedly-cute-you-could-smack-it-sideways ditty “Five Years’ Time” — well, then the letdown was probably another reason why the tossers in the back of the room were restless and buggered by the end of it.

The band’s first technologically unfettered number of the night, “Jocasta”, delivered on hopes of a jangly, upbeat performance, so much so that it bore resemblance to a Flight of the Conchords-esque sound. (Also, when a chap sings sprightly of a newborn baby, “Let’s leave it to the wolves; Oh, their teeth turn it to food,” you want to believe that he’s, you know, just joking.) From there on out, though, the group was quite content to explore sparser, more mournful modulations, despite coming at the expense of an audience keen on working out its Friday night. By “Mary”, the fifth song of the set, when Fink melodically bemoaned, “When I last saw Mary, she lied and said it was her birthday,” it felt like a full-on, Red House Painters-style dirgefest was taking place, or at least some sort of Edgar Allen Poe/Samuel Beckett reading set to music.

While the band’s cohesive ability to crescendo from the pits of despair into the glorious heights of reverb heaven provided much of the show’s oomph during this middle stretch, Hobden’s contributions on guitar, piano and especially fiddle ranked as particularly impressive. Never opting for a flashy, jammy solo, his violin was simple and beautiful yet still lavish, and he often worked a rhythm of playing just behind the beat that enhanced the music’s relaxed feel.

Everyone was waiting for “Five Years’ Time”, which finally arrived as the last song of the set and not a moment too soon. The palpable welcoming of Noah and the Whale’s biggest hit made for a room full of fist-pumping, head-bopping and sing-alonging as Fink lilted in a sunshine-streaked voice about the sort of carefree atmosphere the fans had hoped to experience firsthand: “‘Cuz I’ll be laughing at all your silly little jokes/ And we’ll be laughing about how we used to smoke/ All those stupid little cigarettes/ And drink stupid wine/ Cuz it’s what we needed to have a good time and it was fun fun fun.”

An encore cover of The Smiths’ “Girlfriend in a Coma” was just as much fun fun fun, though the crowd may have been too young to fully appreciate it. Or too fitful to stick around for it.