Bruce & the E Street Band‘s stop Monday night at the Verizon Center came with some trepidation. Not because of any doubt that Bruce and his legendary bandmates would deliver, but because Washington, D.C. shows come with challenges that are unique to the city and the venue. The first is the audience, the second is the sound.

A sub–par audience means low energy and too many people making too many beer runs. This lack of enthusiasm can literally suck the joy out of a die-hard Springsteen fan, because it seems an offense against the man himself. On stage is a band, all in their 50s and 60s, who put everything they have into every song, and it seems (to this observer, at least) that the least Bruce and the Band can expect are respect and energy in return. In short, this means do not sit down during an absolutely blistering performance of “Kitty’s Back”! Which, alas, too many people did last night. Why? Because DC shows attract too many politicos, lobbyists and people with inside access to already-impossibly-hard-too-get tickets who see an opportunity to network, or simply to say they were there.

The second potential pothole is the sound at the Verizon Center. Alas, the sound mix at Verizon is notoriously muddy, too loud, and — frequently — painful. Worse, some sections are victims of awful sound while other sections get crystal-clear sound. Which section gets which quality sound is completely random.  A good set of ear plugs can mean the difference between hearing every word in “Badlands” and asking the person in the adjoining seat what song he’s singing, but most people don’t know that (or simply don’t want to use ear plugs) and then rant about the crummy sound the next day. And well they should. Poor sound has been a problem at every E Street Band show that’s been held at the Verizon Center (previously known as the MCI Center), and it can ruin a show. I don’t know what the answer is, but the problem is real and it needs to be fixed.

Those were the concerns going in to the venue last night. So when the house lights dimmed at 8:24 p.m. and I realized I’d lost my ear plugs, I expected the worst. Imagine my relief, then,  when I heard the opening strains of “Badlands” in all of its perfect, crystal clear splendor. We had great sound (in our section, at least), great seats close to the side stage, and the promise of a great show. 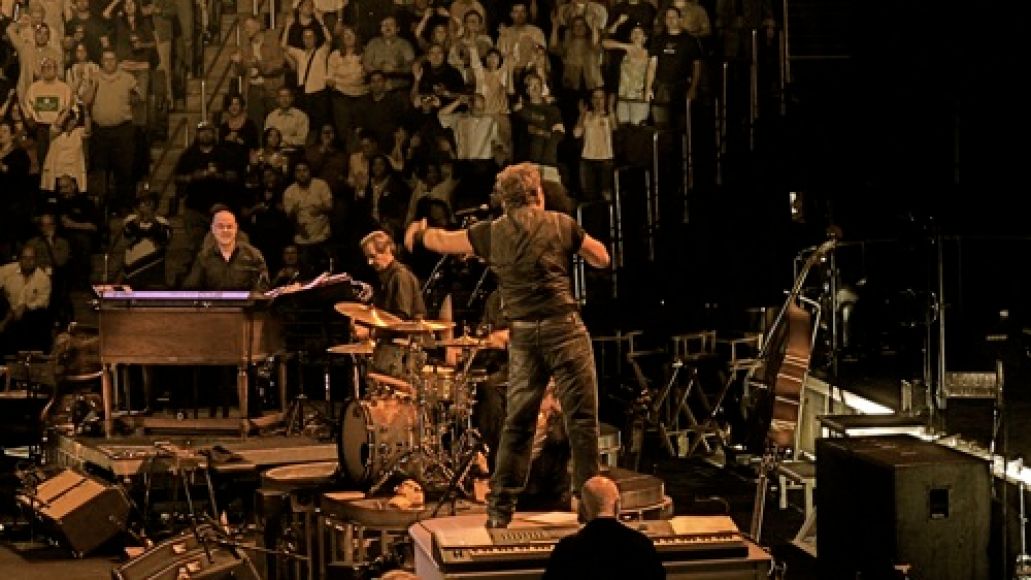 Of course, Bruce delivered. Whenever Bruce and the Band out and the audience erupts, I’m reminded of Jon Stewart’s observation after he attended a show on the “Magic” tour in 2008. “Are you a fan of joy?” he asked, and then launched into yet another one of those wild-eyed, did you see that? reviews that a Springsteen show typically elicits. Every fan in every city is convinced that they saw the best show on the tour, which is a tribute to Springsteen and the E Street Band. I won’t go so far as to say that I saw the best show on the tour last night, but I will say that I saw the best Springsteen show I’ve ever seen in D.C. — and if it were the only show I see on this tour, I’d still be happy and full of, yes, joy.

On paper, the setlist from Verizon represents a good balance, though since the tour, in theory at least, is in support of the Band’s new album, Working on a Dream, a few more tracks from it would certainly be welcome. “Surprise, Surprise” and “Queen of the Supermarket” could be worked into rotation in place of, say, “Waitin’ on a Sunny Day”, or “Outlaw Pete”, and perhaps they will as the setlist continues to evolve and Bruce works in new material.

But Bruce is the Boss, he picks the setlist, and it’s pointless to compare one setlist to another. Just know that you’re getting the songs he wants to play in that city, at that particular show.

And what did D.C. get? Nearly three hours of high-energy, rapturous rock and roll delivered in the great tradition of the E Street Band. 23 songs (25 if you count the brief snippets of Hava Nagilah and Hail to the Chief played as humorous intros to “Little Latin Lupe Lu” and “Rosalita”) that lifted the sold-out crowd to heights of euphoria in a shared, communal experience — with Springsteen playing the roles of preacher and band leader extraordinaire. Wife Patti Scialfa returned after being absent from several shows (reports are that the was injured in a fall from her horse), and Bruce was clearly happy to have her back. This time, instead of simply dedicated “Kingdom of Dreams” to her, they shared vocals on a song that’s a touching tribute to adult love well lived, in the mold of “Girls in their Summer Clothes” from last year’s Magic. Patti goes to great lengths to connect with audience members on her side of the stage, frequently singling out individuals for a smile, wink or a nod that are always enthusiastically received. This is also the first show since early in the tour that featured legendary E Street drummer Max Weinberg exclusively, as he’s been sharing the job with his 19-year-old son Jay, in preparation of Max’s absence from several European dates due to his commitment as the band leader of Conan O’Brien’s Tonight Show, which debuts in June.

There were some stand outs in the night’s set list. “Outlaw Pete”, from the new album, is reminiscent of “Jungleland” in the grandeur of its music and lyrics. Vocally, it’s a challenge for Bruce in both melody and range, and he rose to the challenge as his voice soared in the upper registers. It’s a song that definitely needs to be seen live to be fully appreciated. “Raise Your Hand” is the audience’s prompt to raise those song request signs high in the air, and Bruce has plenty of fun running back and forth pulling signs out of the audience to fill the wild card slots in the set list. We were treated to “Out in the Street” courtesy of a delightful nine-year-old whose sign read “Jonas Brothers, Shmonas Brothers…Real Nine-Year-Olds Prefer 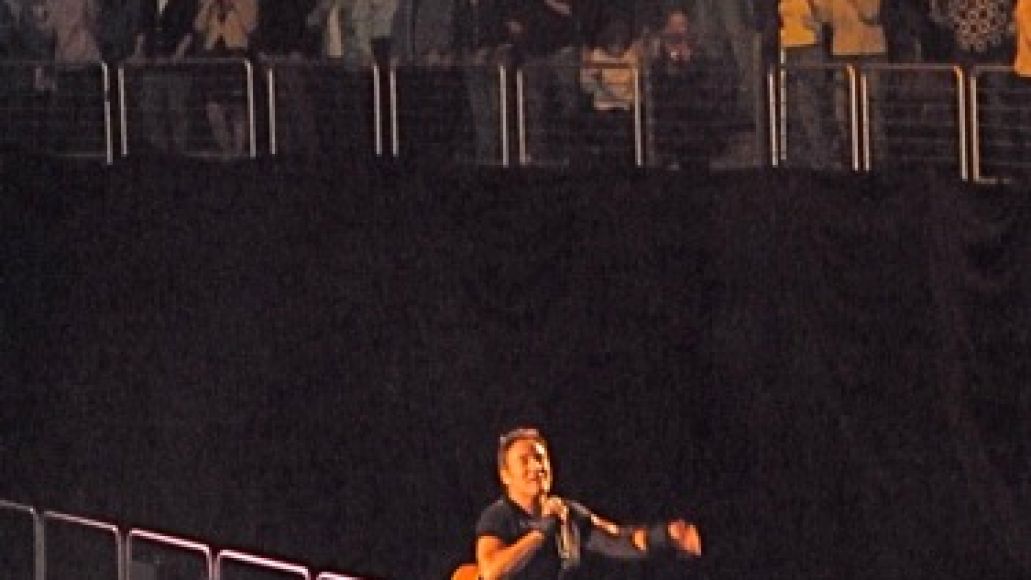 Out in the Streets.” When Bruce pulled her on stage to sing with him, she took the mic and sang like a true E Street Band fan, much the the delight of her parents and the crowd. Another sign elicited “Little Latin Lupe Lu” in yet one more unsuccessful attempt to Stump the E Street Band (truth be told, the band played it last summer in Europe) that had the audience on its feet. The best of the signs put the tour premiere of  “Blinded by the LIght” in a wild card slot, and Bruce and the Band sang it with as much polish and swagger as they did back in the 70s, when it was a setlist standard.

But the real highlights came in the encore. At a Springsteen show, the encore comes after a ridiculously short three-minute intermission, so it’s perhaps a stretch to call in an encore. However you choose to describe it, the final six or seven songs are the capstone to the setlist. This is when the house lights come up, and Bruce commands that everyone stand and stay standing until he decides the show is over. No amount of praise for “Kitty’s Back” last night would be too much. Charlie Giordano (keyboards), Roy Bittan (piano) and Bruce took extended solos that dared anyone to even hint at the suggestion that this might be an E Street Band farewell tour. Even Clarence, clearly inspired by their virtuoso display, rose to the challenge as he rose to his feet and took command of the audience with a spot on sax solo that reminded everyone why he will always be The Big Man. Anyone who chose to stay seated despite the performance they were witnessing should be banned from any future Springsteen shows.

“Land of Hope and Dreams,” which ended every show on “The Rising” tour in 2002-2003, has returned to its rightful spot in the encores on this tour. This song is everything that is joyous and hopeful about the music of Bruce Springsteen and it is, perhaps, the most euphoric audience pleaser in the modern E Street canon. As spiritual and comforting as any music you might hear in any American church on any given Sunday, and then that much better, LOHAD baptizes you in the Church of Bruce and, once a member, always a member. “Rosalita” which closed out the night was another sign request, at the request of one Barack Obama (at least that’s what the sign suggested), and it was probably the most rowdy, raucous version played in quite some time. Or maybe it just seemed that way in our section, because so many of the VIPS we’d been surrounded by had all ready left, and those remaining felt free to let their Bruce freak flags fly high, which led to much fist pumping, screaming and dancing in the aisles.

And then, just like that, after nearly three hours, the house lights went dark and it was over. Once again, Bruce Springsteen, belying every one of his 59 years, left it all out there on the stage. Those of us who laid witness to it were left exhausted and awed. Bruce Springsteen & the E Street Band do not do ordinary. Perhaps those baptismal waters come from the Fountain of Youth. One certainly hopes so, because we all hope we can ride this train forever.

—
Setlist:
Badlands
No Surrender
Outlaw Pete
She’s The One
Working On A Dream
Seeds
Johnny 99
The Ghost of Tom Joad
Raise Your Hand
Out In The Street
Little Latin Lupe Lu
Hava Nagila
Blinded By The Light
Waiting On A Sunny Day
The Promised Land
The Wrestler
Kingdom Of Days
Radio Nowhere
Lonesome Day
The Rising
Born To Run
Encore:
Hard Times
Kitty’s Back
Land of Hope and Dreams
American Land
Rosalita
——— 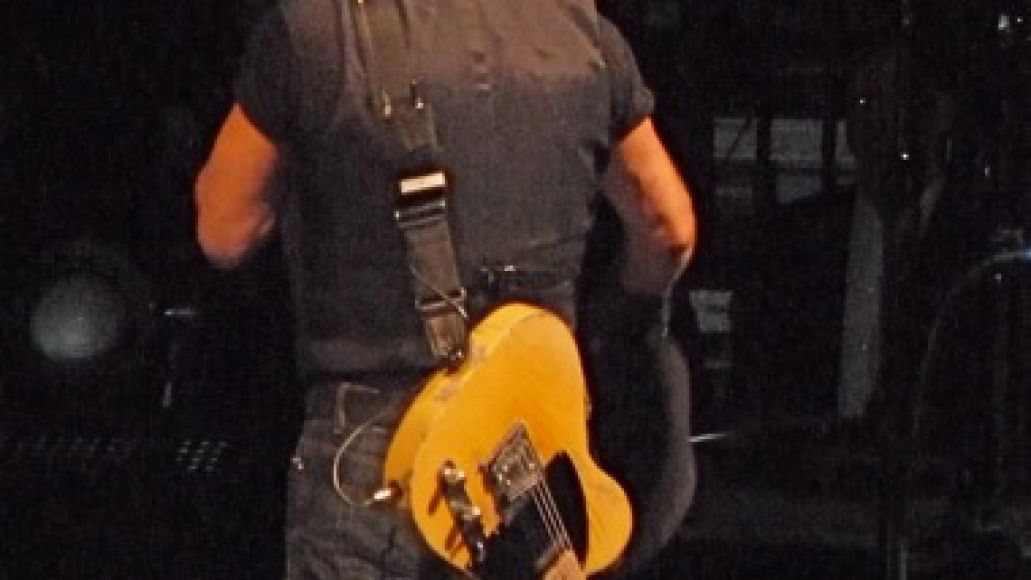 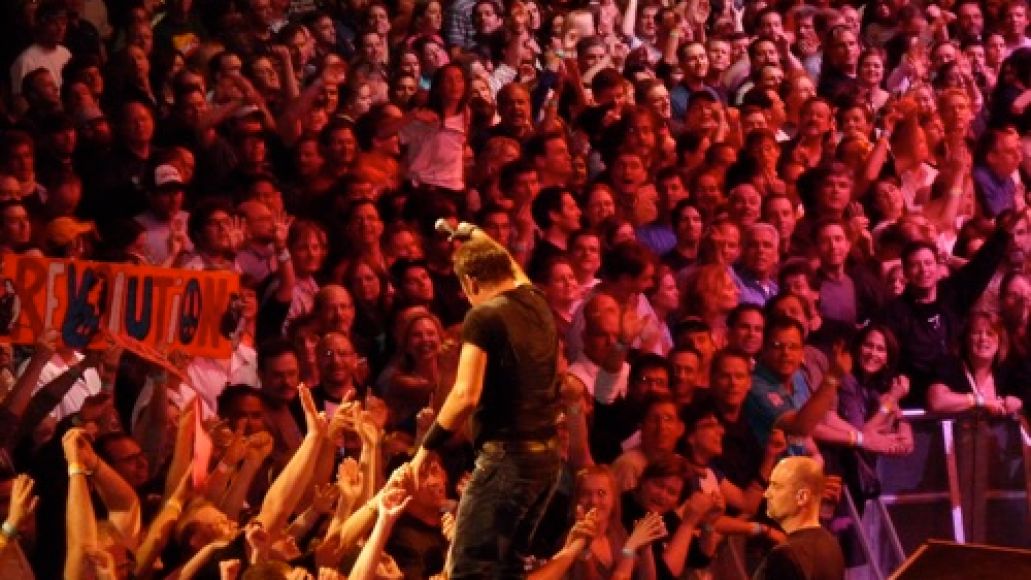 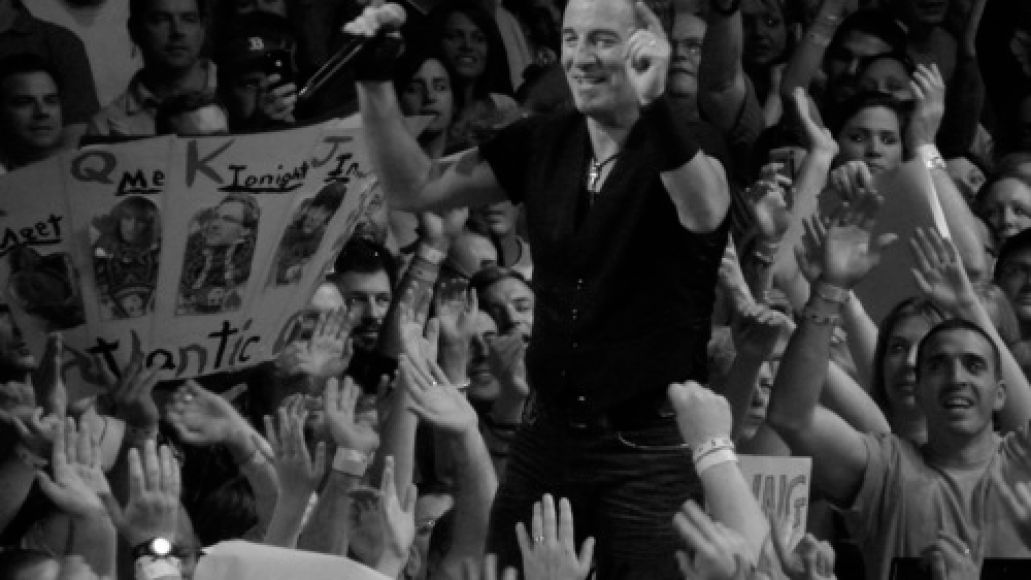 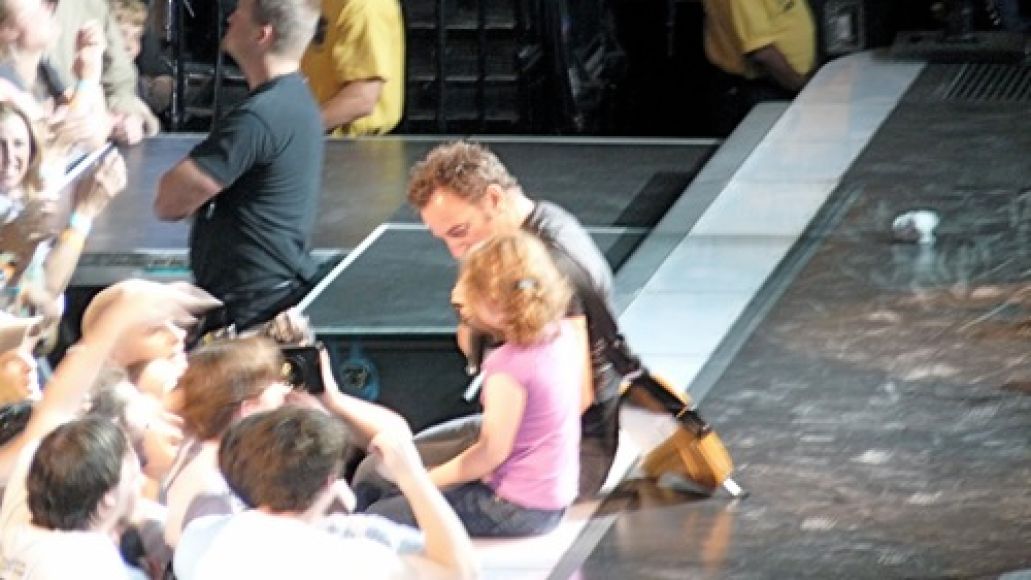 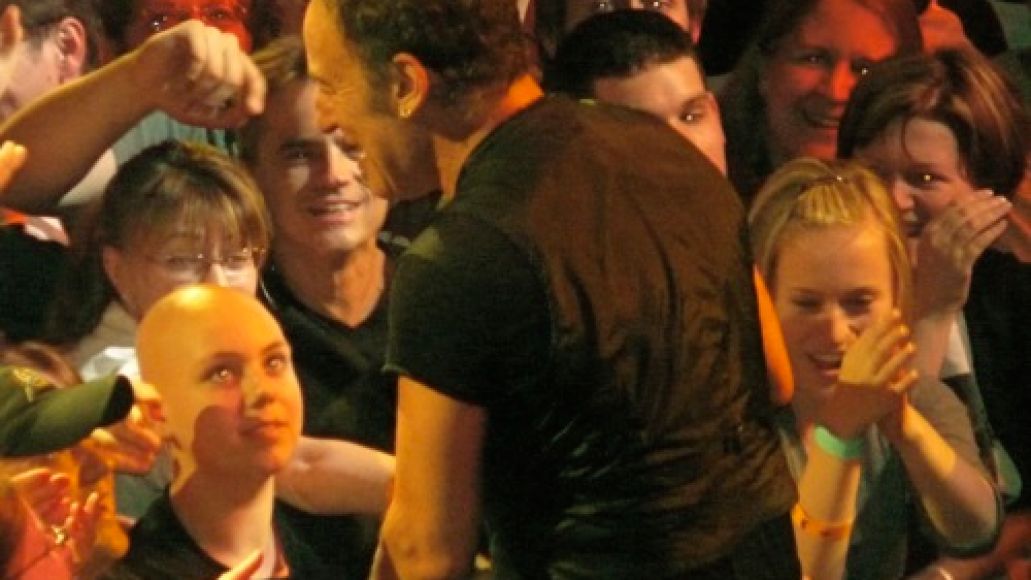 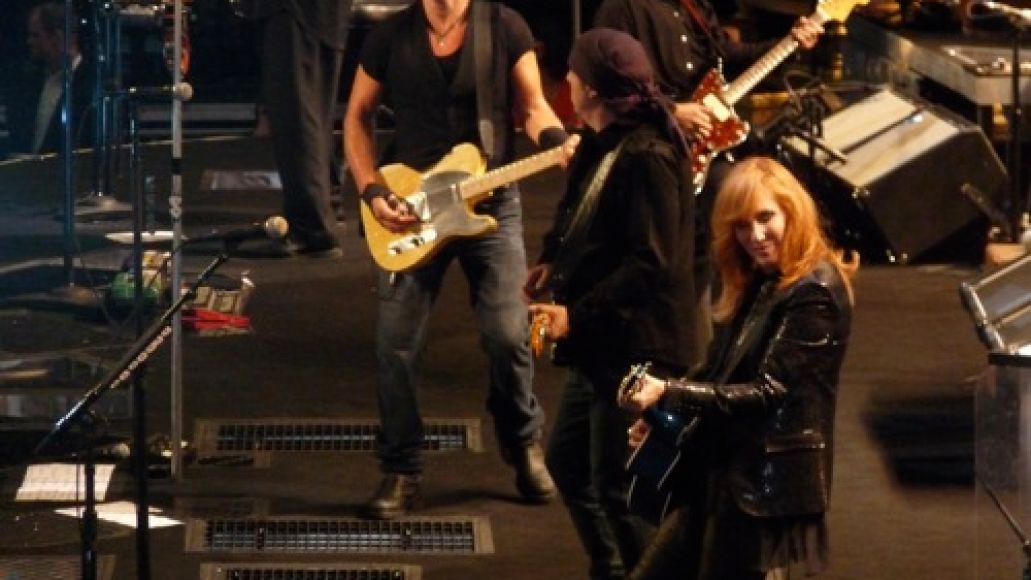 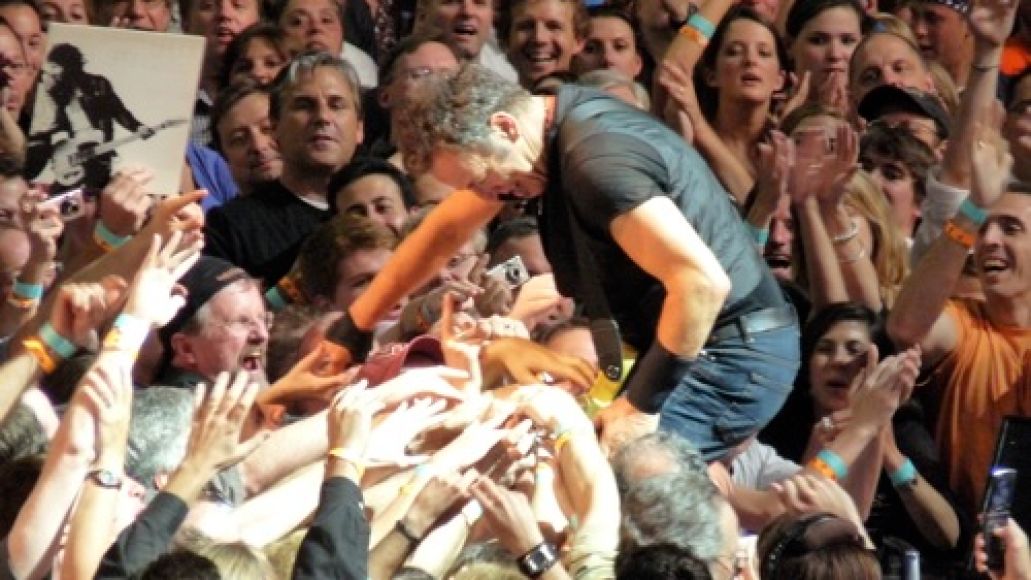 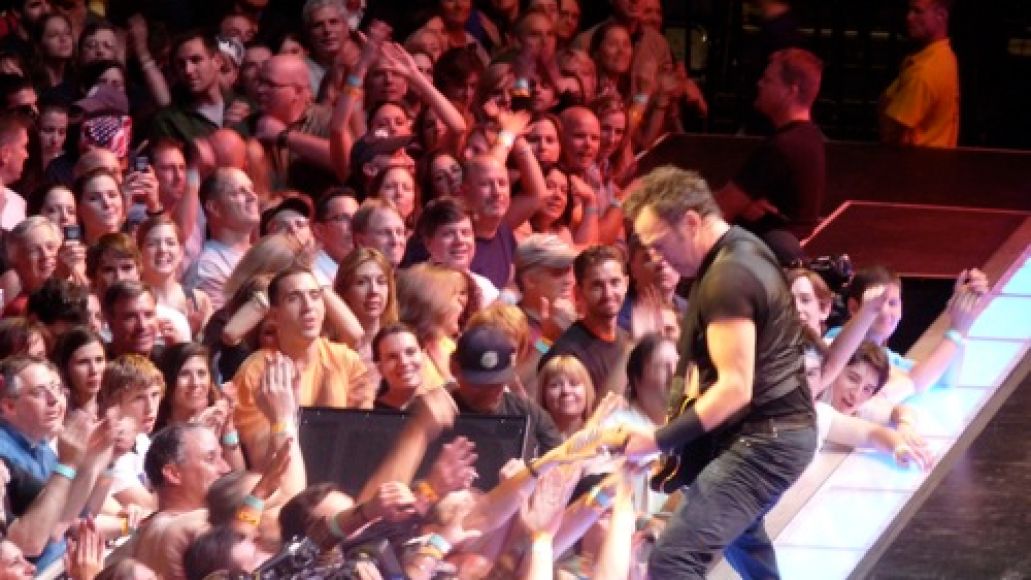 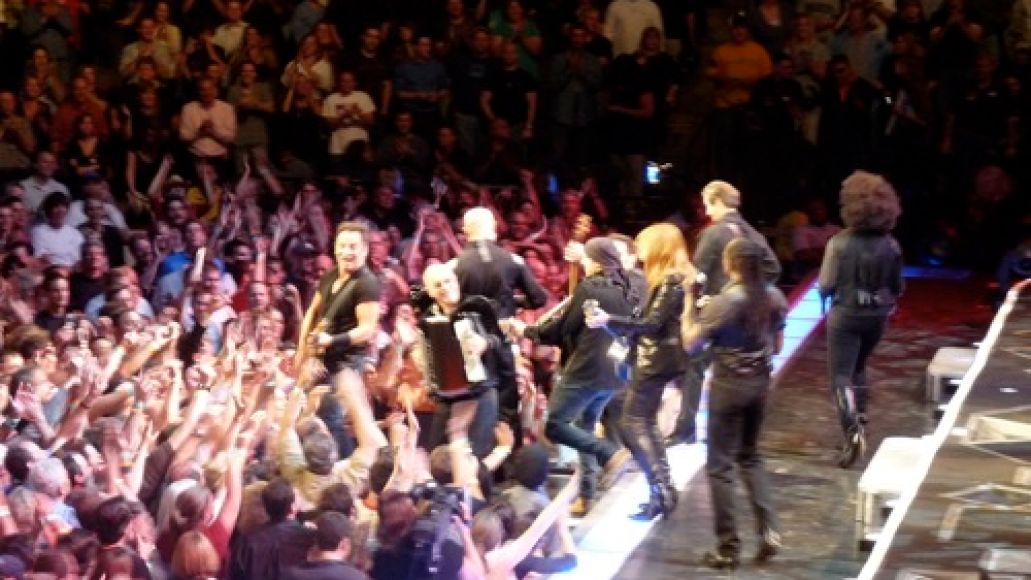 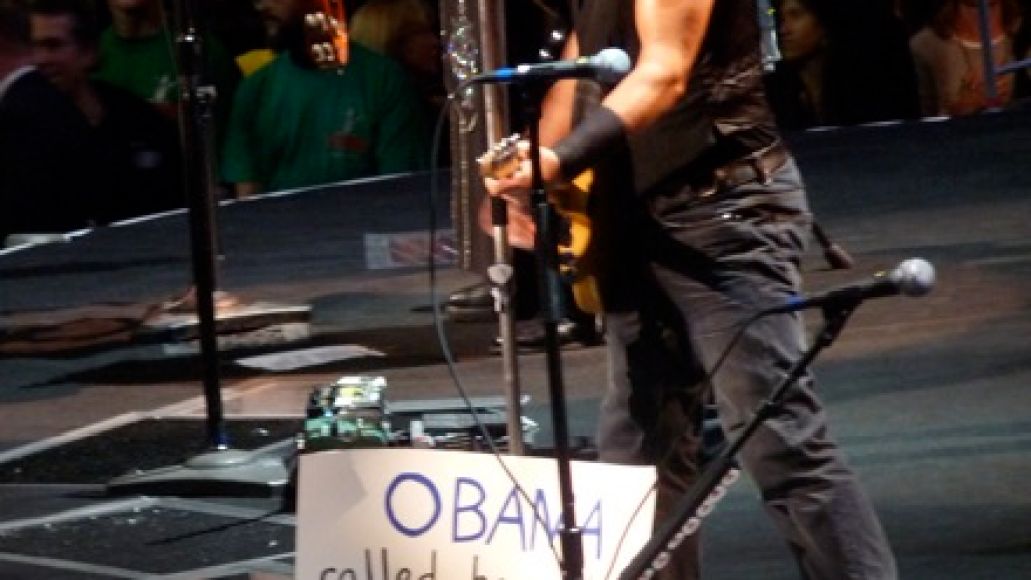