For most DC citizens, specifically fans of Ice Hockey, Wednesday night was one of hope for DC’s continually short falling sports teams. The Washington Capitals, favored to win the second round of the Stanley Cup Playoffs against their rival Pittsburgh Penguins, had fallen behind in the series and somehow sneaked into the series deciding game seven. With momentum on their side after a game six win, fans were optimistic about a game seven victory and advance to round three of the playoffs, one round closer to the cup.

Instead, the Caps fell the flattest I’ve seen any team fall in quite some time. Like watching a land bound fish slowly lose its life, the Capitals failed in almost every sense of the word, succumbing to the Penguins perfected offense and defense. They lost 6-2.

I was at game seven. I expected to see one of the best games of Hockey imaginable. But, despite the conditions, the showing might have been the worst game of professional hockey I have ever seen. How could a team with so much promise, with so much on their side fall so flat? At least it could have been a good game, even if it ended in a loss for the Caps.

That’s where the Portland, Oregon’s the Thermals come in. Leaving the Verizon center and heading over to DC’s Black Cat, the only optimism left in my system was reserved for the concert at hand. I expected a fun show, but was looking for nothing astounding. It’s hard to bounce back into the swing of life after such a devastating experience, but once Hutch Harris, Kathy Foster, and Westin Glass hit the stage shortly after my arrival, most of the Capitals’ lackluster performance was forgotten. The Thermals must have picked up all of the energy that the Capitals forgot in the locker room, because they were bursting with it. 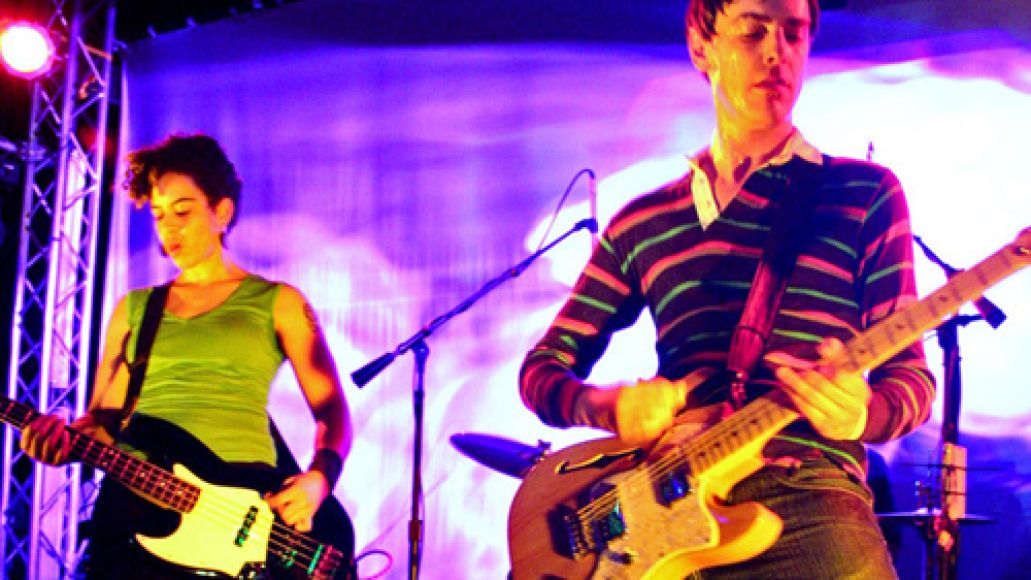 Wednesday night, it seemed that The Thermals were a near perfect remedy to a night that began with catastrophe. They brought forth the same clever, fun aura that is brilliantly captured on their studio records. But in the live setting, you learn a lot about the Thermals that you don’t get through your headphones alone. Hutch Harris comes across as the nicest guy to ever wield a fuzzed out axe and yell about the government. Kathy Foster is as cute an innocent as she is badass, quietly thanking the crowd when Harris was too tired to do so. And as for the new addition, Westin Glass, I don’t know if there’s a drummer with higher spirits. The guy was literally all smiles, standing over his set pumping up the crowd before each song’s drums kicked in, and eagerly slapping the hands of the front row audience members at the end of the set. This was a show lacking in pretentiousness from start to finish, and one high on quality.

Beginning with The Body, The Blood, The Machine’s “Returning to the Fold” Harris soared through one short garage-pop gem after the next, to an audience that knew nearly each tune’s every word. The band was flawless in renditions of standouts from each of their albums, in addition to two covers, bouncing along with the same great energy for the short set’s entirety. In addition to the band’s great sound and power, Harris made some of the best guitar faces I’ve ever seen. He and his bandmates certainly showcase their music and vigor well, but the process looks as fun for them as it does for the appreciative crowd. The three connect with each other, nodding and smiling through their songs. After each short jaunt, Harris looks winded and sighs with a wide grin. And Harris wasn’t afraid to show his gratitude for the crowd and venue. “I’m serious guys, I love DC. This is our third time playing the Black Cat, and every time it’s fuckin’ awesome.”

It would be stupid to dwell on each of the brief songs that made up Wednesday night’s 22-song set, since for the most part they all carry the same feel, and receive similar crowd response, but the biggest crowd pleasers were definitely TBTBTM’s momentous “Here’s Your Future” and the now seemingly distant “No Culture Icons” from 2003’s More Parts Per Million. But really, no song disappointed. The only possible downside to a band with such short songs is that it results an incredibly brief set, no matter how many songs there are. But really, the proper descriptor would be “succinct”. The Thermals packed them in tight, and didn’t leave much to be desired. Even the other Capitals fans who had also made the trip from the Verizon center to the Black Cat probably didn’t remember that their team had slumped so low until they looked at The Post the next morning. This show was simply too damn fun to care about much else.