While the buzz continues to build around Activision’s Guitar Hero spin-off, DJ Hero, another company already plans to capitalize on the market, too. Titled Scratch: The Ultimate DJ, the new game too focuses on a hands-on approach to DJ’ing, though with greater attention to realism, thanks to a partnership with turntable hardware gods, Numark. Much like Rock Band, Scratch gives Activision a run for its money, but for a good reason.

Despite Guitar Hero‘s brand name popularity, the quality of the games have been under heightened scrutiny, ever since original developers Harmonix bailed and created, Rock Band. Since the split, some have slammed recent Guitar Hero efforts, labeling it as a glorified Simon, instead finding solace with Rock Band, which appropriates itself with the actual instruments. History repeats itself, only it’s not Harmonix to thank this time around, it’s Scratch.

Some may have already heard of Scratch; they recently sued Activision over shady dealings with one of their developers. Nevertheless, not even corporate espionage has seemed to hurt Scratch‘s edge. The game looks to have a clear one up on the simpler DJ Hero. Numark has designed the Scratch peripheral, Scratchdeck, from the ground up, using all of their actual turntable know-how and parts. In fact, they’re calling it “the first and only legitimate DJ controller for gamers.” Unlike the three button and one fader option for DJ Hero, Scratch’s turntable is buttonless, accompanied by a side panel with a crossfader and five Akai Pro MPC drum pads, color-coded in the familiar red, blue, yellow, orange, and green. 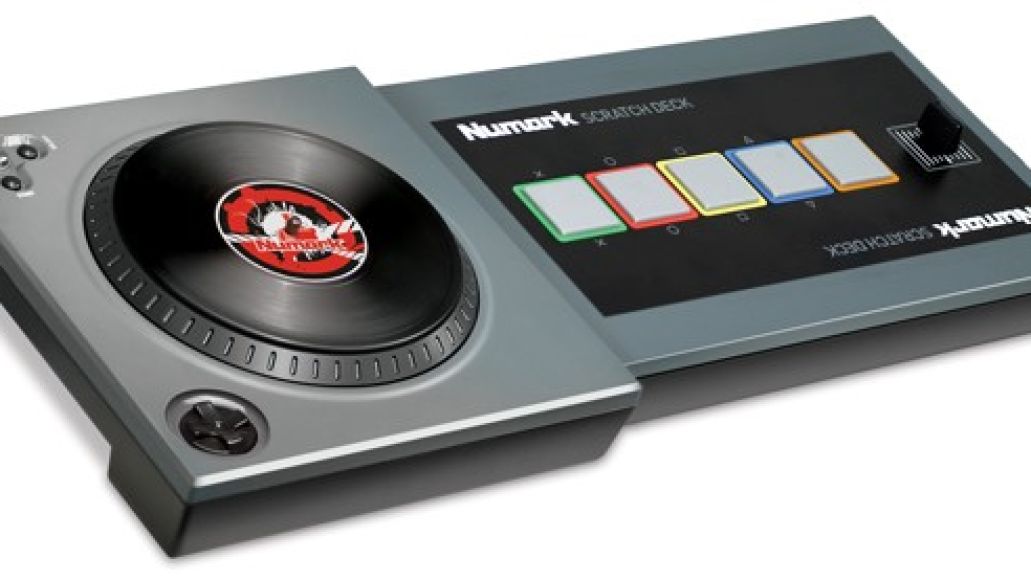 Having more buttons than DJ Hero not only promises more complicated gameplay but also more realistic techniques. Numark emphasizes that you need more than a crossfader and a turntable for the “true feel of hip hop” and integrates the MPC drum pads into the gameplay. DJ Hero‘s focus seems to be exclusively on performing their preset mash-ups, hence the two crossfaders. For Scratch, the use of the turntable with the crossfader allows for the player to perform hundreds of real DJing techniques to the extent that Numark claims you’ll be able to graduate your skills to the real thing or vice versa. There’s a strong feel of legitimate improvisation within Scratch‘s format, too. Players can work their own beats into a track, and as long as your beats are on, they’ll not only count, but you’ll earn extra points for improvisation. The same goes for scratching outside of freestyle sections.

What’s more, Numark isn’t the only big industry name associated with this project. Scratch‘s production has been overseen by the Beastie Boys’ Mix Master Mike and major hip hop producer Quincy “QD3” Jones III. It might just be Numark’s hype machine, but I’ve gotta say, if you’re thinking about picking up a DJ game, Scratch looks like the one that means business.

Check out Numark’s debut video for Scratchdeck and see for yourself:

Can Numark's Scratch kick DJ Hero to the curb?