It’s officially summer here in D.C. While it’s not quite August hot, the humidity has sloshed its way forward, just in time for the pools to open up. This past Monday night was a warm reminder of the 80-degree sun that hung earlier, and the kids were out to play in the mild city night, selling out the 9:30 Club. The bill brought out a tag team of some of indie rock’s finest with the awkward new kid, Here We Go Magic, and the rising stars, Grizzly Bear.

Brooklyn openers, Here We Go Magic, garnered some buzz in the crowd, which isn’t much of a surprise, as their debut record is one of this year’s best. Having been written and recorded by Luke Temple as a solo act, the project quickly became a band out of necessity. Fortunately, instead of the new ensemble being like that first roommate in college, it ended up being like finding long lost friends. This made their live show very tight, and turned more than a few heads as people streamed in. 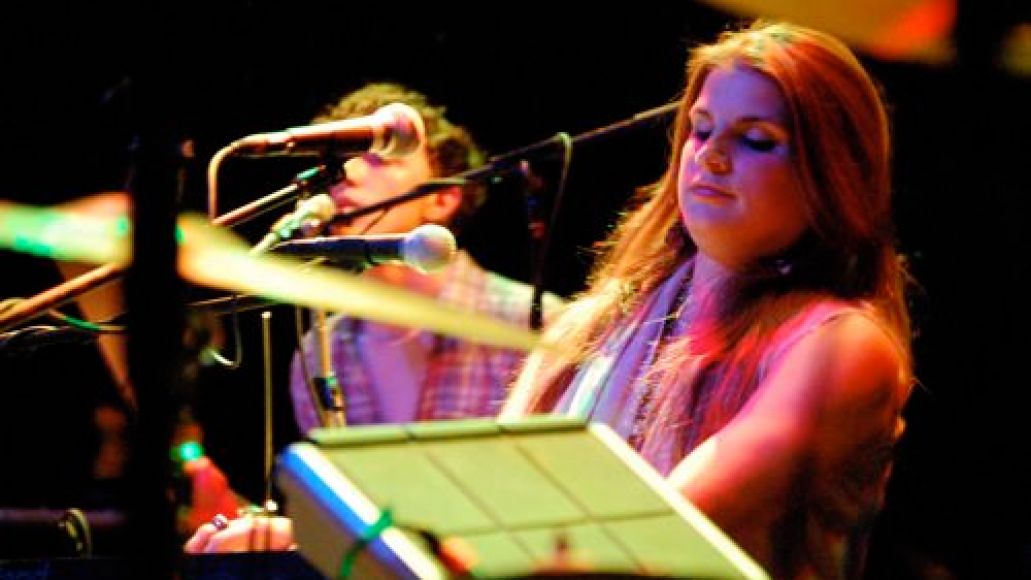 Temple and Co. kicked off the opening night of the tour with the wide-eyed and appropriate “Everything’s Big”. The song started the night off slowly, and with only a handful of tracks in their repertoire, the band was able to stretch out every moment of this song, and the rest. The music gave a sense of traveling as it worked itself up into a frenzied finish. “Pieces of Me”, the opening track from their debut, turned out to be much more explosive, and less tribal, with the keys grabbing the focus. The other big highlight from their set came from Temple’s falsetto with “Tunnel Vision”, taking them from subtle spacey folk to a “hey, who is that band” finish that closed the set with a big response from the audience. Not bad for a band who only three months ago was just two people and an acoustic guitar.

After a quick turn over, Grizzly Bear modestly walked out to a packed house. The set up was simple with each member lined up against the front of the stage, and backed by an elegant beaded curtain and a rainbow of L.E.D.’s to help paint the night. They kicked things off with key tracks from their latest record, Veckatimest, starting with “Southern 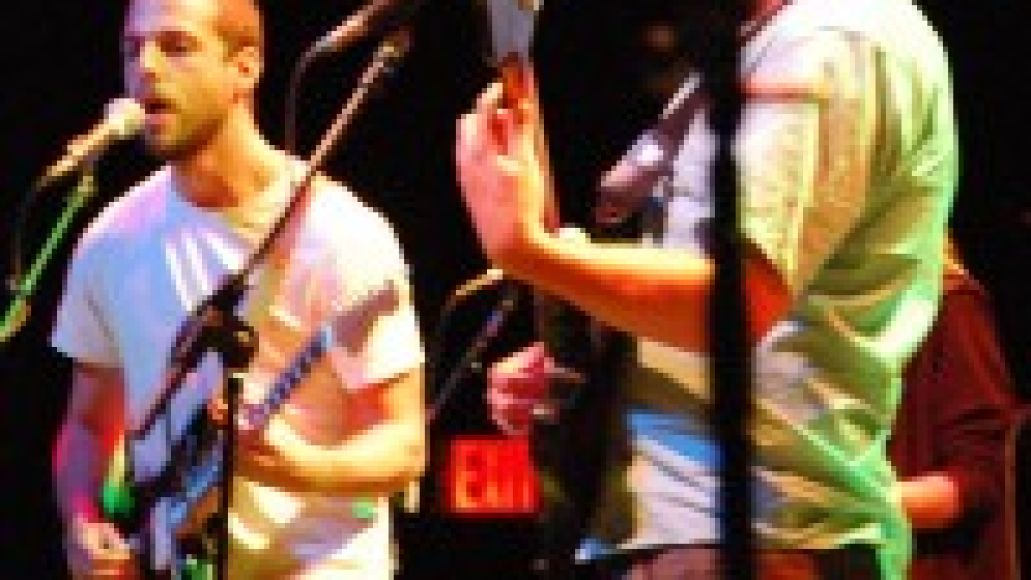 Point”. From the get go the audience was in the mood to move which came off as a surprise since the music doesn’t necessarily lend itself to dance. Then again, songs that might be a bit sleepy on the albums grip you and pull you in with their charm. The band was a little surprised too as they made comments throughout the night about the energy level, although it could have been the cupcakes the club was handing out earlier in the night. “Knife” made an early appearance providing a perfect campfire sing-a-long moment. The audience almost jumped the gun on the opening verse which put a smile on singer/guitarist Ed Droste’s face as they drew things back, letting the audience carry the tune all the way through.

The vocals were spot on as Droste and Daniel Rossen crooned away on “Fine For Now”, and the Beach Boys throw back “Two Weeks”. There were lots of “I love you”’s and one “can I have your baby”’s (from a guy) as the audience begged for more and the band kicked into their back catalogue for a few numbers. For songs that could have easily been lost in a live setting, it was great to see them become more with the band, commanding the stage feeding off the audiences sugar rush. Chris Taylor took on his role as the bands’ multi-instrumentalist, juggling woodwinds and bass duties as on songs such as “Foreground” which all translated wonderfully. At the end of the night, the guys were called out for one last number that was picked out of the onslaught of requests. The winner? “He Hit Me”, which capped a long set that carried just over an hour and a half.

It was a great evening for music, one that brought out all walks of life, but no one seemed more excited than the very pregnant woman who treated the bar top as a drum kit the whole night (think that kid will be born with extra tight pants already on?). By the end of the show, all expectations had been shattered. Fans left with smiles on their faces and an appreciation for a new band that went above and beyond the duties of a warm up act. While Grizzly Bear is already at full steam, Here We Go Magic is just getting started and it wouldn’t be a surprise to see them come around for their own tour as their record picks up. In the end, it’s just another lesson that you should never underestimate the opening act, or the headliner for that matter, too. 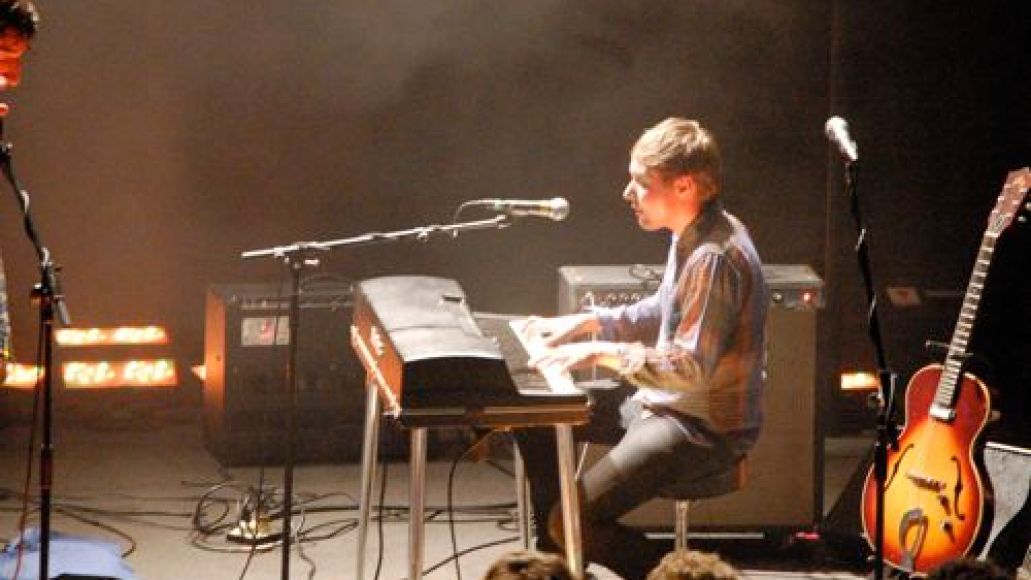 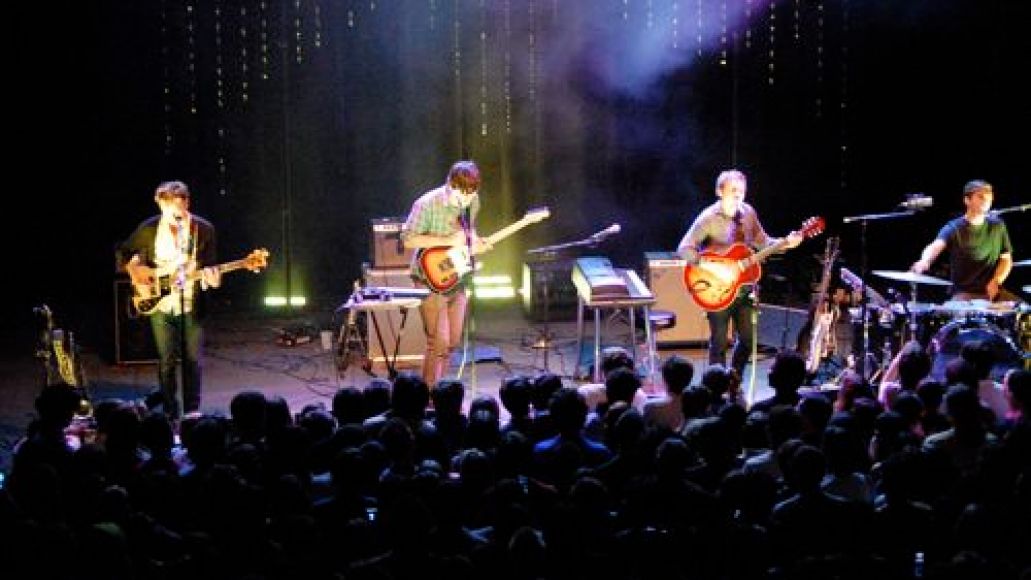