Depending on how you look at Monday night’s Patrick Wolf show, it was either a bargain or a test of endurance. For a moderate ticket price, the evening, sponsored by Nylon magazine’s new record label, boasted three openers and then Wolf as the headliner. From the time the first note sounded through the Bottom Lounge until the house lights went out, fans heard nearly three hours of music and stood for five.

First up was Jaguar Love, a Portland, Oregon duo comprised of frontman Johnny Whitney and guitarist Cody Votolato. I’ll be the first to admit that screaming vocalists do very little for me, especially when they sound like MGMT’s Andrew VanWyngarden shrieking for dear life. So, in fairness, the band was going to have a difficult time winning me over. Still, Whitney seemed preoccupied with strutting around the stage as if he were heir to Mick Jagger’s throne, while Votolato attacked his guitar with admirable energy. The two were backed by prerecorded beats for every song, and the frustrating part was that the music sounded interesting. It had a frantic energy to it, and might have even given way to some catchy hooks, had it not been for the distracting singing on top of it. 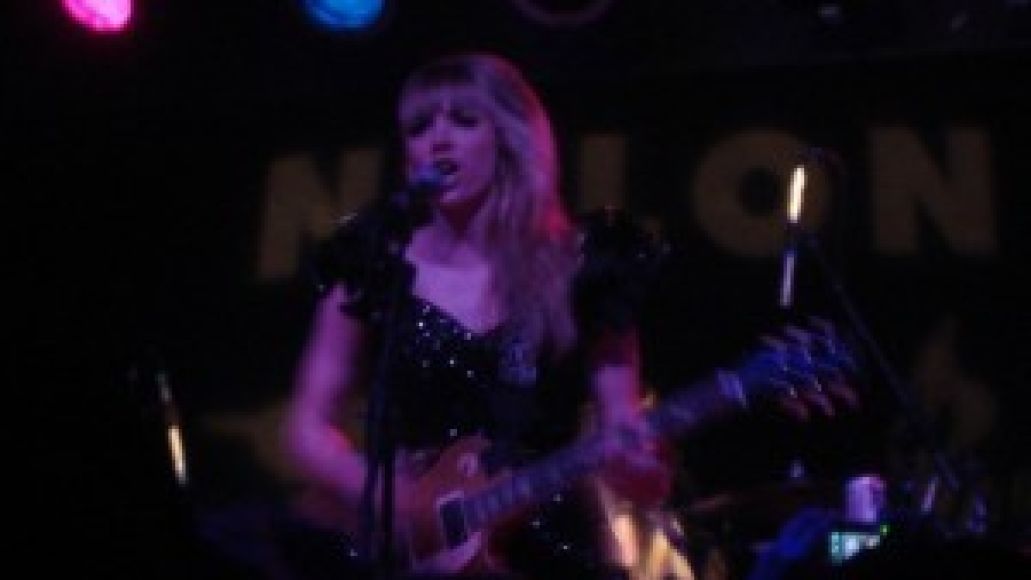 Paris-based Plastiscinestook the stage next and immediately provided a stark contrast to the American Apparel appearance of Jaguar Love. Plastiscines are comprised of four females, three of whom evoke 1960’s Nancy Sinatra’s with their puffed up hair and vintage attire. The band’s sound is a cross between the rock of The Donnas and the alternative party attitude of The B-52s. On certain songs it was easy to write the band off as just another four-piece garage rock band with a record deal (who happened to sing an occasional French tune), but then on the next song the group flashed some originality. The set closer, “Barcelona”, proved to be a lively lovesong to the titular locale, and let lead vocalist Katty Besnard show just how smooth her voice is.

The final opener was Living Things, who are doing their damnedest to fill the void in college prep garage rock that The Hives and The Strokes left behind. Frontman Lillian Berlin did the disinterested vocalist act pretty well, and the rest of the band stuck to the simple three-chord template without faltering. Nothing in the 30-minute set was original, but none of it was bad either. It was just there. Part of the blame goes to the night’s 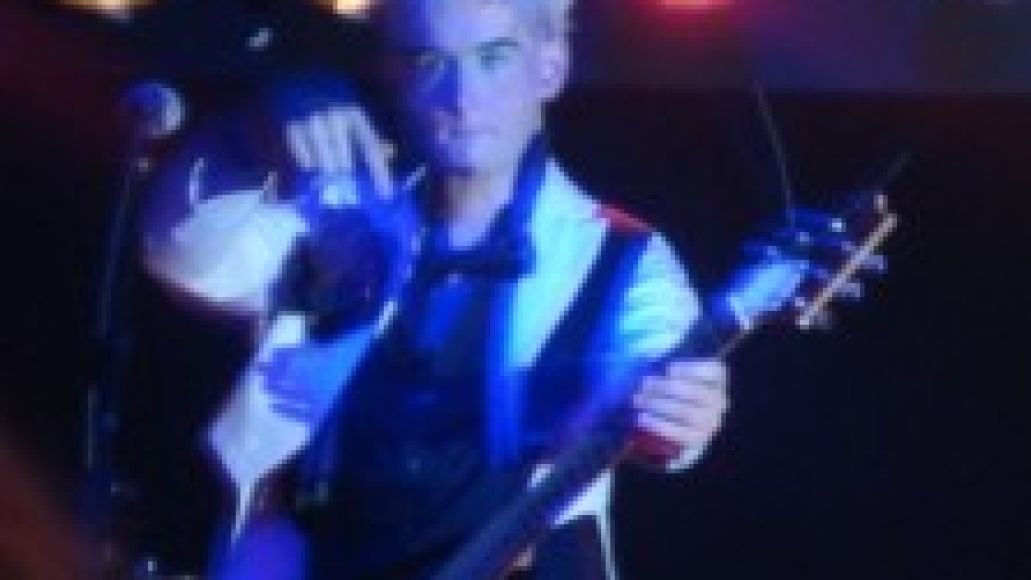 sound engineer who mistook loud for better. At times the music was just so amped up that, yes, you heard everything and your drink was rippling from the bass, but all nuance was gone. On record, the band’s lyrics rise above the genre and help make interesting music. Live, it was all lost in translation.

Finally, at 11:20, long after the 7:00 time on the ticket, Wolf’s band-comprised of a violinist, a bassist, a drummer and an electronics guru-walked onstage. The opening sirens of the brief “Kriegspiel” blared over the speakers and Wolf marched out in white tuxedo jacket over his bastardized black suit. The South London native’s bleached hair was paler than his powdered skin, and his eyelids were adorned with glittery green eyeshadow. The song then faded into “Oblivion”, a track off of this year’s excellent The Bachelor. Strapped with a Flying V guitar, this was obviously a more rocking Wolf than last came to town in 2007. Backed by his band, Wolf sounded like someone who was finally allowed to burst out of the confines of a recording studio. His albums are consistently strong and intricately produced, but live he’s not afraid to let sounds bleed together and perform some vocal acrobatics.

On “The Bachelor”, the Celtic rhythm that drives the song became a screeching, nightmarish folk song that you could almost dance to. Wolf played the piano while his drummer pounded away like he was calling for war.

The set mostly drew from The Bachelor, though he did give a few nods to each of his earlier efforts. “The Libertine” and “Tristan”, both from his breakout 2005 LP Wind in the Wiresproved to be crowd favorites. They also had a distinctly more aggressive tone than before. Where his earlier 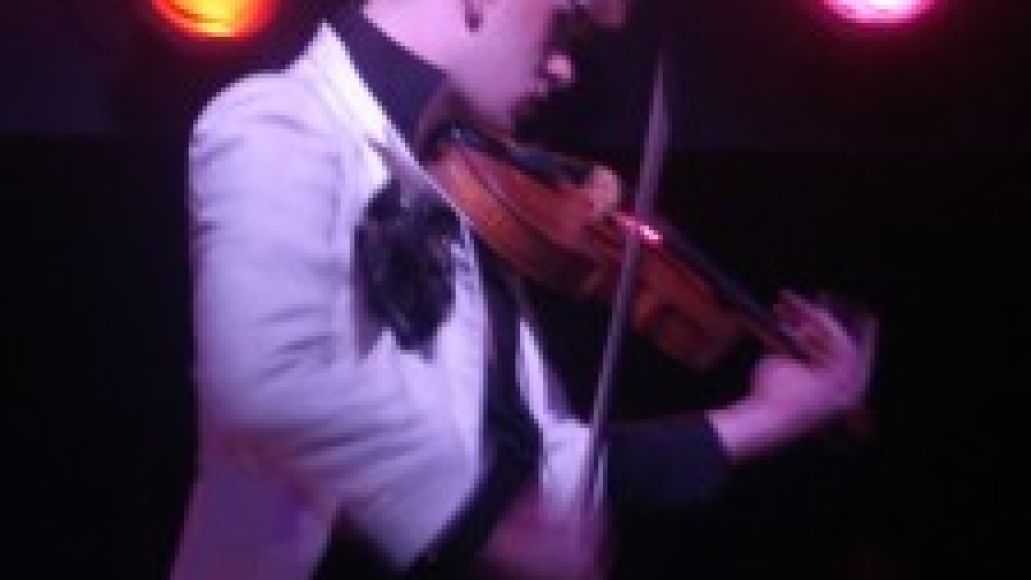 performances and records were something in the electro-acoustic vein, on Monday night he was a rocker who happens to use strings and digital samples.

Watching the audience, who was comprised of many undergrads with X’s on their hands, I realized that much of his theatrics translate much better live than on record. Rallying tunes “Battle” and “Vulture” are two tracks I singled out as trying too hard previously, but live they filled the crowd with a strange hopeful energy that is normally reserved for the universal anthems of U2 and Coldplay. Wolf is obviously not aiming for this same demographic, but he’s tapping into a left-of-mainstream demographic looking for someone who can revel in his own loneliness as much as he revels in unbridled joy. The clap-happy “The Magic Position” is a childlike romp that’s nearly saccharine, and yet it came only 15 minutes after he sang “The Libertine”, which describes self-mutilation and rape. All while wearing glitter, mind.  As he strutted across the stage, vamping for the audience that sang along to every word, he proved that an artist can explore different facets of their personality and the fans will follow.