This past weekend, our resident hip-hop guru, Michael Denslow, traveled to the Motor City to take in the sights and sounds of this year’s edition of Rock the Bells. His experience follows…

Rock the Bells evokes mixed feelings among many hip hop fans. On the one hand, the festival is notorious for delays, cancellations and shortened set times. On the other hand, you simply aren’t going to find this many great rap acts on one stage anywhere else. I attended the second show of the tour at the DTE Energy Music Theatre in the north suburbs of Detroit on Sunday. While I usually refrain from writing concert reviews in a chronological style, I feel this is the best way to capture the scope of this festival:

Pre-Show:
Concertgoers at the DTE Energy Theater were greeted at the entrance with signs announcing Busta Rhymes, scheduled to be one of the events headliners, had canceled his performance for the day. To the credit of the organizers and the venue, refunds were offered at the door, but it was still an ominous start to the day. As it turns out, Busta skipped the show to attend the BET Awards. This is a legitimate enough excuse, but one that seems could have been handled a little more in advance. At the very least it would have been nice if GU could have pulled Raekwon, GZA, or someone else off the Chicago lineup to take his place. As it was, they just started the show a little late.

The Knux:
I wasn’t a big fan of The Knux‘s instrument-driven, misogynistic debut, but it seemed logical that their music would translate well to the stage. But for whatever reason The Knux opted to play with just a DJ. The lack of a live band was a glaring omission at a festival that has seen live instrumentation added to a lot of acts who didn’t really need it (Wu-Tang comes to mind) over the years. Still, the New Orleans MC’s did a decent job holding down the stage, no small task for an early-day set in front of a nearly empty amphitheater.

K’Naan:
According to the listed set times (the updated listed set times at that), Chali 2na was to take the stage next.  Instead, K’Naan strode out to the opening chords of “In the Beginning”. The Somalian-born rapper continued to stroke his surprisingly large ego, claiming his music to be “the freshest sound you’ll hear all day.” And in a sense he was right. The Rock the Bell lineup is perpetually full of artists who were making great music last decade, or at the very least have a style that sounds like they should have been making great music last decade. K’Naan stands in opposition to this, representing hip hop’s transformation into a global genre. And the fans, most of whom did not appear to be familiar with his music, responded enthusiastically to his politically-charged lyrics, joining in the sing-along on set closer “Waving Flag”.

Slum Village:
Slum Village may have been an opening act, but the hometown fan base was clearly represented in Detroit. A large group of fans (relatively speaking) filled up the front and center of the venue, waving their hands and rapping along with the legendary J Dilla’s one-time group. 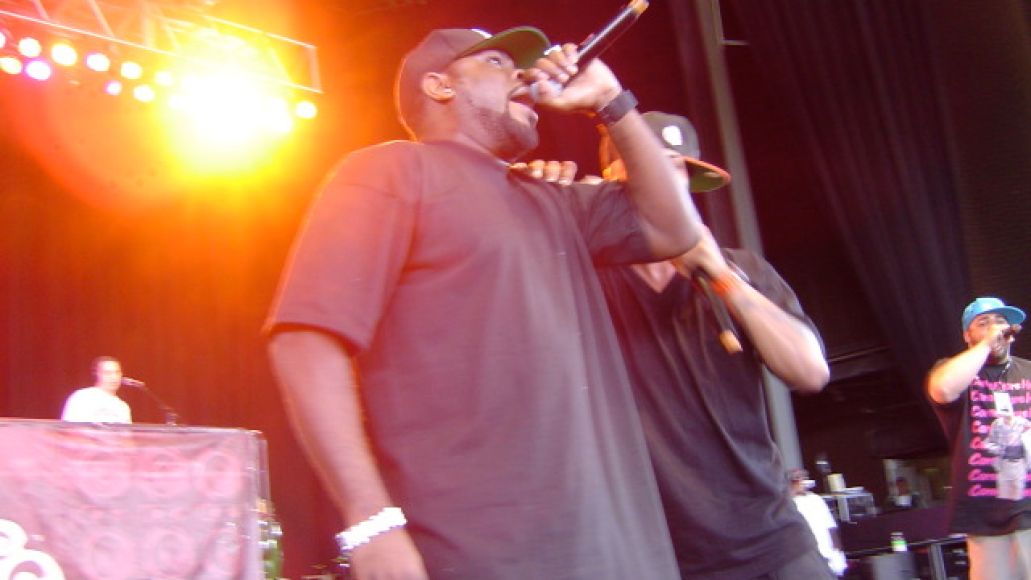 These guys are straight up rappers. In my Rock the Bells preview I called them the best MC collective since Wu-Tang Clan. After seeing them perform I stand by my claim, though their lyrical prowess did not exactly translate that well to a large stage, especially a large stage in a nearly empty venue. Perhaps they knew this and it explains why they spent probably ten minutes in an a cappella cipher. Or maybe ciphers are just their thing considering, you know, they are so damn good at it.  Regardless, it was easily the best part of their set. Slaughterhouse also gets bonus points for some of the most entertaining artist banter of the day, dropping gems like, “Give it up for Royce da 5’9″…holding it down for Detroit…if [he] ever grew an inch he’d be fucked,” and “Everyone put a peace sign in the air for Michael…I’m going to put a middle finger in the air for that lying little kid.” 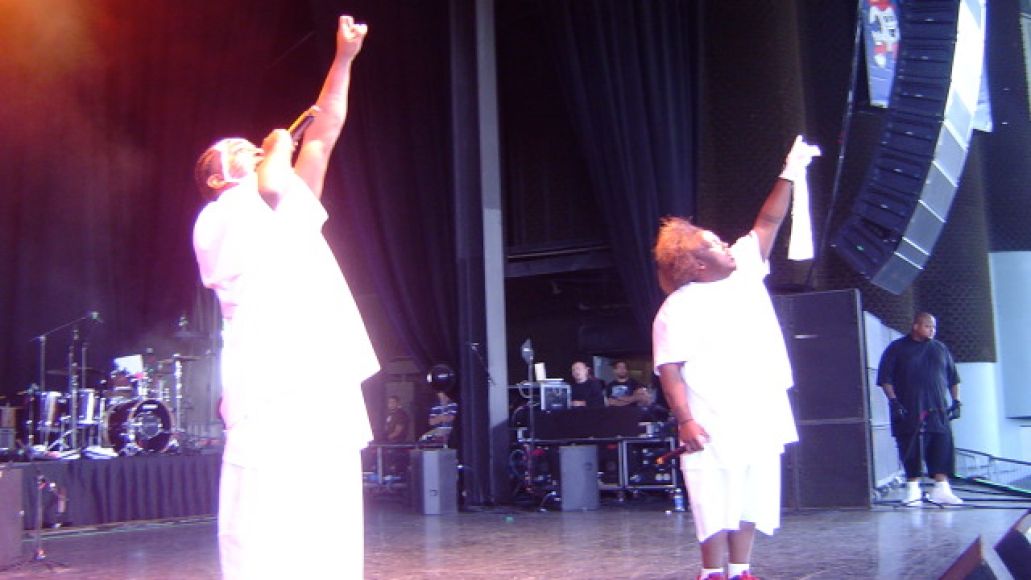 Here is a fun fact. Last year, Kansas City rapper Tech N9ne was the third highest grossing touring artist in hip hop, trailing only Jay-Z and Kanye West. I know, right? It’s not all that surprising when you consider his legions of fans. I can’t lie. I own none of the guy’s music and I don’t really see that changing anytime soon. But he put on a pretty entertaining set and he wore face paint and it turns out those are the two things I look for when I don’t know any of the songs. Also, I saw him a couple hours later in the deserted food area just having a bite to eat with a few people…and he was in full makeup! 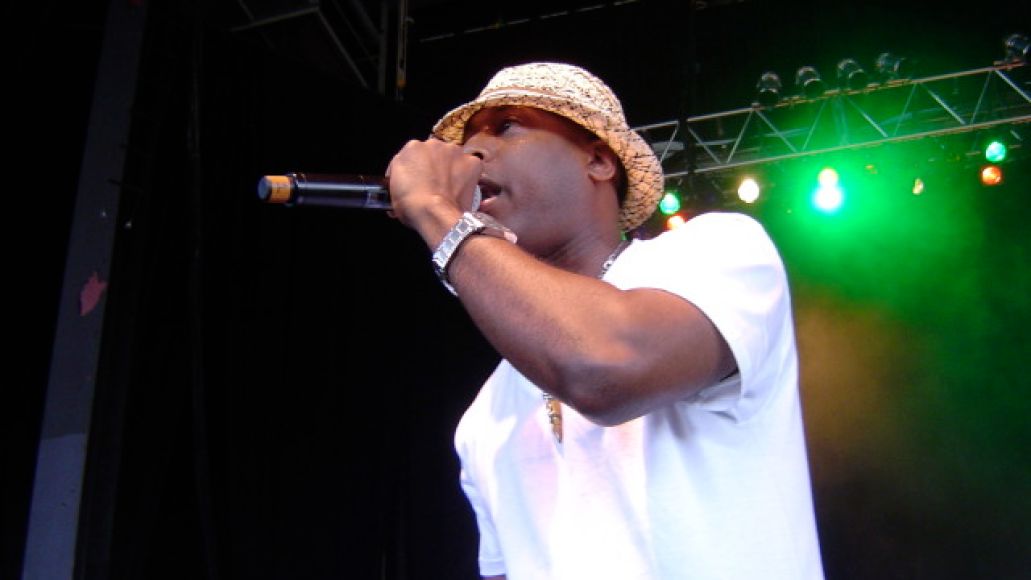 Reunited with Hi-Tek, Talib Kweli put on a set that was a whole lot like the sets he puts on without Hi-Tek.  He was perhaps the first artist of the day to come across unmotivated, forgivable given the small crowd.  The set was obviously high on music from the duo’s aged debut album, including “Move Something” and “Too Late” among others. They also touched on new music from their upcoming second album. But like usual, the best crowd reaction was saved for “Definition”, “Get’em High”, and “Get By”. Still, even the latter, usually one of the best live hip hop songs, came across a bit flat, as Kweli half-heartedly sleepwalked through the whole false start routine. 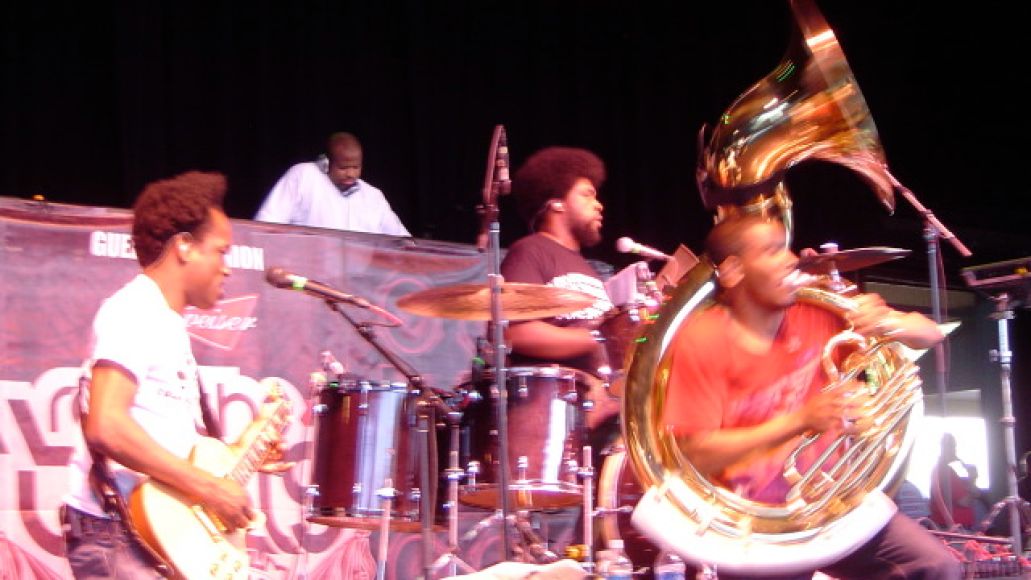 Perhaps it is just me, but it seems that the Roots hour-long set was shockingly low on covers. Maybe with the late night gig and the decline in tour dates they are just welcoming the opportunity to perform songs they wrote themselves. And I have to say, as much fun as their trademark jam sessions are, it was really nice to hear them delve into their back catalog to play songs like “Respond/React” and “Proceed” along with live staples like “Star” and “The Seed”.

Big Boi:
The nice thing about rappers is that, for the most part, they know what the crowd wants to hear. Big Boi spent very little time previewing material from his upcoming Sir Luscious Leftfoot, electing instead to please the audience with just about every single OutKast ever recorded (aside from the strangely absent “B.O.B.”)  He even dug a little deeper on “Da Art of Storytellin’ (Part 1)”.  Still, as much fun it was to hear these songs live, the performance just increased desires to see an OutKast tour, or at least that new album Big Boi kept promising throughout the show.

Nas & Damian Marley:
I am continually amazed by Nas‘s stage presence. He seems to get better every time I see him, bringing a level of intensity and emotion that is nearly unmatched in the genre. The last three times I saw him he performed solo, with no hype man or band. It was just DJ Green Lantern, Nas and one mic. Queensbridge’s finest was able to hold down an empty stage better than anyone I have ever seen. But on Sunday he had a full band, along with what could be called the greatest hype man of all time in Damian Marley. 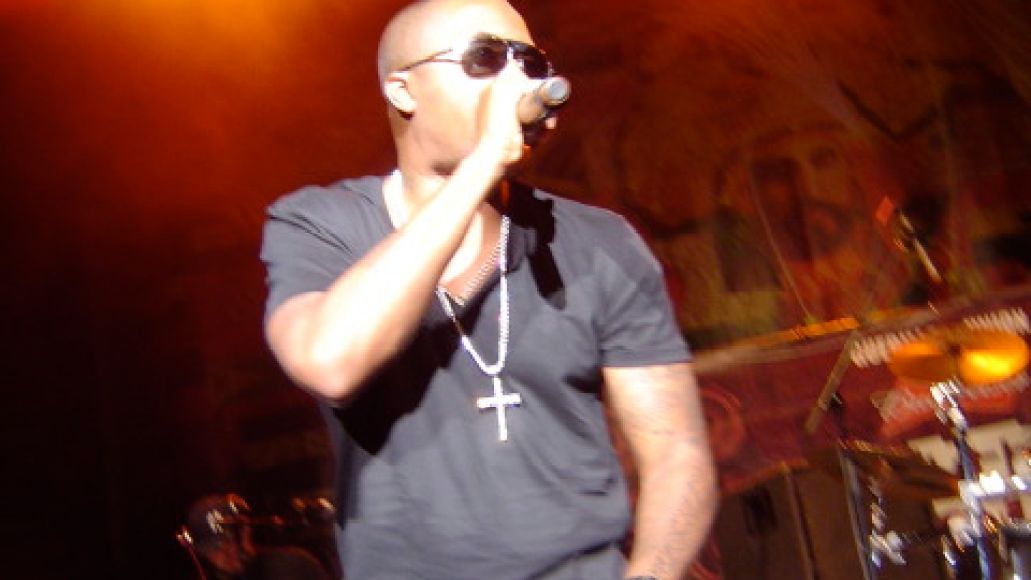 Nas went on first, bursting onto stage as the band played the opening notes of “Hip Hop is Dead”. He proceeded through his typical Illmatic medley, finally bringing Damian Marley (and that flag waving guy…I wonder if it is the same guy every time) onto the stage after four songs. Nas continued through his hits with Marley helping him out and lending his own flavor to the songs.  There were too many great moments to name. Nas’ “One Love” ended by breaking down into a reggae beat and transitioning into Bob Marley’s “One Love”. “If I Ruled the World” was an emotion-packed sing-along with Nas commenting on Michael Jackson being in a better place. Eventually, Nas took a break and left Marley to perform his solo material. He slowed the tempo of the show down a bit, mixing covers of “War” and “No More Trouble” in with some of his slower songs. It all lead up to the rollicking “Welcome to Jamrock”, which got the crowd as live as it had been all day.  So far.

The real party was going on up in the lawn and the concourse separating it from the seats. I learned this when I left my seat and headed for the back, (mistakenly) assuming the show was just about over. That’s when Nas raged back on stage and tore into “Hate Me Now” and everyone just started going bananas. The entire concourse was a dance pit. B-boy circles broke out all over the place. It was pure joyful mayhem. And that was before the triumphant flourish of “My President” drove the crowd into a further frenzy by bringing back memories of another timeless night seven and a half months before. And that was before he ripped through “I Can”, “Made You Look” and “One Mic”.

The show wasn’t over yet. Marley returned and the two performed together on “Road to Zion” and a song from the new album. The mellower songs offered the crowd a chance to catch its breath before a short walk to the parking lot (let’s face it….everyone was parked pretty close…sorry, just had to get one more cheap shot in.) All in all, the set checked in at close to ninety minutes, long by hip hop standards and unheard of by Rock the Bells standards.

Final Thoughts:
My problems with Guerilla Union and the Rock the Bells festival have been well documented in the past and I’m sure I will have more to say on some of these issues in the future. Instead, I chose to focus this review on the music and I have absolutely no major complaints on any of Sunday’s sets. All qualms aside, it was an incredible day of music. The crowd was small but the vibes were good. Most importantly, there were no major delays and every act played its full set time. This seems to be a huge step in the right direction. Let’s just hope there is enough interest around the country for the festival to continue moving forward.

Rock the Bells brings the hip-hop to Detroit (6/28)