If the crowd at St. Vincent‘s show at the Metro learned anything on Sunday night it was that: a) Cheerful people can make startlingly dark music and b) some of the year’s best music is in fact startlingly dark.

Philadelphia’s Pattern is Movement opened the show with a 30-minute set that quickly won over the polite audience. Andrew Thiboldeaux and Chris Ward melded the smoother elements of jazz with the self-deprecation of indie rock. Thiboldeaux possesses a smooth voice that could easily sing ready-for-radio soul. His simple keyboard work also recalled the no-nonsense appeal of classic R&B that emphasizes the pain of a broken heart. With his eyes squeezed shut and sweat dripping from his brow, Thiboldeaux did just that. His passion was matched, however, by Ward’s drum clever work. While Thiboldeaux provided all vocals and keyboard work, he occasionally turned to bang on a drum of his own. Ward spent the entire set working his kit, alternating between soft taps and pure rage. Often the two members seemed to be on different wavelengths, which produced an interesting result because instinct told one to bob their head to the rhythm, while one’s heart broke just a little at the sound of Thiboldeaux pining over lost love.

Between songs, Thiboldeaux graciously thanked the audience, and St. Vincent for the opportunity to tour. His sheepish smile and embarrassed tone made him sound like a teenager fronting a garage band that’s playing its first show. It was nice to see a band sincere in its appreciation and not acting too cool to enjoy the moment. Of course, after every endearing comment, he’d move into a new song and the sweetness disappeared behind a painful tale.

After a quick set change, St. Vincent (aka Annie Clark) strolled on stage with her band mates with little 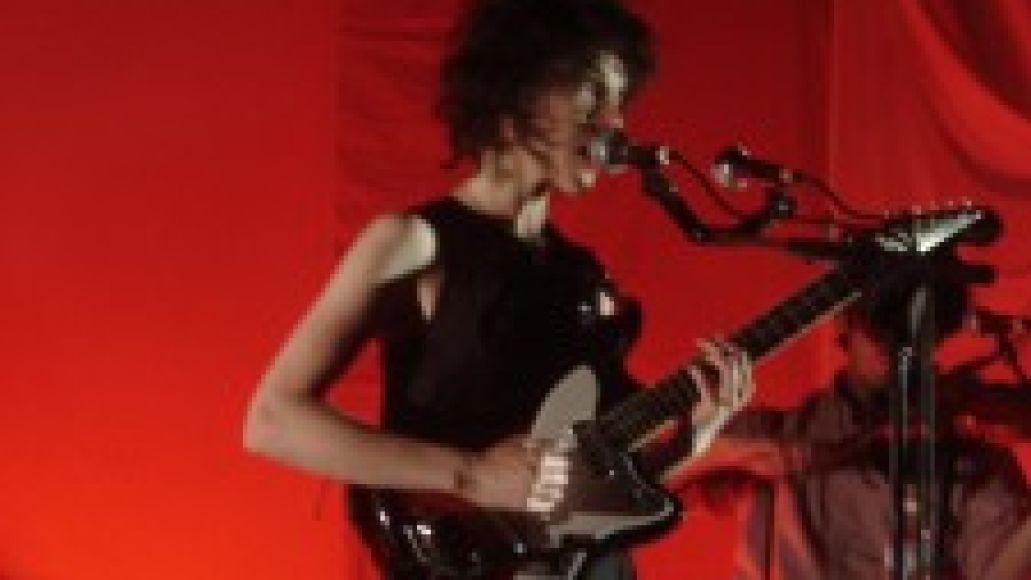 fanfare. The stage lights were down but no exciting music heralded their arrival. Clark strapped on her electric guitar while her violinist, drummer, bassist and woodwind multi-instrumentalist tuned up. Then with quiet strums she began to play “Marry Me”, the title track from her debut LP. She softly crooned the tune with an emotionless face until she got to the fan-favorite line, “Let’s do what Mary and Joseph did/Without the kid”. She then stopped, let the crowd holler, said, “three cheers for irreverence!” and continued the track. That moment signaled the struggle between macabre and playful that was to come for the rest of the evening.

“The Strangers” followed and was the first time Clark exhibited her shredding skills. Although you can tell she’s a skillful guitarist on her albums, you never get to hear the power of her fingers. Live, she’s not afraid to let loose. During the guitar breakdown on “The Strangers”, and on several songs throughout the night, she backed away from the microphones and arched over her guitar, raising her leg and convulsing her neck like an ostrich (a particularly talented one, of course).

From a visual standpoint, Clark was the perfect centerpiece for the stage setup. Behind Clark and her band hung three white linen panels that reflected the lighting’s revolving series of primary colors. Her pale skin, dark hair and slight frame dissected by her guitar were haunting silhouettes to a simple but effective light show. Clark often stared out at the audience with wide yes. She seemed shocked – at the words coming out of her mouth, at the anger in her voice, as the cruelty of the men she sang about. As strong as her lyrics are, her face did an even better job of telling her stories.

For the setlist Clark pulled heavily from this year’s standout Actor, but continued to draw upon the best Marry Me tracks. A solo rendition of “Paris Is Burning” was miles ahead of performances she did in 2007. Her confidence as a performer has grown, which is reflected in her stronger voice and willingness to let silent moments hang in the air. She also knows how to alternate between a standard microphone and a distorted one to act as her own call-and-response.

The 70-minute set never lagged, and I can’t say that about many shows. There’s normally a moment when one song could have been taken off, or played at a different spot, but the sequencing was flawless. Some of Actor‘s standout tracks went from mysterious to outright violent, as was the case with “Laughing With a Mouth of Blood” and “Black Rainbow” and their angry guitar work. 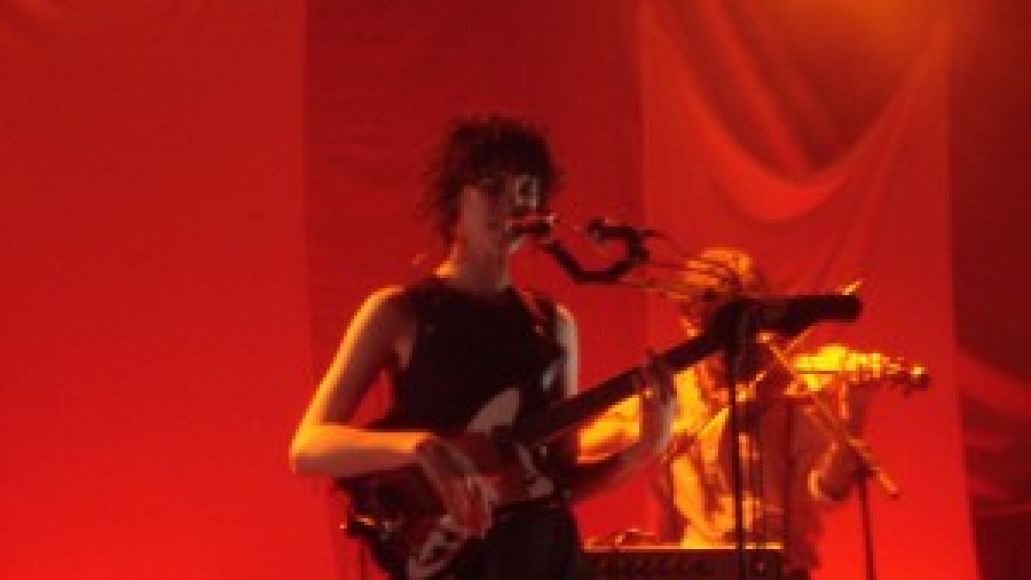 “Marrow” was already a quasi-dance number on the album, but live it had the all-ages crowd bouncing up and down. “Just the Same But Brand New” became a sweeping epic that ended with the entire band rocking out like they were going to smash the amps. The band came back for an encore that concluded with “Your Lips Are Red”. The song was always a rocker, but that night it became a stadium jam. Clark created a new groove for the song based on her guitar’s shrieks. Midway through, she was kneeling on the ground racing her hand up and down the neck of the guitar, her drummer flailing her arms, the violinist ferociously dragging his bow and her saxophonist ready to pass out. The lights flashed like strobes. The Metro was engulfed in a cacophony of distortion. Then it was over and the stage was dark.

The house lights came on and she flashed a childlike smile as she thanked the audience. Then, the band hurried off stage and all that was left was the backdrop of unassuming white cloth that just moments ago was bathed in demonic red. A fitting transformation for the evening.